After romping home with the largest number of seats in Italy, Matteo Salvini said his victory – along with that of Mr Farage in Britain and Marine Le Pen in France – showed Europe was changing.

When combined, the tallies of Mr Farage’s Brexit Party, Mr Salvini’s League party and France’s National Rally helped deliver the highest number of Eurosceptics ever to the European Parliament.

On a dramatic night, it emerged that the centrist coalition that has dominated EU politics for the past 40 years had been given a drubbing in the European elections.

For decades the two main blocs have operated a ‘Grand Coalition’, but on Sunday night it lost its majority and will need to rely on fringe parties.

Speaking in Rome yesterday Mr Salvini pledged to continue the charge with ‘even more energy, passion and dedication’.

He said he was counting on the Brexit Party’s MEPs to join his Europe of Nations and Freedom (ENF) group in order to swell its number up to 150 and rock the European establishment. Many believe he faces an uphill struggle to reach that figure, but yesterday he insisted it was possible if ‘everyone can overcome jealousies, sympathies and antipathies’.

The group had only 36 at the end of the last parliamentary term and Mr Farage sat in a separate group, the Europe of Freedom and Direct Democracy Group. 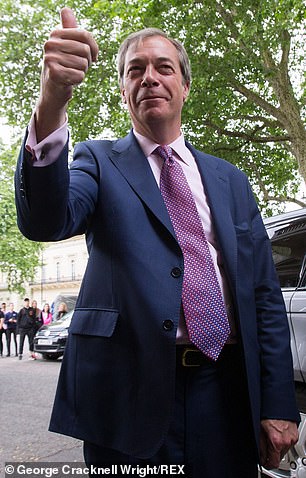 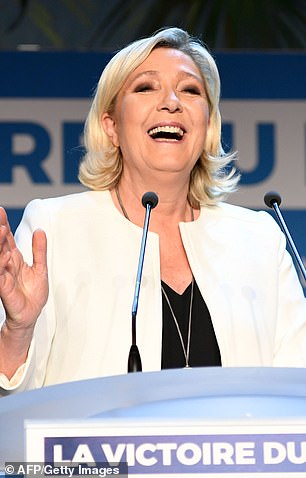 After romping home with the largest number of seats in Italy, Matteo Salvini said his victory – along with that of Nigel Farage (left) in Britain and Marine Le Pen (right) in France – showed Europe was changinh

In addition, the MEPs of Poland’s ruling Law and Justice Party, which made gains, would be needed, but they have previously declined to join Mr Salvini’s coalition.

Mr Farage has not yet ruled out joining Mr Salvini but it is thought he would be unlikely to do so, having founded the Brexit Party partly to escape Ukip’s increasingly extremist direction.

It is also thought that some of his MEPs, who come from Left-wing backgrounds, would be against joining a Right-wing alliance. Mr Farage has ruled out joining forces with Miss Le Pen in the past.

Yesterday a Brexit Party spokesman said it was too early to draw any conclusions about which parties it would join forces with.

He added, however, that because the party had the biggest delegation of MEPs – 29 to Mr Salvini’s 28 and Miss Le Pen’s 22 – it was more a question of ‘other people joining us’. The Brexit Party has the joint-highest number of MEPs of all parties across Europe. 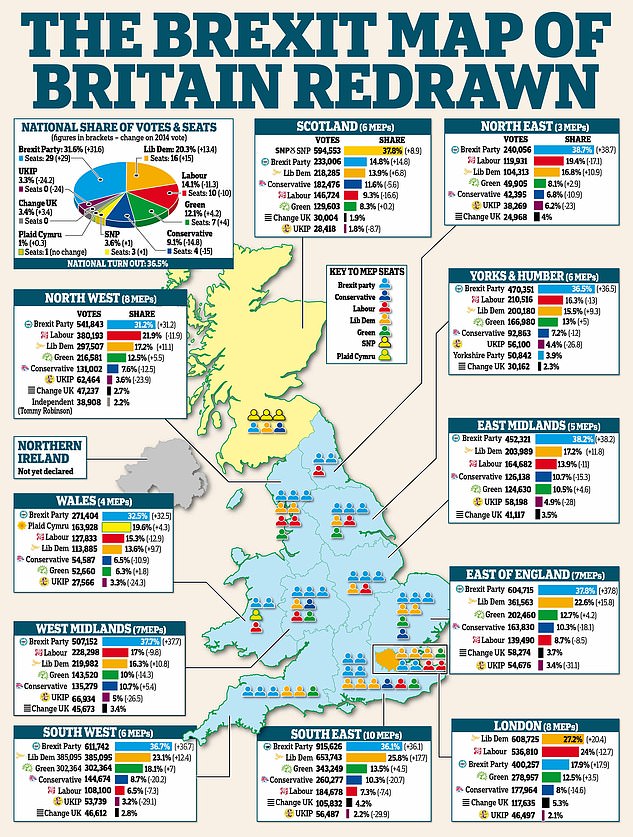 Following the official declaration of results yesterday the parliament now has around 184 Eurosceptic and reformist MEPs if Mr Orban’s are included, up from 155 at the last elections in 2014.

The increase helped break the majority held by the two largest centre-Right and centre-Left groups of parties for 40 years. Gains for the Greens and Liberals also contributed to the European People’s Party (EPP) and Socialists and Democrats (S&D) losing 87 seats and their majority, which has allowed them to dominate since 1979. A group needs at least 376 seats to hold a majority, so although 150 seats would not give Mr Salvini’s ENF group anything like a majority it could make it harder for the main parties to pass laws.

It triggers the start of weeks of horse-trading between parties as to who will join forces and create a majority, which will influence who gets the bloc’s top jobs.

This includes the post of EU Commission president when Jean-Claude Juncker’s term ends in November. Yesterday Mr Juncker’s right-hand man, EU Commission secretary-general Martin Selmayr, suggested that his boss’s reign could be extended well into the new year because of the fragmented election result and the bitter battle over who will replace him which is likely to follow.

The leader of the party with the largest number of seats would normally take on the role of EU Commission president. At the moment, this is EPP leader Manfred Weber, a German who is backed by Angela Merkel, Germany’s chancellor.

But the lack of an absolute majority means his candidacy is far from certain and French president Emmanuel Macron, who boosted Liberal numbers in the parliament, is known to favour Michel Barnier, the EU’s chief Brexit negotiator, taking the role.