Former Italian Prime Minister Silvio Berlusconi has been hospitalised with ‘the early stages of double pneumonia’ after testing positive for coronavirus.

Double, or bilateral, pneumonia, which affects both lungs and can make breathing difficult, has been seen in many cases of patients hospitalised with COVID-19.

Berlusconi, 83, who has a history of heart and other medical problems, went to hospital in Milan ‘as a precaution’ on Thursday night, two days after testing positive for the coronavirus.

His condition is not serious, his Forza Italia party said on Friday.

Lucia Ronzulli told RAI state TV that the media mogul was doing well and was undergoing ‘precautionary monitoring’ of his infection.

Former Italian Prime Minister Silvio Berlusconi (pictured in 2016) went to hospital in Milan ‘as a precaution’ on Thursday night, two days after testing positive for the coronavirus

‘He passed the night well,’ she said.

State radio later said Mr Berlusconi had been admitted to San Raffaele hospital in Milan, where his private doctor is based, shortly after midnight.

Sky TG24, reporting from outside the hospital, said Mr Berlusconi had the ‘beginnings of pneumonia’ and was given an oxygen mask to aid breathing.

Italian media have stressed he is not in intensive care. Sky said he arrived by private car and walked into the hospital, where he had a CT scan shortly after arrival.

On Thursday, Mr Berlusconi, speaking in a strong but nasal voice from his estate on the outskirts of the city, told his supporters he no longer had fever or pain. 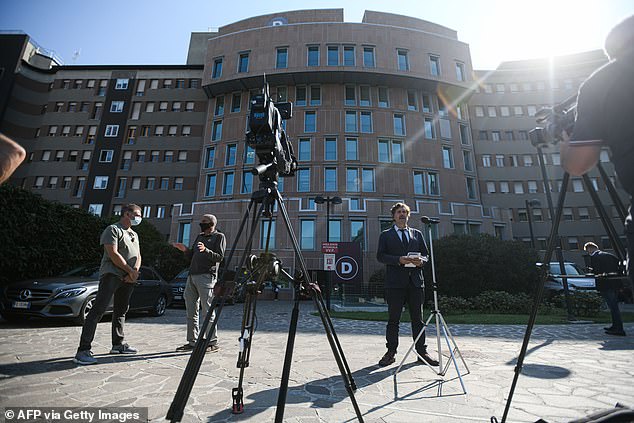 A general view shows the San Raffaele Hospital in Milan on September 4, where Berlusconi has been hospitalised

Italian media have said two of his adult children were recently diagnosed with Covid-19 and are self-isolating.

‘Unfortunately this isn’t a cold,’ La Stampa newspaper reported him saying on Thursday. ‘Now it touches me — but not only me, but also my family — I realise more than ever how grave’ the pandemic is.

‘I’m aware of how much sorrow it has sowed in so many families, of how much pain it has caused so many people. I think of all those who aren’t here any more, I think of those who lost their loved ones,’ he said.

He was further quoted as saying that earlier in the week, as well as fever, he had muscle and bone pain, ‘but it passed’. 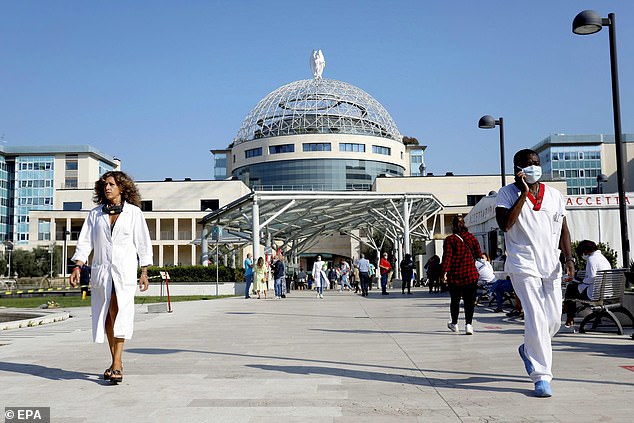 Italian media have stressed he is not in intensive care. Sky said he arrived by private car and walked into the hospital (pictured), where he had a CT scan shortly after arrival

In 1997, he was successfully treated for prostate cancer, including by surgery. In 2006, he had heart tests at San Raffaele after fainting during a speech. A few weeks later he was fitted with a pacemaker at a US hospital.

He also has had bowel surgery for an obstruction and suffered an inflammatory eye condition.

Mr Berlusconi spent some of his summer holiday at his seaside villa on Sardinia’s Emerald Coast. Many of Italy’s recent cases of Covid-19 have been linked to clusters in people who took holidays on Sardinia.

According to Italian media, at the urging of family members, he spent a few weeks at another one of his villas, in France, early in Italy’s Covid-19 outbreak, which was particularly devastating in Lombardy, where Mr Berlusconi’s home and business empire is based.

On Thursday, the three-time former premier vowed to keep campaigning in upcoming regional elections in Italy for the centre-right Forza Italia party that he created more than 25 years ago.

The party has steadily lost popularity with voters in recent years as Mr Berlusconi battled legal problems linked to his media business and his infamous ‘bunga bunga parties’.

After being convicted of tax fraud in 2013, he had to surrender his Senate seat. He is currently a legislator in the European Parliament.