Italy’s two populist parties which have been unsuccessfully trying to form a coalition government would have an outright majority in parliament if a new vote was held today, polls show.

Attempts in Rome to form a coalition government crumbled again this week, sending markets into turmoil both in Italy and across the Eurozone, as a July snap election is becoming increasingly likely.

Support for the right-wing League party was up up eight per cent in one poll, and ten per cent in another, from its 17.5 per cent result at the March 4 elections.

Polls show support for Matteo Salvini’s League party is soaring, meaning a coalition with 5-Star would win outright if a new election was held – a prospect becoming increasingly likely in Italy

Polls said support for the 5-Star Movement remain close enough to its election result of around 33 per cent that the two parties would win outright if they joined forces.

Despite the poll results, the 5-Star Movement has today sought to make a renewed attempt to form a coalition government with the League, a source said.

However, League leader Matteo Salvini has appeared to throw cold water on that idea, saying Italy should return to an election as soon as possible.

‘The earlier we vote the better because it’s the best way to get out of this quagmire and confusion,’ Salvini told reporters.

It was President Sergio Mattarella’s rejection of having 81-year-old eurosceptic Paolo Savona as economy minister which scuppered the formation of a coalition government – which has been in the works since the March elections. Rejection: President Sergio Mattarella vetoed the 5-Star/League’s choice of eurosceptic Paolo Savona as economy minister which scuppered the formation of a government this week

Instead, President Mattarella designated former IMF official Carlo Cottarelli to head a politically neutral government, which riled 5 Star and the League – and did nothing to calm financial markets.

Mr Cottarelli returned for informal discussions with Mr Mattarella yesterday, after asking for more time to come up with a list of cabinet ministers, and left without comment.

Unless there is a surprise imminent breakthrough, Italy will go back to elections, with most major parties calling for the president to dissolve parliament and hold a vote as soon as July 29.

In such a case,  President Mattarella would still have the constitutional right to refuse to appoint any minister suggested by a potential coalition government. 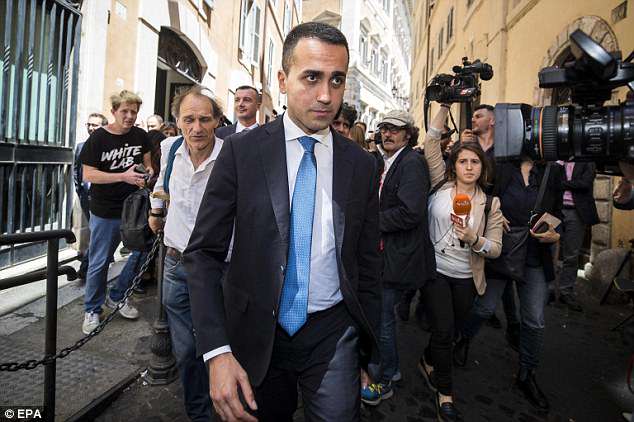 The likelihood of a snap election has rocked financial markets across the Eurozone, with the currency sinking to multi-month lows.

THE POWER OF THE PRESIDENT OF ITALY

The President of Italy is not chosen by the people but elected by MPs.

He has very limited powers but can appoint heads of government and their chosen ministers.

The President’s right to refuse to appoint a minister, even if this is the choice of the prime minister-designate and backed by the majority of MPs, is a right is enshrined in Article 92 of the Italian constitution.

This means that even if there is a new election, and a new coalition government is proposed, he can still refuse to appoint ministers.

The President can be impeached, but this is a lengthy process which goes through a special committee and then a secret ballot vote in both the upper and lower houses of Parliament, before the case goes before judges in Italy’s highest court.

The Eurozone breakup index climbed to its highest level in 13 months, according to CNBC, as investors view a snap election as a de facto referendum on whether or not Italy will keep the euro.

There are fears that an outright majority coalition government of 5-Star and the League – both eurosceptic parties – would be prepared to break from the Eurozone.

Italian government bonds, which suffered one of its most dramatic speculative attacks in years on Tuesday, found some support from local investors on Wednesday.

The yield on 10-year bonds edged away from four-year highs and two-year yields, the focus of earlier attacks, also fell.

‘As the third biggest economy in the EU, as a heavily indebted one, and with Eurosceptics seemingly in the ascendancy markets have worried that the EU again faces an existential crisis,’ Greg McKenna, chief market strategist at AxiTrader, said.

However, he added; ‘I’ll go out on a limb and suggest there are a bunch of experienced political operatives in Europe and some neophytes in Italy who might just have got the shock of their lives on how quickly this situation developed and we’ll see some backpedalling.’

If the political situation in Italy takes a turn for the worse, it would be ‘a disaster’ for the whole euro zone, the Berlin-based DIHK Chambers of Industry and Commerce said on Wednesday.

DIHK Managing Director Martin Wansleben said they ‘do fear’ that political events in Italy could contribute to an economic shift in Germany, Europe’s biggest economy and euro zone growth driver.

Markets have been shaken by political turmoil in Italy, where the formation of an interim government of unelected technocrats has been delayed.

What is happening in Italy?

The failure of new prime minister-designate Carlo Cottarelli to form a cabinet has sparked political upheaval that is likely to lead to new elections.

Investors believe the vote could see Italy moving closer to abandoning the euro if the populist League Party and Five Star Movement gain more ground in any poll.

That could have major implications for the European financial system and its economy.

How have markets reacted?

Badly. Italy’s political turmoil has stoked fears of instability in the eurozone, causing stocks to fall globally and knocking the single currency. 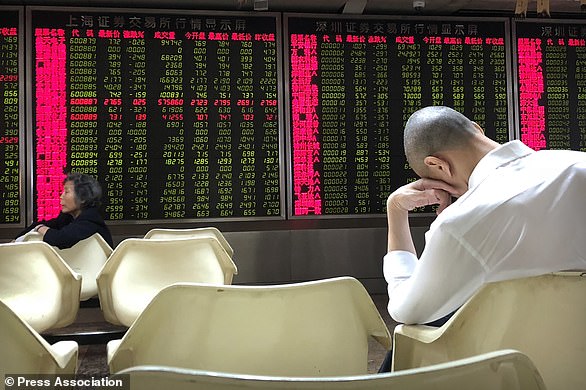 Britain is not in the eurozone and UK banks have already reduced their exposure to Italy, so the impact is limited, for now. However, the FTSE 100 has been pummelled, with £25 billion wiped off the value of the blue chip index on Tuesday.

Italy abandoning the euro would also be bad for Europe as a whole as it would be likely to trigger a financial crisis in one of the continent’s biggest economies.

The pound would normally benefit from a continental crisis as investors flock to safe haven assets, but since the Brexit vote the pound has fallen out of favour and has moved up only marginally against the euro.

Political implications for the UK?

Analysts fear that the Euroscepticism of the League Party and Five Star Movement could ultimately spill over into a Brexit-like disaster where Italy not only crashes out of the single currency but also out of the EU.

But that is a long way off and Britain has its own political crisis brewing. Theresa May’s Conservative Party is yet to ink a Brexit transition deal or give any indication whatsoever of how it plans to honour its pledge to deliver the ‘exact same’ benefits of EU membership from outside the bloc.

What are the experts saying?

Some believe that a full blown crisis is under way. Others, such as UBS chief economist Paul Donovan, think it is overblown.

‘Everyone needs to take a deep breath and calm down,’ he said.

‘Bond market moves do not break up monetary unions. Bank runs do. There is no evidence of bank runs. Neither Italian parties nor Italian voters support leaving the euro.’