Italy’s schools will not reopen until September, PM announces

Italy, the first European country to be hard-hit by the coronavirus, will allow some businesses to reopen as soon as this week while aiming to reopen manufacturing and construction from May 4, Prime Minister Giuseppe Conte said.

Conte gave the most detailed outline yet of plans to reopen the economy, in a newspaper interview published on Sunday ahead of the government’s roadmap out of lockdown, which he said would be released no later than early this week.

Italy, hit hard by the virus weeks before other major Western countries with a total death toll of 26,000, has been forced to serve as a model for how to fight it.

Coronavirus deaths in the country rose by 260 on Sunday, the smallest daily tally since March 14, the Civil Protection Agency said.

Sunday’s death toll was sharply down from 415 on Saturday, to mark the third daily fall in succession.

Italian Prime Minister Giuseppe Conte gave the most detailed outline yet of plans to reopen the economy, in an interview published on Sunday 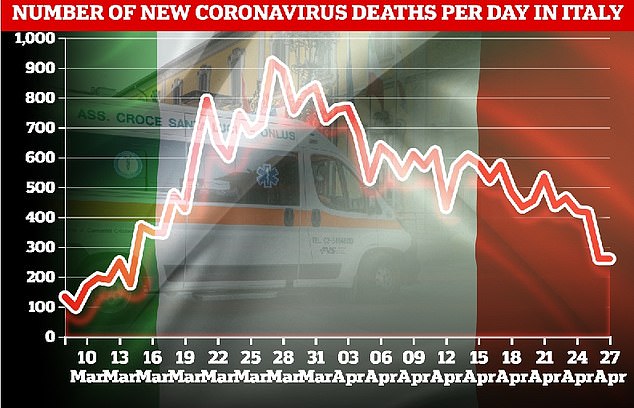 The total of fatalities since the outbreak came to light now stands at 26,644, the agency said, the second highest in the world after that of the United States.

Italy is being closely watched around the world as it takes its early steps to chart a path out of a strict lockdown it imposed in early March.

Conte described a phased process that would see much of manufacturing restarted in early May, although businesses frequented by the general public such as bars and restaurants would have to wait a bit longer. Schools would remain shut until September.

‘We are working in these hours to allow the reopening of a good part of businesses from manufacturing to construction for May 4,’ Conte told Italian daily La Repubblica.

Some businesses deemed ‘strategic’, including activity that was mainly export-oriented, could reopen this week providing they get the go ahead from local prefects. 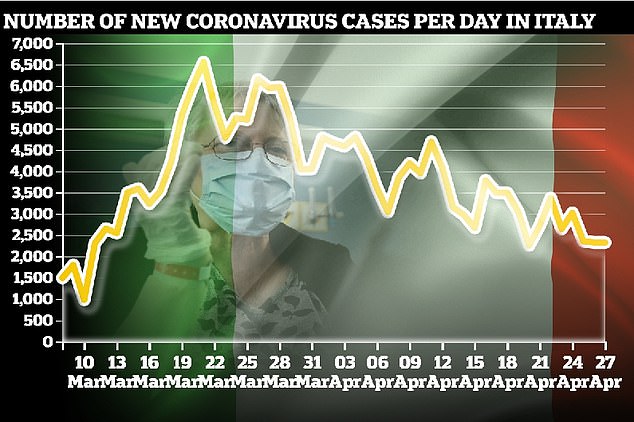 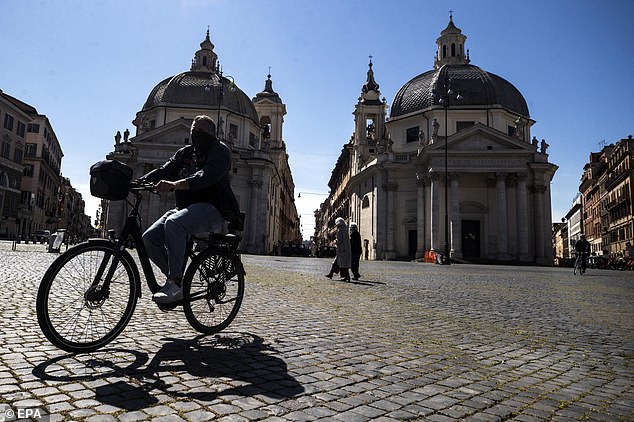 Conte gave the most detailed outline yet of plans to reopen the economy, in a newspaper interview published on Sunday. A cyclist wearing a face mask rides in Piazza del Popolo square in Rome, Italy

Exporting companies need to resume activity sooner to reduce the risk of being cut out of the production chain and losing business, he said.

‘We can’t prolong any further this lockdown… we would risk seriously undermining the socio-economic fabric of the country,’ Conte said.

Conte reiterated that any restart would have to be gradual, and said companies would have to introduce strict health safety measures before opening their doors.

Newspapers have said industries where the contagion risk is low, such as manufacturing and wholesale businesses, would be allowed to open on May 4. Retailers could then reopen on May 11 and bars and restaurants on May 18, under tough conditions. 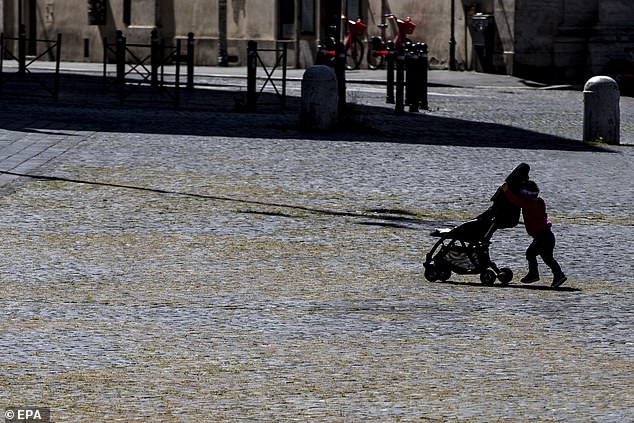 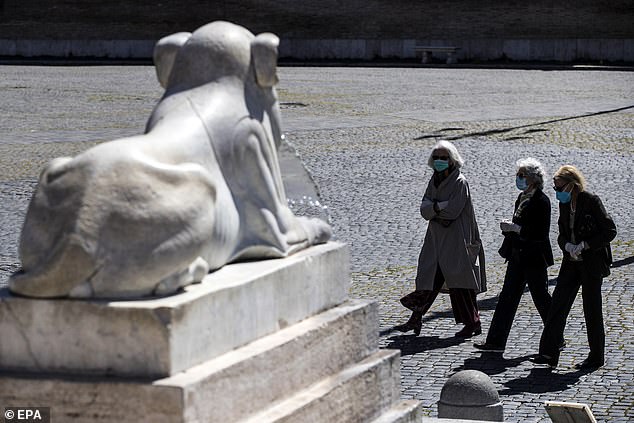 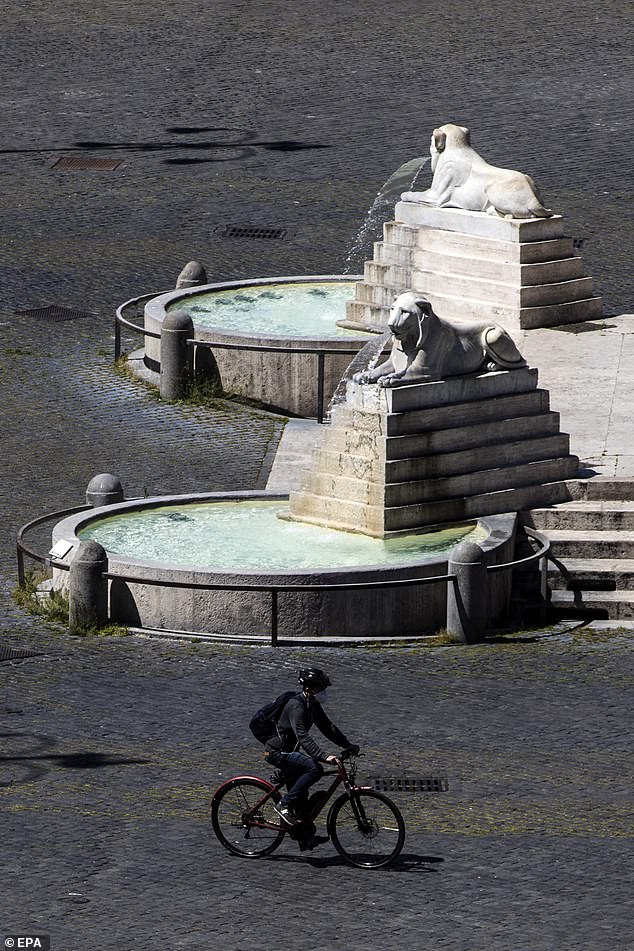 The lockdown has put a strain on the euro zone’s third largest economy and Italian business leaders have called for the restrictions to be eased to head off economic catastrophe.

Rome has introduced a series of measures including state-backed loans to help businesses stay afloat. But some businessmen have complained about delays in implementing them.

Conte said the government was monitoring banks to make sure state-guaranteed liquidity arrived to companies in need. 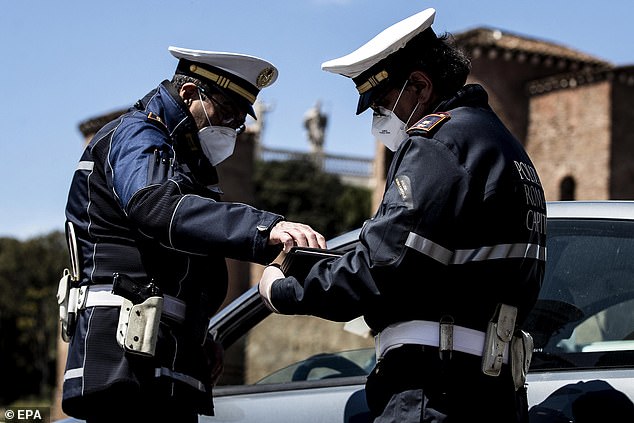 Municipal Police officers stop motorists to check whether they have a valid reason to travel during a nationwide lockdown over the coronavirus disease (COVID-19) pandemic, in Rome

He also said the government was working on a series of measures to help industry by cutting bureaucratic red tape.

Asked about schools, Conte said the plan was to reopen them in September. But he added studies showed the risk of contagion was very high. Teaching remotely is working well, he said.

Nearly 200,000 Italian companies have asked authorities for permission to be able to operate during Italy’s lockdown, either because they help essential businesses or because they deem themselves strategic for the national economy.

The interior ministry said a streamlined procedure is being implemented that “trusts the sense of responsibility of individual business persons” in allowing companies to resume operations.

The ministry’s local authorities can verify that a company respects Covid-19 safety rules, including social distancing.

Most of the requests have come from three northern regions that are among Italy’s most productive, but also among those most heavily hit by coronavirus cases.

The number of confirmed cases in Italy as of Sunday was 197,675, the third highest global tally behind those of the United States and Spain.

There were 2,009 people in intensive care on Sunday against 2,102 on Saturday, maintaining a long-running decline. Of those originally infected, 64,928 were declared recovered against 63,120 a day earlier.

The agency said 1.187 million people had been tested for the virus against 1.148 million the day before, out of a population of around 60 million.