This is a proud moment for father Simon De Brito as his six-month-old son follows his lead and tries beatboxing.

Baby Marcel replicates his father’s sounds with enthusiasm in the heartwarming video.

The footage was filmed in Treillieres, western France, as the father and son enjoyed a special bonding moment.

Simon starts his beatbox routine with Marcel sitting on his lap looking up at him in pure admiration.

As soon as Simon stops, he cues the infant with his right finger to pick up from where he has left off.

Rising to the challenge, Marcel immediately curls his mouth and lets out cute little  sounds as he attempts to imitate his father.

Baby Marcel watches his father Simon’s beatbox routine before having a go himself in footage filmed in Treillieres, western France

He rocks his body to the beat and waves his left hand to the rhythm, while Simon watches in awe and amusement.

Completely absorbed in delivering the beat, the baby turns to face his father and stops blowing raspberries as if to say ‘your turn now’.

When Simon starts to beatbox a second time, Marcel is ready to have a go again and completely throws himself into it like a natural.

The 27-second clip has been widely shared by thousands of amused viewers since it was filmed on March 18. 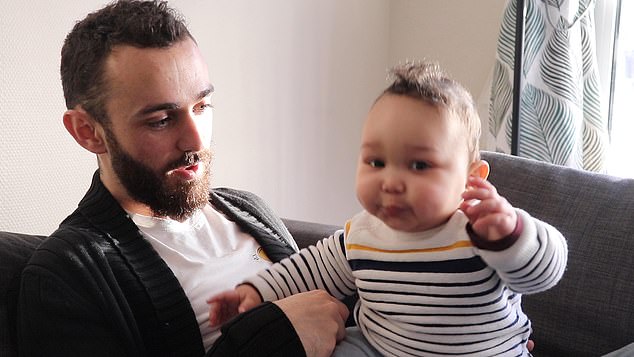 Action: Marcel shows his father Simon how to beatbox in his own little way and does it with such passion 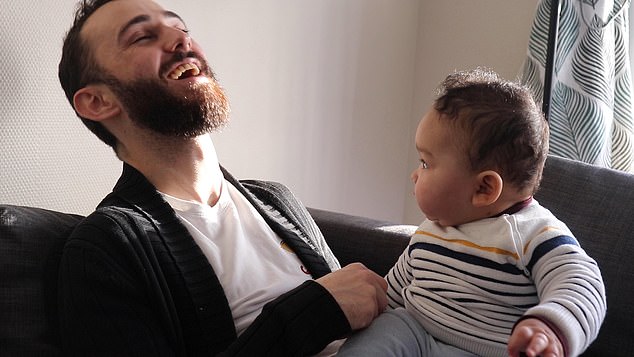 Proud moment: Father Simon is in awe that his six-month-old son Marcel is already following his footsteps