It’s not a gap, it’s a GULF! Manchester City prove they are on a different planet to Chelsea

The combined cost of the two starting line-ups was a little shy of £1billion, so on paper this was not just a title showdown but a billion pound game: the ultimate manifestation of Premier League spending power.

On grass, it was something entirely different. One of the most lavishly assembled non-events imaginable, in which Chelsea, needing to throw the sink at Manchester City at a point of title jeopardy, were equipped with neither a gameplan nor even the right personnel.

Chelsea’s best player, Mason Mount, was on the bench until the 81st minute. Chelsea’s most expensive player, Romelu Lukaku, was redundant because no one would risk a 20-yard pass in his general direction. 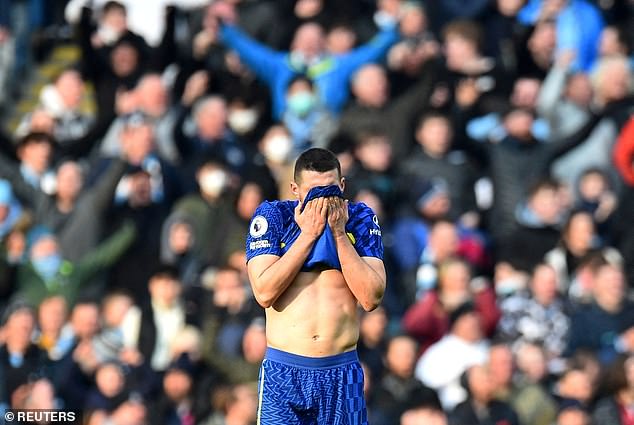 The Blues aren’t the same team who lifted the Champions League, and couldn’t muster a fight

The sight of Thomas Tuchel leaping out of his seat and fulminating delighted the TV commentators, as if making a noise when nobody is listening adds the remotest value.

Arsenal’s performance against City on New Year’s Day had demonstrated that rapid ‘offensive transitions’, as Tuchel likes to call them, are the only means of contending with City’s process of suffocation. There were next to none of these from Chelsea.

There are mitigating circumstances. A global pandemic. An Africa Cup of Nations. Injuries which have left them with a 37-year-old at the centre of a five-man defensive line. A need for time to cohere a squad built by four previous managers in as many years.

But for a starting XI which cost almost £400million, this was a sickly shade of beige. As Tuchel closes in on the first anniversary of his appointment at Stamford Bridge, his side remain a speck in City’s rear-view mirror. ‘They are the European champions. How incredible they are,’ Guardiola said of Chelsea, somehow maintaining a straight face. 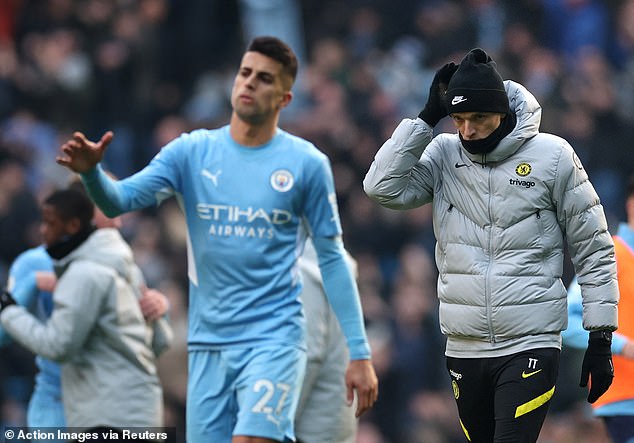 Blues boss Thomas Tuchel faces a tough task to reign City in at all, let alone this season

It is going to take competence, cussedness and no small amount of competitive anger to haul City back at any time in the next few years and restore a competitive edge to the Premier League. A century of points, or thereabouts, is regulation for them now.

They are on course for 96 points, to go with the 100 they got in 2017-18 and 98 the season after. Breaking through 90 points was always a monumental achievement for Manchester United, whose best in their imperious 1990s era was 92 (and even that came in a 42-game season).

Such are the rewards of laying deep foundations beneath a club. To hear Guardiola describe how he knew Kevin De Bruyne innately having spent six seasons with him was a reminder of that. City have been refining their player acquisition system since the days when Carlo Ancelotti was managing Chelsea.

The squad is so complete that paying out £100m for Jack Grealish is a minor affliction. None of it is rocket science, though simple common sense will do when so many of your challengers lack that basic commodity.

Manchester United have spent billions since Sir Alex Ferguson left but without the remotest level of competency. The diminution of that club is nothing less than a scandal. Arsenal are even further away from the title stage they once coveted as a club of global standing. Tottenham’s executives have mindlessly self-destructed. 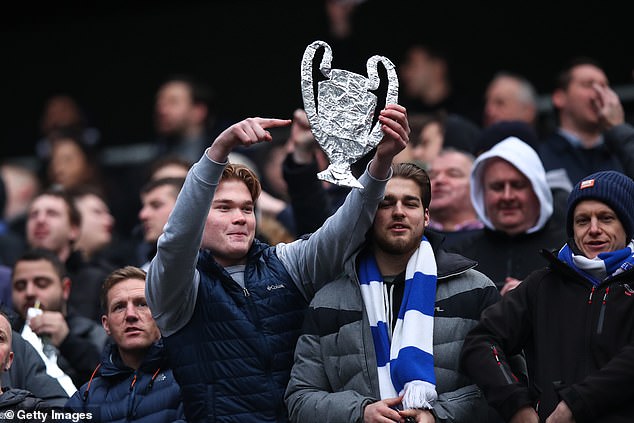 Liverpool are the only ones holding a candle to the champions designate, though they do not have a Gulf state’s wealth underpinning them. City did not even feel the need to make much of the fact that they overtook Manchester United’s annual commercial revenues for the first time last week.

Roman Abramovich’s loans to Chelsea have just topped £1.5bn, though they have been through four managers since Guardiola was appointed and only one of them has made it through two seasons.

None of which mitigated for Tuchel’s air of deep resignation on Saturday when asked about the need for three points: the do-or-die aspect of a first v second clash. ‘Let’s be realistic about us,’ he replied.

His use of Christian Pulisic and Hakim Ziyech either side of Lukaku was bewildering, given Mount was the shining light when Chelsea lost at West Ham last month. Mount had been on the field for five minutes when he was bringing the kind of cavalier spirit down Chelsea’s right that had been absent all afternoon.

He located Timo Werner, watched him waste the ball, won it back again and crossed. Too late. There was only a minute left. 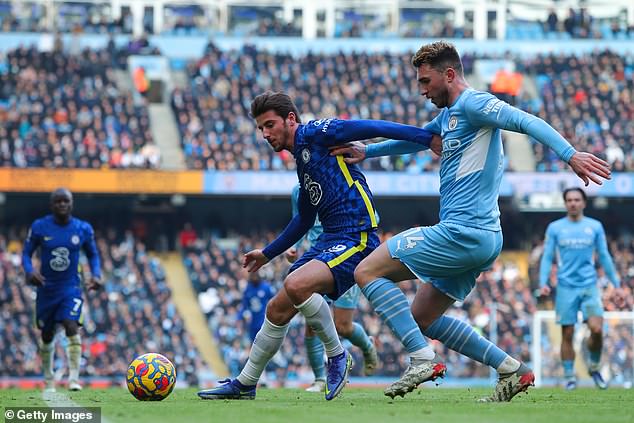 Fleetingly, as Lukaku danced through a flimsy John Stones challenge in the game’s early minutes, there was a thrilling hint that he might wreak the kind of devastation on Stones that he had on another England centre half, Tyrone Mings, at Villa Park on Boxing Day. But the forward drifted into insignificance.

For 45 minutes at Villa, he had been the orchestrator in chief, demanding possession and dictating where the ball should go. Here, there was only resignation and hesitation. Tuchel’s delicate dance around his performance — ‘I didn’t say that,’ he retorted when it was put to him that he had ‘criticised the strikers’ — suggested the profound awkwardness of this particular relationship.

Chelsea’s semi-detachment was evident all over the pitch. Thiago Silva and Mateo Kovacic backing off after De Bruyne had eased past N’Golo Kante on the way to his goal.

Callum Hudson-Odoi sending in a poor free-kick and an over-hit cross in the space of 90 seconds. And at the end of it all, the same maddening fatalism from Tuchel. ‘This can happen if you play City.’

Guardiola’s biggest challenge is to avoid giving the impression that he knows the title is won. ‘We can lose games — one and two and three and four and five,’ he insisted, protesting City’s vulnerability a little too much. 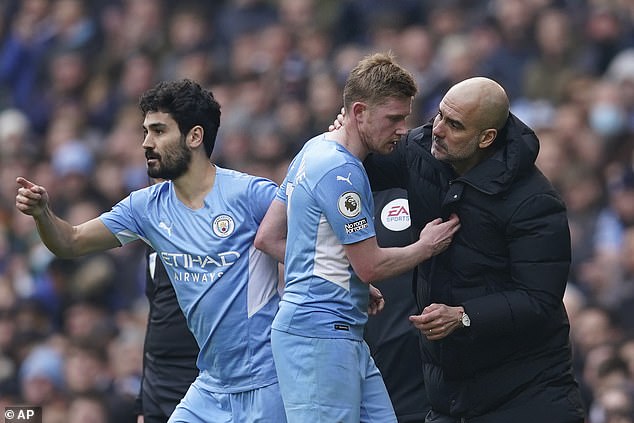 Pep Guardiola’s squad of superstars are on track for the title, though he doesn’t like to admit it

Though Liverpool’s win at Brentford narrows the gap at the top to 11 points with a game in hand, no Premier League side has failed to win the title from the 13-point lead that City had assumed by Saturday evening.

They have already played Chelsea, Arsenal, Liverpool and United away from home, leaving four months of football in which the only fixture to remotely quicken the pulse is Liverpool’s visit to the Etihad in April — in the middle of the first and second legs of the Champions League quarter-finals. That competition remains City’s one great, unattained Holy Grail.

Guardiola wanted to conjure the mental image of City losing a game in the four months ahead and how they would respond in that situation. ‘I know we will react well. We’ll try again. We’ll try again,’ he insisted.

Managers do not talk their team down when the challengers are at their throats, fighting them, looking to drag them down to earth. Very few in this competition seem so inclined.