It’s not JUST Germany that are hit for six! Colombia humiliated by Ecuador in World Cup qualifier

It’s not JUST Germany that are hit for six! Colombia humiliated by Ecuador in World Cup qualifier as former Manchester United assistant Carlos Queiroz is left on brink of the sack

Germany were not the only high-profile international side to ship six goals last night – Colombia also had a game to forget in their crucial World Cup qualifier against Ecuador.

James Rodriguez and Co fell to a crushing 6-1 defeat against their neighbours, with Ecuador scoring as many goals on the night as they had in their last 16 games against the Colombians.

It was the first time Colombia had conceded six in a World Cup qualifier in 43 years, heaping pressure on head coach and former Manchester United assistant Carlos Queiroz after also being beaten 3-0 by Uruguay last week. 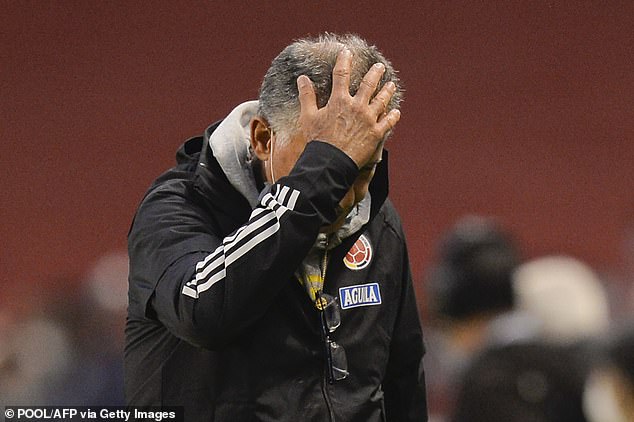 ‘The last two matches were very hard for us,’ the manager said after the game.

‘The players don’t deserve this situation, they have more quality and desire than the results show.

‘I’m the only one responsible. These players are the same ones who brought glory to Colombia.

‘The players are very hurt by these two results. I know them very well and this is going to affect them a lot.’ 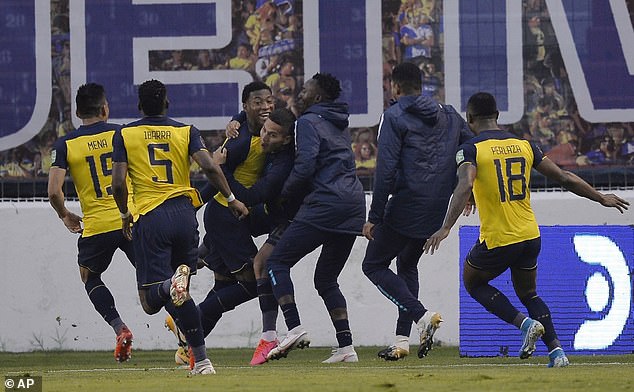 Ecuador were 4-1 up and cruising by half-time, with their lead only reduced by James’s penalty in stoppage time just before the break.

Gonzalo Plata restored their four-goal cushion when he jinked inside two defenders with 12 minutes to go and curled a left-footed shot in off the post and past Colombia keeper Camilo Vargas.

But madness was to follow when Plata took his shirt off in celebration, forgetting he was on a booking and earning himself a second yellow card in the process.

Villarreal left back and former Watford man Pervis Estupinan put the gloss on the historic rout in the final minute, with Vargas unable to keep out his low free-kick.

The South American World Cup qualifiers are notoriously difficult, with only the top four nations out of 10 qualifying automatically for the tournament. 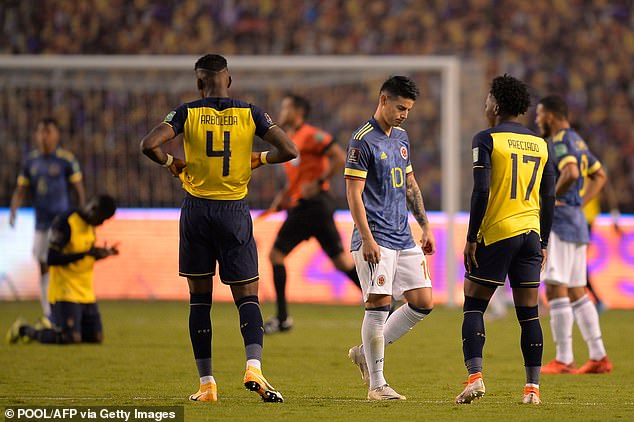 Ecuador have been the surprise package in this year’s edition, sitting just behind Brazil and Argentina at the top of the table with nine points from their first four games.

Gustavo Alfaro’s men notched an impressive 4-2 victory over Uruguay and ran Argentina close in a narrow 1-0 win for the two-time World Cup winners at the Bombonera.

In contrast, Queiroz’s side have collected just four points and are down in seventh.