It’s not over yet! Deadly storm to batter Sydney AGAIN with 90km/h winds and more rain

The deadly storm which has battered Sydney is set to return with a vengeance, bringing 90km/h gale-force winds and more pounding rain.

Forecasters are warning of mass power blackouts and a chaotic evening commute as a ‘supercell’ thunderstorm rolls over the east coast.

Sydney is being smashed by the worst November storm in 44 years and the heaviest rain in three years. The wild weather has forced the cancellation of more than 130 flights due to only one runway being open at the airport, and is causing chaos for commuters as roads are flooded and trains are delayed.

The deadly storm which has battered Sydney is set to return with a vengeance, bringing 90km/h winds and more pounding rain 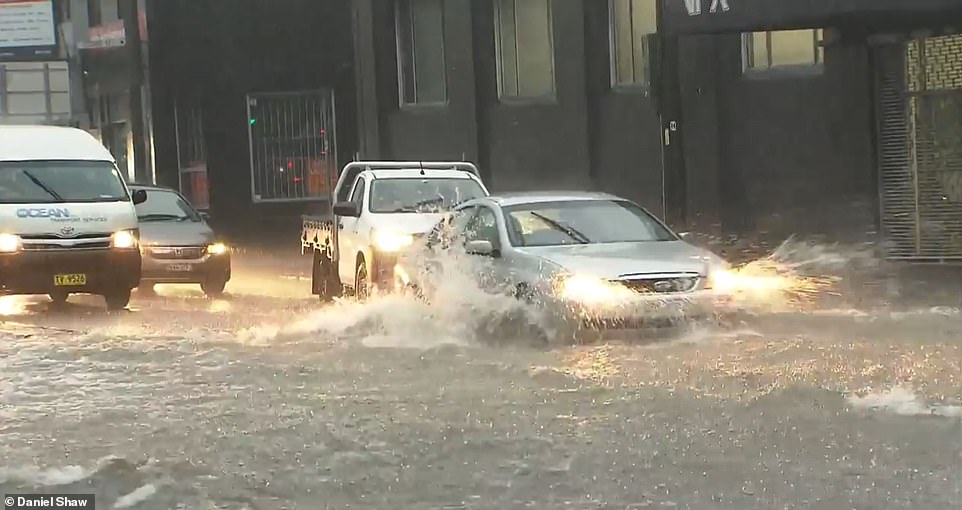 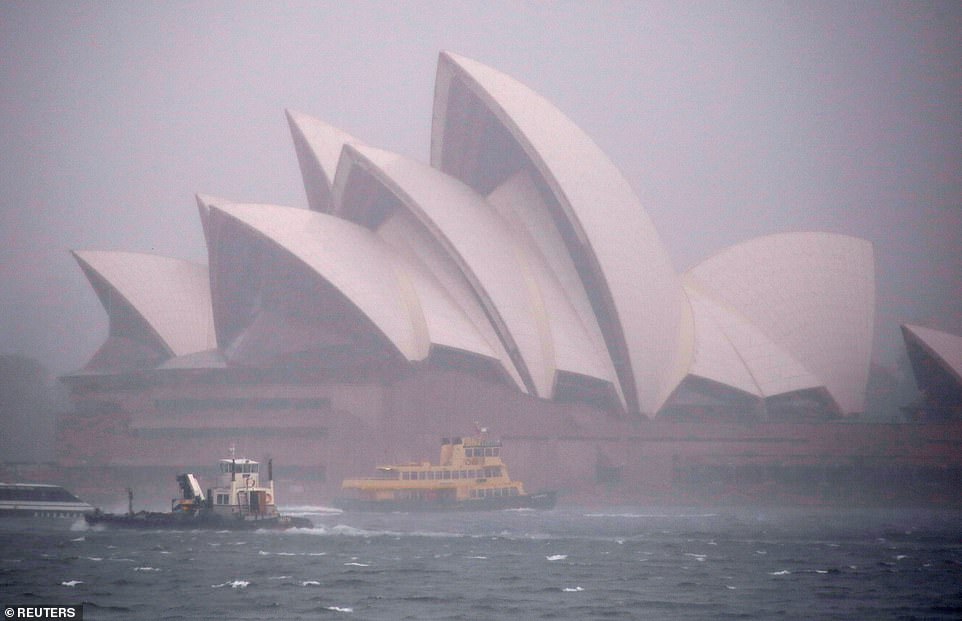 Sydney is being smashed by the worst November storm in 44 years, forcing the cancellation of more than 130 flights and causing chaos for commuters as roads are flooded and train services are cancelled

Parts of the city have received almost two months’ worth of rainfall – or 120mm –  since 5.30am in what is being described as a ‘once in every 100 years’ event.  Up to 200mm is forecast to fall by the end of today.

New South Wales Police highway patrol chief Michael Corboy said the weather was expected to get worse towards the end of the day.

‘If you stayed at home today, stay at home the rest of the day, but, please, don’t go out this afternoon, because it is predicted to come back and get worse this afternoon,’ he said.

‘Due to the fact that the eastern half of Sydney has been completely drenched the ground is sodden and the soil is loose, so trees and branches will be coming down, likely bringing the number of power outages into the tens of thousands as many people will be calling the (State Emergency Services) for help,’ Mr Sharpe told news.com.au.

The thunderstorms could bring hail, according to a severe weather warning issued by the Bureau of Meteorology.

Large hailstones are also expected to be whipped up by lashing winds this afternoon. 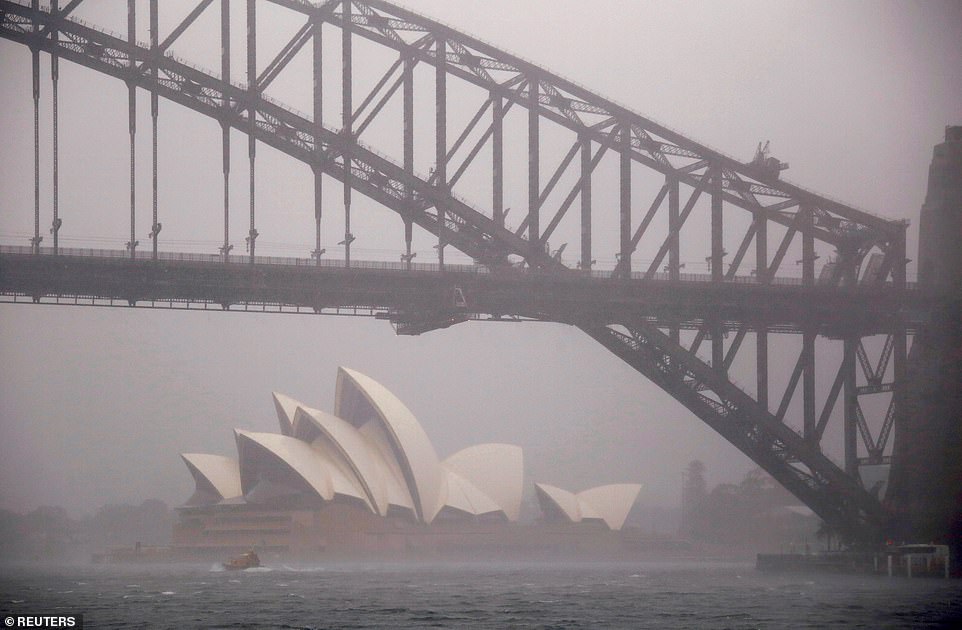 Parts of the city received almost two months’ worth of rainfall since 5.30am in what is being described as a ‘once in every 100 years’ event

Weatherzone meteorologist Kim Westcott said heavy rain and thunderstorms could happen at any time from 2.30pm, and were likely to strike before the evening commute begins.

BOM meteorologist Byron Doyle said the amount of expected rainfall for Wednesday evening was dependent on how the low pressure system moved along the coast.

‘If it moves north, there could be a lot more rain. There will be showers about and winds will pick up,’ he said.

A severe weather warning remains in place for Sydney, as well as a flood warning for Cooks River near Tempe.

A hazardous surf warning is in place for the coast due to the predicted gale-force winds.

The Bureau of Meteorology’s NSW manager Ann Farrell said the rainfall recorded at Observatory Hill – reaching the monthly average for November of 84.6mm before 5.20am and 7am – was the most measured at the site since 1984.

‘According to our estimates, for that intensity and that duration, that’s the sort of rainfall you’d expect to occur about once every 100 years for that particular site,’ she told the Sydney Morning Herald.

Mosman has so far recorded 118mm to 9am while Chatswood had 105mm, including 66mm within one hour.

Shoalhaven’s Porters Creek Dam has recorded the state’s highest total so far, copping 152mm to 9am.

Emergency services have labelled the conditions some of the ‘worst’ they have ever seen in Sydney. 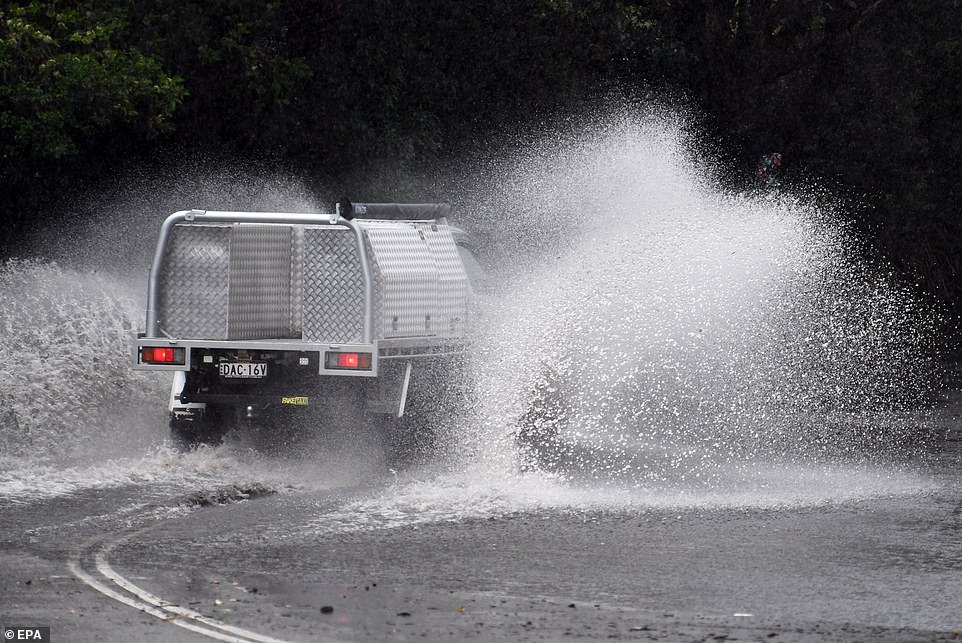 Torrential rain has pounded Sydney on Wednesday, flooding streets and causing chaos in traffic for commuters 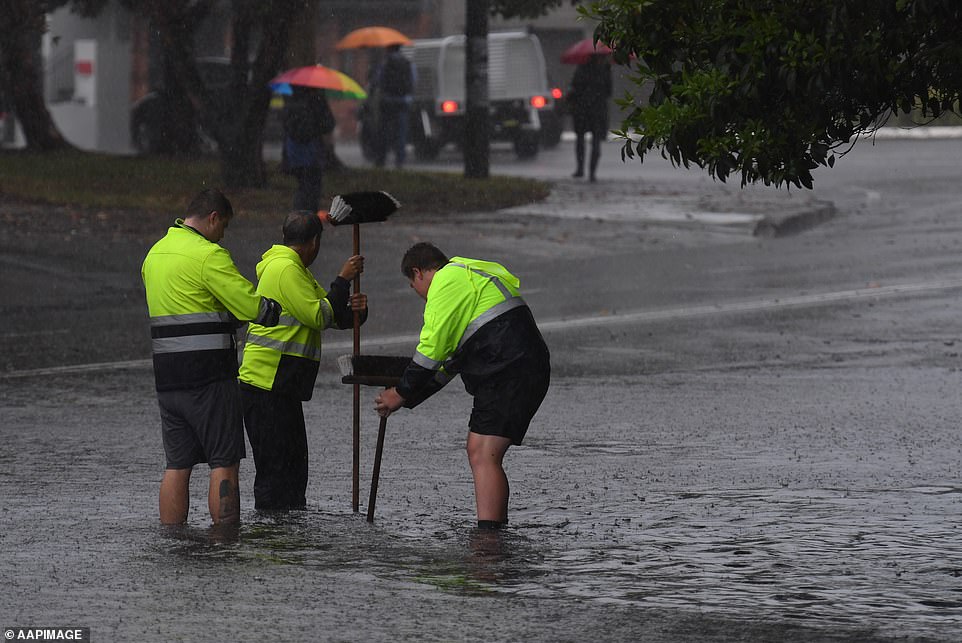 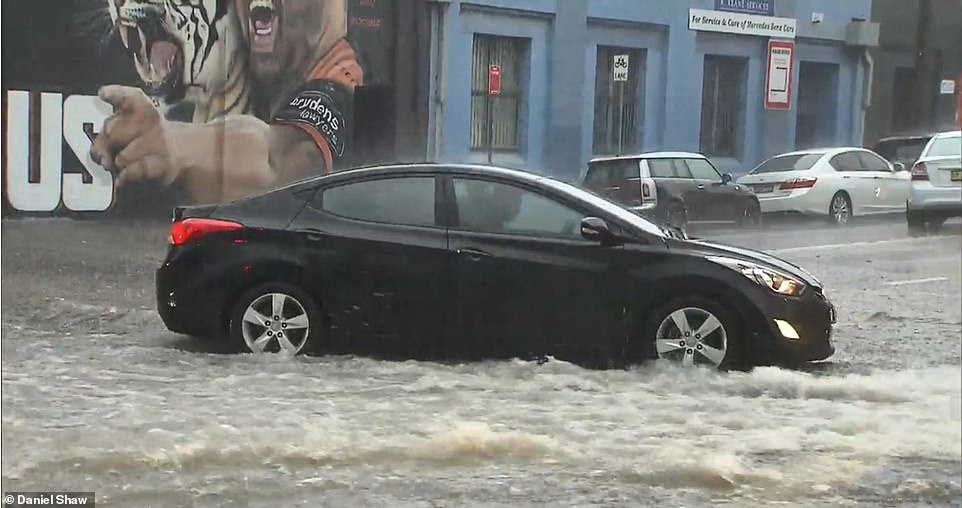 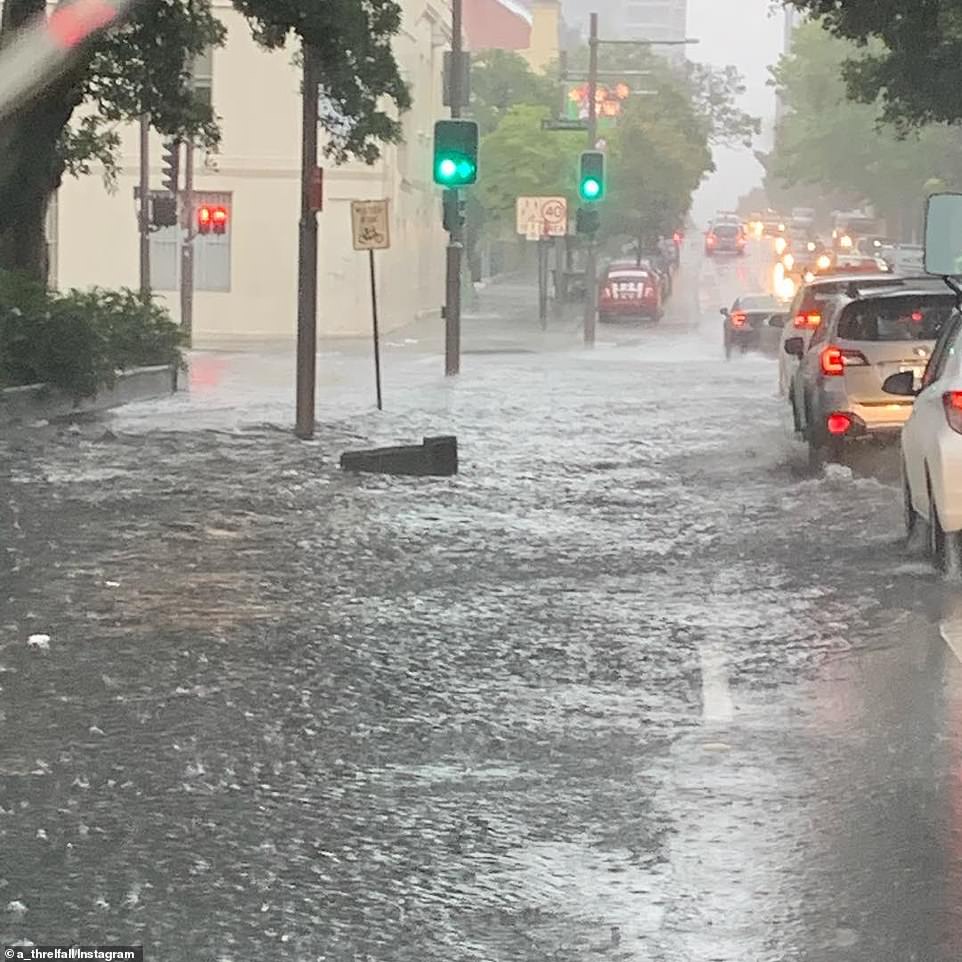 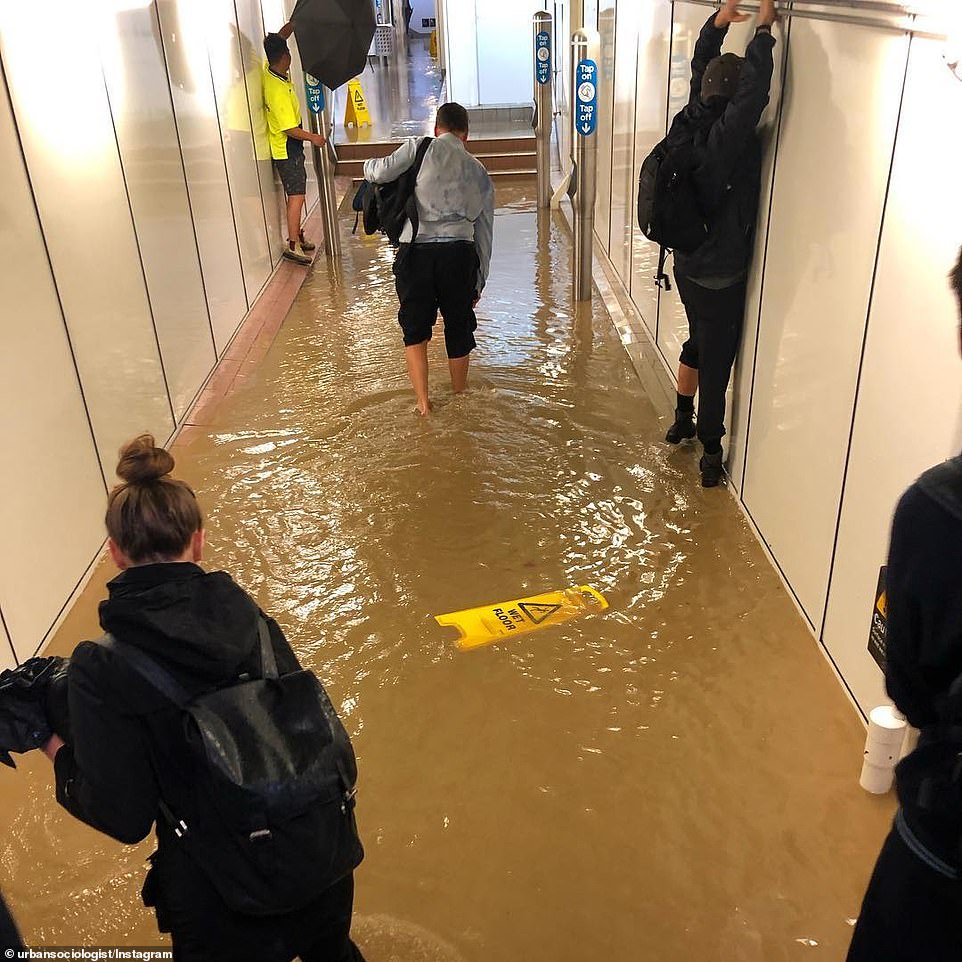 Parts of the city received almost a month’s worth of rainfall in just one hour as a ‘supercell’ thunderstorm makes its way along the east coast (Pictured: Flooding at Lewisham train station) 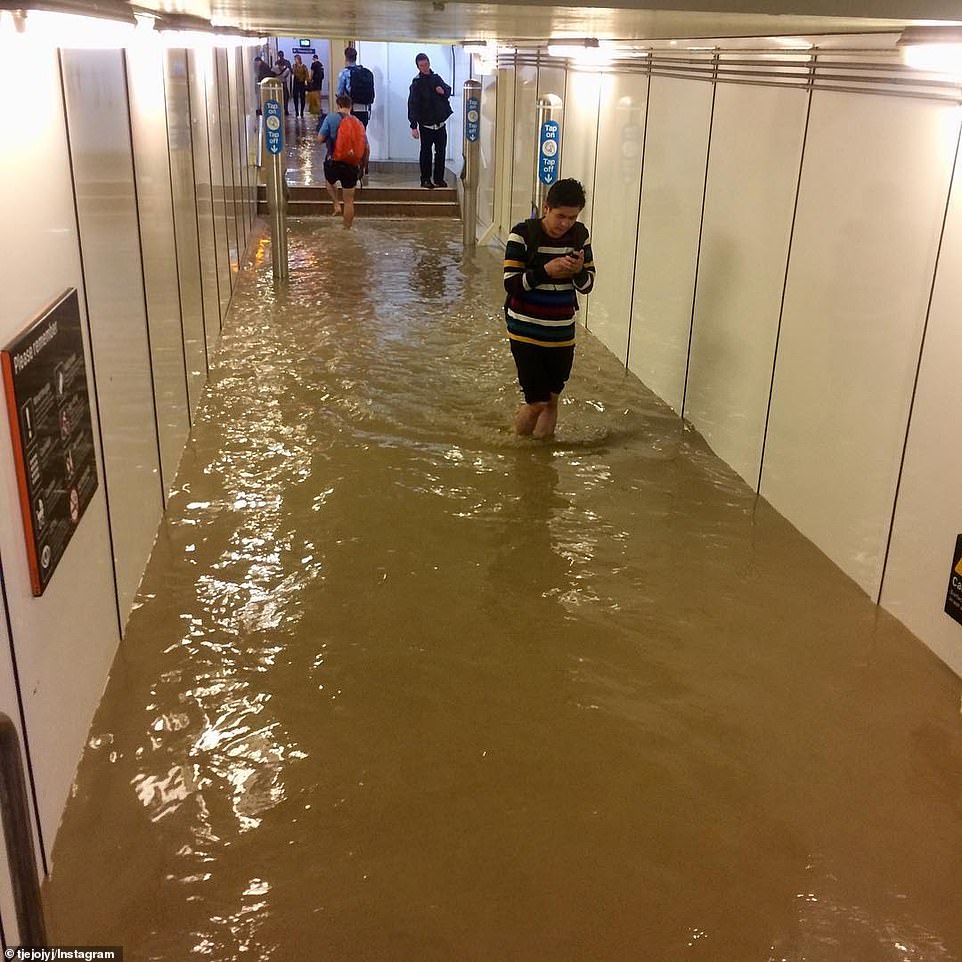 Commuters were warned to stay inside as the dumping of rain coincided with the morning rush hour, as the worst rain in three years pounds Sydney (Pictured: Lewisham station) 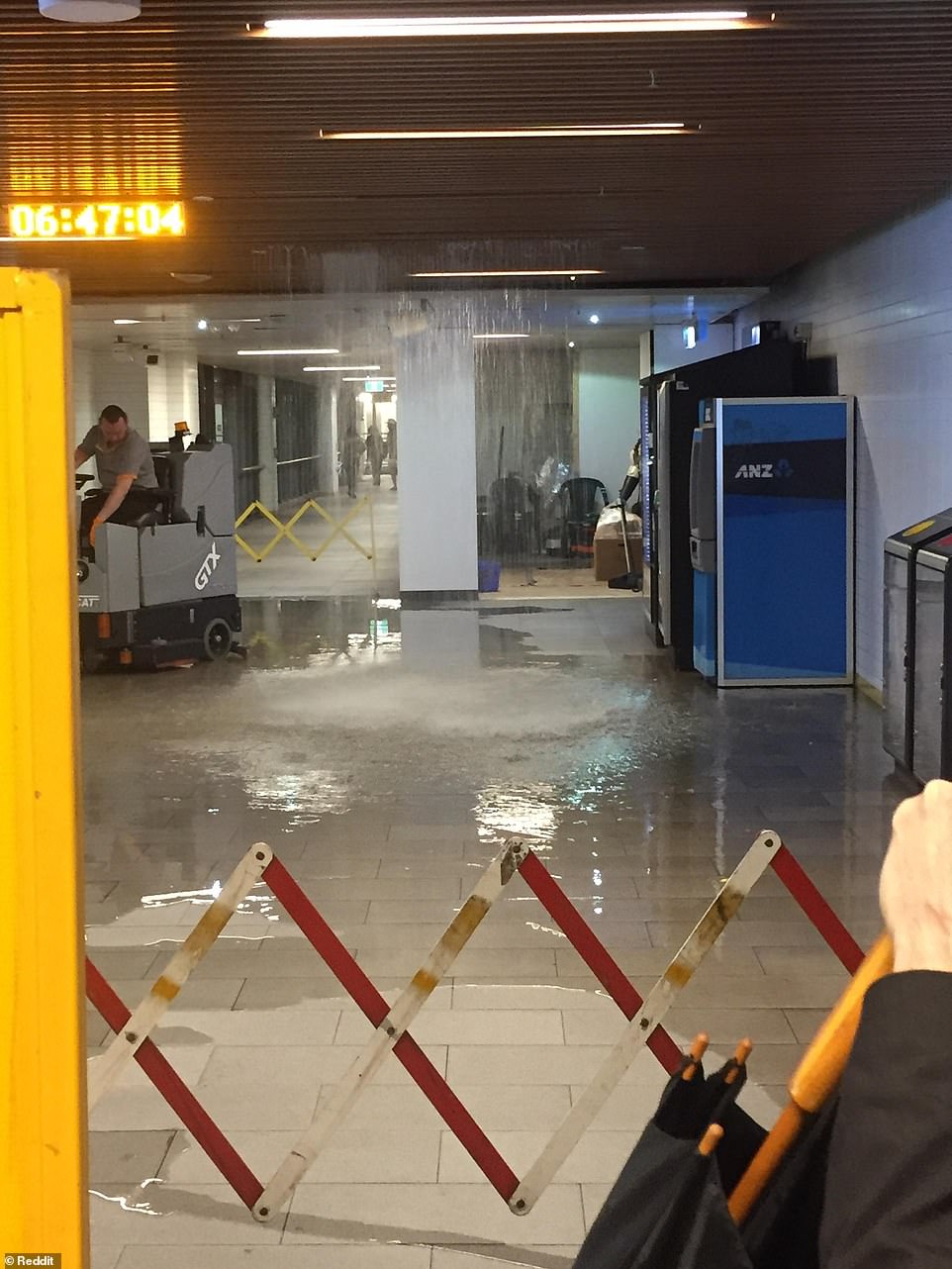 The rain burst through the roof of Town Hall station (pictured), stranding commuters who were left trying to navigate water inside the area 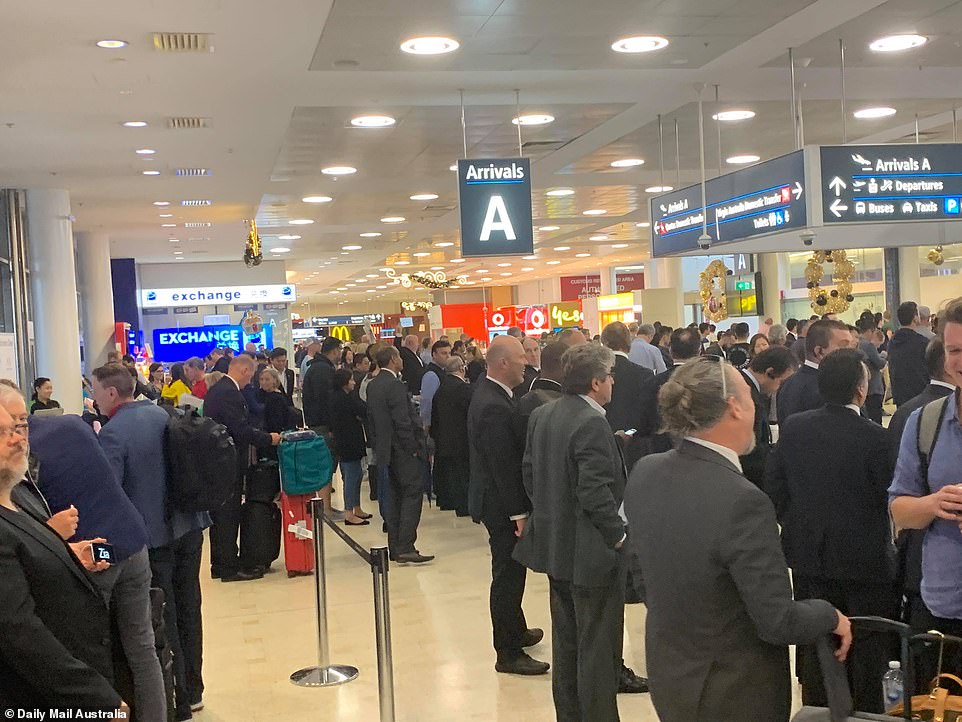 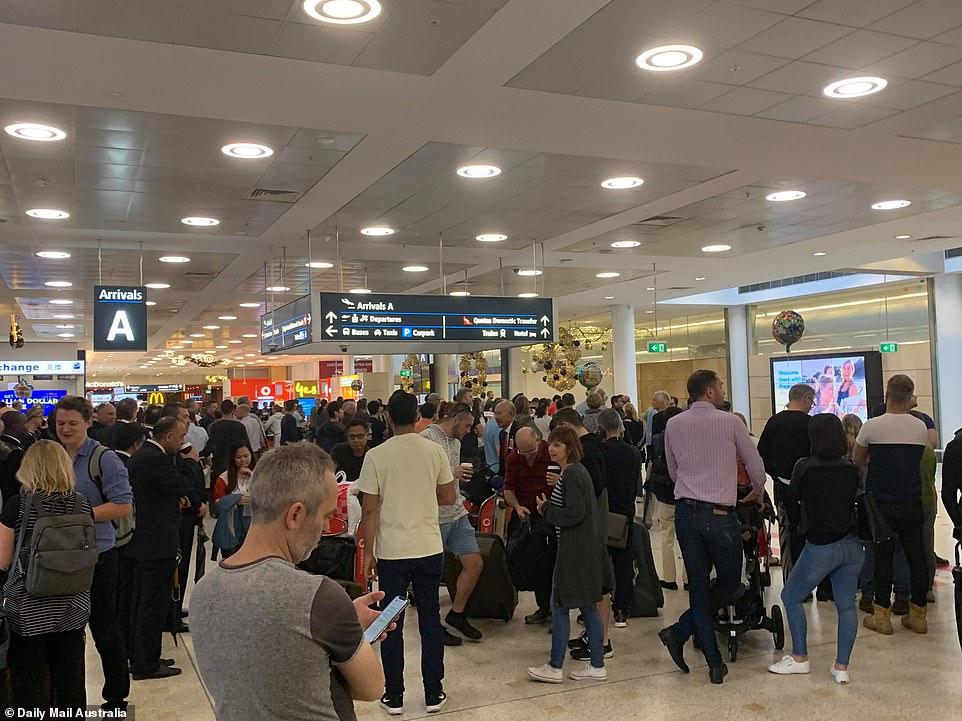 Earlier, a man was killed in a two-car crash in Thornleigh in the city’s north, while two police officers were seriously injured by a falling tree.

A police spokesman confirmed to Daily Mail Australia the male passenger died at the scene after the crash at The Esplanade at Thornleigh on about 9.10 on Wednesday morning.

‘The drivers, also both male, have been taken to Westmead Hospital in a stable condition,’ a police spokesperson said in a statement.

The two police officers were injured by a falling tree as they attempted to save motorists in North Ryde at about 6.50am.

A female constable suffered a broken leg, while a male senior constable received minor injuries and is being assessed for a possible concussion. 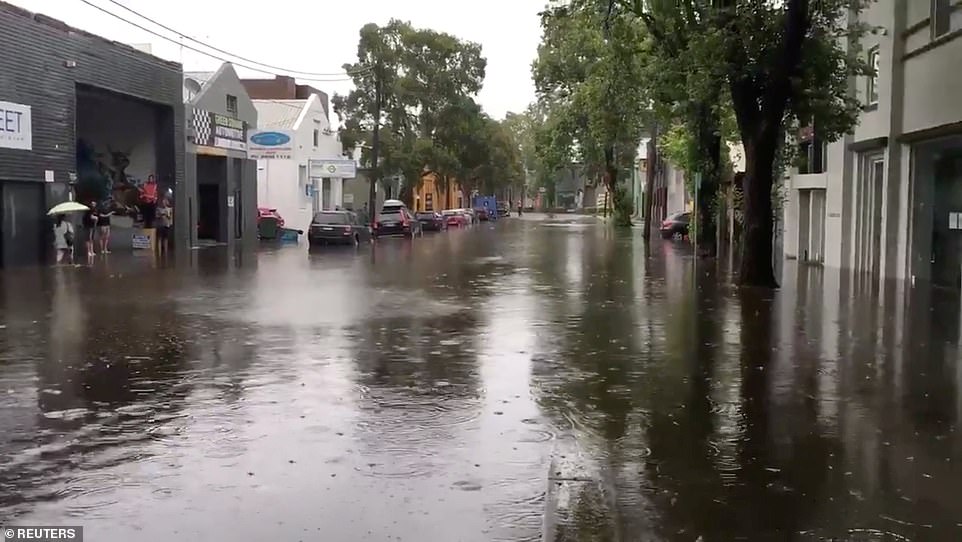 Observatory Hill weather station recorded its monthly average for November in less than two hours, with 84.6mm of rain falling between 5.20am and 7am, beating the month’s average of 83.8mm 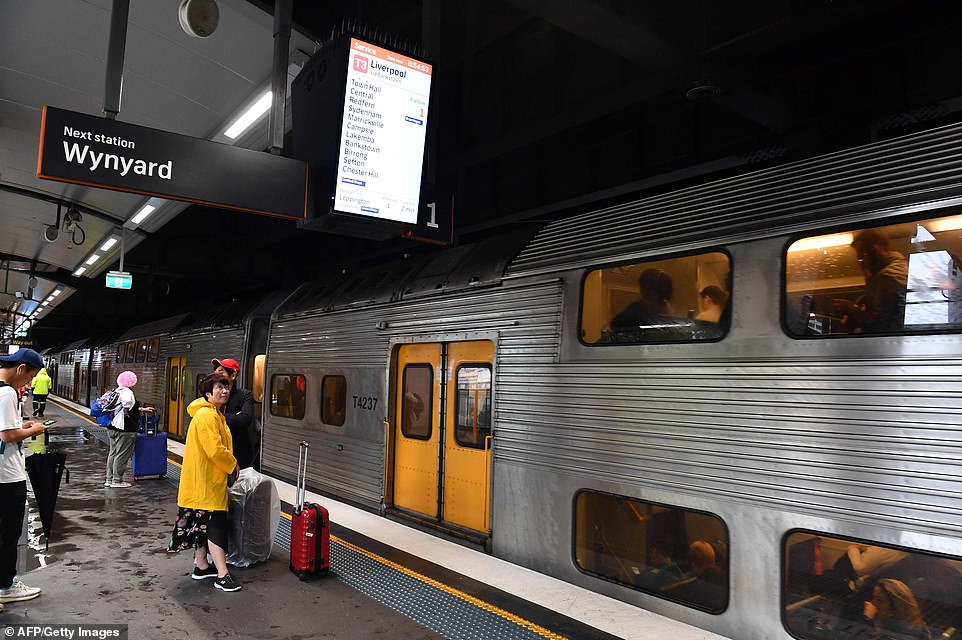 Intense rain affected train services across the city, with some stations suffering flooding 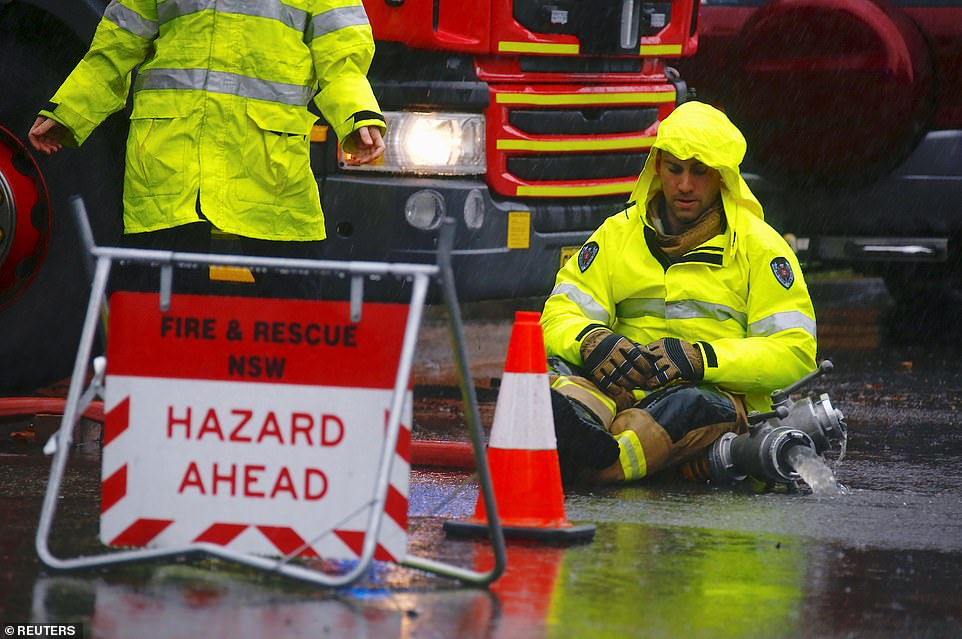 The NSW SES has had more than 500 calls for help and rescued 12 people from floodwaters, mainly in the city’s north 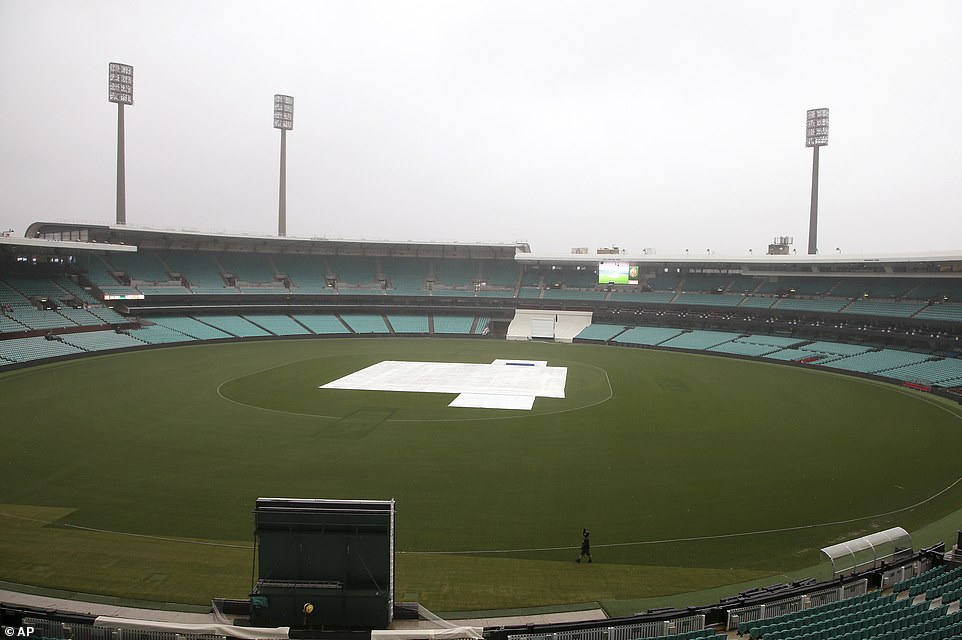 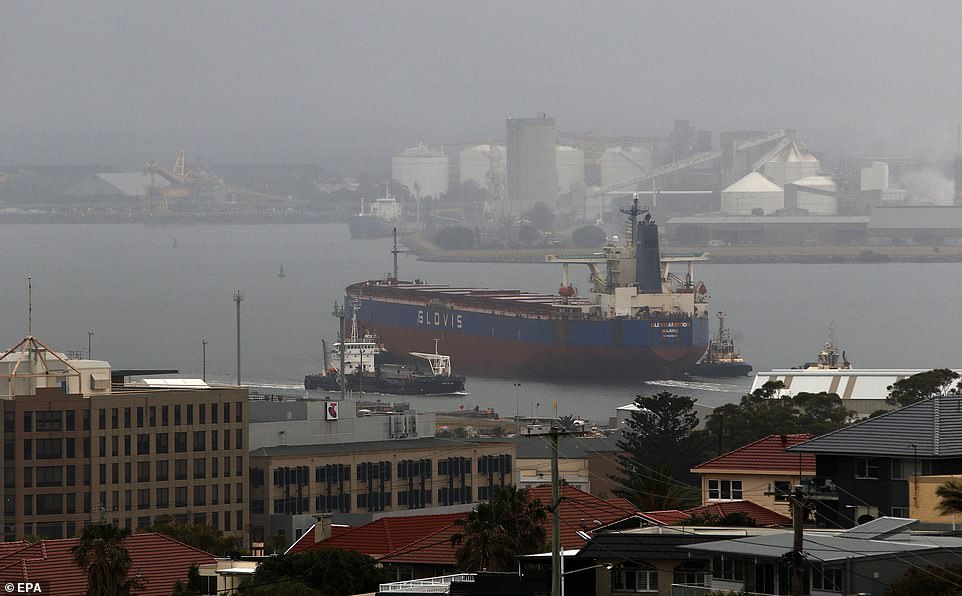 West Pennant Hills in the city’s north-west received 72.5mm of rain in 60 minutes before 6.30am, according to the Bureau of Meteorology, and recorded more than 100mm at 8.30am

The NSW SES has had more than 500 calls for help and rescued 12 people from floodwaters, mainly in the city’s north.

Mr Murphy warned drivers not to attempt to plough through flooded roads.

‘We have said it over and over… they think they know the place and roads and the don’t and they get themselves in huge trouble and that adds to the problem,’ he said. 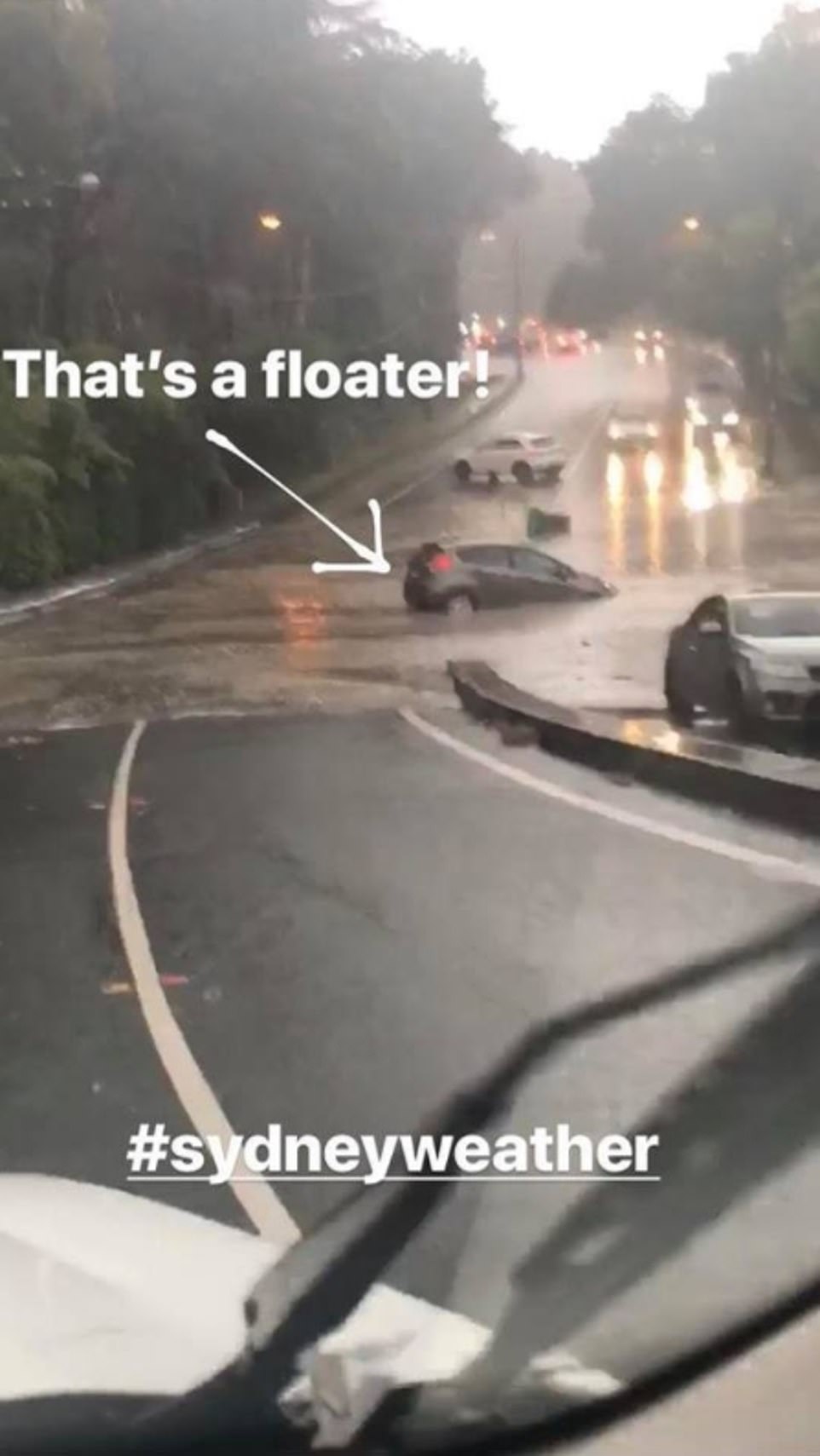 More than 200mm of rain is expected to fall in the city on Wednesday, as building floodwaters forced stranded drivers to be rescued from their cars 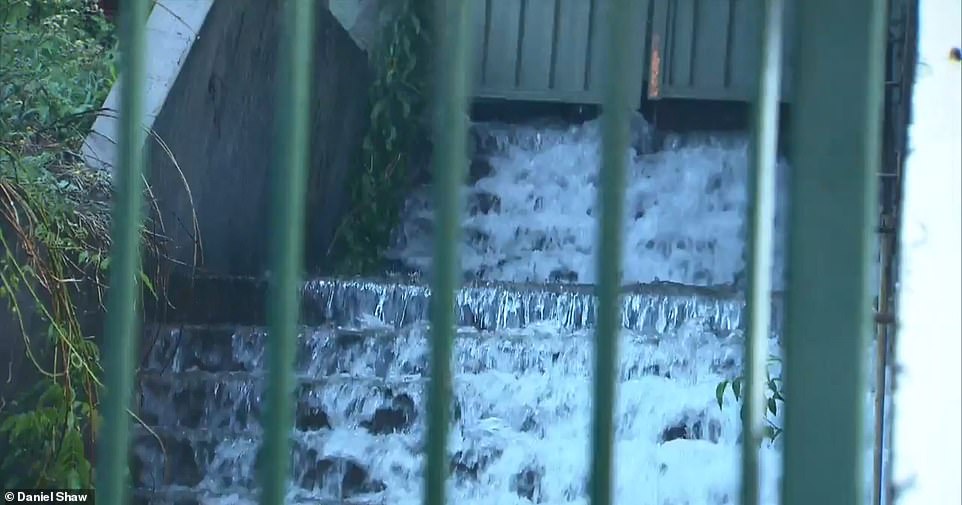 Chaos continues at Sydney Airport, with only one runway likely to remain open for the rest of the day.

Daily Mail Australia reporter Lauren Ferri, who was on a flight home to Sydney from Bali, described hectic scenes at the airport on Wednesday morning.

‘We’ve been sitting on the tarmac for an hour, no one knows what’s going on,’ she said.

‘Everyone’s getting pretty frustrated. There’s nowhere I want to be stuck more during a storm than Sydney Airport’s tarmac in a big metal box.’

Other passengers also vented their frustration about the inclement conditions affecting their travel.

‘I parked and walked from the car park to arrivals and it felt like I was walking through a cyclone. The wind is crazy. They said it would calm a little in the next hour before it gets worse again,’ Romina Rondinelli said. 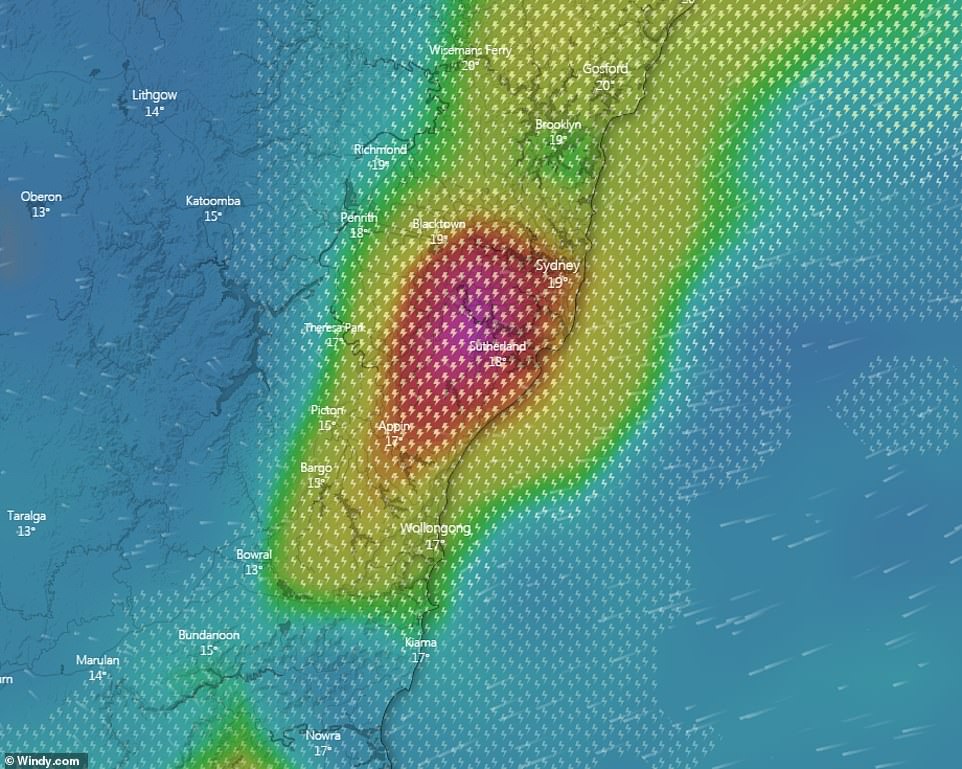 Flights will also be affected by the wild weather as the conditions are too dangerous to fly in, causing chaos at the airport (Heavy rain shown on the map in red) 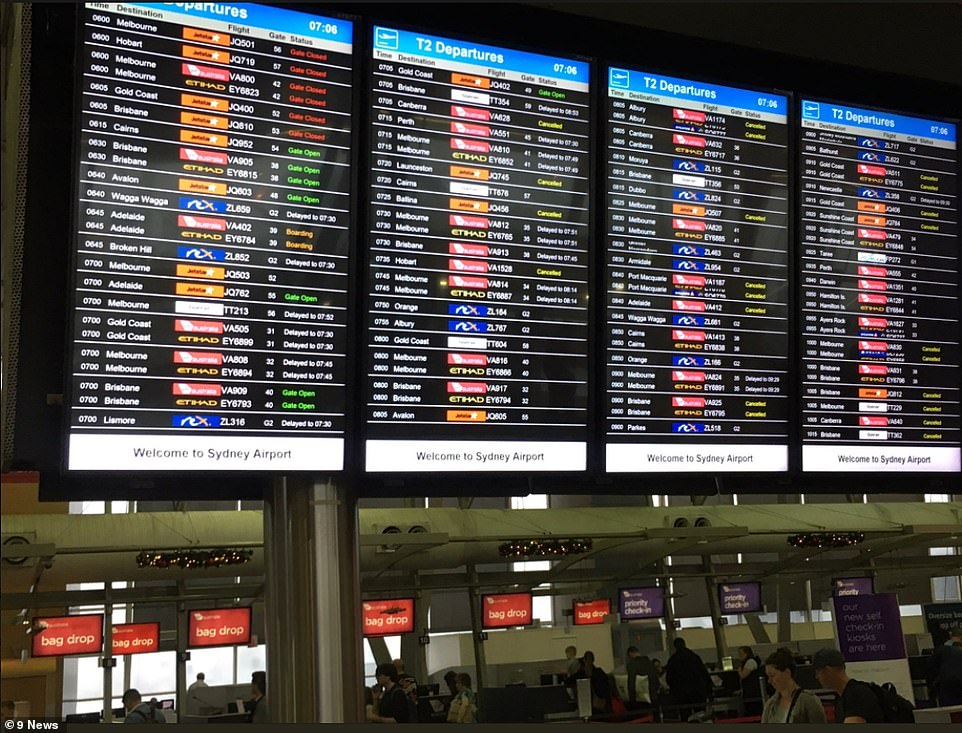 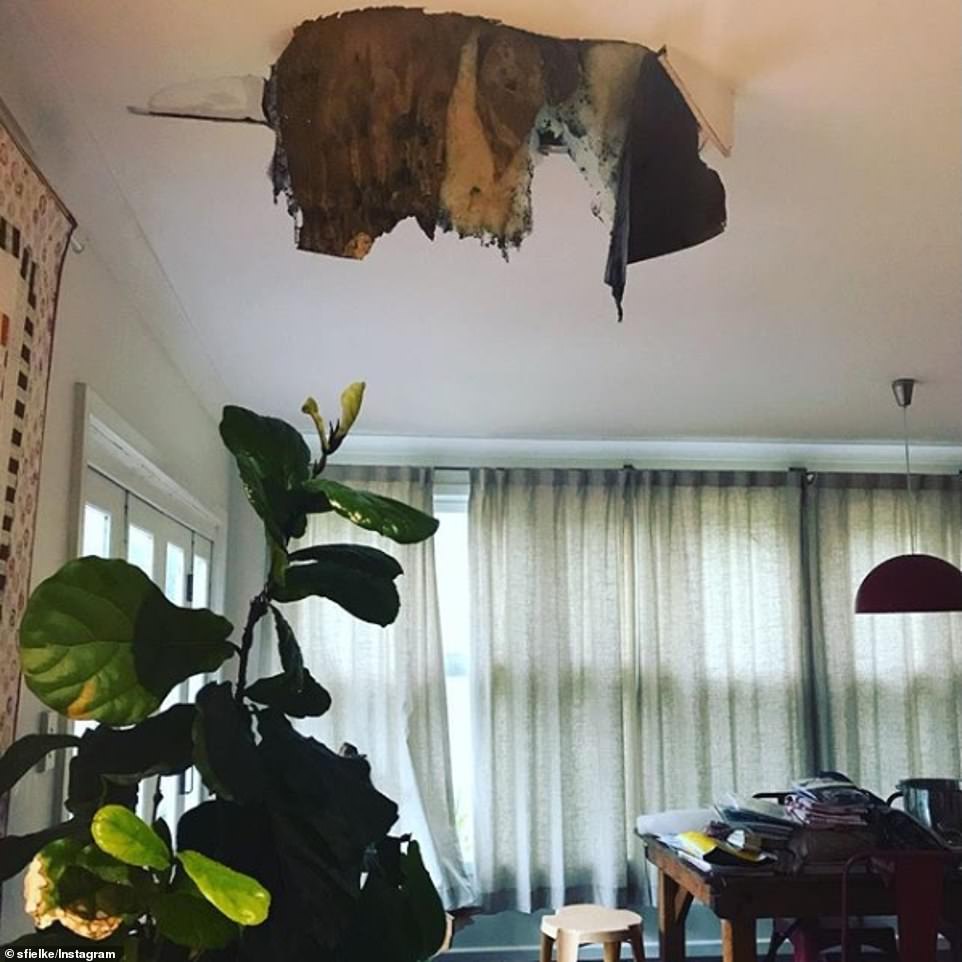 ‘We can actually see across the airport but there’s hope that there’s finally movement after an hour and a half. But some poor blokes like me who didn’t sleep are starting to feel annoyed,’ Marc Ferri said.

A Sydney Airport spokeswoman told Daily Mail Australia the weather was ‘pretty intense’ and that the airport was likely to use just one runway for the rest of the day.

‘We’ve had winds of up to 70km/h, when this happens we go down to a single runway,’ she said.

‘Passengers should check with airlines before coming to the airport, but due to the weather there will be delays and cancellations.’.

Operations at the airport have closed briefly due to lightning striking close to where planes are taking off and landing, Nine News reported. 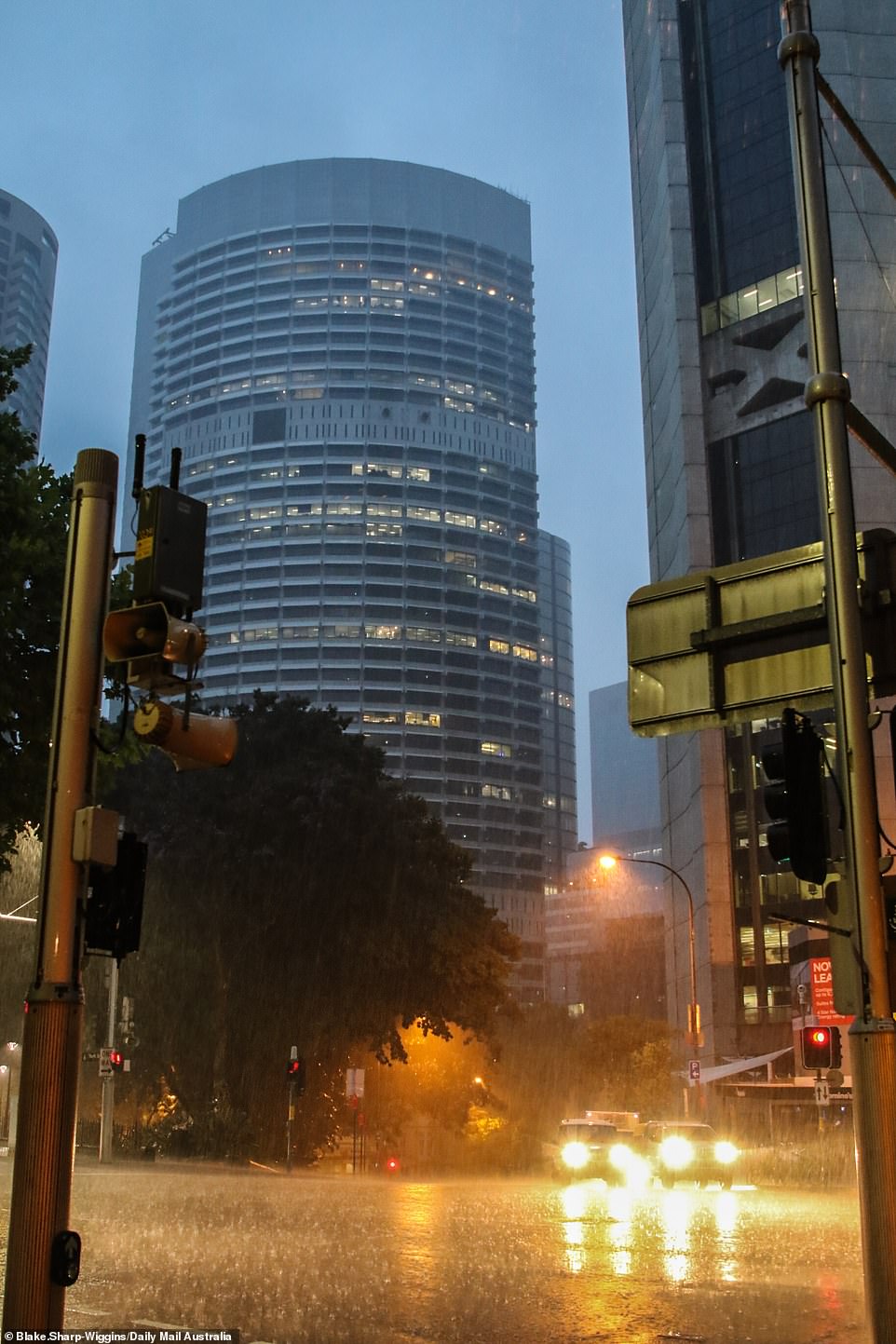 Roads leading in and out of the city were already beginning to flood at 6am, and streets in Roseville, Pennant Hills, Ultimo and Macquarie Park have all been closed.

The Anzac Bridge connecting the inner-west with the city was closed due to flooding, but some lanes have now reopened, with traffic remaining heavy.

All light rail trains have been cancelled due to the weather, the Sydney Morning Herald reported.

Services were earlier suspended between Central and Convention stations due to flooding, while services in both directions between Sydnenham and Campsie were halted.

Buses are being used to replace the cancelled train services.

The rain burst through the roof of Town Hall station, stranding commuters who were left trying to navigate water inside the area.

Some had taken their shoes off and were attempting to move across the water in their bare feet. 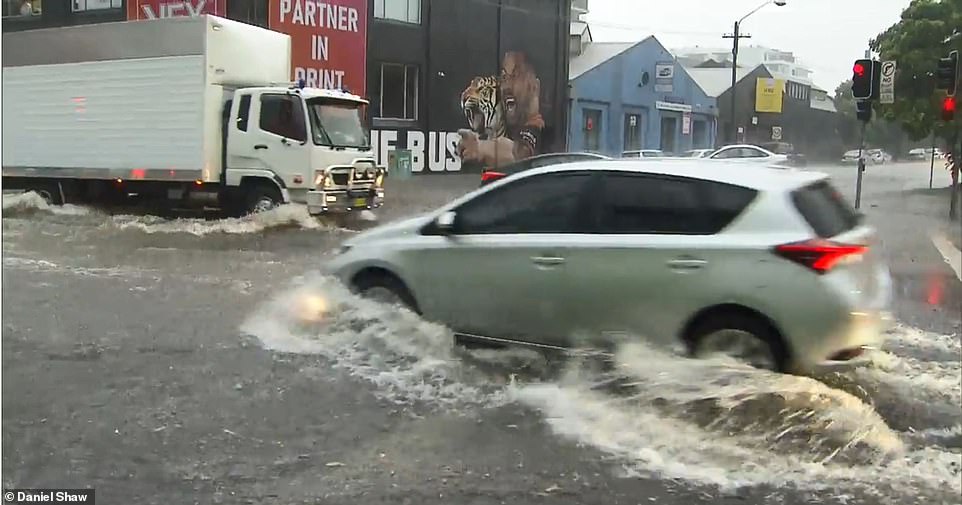 The water has flooded roads across the city, including in the west of Sydney (pictured)

Woolworths supermarket at Town Hall was closed after water was seen pouring out of the walls of the building.

The power was out at Strathfield station, causing chaos as travellers were left in the dark and unable to use ticket gates, which have stopped working.

More than 8100 homes and businesses were without electricity due to the storm, an Ausgrid spokesman told the Sydney Morning Herald.

Ferries on the Parramatta River have been cancelled due to overflowing at the weir, with buses being used to replace commuters travelling between Rydalmere and Parramatta.

Commuters took to social media to share videos of the big wet.

‘My girlfriend is currently trying to swim to work,’ one person posted alongside a video of flooded streets in Glebe.

Schools have also been forced to close due to the conditions, with Georges River Grammar in the city’s south-west shutting on Wednesday ‘for the safety of all staff and students’.