It’s time to get a grip on this blight, says Selina Scott

As a country girl, there’s nothing Selina Scott loves more than enjoying the great outdoors.

But over the past few years, she’s been shocked by the piles of litter strewn across the moors near her home in Yorkshire.

Now the 69-year-old, who became one of the most famous TV faces of the 80s presenting the news and Breakfast Time, has joined the Great British September Clean, organised by Keep Britain Tidy and backed by the Daily Mail.

1980s TV legend Selina Scott has stepped up to support the Daily Mail’s clean up, joining volunteers near her home in Harrogate, North Yorkshire. She said she was ‘delighted’ to be involved in the campaign, claiming the issue of issue has been ‘bugging’ her for several years

Miss Scott said it is ‘not enough to complain’ and called for people to ‘get a grip’ on tackling the litter epidemic.

To that end, yesterday she carried out a litter-pick near her home in Harrogate, North Yorkshire.

She told the Mail she is ‘delighted’ the campaign is still going ahead and added: ‘I have a thing about the filth that people are leaving behind and the litter that’s everywhere. It has been bugging me now for quite a few years.’

She was horrified to hear that, over lockdown, remote areas in Yorkshire – arguably some of Britain’s finest beauty spots – were being used as lavatories and that people were leaving rubbish behind.

Miss Scott said: ‘We’re supposed to love our countryside and appreciate its beauty. We don’t get any more of it – that’s it. We have to look after it.’

One of her pet hates is plastic, especially coffee cups and takeaway trays left for other people to pick up. ‘It’s absolute disregard for the countryside,’ she added.

She told the Mail one of the most distressing things she sees are empty helium balloons which end up scattered across fields.

She has picked up at least 30 while wandering around her home farm and from the nearby road sides. But despite her efforts, and those of local litter picking groups, she says there is a constant ‘tide of litter’ which keeps reappearing.

Her anger is directed at manufacturing companies, who make it ‘too easy’ for people to buy single-use plastic products. ‘Supermarkets should be stopped from selling plastic,’ she said.

‘If we’re serious about a clean and green Britain we should make sure the manufacturers don’t put out this stuff. 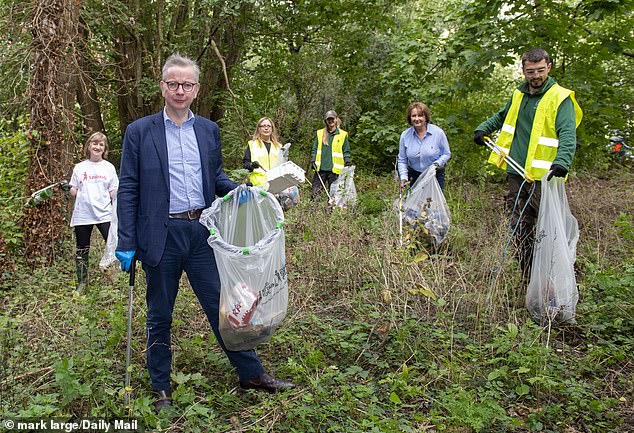 ‘I’m so pleased to hear the Great British September Clean is still going ahead. It does take newspapers like the Daily Mail to make politicians see the problem.’ She added: ‘A lot of the readers of the Daily Mail will be like me – they will take care of the rubbish that they have and they will recycle and they will do all the right things.

‘So in many ways, you’re speaking to the converted. I think the politicians are the ones that need to get people sorted out.’ She recalled a time, just before lockdown, when she travelled to outer Mongolia to source cashmere for her sustainable clothing range, Naturally Selina Scott.

‘There was not one piece of litter anywhere,’ she said. ‘It was pristine. I travelled hundreds of miles and there wasn’t any litter. It is not enough to complain. As a country, we should get a grip.’

Miss Scott started at the BBC aged 29, and co-presented Breakfast Time with Frank Bough – the first breakfast television programme in the UK.

After later presenting The Clothes Show, she crossed the Atlantic to join West 57th, a prime time current affairs show in New York.

She now lives on a 200-acre farm in an Area of Outstanding Natural Beauty and has established a natural fibres business, sourcing sustainable cashmere from Outer Mongolia.