Ivana Trump enjoyed a late night out with friends on Thursday evening as she continues to have a fabulous summer at her home away from home on the French Riviera.

The 70-year-old Czech socialite was seen strolling through the streets of Saint-Tropez with her two companions and her beloved Yorkshire terrier as they made their way to to the town’s new Italian restaurant L’Italien.

Ivana, who is newly single after breaking up with her ex-husband-turned-boyfriend Rossano Rubicondi last month, arrived at the eatery at 9 p.m. and had a lengthy dinner before walking home arm in arm with her friends at 12:30 a.m.

Out and about: Ivana Trump was seen strolling through the streets of the coastal town on the French Riviera with two friends and her Yorkshire terrier on Thursday evening 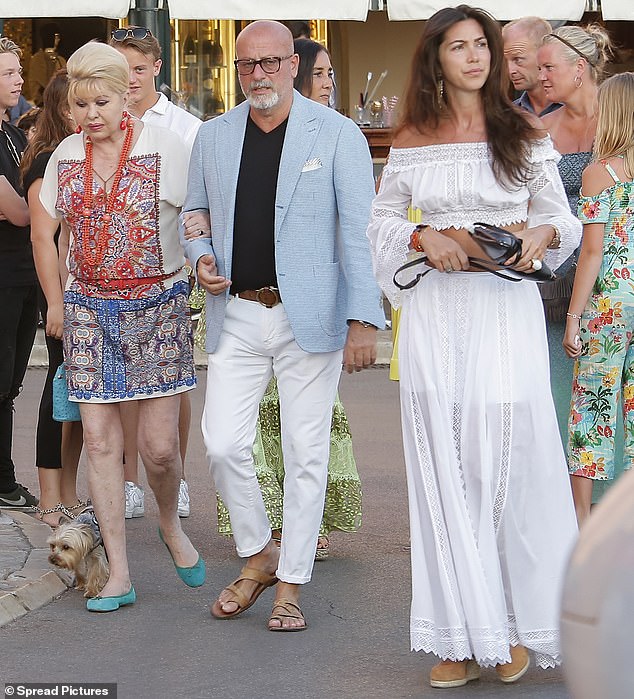 Support: The 70-year-old held on to her male companion’s arm as they headed to dinner 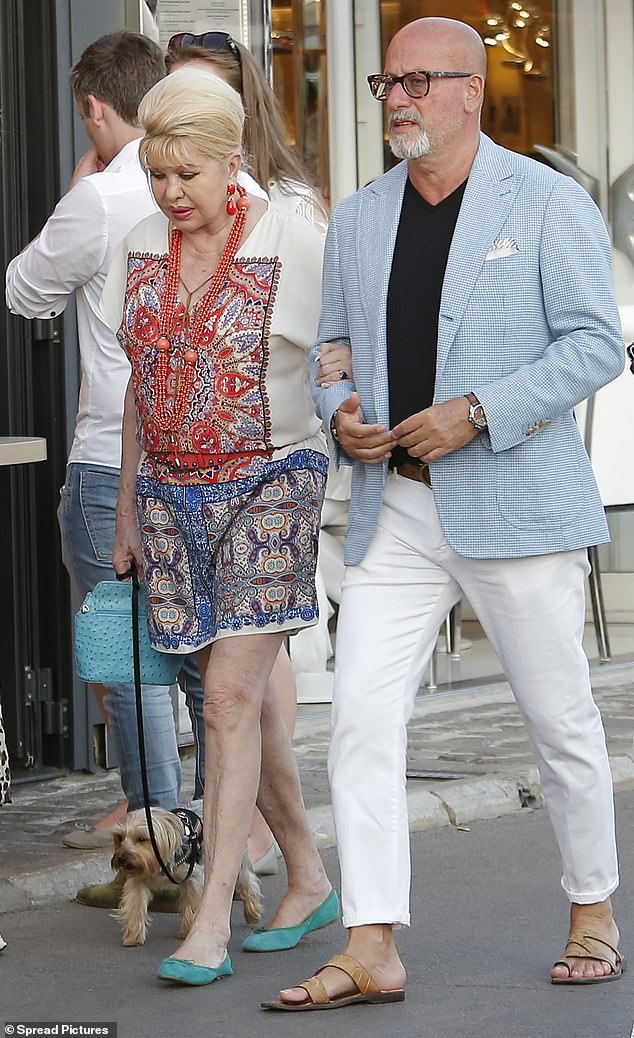 Summer style: Ivana wore a short-sleeve tunic that she cinched at the waist with an orange belt

The former model showed off her summer style in a patterned short-sleeve tunic that she cinched at the waist with an orange studded belt.

She accessorized her breezy frock with a chunky orange beaded necklace and matching drop earrings.

The businesswoman added even more color to her look by sporting turquoise ballet flats and a matching handbag that she carried in her hand along with her dog’s leash.

And, of course, her platinum blonde hair was pulled back in her signature beehive with her bangs framing her face.

She sported thick black liner around her eyes and rosy-pink lipstick, her preferred beauty look in recent years.

Ivana held on to her male friend’s arm as they walked through the crowd, and he looked dapper in a light blue blazer, white pants, and leather sandals. 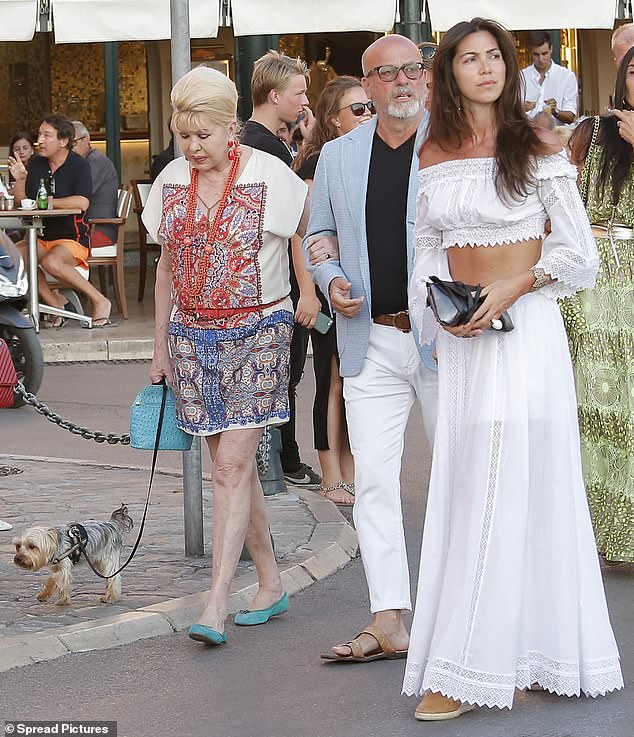 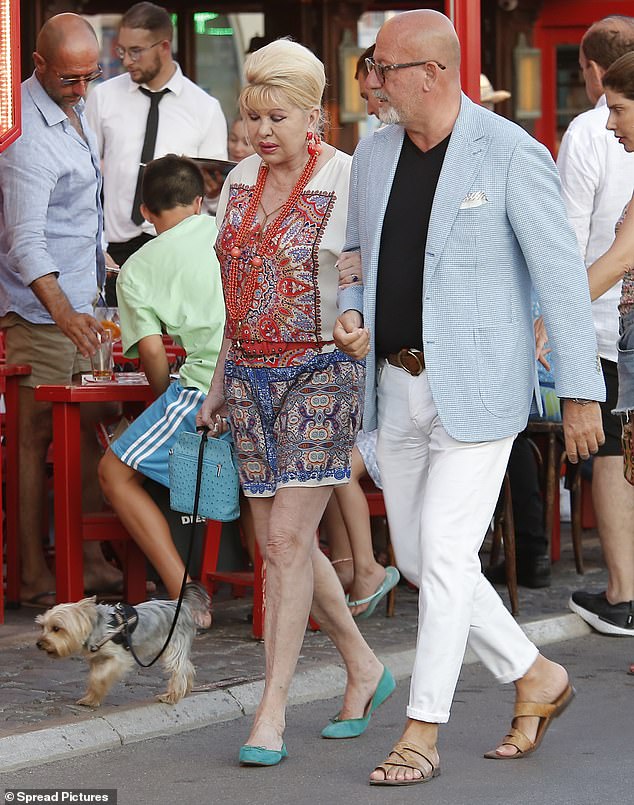 Mixing and matching: The businesswoman added even more color to her look by sporting turquoise ballet flats and a matching handbag

They were also joined by a young woman who showed off her toned stomach and summer tan in a white off-the-shoulder crop top and a matching ankle-grazing skirt that was sheer enough to reveal the white briefs she was wearing underneath.

The mother-of-three and her escort walked into the restaurant first while their female companion followed close behind.

The stunning restaurant, which opened just in time for summer, captures the essence of an Amalfi garden and serves Italian favorites such as pasta, risotto, gnocchi, and Milanese schnitzel.

Ivana and her pals clearly had a great time at the new hot spot, as they stayed there for three-and-a-half hours.

The group was seen leaving after midnight, with Donald Trump’s first ex-wife holding on to both of her friends as they helped her walk over a sidewalk grate and navigate the brick road.

Even her dog seemed a bit tuckered out, as the tiny pooch was carried by her female friend during their evening stroll. 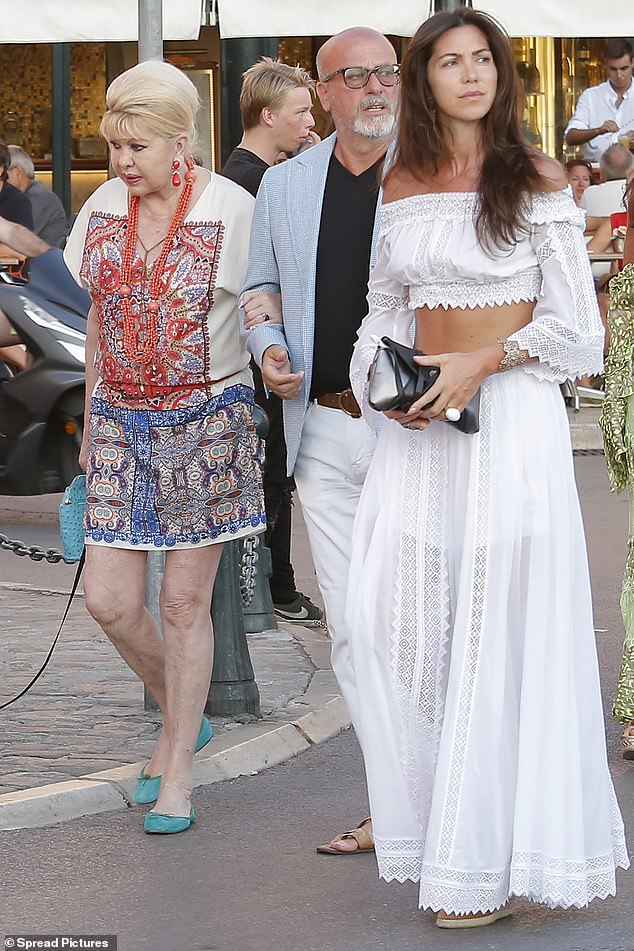 Trademark: The mother-of-three’s platinum blonde hair was pulled back in her signature beehive with her bangs framing her face 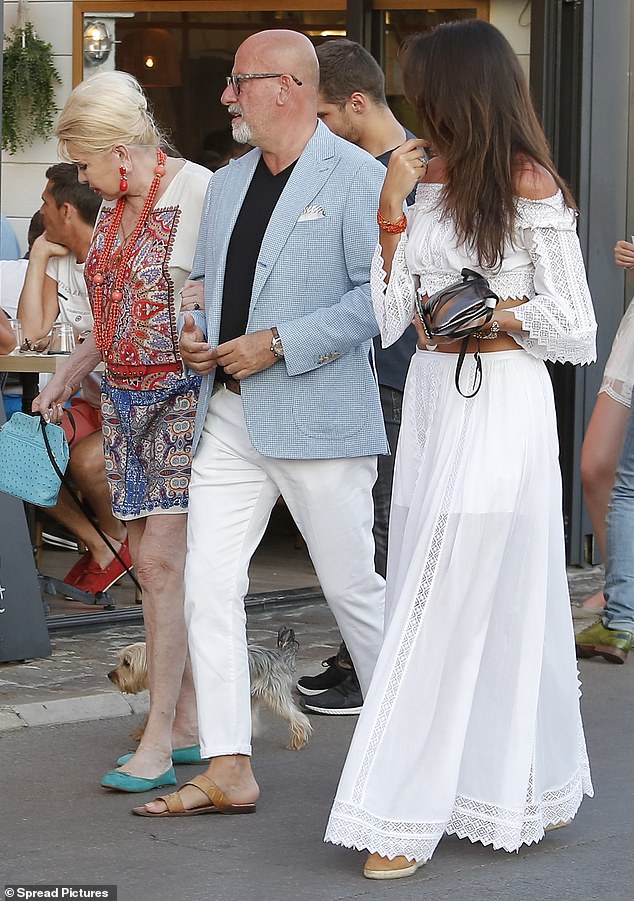 Lots to see: Ivana’s beloved pooch happily trotted alongside her as they passed restaurants and shops during their leisurely stroll 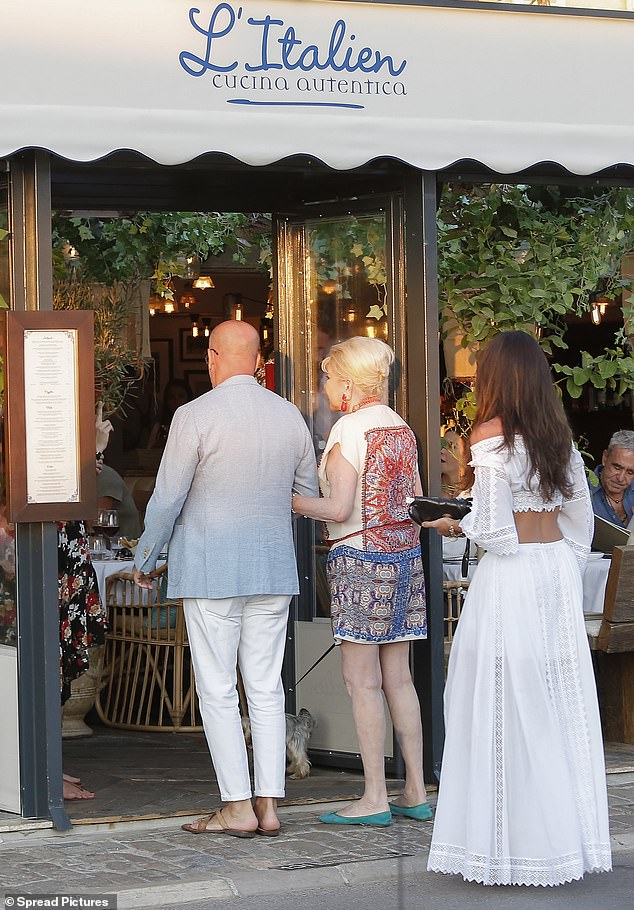 Italian food in France: The group headed to L’Italien for dinner at 9 p.m. The eatery, which opened just in time for summer, serves Italian favorites such as pasta, risotto, and gnocchi

Last month, Ivana insisted she was going to have a ‘fabulous summer’ in Saint-Tropez after her split from her ex-lover, and it looks like she is doing just that.

She was spotted taking a leisurely stroll in the sun-drenched coastal town on the French Riviera in late June, just hours after she had announced that she had broken up with Rossano, 47, and wanted to be ‘a free woman.’

Ivana actually said the time she spends in Saint-Tropez was part of the reason why she and her longtime beau couldn’t make their relationship work.

‘The long-distance relationship really doesn’t work,’ she added. ‘We had a good time and are friends. The split was amicable.’

Rossano, meanwhile, asserted that he has ‘good respect’ for the businesswoman following their breakup, but he later made it clear that her children were a source of ire in their romance. 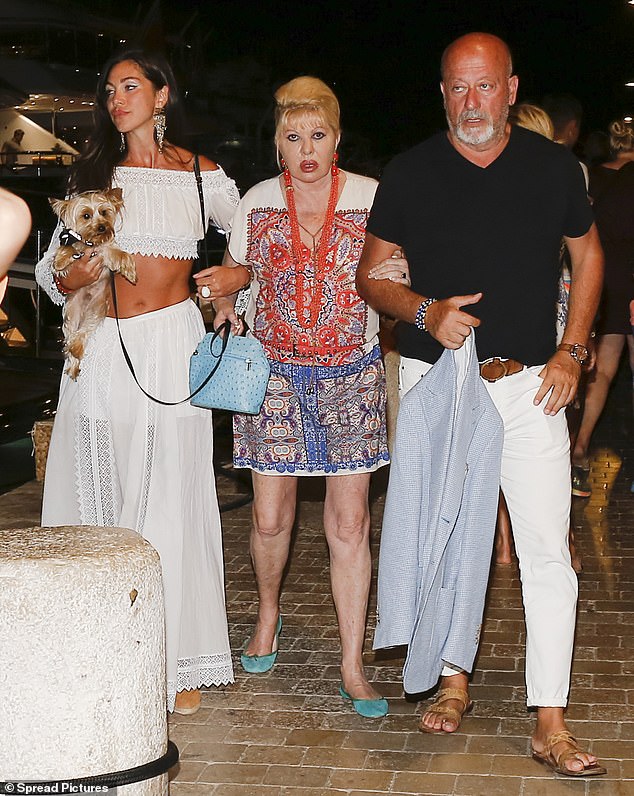 Lengthy stay: Ivana and her friends were seen leaving the restaurant three-and-a-half hours later at 12:30 a.m. 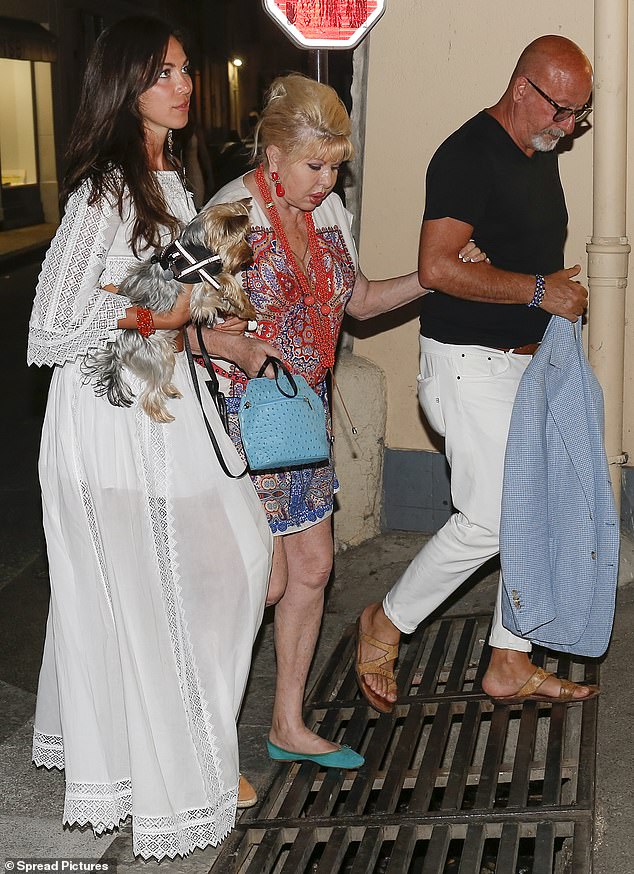 Safe: Ivana held on to both of her companions as they helped her walk over a sidewalk grate 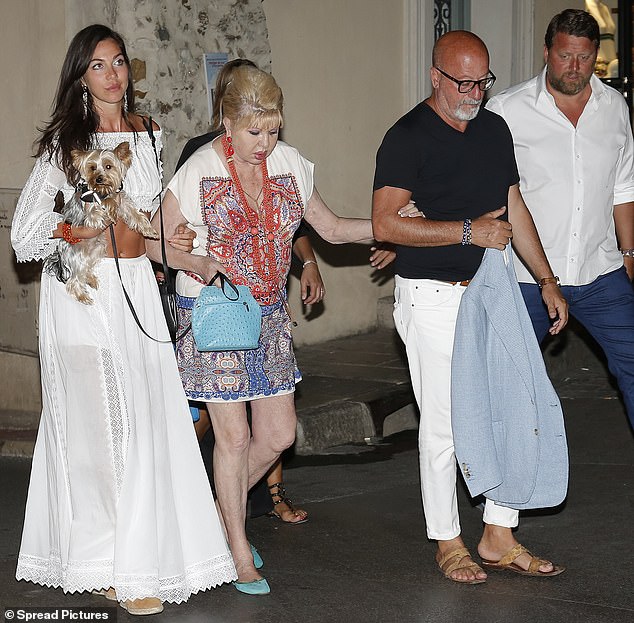 Late night: The former model paid close attention to where she was walking

Ivana’s ex slammed the children she shares with the current president earlier this month, calling them ‘disgusting’ and ‘stupid’ while claiming they had been ‘rude’ to him.

Rossano emphasized that he wasn’t after the matriarch’s fortune and suggested that money was often something he quarreled with her children about.

‘No one touched a dollar or dime from their family . . . I don’t know [if that’s why they didn’t like me], but these people are all about money,’ he added. ‘They don’t have a heart. They are garbage.’

Most of his fury was directed at Donald Trump Jr., whom he labeled an ‘idiot’ and a ‘jerk.’ He specifically asked that the jerk be put in capital letters.

‘They are nobody . . . They are disgusting. We are talking about kids who are so stupid, except Ivanka,’ he continued.

‘They are a piece of scum. Before they say anything about me, I will wash their mouth out with soap! They are disgrace for human being.’ 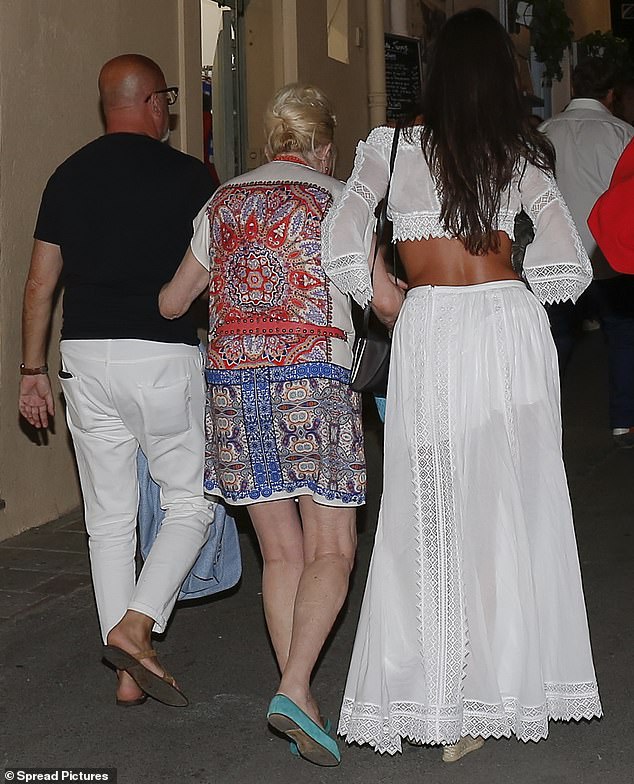 Three musketeers: It appears as though Ivana’s pals stayed by her side for most of their walk 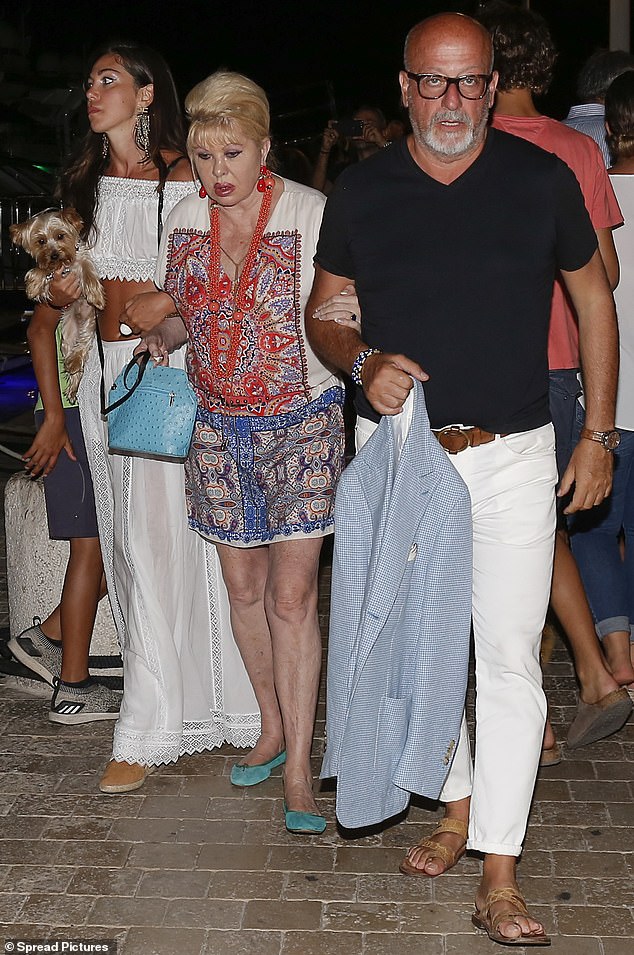 Time for bed: Everyone in the group looked a bit weary after their long dinner 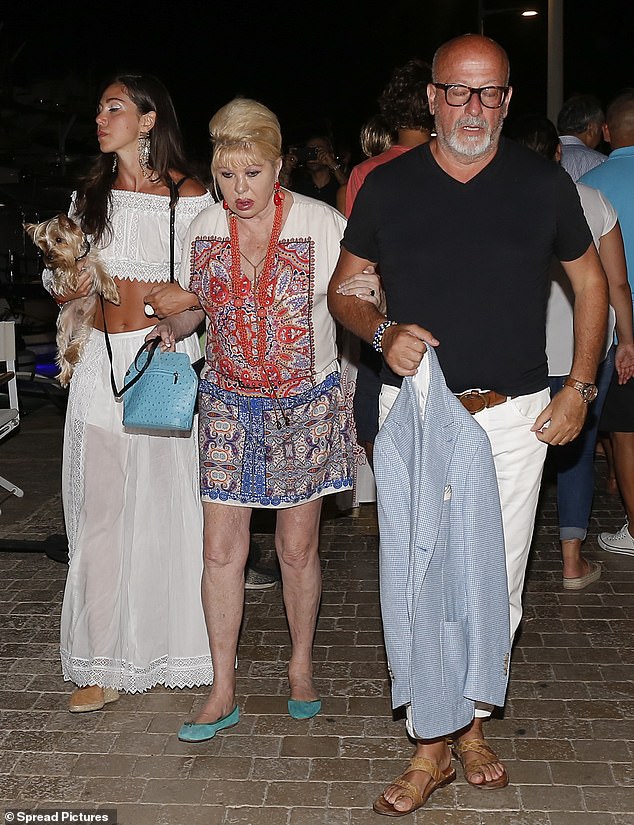 Tired? Even Ivana’s dog seemed a bit tuckered out, as the tiny pooch was carried by her female friend during their evening stroll

Although Ivana claimed their split was ‘amicable,’ Rossano seemed to have a change of heart when news of their breakup made it to the Italian press.

‘Shame on her!’ he reportedly said of his ex.

The former couple dated for six years before they tied the knot in 2008 during a lavish $3 million ceremony at Mar-A-Lago, the Palm Beach estate owned by none other than Ivana’s second ex-husband, Donald Trump.

Ivana said she had actually filed for separation three months prior and blamed the split on her and Rossano’s different preferences for their cities of residence.

The couple had faced rumors that Rossano had been unfaithful to her while filming the TV show Survivor in Honduras, which Ivana denied in her Page Six column just a month before announcing their split. 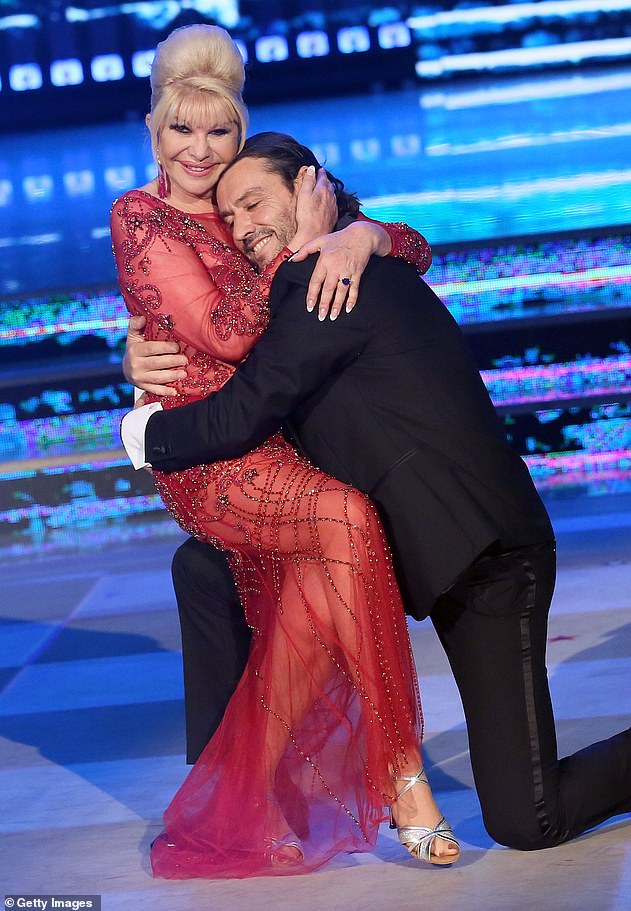 Over: Ivana announced last month that she and her ex-husband-turned-boyfriend Rossano Rubicondi, 47, had broken up. They’re pictured on Italy’s Dancing with the Stars last year 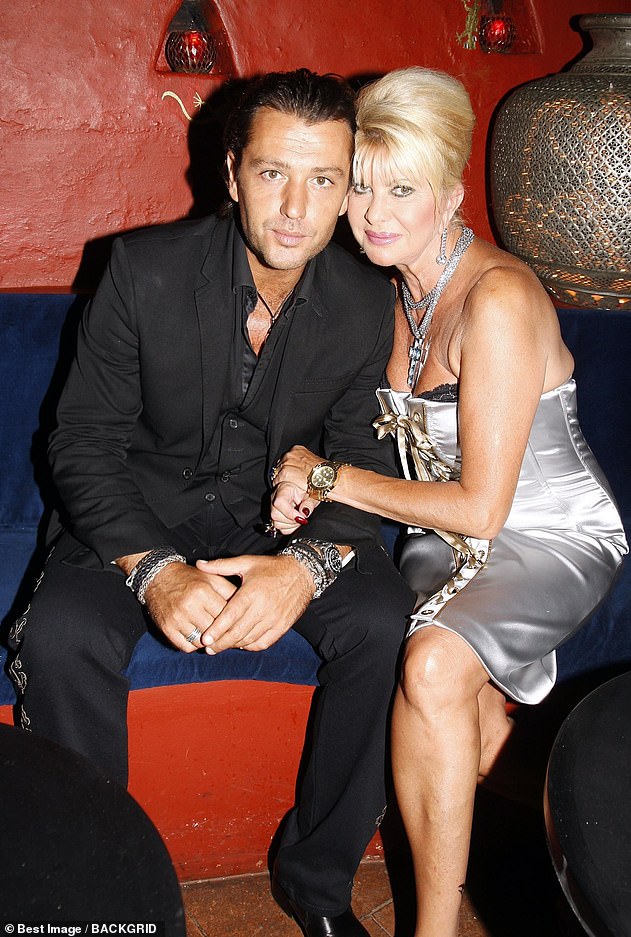 Look of love: The former couple, pictured in 2007, dated for six years before they tied the knot in 2008. They divorced just months later in 2009, only to reunite shortly after 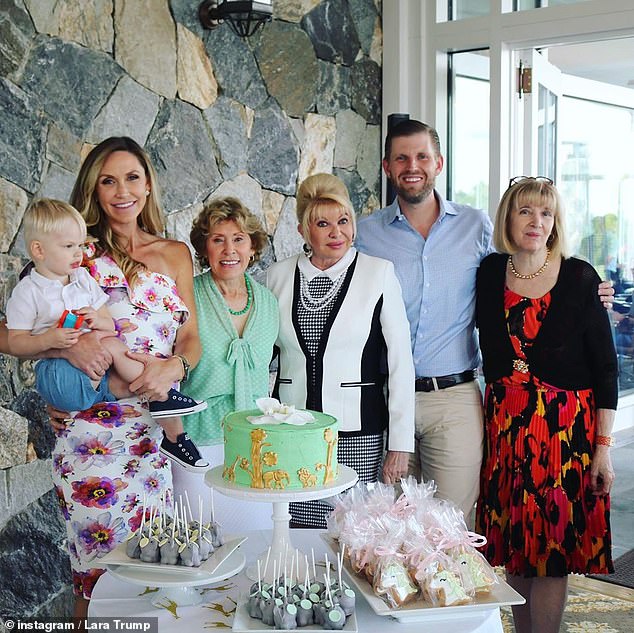 Family: Ivana recently attended a baby shower for her son Eric’s wife, Lara. She posed for a photo with the couple; their son, Luke; Lara’s mother, Linda Ann Sykes; and Eric’s former nanny

Rossano was Ivana’s fourth husband after Alfred Winklmayr, Donald, and Riccardo Mazzucchelli, but the two didn’t stay apart for long.

They reunited shortly after their divorce and spend a great deal of time together until Ivana announced last month that she had broken up with him.

‘I am once again a single woman,’ she said. ‘I have the freedom to do what I want, with whomever I want to, and I can afford my lifestyle.’

The Raising Trump author’s kids — Donald Jr., Ivanka, and Eric — are all grown up now with children of their own, and Ivana stressed that she has no desire to get married again nor does she really have an interest in dating.

‘I don’t want to get married again,’ she told Page Six. ‘I’m done. You get married because you want a family. I have three kids and grandkids. I just want to be free and go where I want to go with whoever I want. I want to be a free woman.’

The socialite went on to say that while she doesn’t want a boyfriend, she does ‘like to have companions’ to spend time with.

‘I have plenty of men who take me for lunches and dinners and balls or charity events,’ she explained. ‘I don’t want to be attached.’