Ivanka Trump, the daughter of the president, went head to head with liberal star Alexandria Ocasio-Cortez when she slammed one of the central tenets of the self-described socialist’s agenda.

Trump, who is a counselor to President Trump, took a dig at Ocasio-Cortez’s guaranteed work clause in the Green New Deal the Democratic congresswoman has made her signature issue.

‘I don’t think most Americans, in their heart, want to be given something. I’ve spent a lot of time traveling around this country over the last 4 years. People want to work for what they get,’ Ivanka Trump told Fox News. ‘So, I think that this idea of a guaranteed minimum is not something most people want. They want the ability to be able to secure a job. They want the ability to live in a country where’s there’s the potential for upward mobility.’ 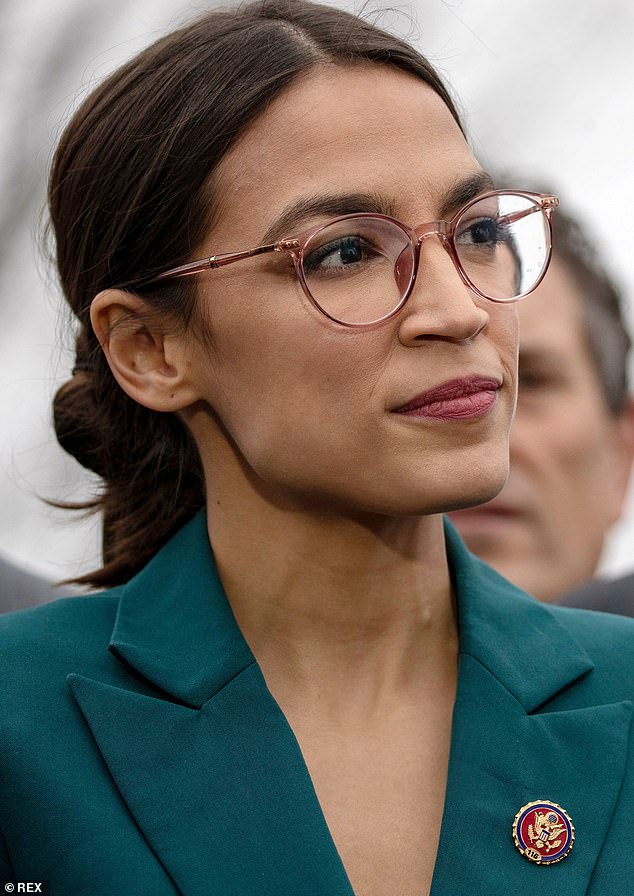 Rep. Alexandria Ocasio-Cortez has made the Green New Deal her signature issue and one of its goals is to provide every American with a job and health care

The disagreement pits the president’s daughter, who is becoming a highly sought surrogate among Republicans on the campaign trail, against the youngest member of Congress, who is seen as energizing the liberal left wing of the Democratic Party.

Ocasio-Cortez, a freshman lawmaker from New York, is pushing the Green New Deal – a statement of goals and doesn’t make specific policy proposals, nor does it specify how it would pay for its ambitious plans.

One of its goals is to provide every American with a job and health care.

The plan also aims to slow climate change by ending the reliance on fossil fuels within 10 years; to upgrade power grids and existing buildings for maximum energy efficiency; and to overhaul transportation systems.

The contest for the Democratic presidential election next year is expected to be a clash between the liberal leanings of Ocasio-Cortez and other Democrats like Bernie Sanders versus the more moderate tones of Democrats like Joe Biden and Amy Klobuchar.

‘I think fundamentally if you ask yourself the question, ‘are we better today than we were yesterday or we were 2 years ago?’ The answer is, undoubtedly, yes,’ Trump said. ‘So, as an American, families sitting down and thinking about their financial situation relative to a month ago or a year ago, America is doing very well and it stands in quite sharp contrast to the rest of the world. So, not only are we doing well, much of the world has slowed down in terms of the pace of their growth.’

Trump and Ocasio-Cortez do have one thing in common – their use of social media to promote their brand and message.

Both frequently use their instagram accounts to communicate but Ivanka Trump leads in followers with 4.7 million compared to Ocasio-Cortez’s 2.5 million.