Ivanka to push tax reform instead of doing Asia trip

First daughter and White House aide Ivanka Trump won’t accompany her father President Trump on his 12-day trip to Asia, instead heading back state-side after delivering a speech in Japan.

Axios reported Tuesday that Ivanka Trump, along with Treasury Secretary Steven Mnuchin and economic adviser Gary Cohn, will hold tax reform events in the U.S. instead, laying the public opinion groundwork with voters while President Trump is away.

The White House wouldn’t confirm the report with a senior administration official telling reporters after the story broke that casting decisions for the Asia trip would be announced by National Security Advisor H.R. McMaster later this week.

First daughter and White House adviser Ivanka Trump will give a speech in Japan, but won’t accompany her father on his 12-day journey through Asia, Axios reported Tuesday, as she’ll stay home and focus on tax reform 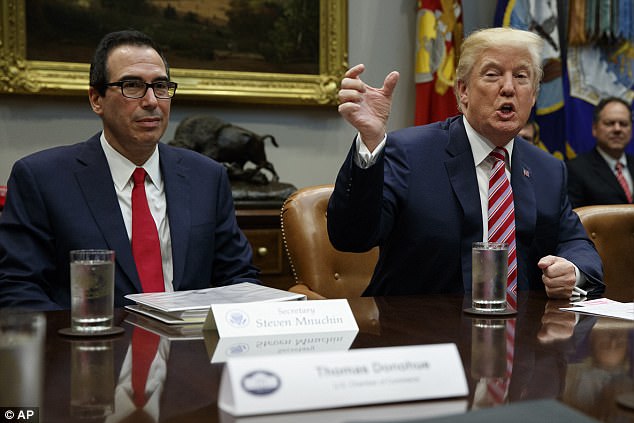 President Trump (right) confirmed Tuesday, in a meeting with business leaders, that Treasury Secretary Steve Mnuchin (left) would be among the administration officials staying back to push tax reform efforts 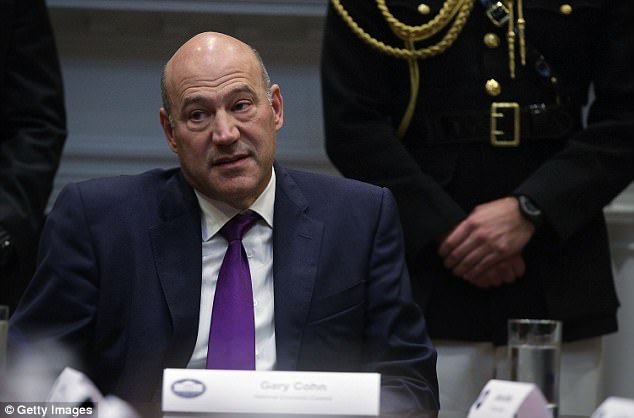 ‘I’m not going to go into the specifics of who’s where, and when, and at what stop, I’ll leave that to later this week with General McMaster,’ the official told journalists at a Tuesday morning briefing.

But in the Roosevelt Room about an hour later, the president confirmed that at least Mnuchin and Cohn will be staying home.

‘While I’m in Asia, members of my cabinet will be traveling all around the country talking directly to taxpayers and focusing on the regional media, which we’ve found to be much more credible media to be honest with you,’ Trump first said.

He then motioned to Mnuchin and Cohn, who were both attending the meeting, alongside business leaders, who Trump assembled to talk tax reform.

‘They’ll be staying here and will continue to work closely with all of you,’ Trump pledged.

The president, however, did not mention his daughter’s plans and she wasn’t on hand at the Tuesday meeting.

A White House official did tell DailyMail.com last week that Ivanka Trump would deliver a speech on November 3 to the World Assembly for Women in Tokyo, two days before her father’s arrival.

The first daughter had accepted an invitation from Japanese Prime Minister Shinzo Abe.

A spokesperson for Ivanka Trump couldn’t say last week if the first daughter would be accompanying her father past Tokyo.

At the same time, Politico reported that Ivanka’s husband Jared Kushner, also a White House senior adviser, will play a diminished role in the administration’s China policy, and thus may also not stay on for the full duration of the trip.

A trip to China for Ivanka Trump could also be bad for optics, as her Chinese clothing factories have attracted negative headlines in recent months.

Axios reported that Ivanka Trump had canceled meetings in both China and South Korea that she had previously booked.

Both Ivanka Trump and Kushner accompanied the president on his two previous foreign trips, though they broke off to spend a date night in Rome in May, before peeling off and heading back to the United States.