Jared Kushner and Ivanka Trump have been spotted romantically walking hand-in-hand in Germany enjoying a couple’s night out after attending the Munich Security Conference.

The loved-up couple seemed carefree and happy as they smiled for cameras and walked through crowds flanked by their security detail.

Meanwhile across the globe back stateside, furious Trump protesters were rioting in New York and D.C. after President Donald Trump he’ll declare a national emergency in order to get his controversial U.S.- Mexico border wall.

Despite the clamor against her father, Ivanka looked carefree as she went out to dinner with her husband at the Wienerschnitzel the Bavarian Restaurant Spatenhaus on Friday evening. 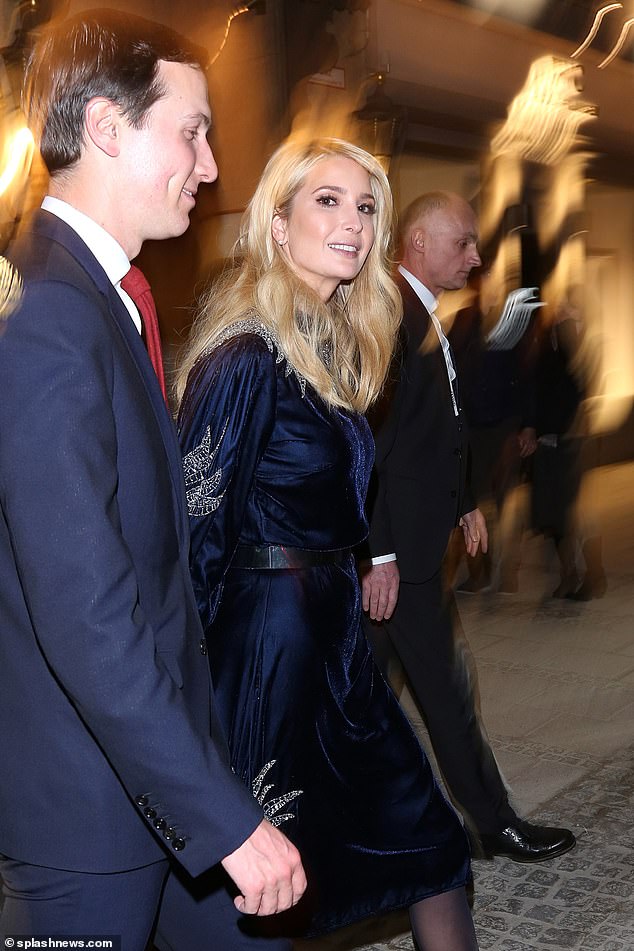 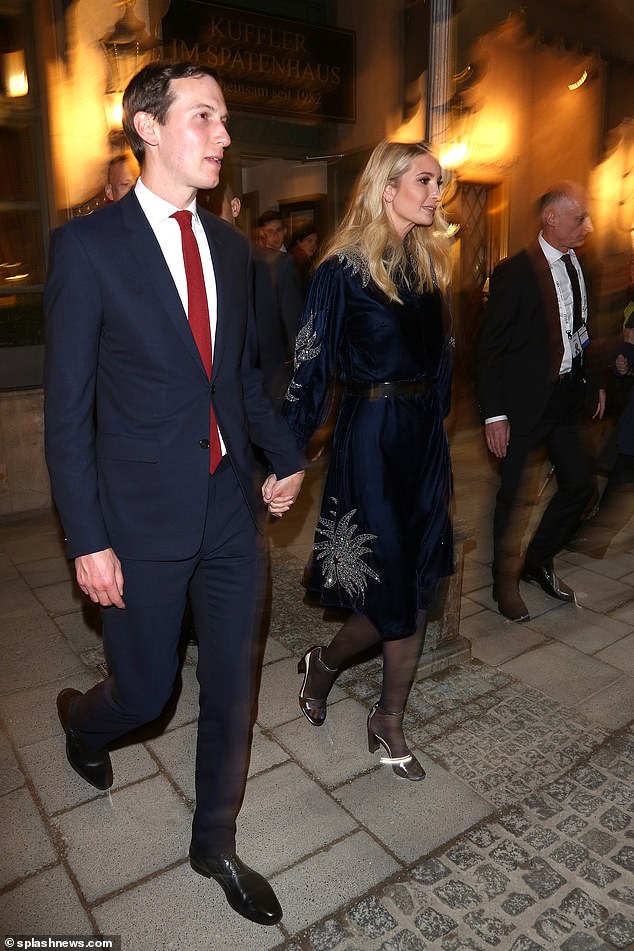 Hand-in-hand they strutted through the cobblestone streets of Munich, Germany

The couple were in Germany to attend the Munich Security Conference where Ivanka discussed global women’s economic empowerment and defense policy.

The couple looked star-eyed and loved up as they headed out for dinner and through the cobblestone streets of the historic city.

Earlier on Friday the president’s daughter attended the Munich Security Conference where she met with various leaders and sat down for one-on-one time with Estonian President Kersti Kaljulaid and Minister of the French Armed Forces Florence Parly.

Ivanka gushed about the conference on Twitter boasting about her productive meetings.

The conference started on Friday and will end on Sunday. 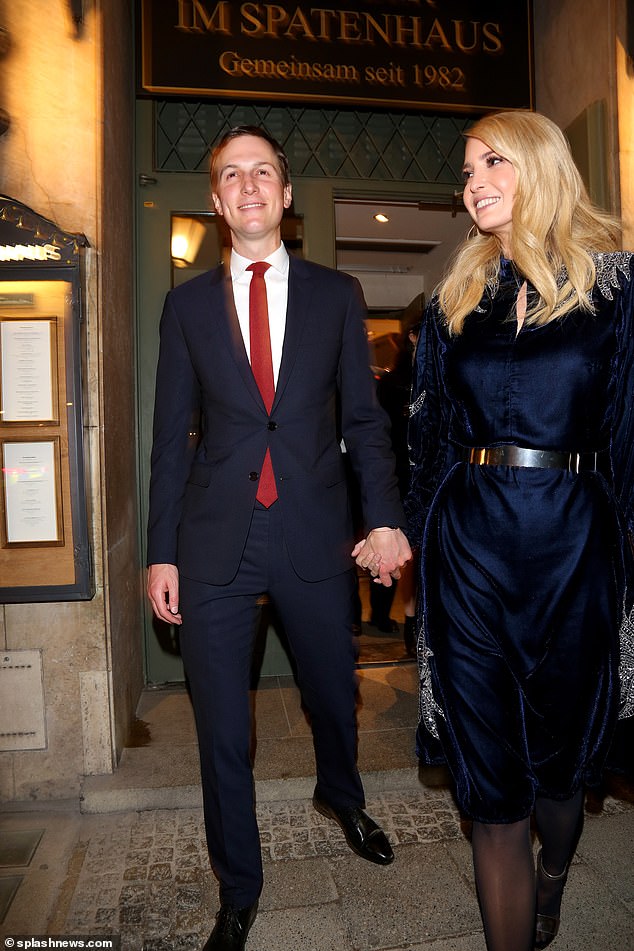 The two stepped out, seemingly oblivious to the protests taking place back stateside after President Donald Trump announced a national emergency at the U.S.-Mexico border 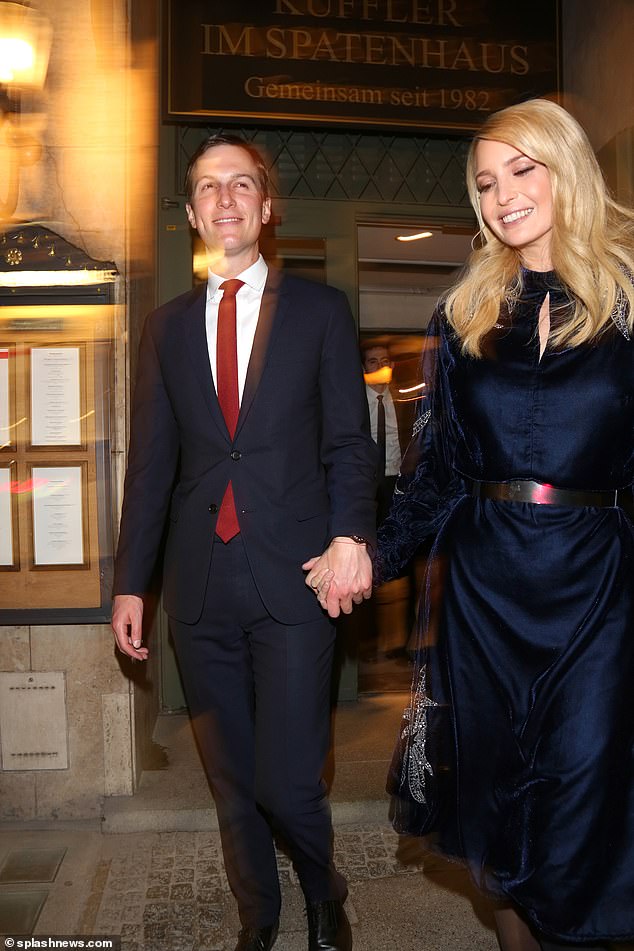 Cheesing! The duo held hands as they enjoyed a night out, just the two of them without their kids 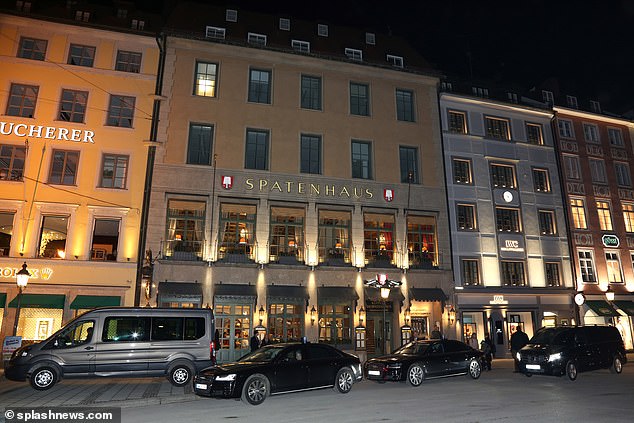 They enjoyed a fancy dinner at Spatenhaus, a famous Bavarian restaurant in Munich

On Friday the president sparked outrage when he proclaimed a national emergency on the border after he signed a bill that would avoid a second government shutdown, but it didn’t give him the funds to build his dream wall.

It was a calculated move that would allow him to spend $8billion on building his wall.

‘We’re going to be signing today, and registering, national emergency. And, it’s a great thing to do, because we have an in of drugs, invasion of gangs, invasion of people, and it’s not acceptable,’ the president said on Friday.

Congress appropriated $1.375 billion that Trump can use for ‘bollard’ fencing in a spending bill that has not reached the president’s desk, yet, but is expected to make its way to him before funding for a host of federal agencies runs out at midnight.

As a result, angry protesters took to the streets of New York with blaring signs that read ‘No Wall No Way’ and ‘Abolish I.C.E.’

Others held signs saying ‘Trump is the emergency’, pointing out that the president created the crisis at the border that’s separated hundreds of migrant families seeking asylum.

Rioters flocked to the president’s Trump Tower property in Manhattan on Friday night. 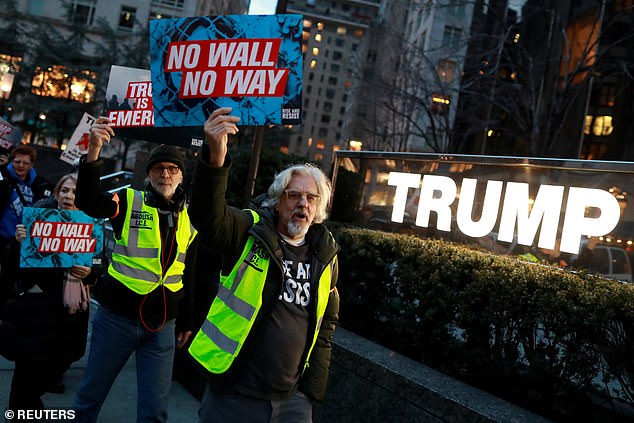 Meanwhile in New York, protesters were rioting outside the Trump Tower 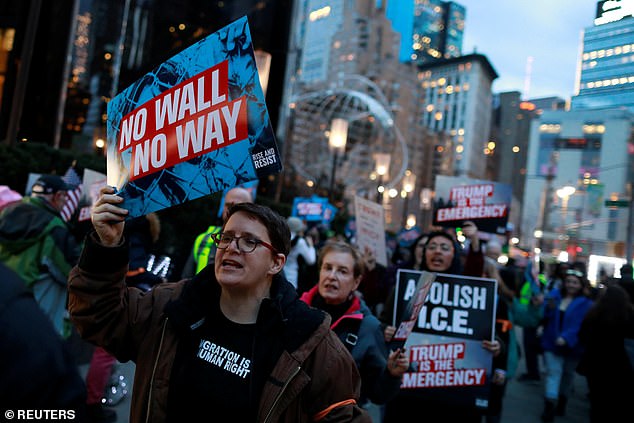 Angry protesters took to the streets of New York with blaring signs that read ‘No Wall No Way’ and ‘Abolish I.C.E.’ 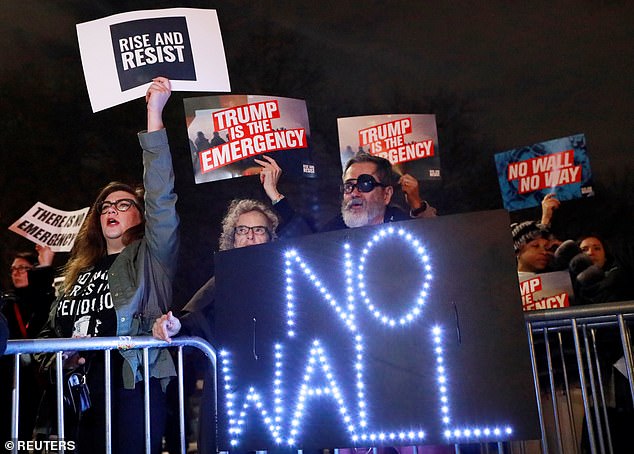 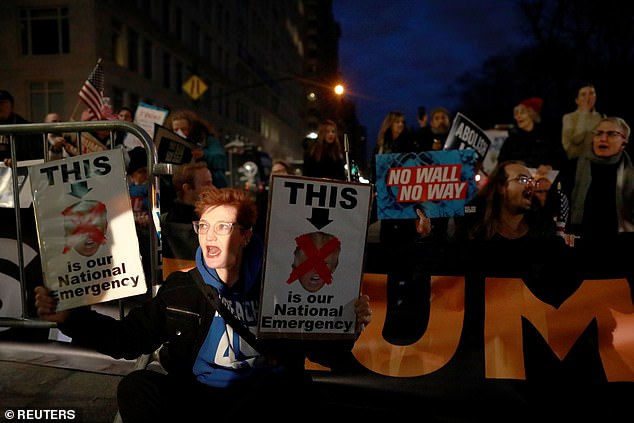