Ivanka Trump and Jared Kushner head to the White House

Ivanka Trump and her husband Jared Kushner were spotted up bright and early Monday as they headed to work at the White House.

The smiling pair were spotted stepping out of their Washington DC home before they were whisked away by waiting secret service agents.

It came just hours after Ivanka and Jared – both advisers to President Trump – returned on Sunday from a weekend getaway at Camp David.

The couple were joined by their three young children, as well as President Trump, First Lady Melania and their son Barron Trump.

Ivanka’s shy daughter Arabella was spotted hiding from the cameras as the first family stepped off Marine One onto the White House’s South Lawn.

The six-year-old held her father Jared’s hand and ducked her head as they walked back towards the White House.

Ivanka had her hands full when she landed, smiling as she carried her one-year-old son Theodore on her hip and holding the hand of her three-year-old son Joseph. 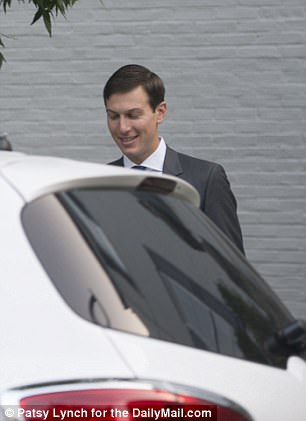 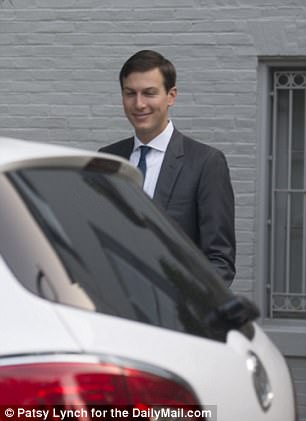 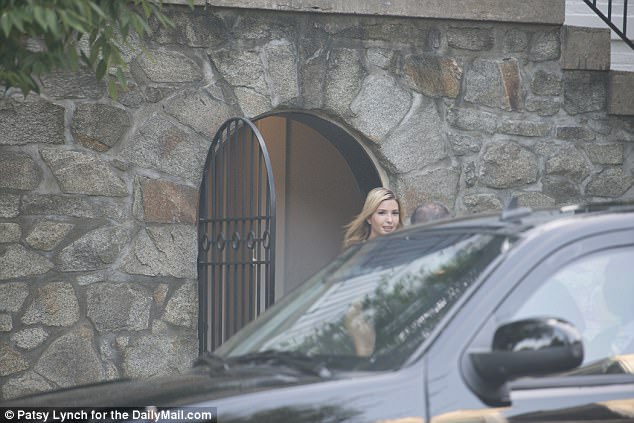 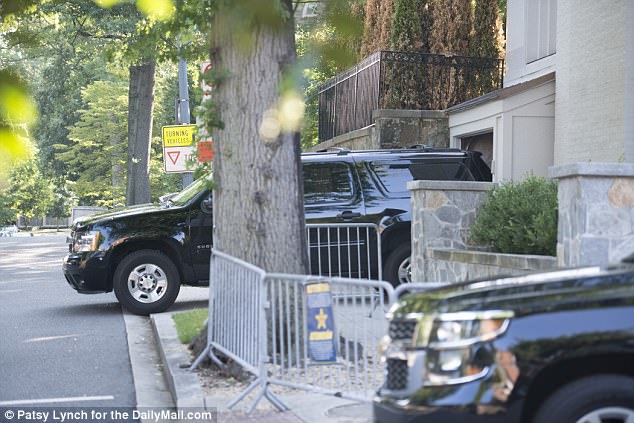 Despite her cheery yellow frock, Arabella seemed glum after arriving from the brief weekend trip to the Maryland retreat.

Ivanka followed closely behind her husband and daughter, sporting an all white look with a preppy striped cardigan hanging around her shoulders.

Ivanka and her family disembarked with her father, Melania and 11-year-old Barron.

Trump was wearing a ‘USA’ cap, the same one he was spotted wearing when he was meeting with officials about Hurricane Harvey on Saturday.

Melania looked chic in an all pink ensemble, with a checkered button-down shirt paired with fuchsia jeans and hot pink flats. 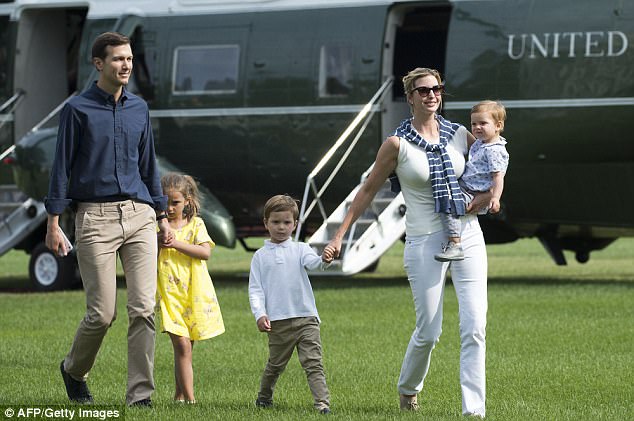 Ivanka’s shy daughter Arabella, six, hid from cameras when she returned to Washington DC on Sunday from a weekend getaway at Camp David 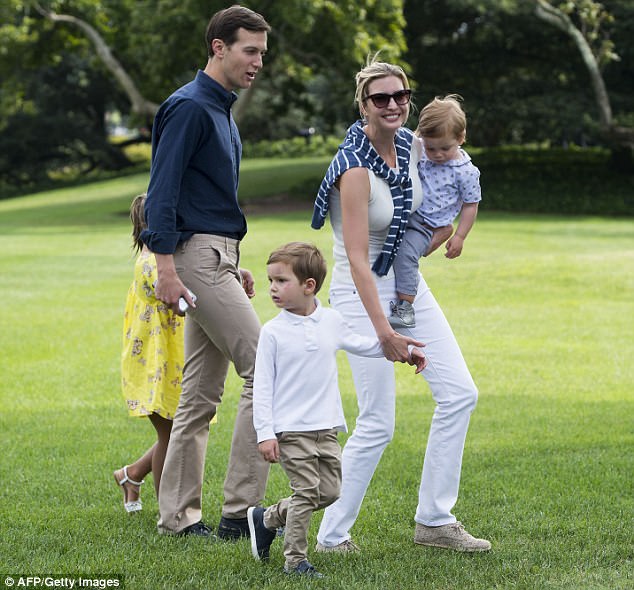 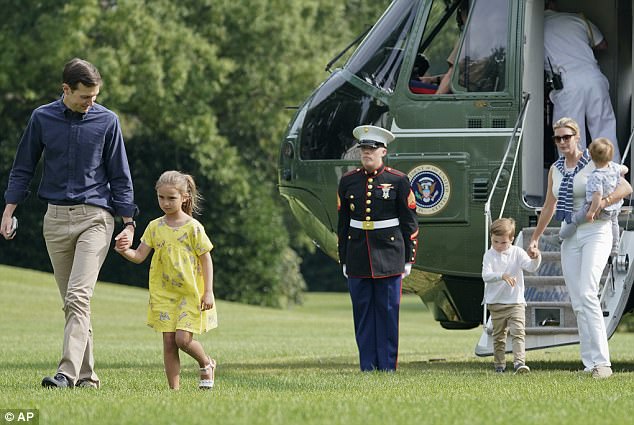 Despite her cheery yellow frock, Arabella seemed glum after coming back from the brief weekend trip to the Maryland retreat 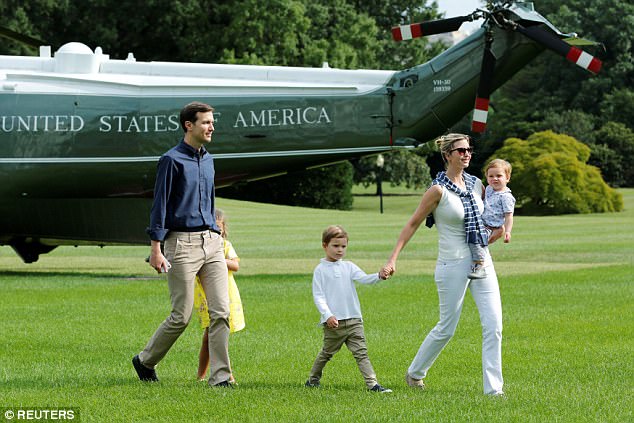 Ivanka walked slightly ahead of her husband and daughter, sporting an all white look with a preppy striped cardigan hanging around her shoulders while she carried her son on her hip 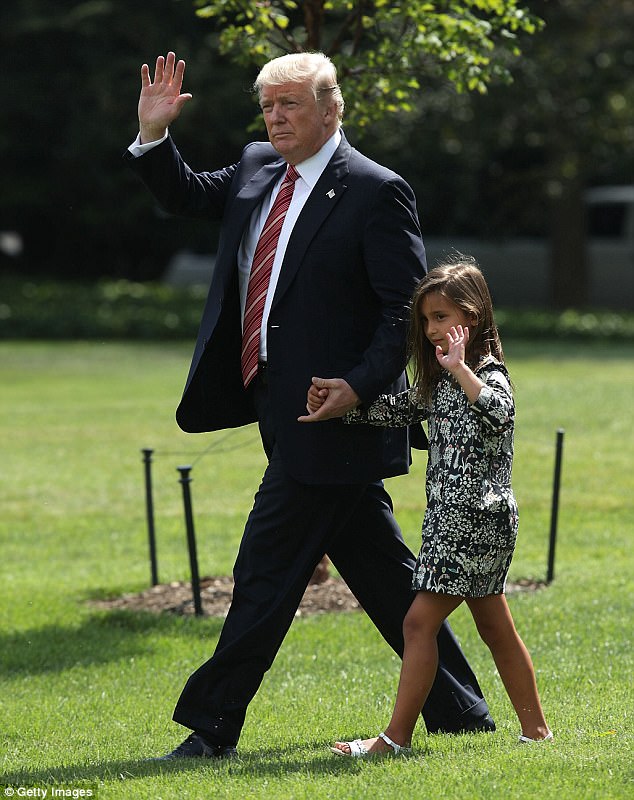 President Trump, Melania, Barron and Ivanka and her family all boarded Marine One on Friday for the quick getaway.

Trump was holding both Arabella and Joseph’s hands as he, Melania, and Barron stepped out of the Oval Office, but he and his granddaughter eventually took off by themselves ahead of the group.

While Trump was with Arabella and waving with his free hand, Barron walked alongside his nephew Joseph, who is turning four in October.

It was Trump’s third time visiting the naval support facility that functions as a private retreat for sitting presidents .

However, Camp David, the country retreat located near Thurmont, Maryland, is just 45 minutes away from Washington, D.C., and Homeland Security Adviser Tom Bossert told reporters during a televised briefing that ‘it’s not a trip’. 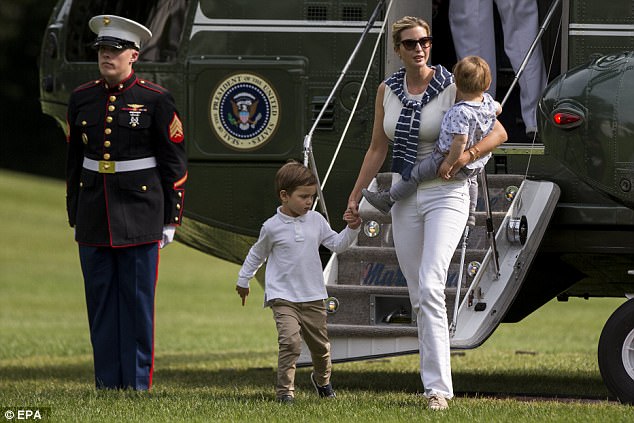 Ivanka had her hands full when she landed, smiling as she carried her one-year-old son Theodore on her hip and held the hand of three-year-old Joseph 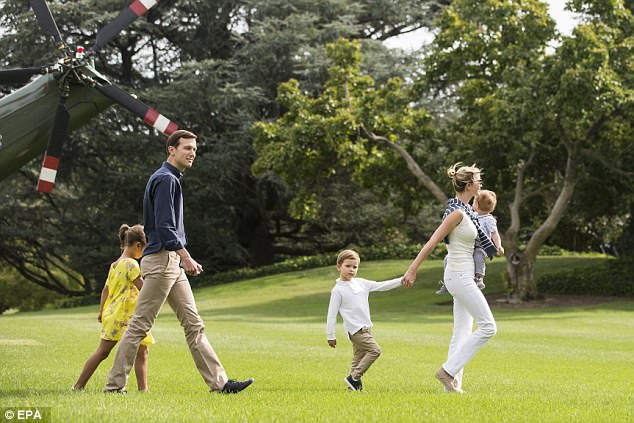 Arabella seemed to go shy after waving to the press pool when she initially left for retreat, as she held onto President Trump’s hand and gave a meek wave on Friday 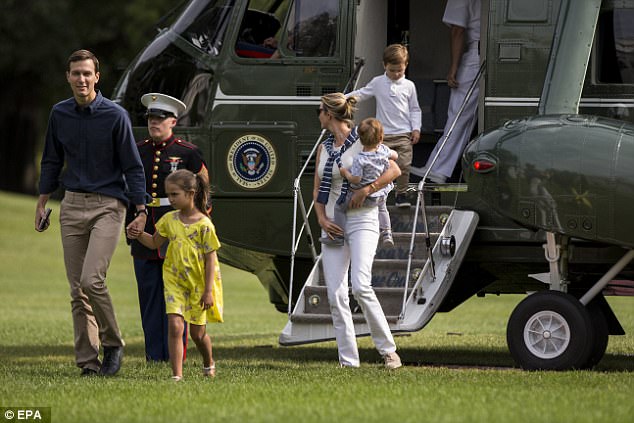 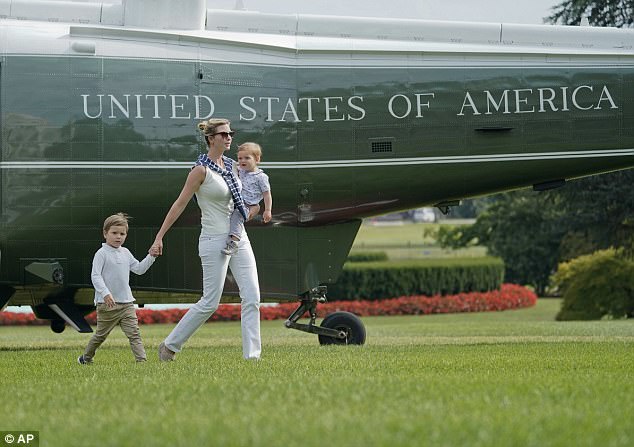 Ivanka Trump, the daughter and assistant to President Donald Trump, walks past Marine One helicopter with her children Joseph and Theodore 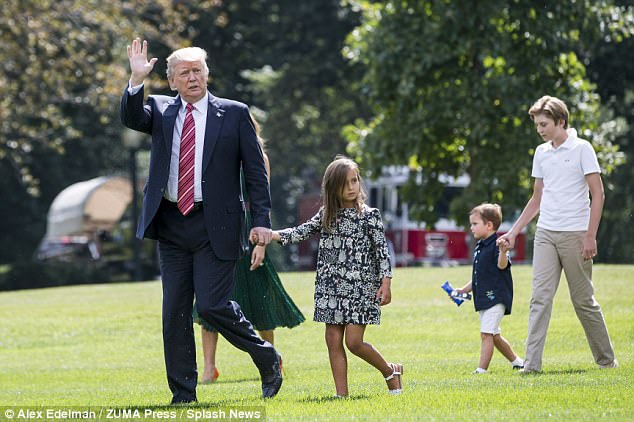 Wave! The whole family put on a show of solidarity as they smiled for the cameras

During his stay at Camp David, Trump kept a close eye on monitoring Hurricane Harvey in Texas, tweeting frequently about Harvey and other issues.

He will visit Texas on Tuesday to survey storm damage caused by Harvey, the first major U.S. natural disaster since he took office in January.

Harvey came ashore late on Friday as the most powerful hurricane to hit Texas in more than 50 years and has killed at least two people. The death toll is expected to rise as the storm lashes the state for days, triggering record floods, tidal surges and tornadoes.

‘The president will travel to Texas on Tuesday,’ White House press secretary Sarah Sanders said in a statement.

‘We are coordinating logistics with state and local officials, and once details are finalized, we will let you know. We continue to keep all of those affected in our thoughts and prayers.’ 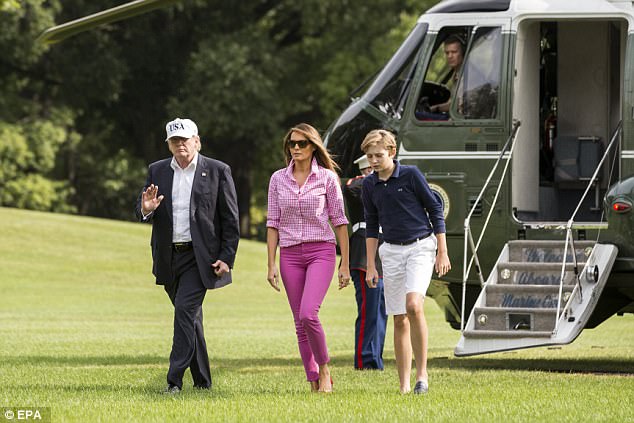 Ivanka and her family disembarked with her father, Melania and 11-year-old Barron on Sunday Trump was wearing a ‘USA’ cap, the same one he was spotted wearing when he was meeting with officials about Hurricane Harvey on Saturday Melania looked chic in an all pink ensemble, with a checkered button-down paired with fuchsia jeans and hot pink flats 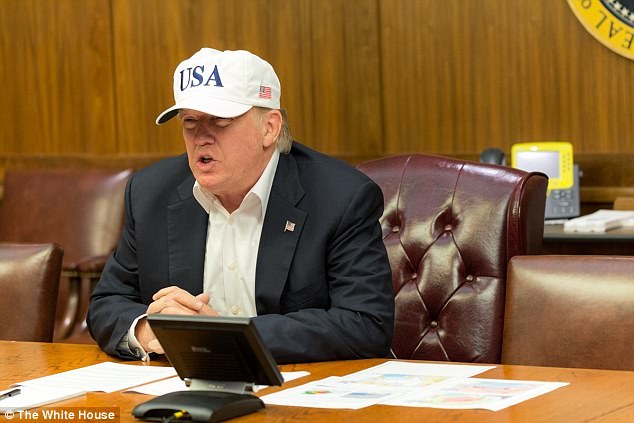 President Trump praised emergency officials for their response to Hurricane Harvey from Camp David on Saturday. The White House said Trump held a video conference with officials about the storm’s  aftermath (pictured)

The widespread flooding caused by Harvey in Texas, including in Houston, the fourth most populous U.S. city, is the first test of how Trump, who never previously held political office, responds to a major storm on his watch.

Since the president travels with a large retinue of Secret Service agents and under a rigorous security protocol, most administrations avoid visiting during the height of natural disasters for fear they will pull resources away from rescue and aid attempts.

During a video conference with his Cabinet on Sunday afternoon, Trump ‘reminded everyone that search and rescue efforts will transition to mass care, restoring power, providing life-sustaining necessities for the population that sheltered in place, and economic recovery,’ according to a White House statement.