Ivanka Trump assistant has to help with her bags

It looks like the weight of her role as a White House advisor is proving to much for Ivanka Trump – at least as far as the paperwork is concerned.

When the first daughter left her home this morning she was seen carrying a small bucket-style handbag on her shoulder, which – although stylish – proved to be no match for all of the items that Ivanka required for a busy day at the office.

Indeed, as the 35-year-old made her way out to her waiting SUV, she had to have an assistant follow her with a much larger tote, which appeared to be stuffed to the brim with various sheets of paper, and even a newspaper, as well as a coffee from Starbucks.

Chic show: Ivanka Trump stepped out of her home on Thursday wearing a form-fitting black shirt with a faux choker detail, and flowing black trousers 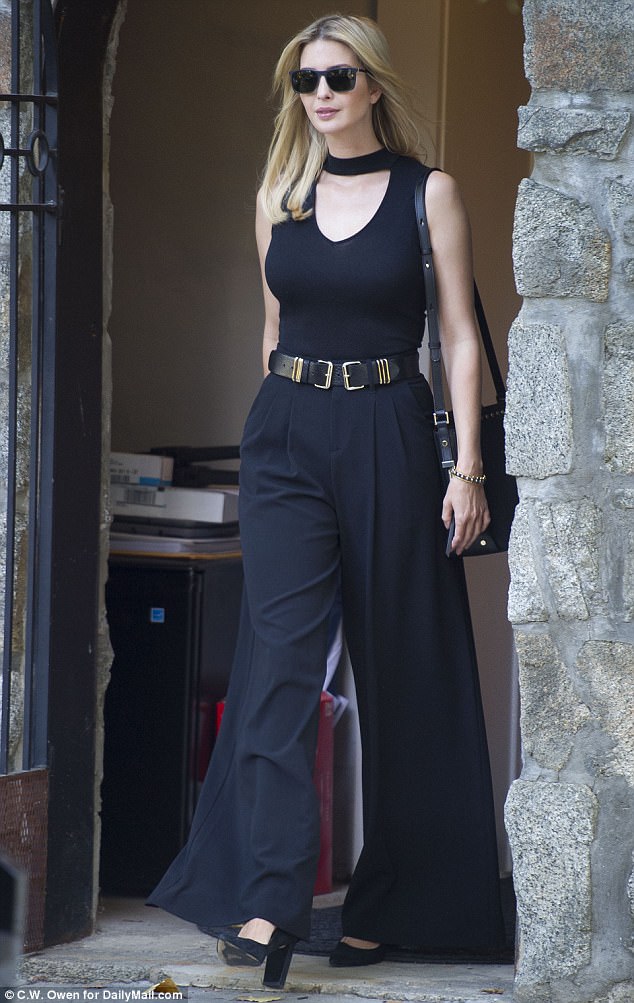 Black and gold! The 35-year-old accessorized with a double buckle belt and a matching studded bucket-style bag from her eponymous fashion line

Strutting her stuff: Ivanka finished off her look with a pair of black high heels, also from her own brand, and a pair of dark sunglasses

Ever the faithful brand ambassador, Ivanka made sure that both purses were from her eponymous fashion line, with the mother-of-three modeling the $258 Claudia Bucket Bag, while her assistant was weighed down with the much larger $298 Soho Shopper.

Taking advantage of the unseasonably warm September weather, the businesswoman left her arms bare, wearing a low-cut, figure-hugging black shirt which had a fun faux choker detail at the neck.

On her bottom half, she balanced out the skin-tight top with a pair of flowing black trousers, which were nipped in at the waist with a black-and-gold double buckle belt.

Adding the final touch – and the final nod to her own fashion brand – Ivanka wore a pair of chic black block heels, before accessorizing with a pair of dark sunglasses and some gold bracelets.

Her assistant, meanwhile, looked much more casual as she made her way out of the sprawling property’s side gate, wearing a grey T-shirt and a pair of black sports shorts, showing off a red manicure as she carried Ivanka’s second bag, and a Starbucks coffee, to the waiting vehicle.

Clearly eager to help out as much as possible, she was also seen passing bottled water to Ivanka’s waiting Secret Service agents. 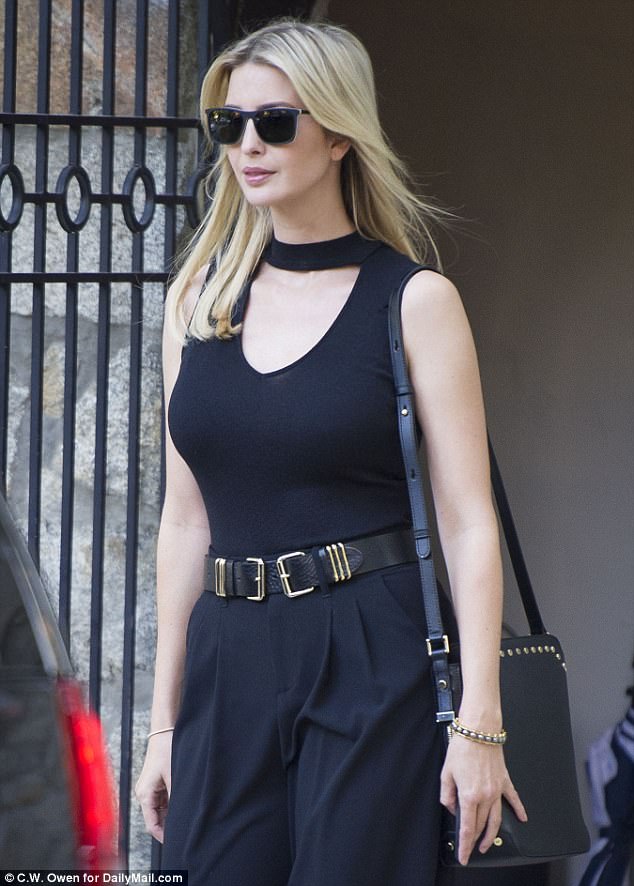 Blonde bombshell: The first daughter’s hair was styled straight, and left to hang loose around her shoulders 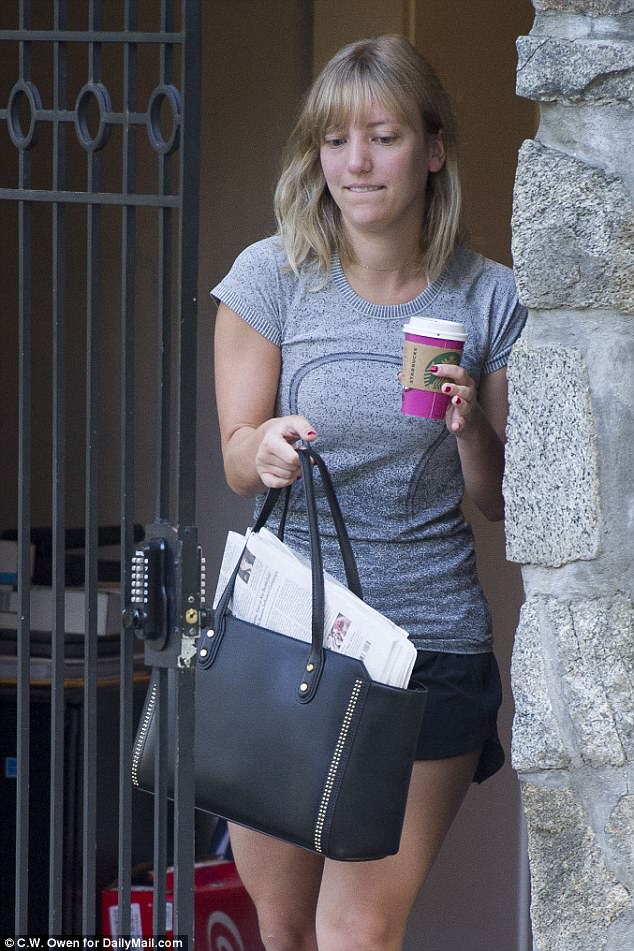 Helping hand! Ivanka’s assistant was seen carrying a much larger black tote stuffed with papers to the waiting SUV, along with a Starbucks coffee 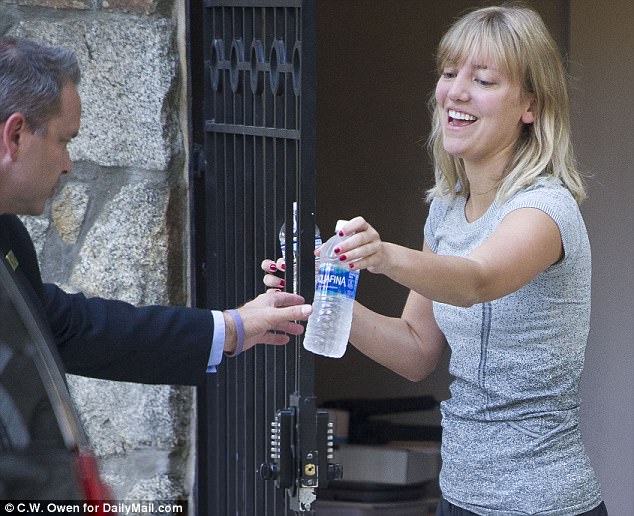 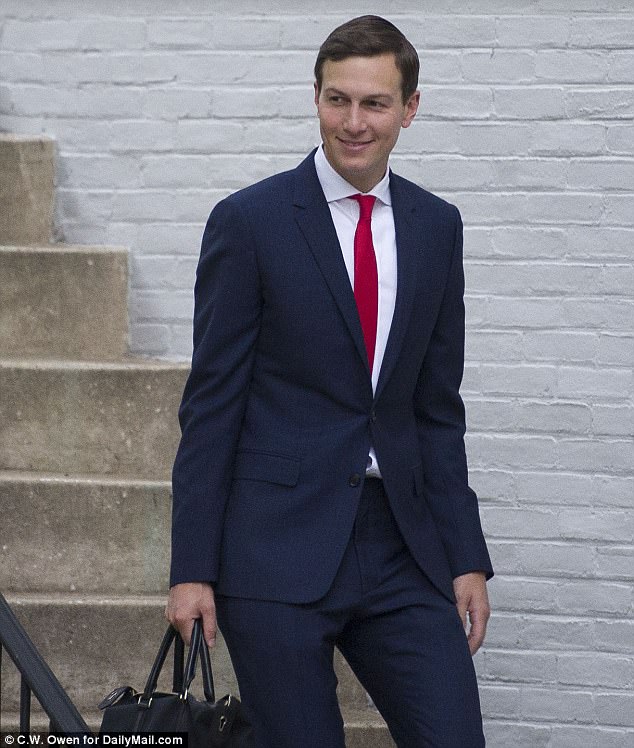 No worries: Jared Kushner, 36, left the home shortly before his wife, less than 24 hours after it was revealed he accidentally registered to vote as a woman

She was seen leaving her home shortly after her husband Jared Kushner, 36, made his way to the White House for the day – less than 24 hours after it was revealed that he actually registered to vote as a woman back in 2009, having apparently ticked the wrong box on his form.

Despite the embarrassing mix-up, Jared appeared fairly laid-back as he made his way out of his home, carrying just a single bag, and without the help of an assistant.

It is possible that the first daughter’s bulging tote was full of paperwork regarding her recent campaign to increase STEM (science, technology, engineering, and mathematics) education in schools – an aim which received a serious boost on Monday when the White House greenlit $200 million in grants to go toward such programs.

Internet companies then pledged an additional $300 million the following day.

And Ivanka wasted no time in spreading awareness about the program, traveling on a solo trip to Detroit on Tuesday to appear on a panel discussing the importance of STEM education in schools, particularly among young girls.

Far from having an assistant on-hand to help her with her bags, Ivanka got a small taste of life as a normal member of the public during the trip, when she hopped on a commercial flight in order to return to Washington, D.C. 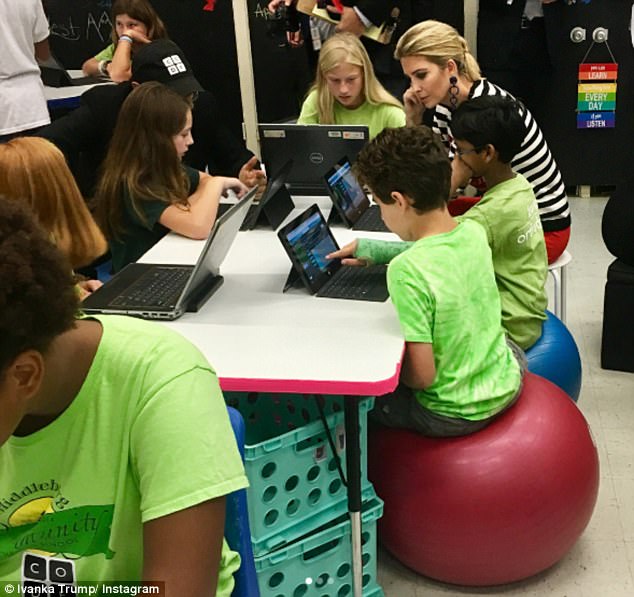 Spreading the message: Ivanka joined Brad Smith, the President of Microsoft, for a morning of coding on Wednesday, in order to promote STEM education in schools 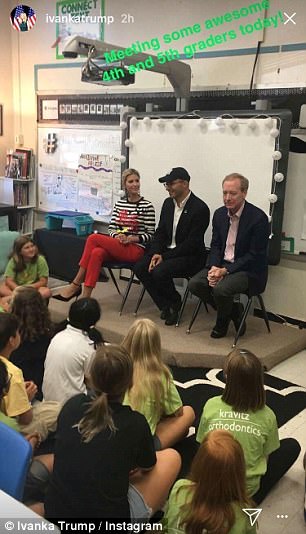 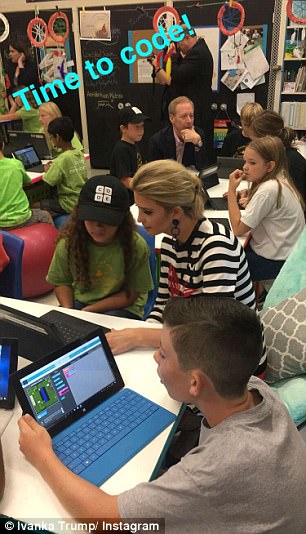 Key message: She noted that computer science education is hugely important for ‘the future of our workforce’

Of course, the President Donald Trump’s daughter didn’t have quite the same experience as the average traveler, and was escorted on her flight, and subsequent walk through the airport, by a group of burly Secret Service agents while being snapped by photographers.

Ivanka looked incredibly chic as she made her way out of the airport, wearing a bright orange-red shirt and a blue-and-red pinstripe skirt, however she had changed out of the gold high heels she was seen wearing earlier in the day in favor of some comfy flats.

Following in the footsteps of almost every high profile person who has been photographed on their way out of an airport, Ivanka accessorized her look with a pair of dark sunglasses.

She also added some funky navy earrings to complete the look.

The strappy metallic heels that she had worn earlier in the day, during her panel appearance, were nowhere to be seen, suggesting Ivanka may have had an aide on hand to help her with any additional wardrobe items.

Ivanka’s trip on the commercial flight is thought to be her first official trip not made on Air Force One or a chartered private plane – and comes after Health and Human Services Secretary Tom Price sparked outrage over his private jet spending spree.

Price came under fire last week for using charter jets for government trips on three consecutive days, including a round trip between Washington, D.C. and Philadelphia – a distance of just 137 miles – that cost taxpayers $25,000. 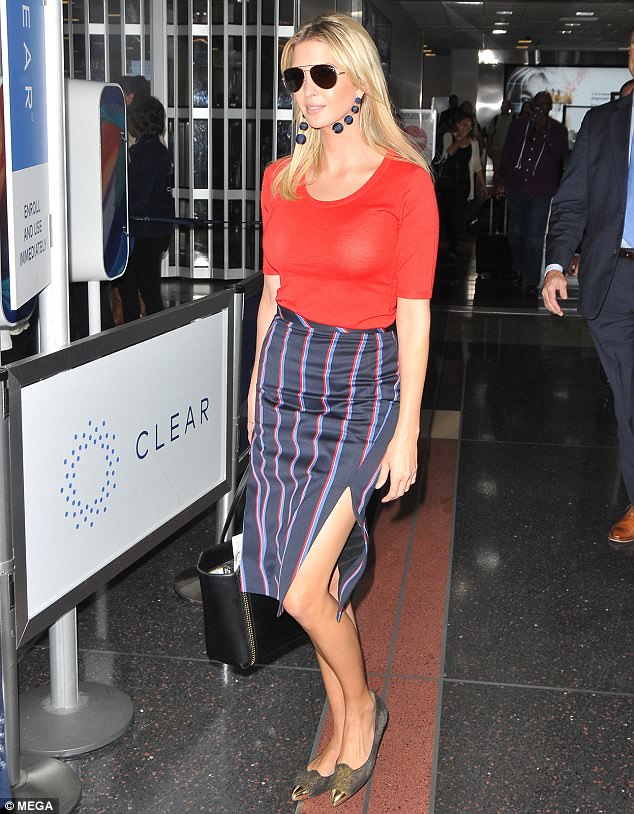 One of us! Ivanka was seen at Reagan National Airport on Tuesday evening after flying commercial to return from Detroit 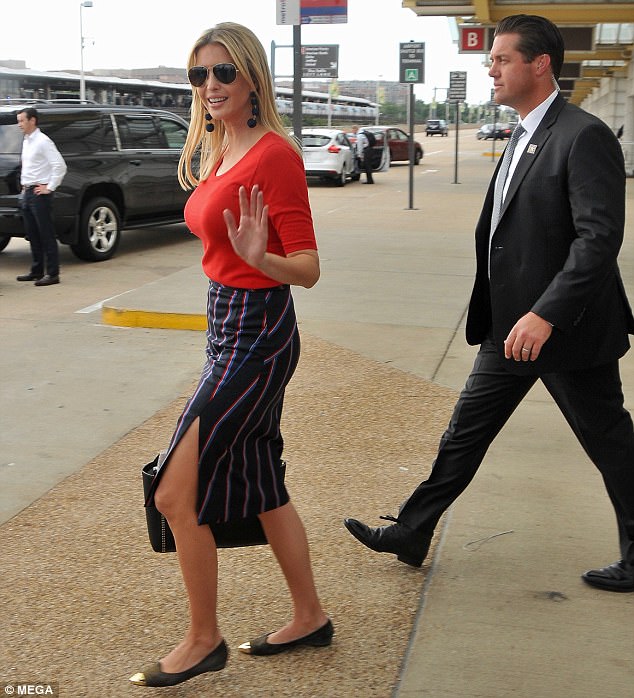 VIP: First daughter Ivanka, who was escorted through the airport by a group of Secret Service agents, wore a pair of comfy flats to make the trip, removing the heels she donned earlier 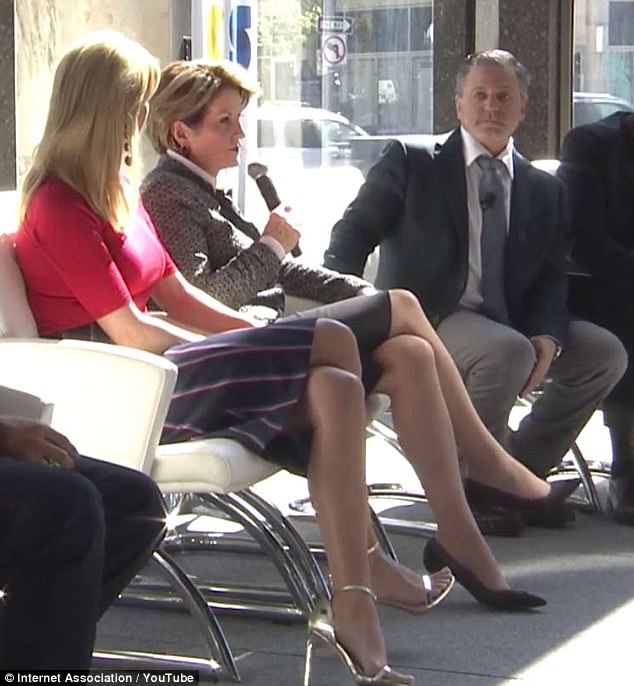 Making a statement: Ivanka visited Detroit to talk about a new public and private commitment to get coding taught in public schools

The businesswoman, who has sparked a controversy of her own this week for using private email at the White House, was no doubt very keen to avoid causing similar public fury.

Ivanka made the solo trip to Detroit to talk abut new public and private investments into teaching more American kids to code, having been at her father’s side on Monday when he greenlit $200 million in grants to go toward STEM (science, technology, engineering and mathematics) programs.

Speaking as part of a panel, Ivanka noted that the goal of having computer science classes taught at every public school in five years was ‘incredibly doable’ and she wanted to ‘create excitement and enthusiasm’ for the subject as well, especially among minorities and young girls.

‘I do think we live in a time where we’re all so inspired by entrepreneurship and innovation … and so I think that coding can be aspirational, it should be aspirational, it should be exciting, we need to make it exactly that for our students,’ she said during the discussion, which was organized by the Internet Association, a group that represents a majority of brand-name internet companies.

As for the initiative, on Monday the White House announced a $200 million commitment for Department of Education grants to go toward funding STEM and computer science education in K-12 schools.

That sum was more than matched by internet and tech companies on Tuesday, with $300 million in private funds allocated to be spent on educational endeavors. 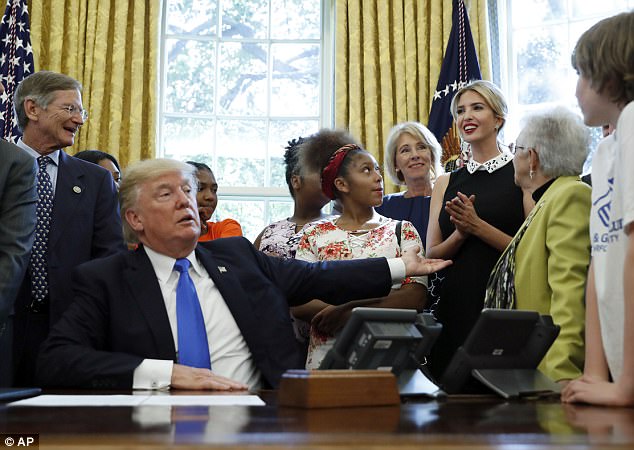 Goal: On Monday, Ivanka watched on as President Trump signed an order to give $200 million in Department of Education grants to the cause of increasing access to STEM course work 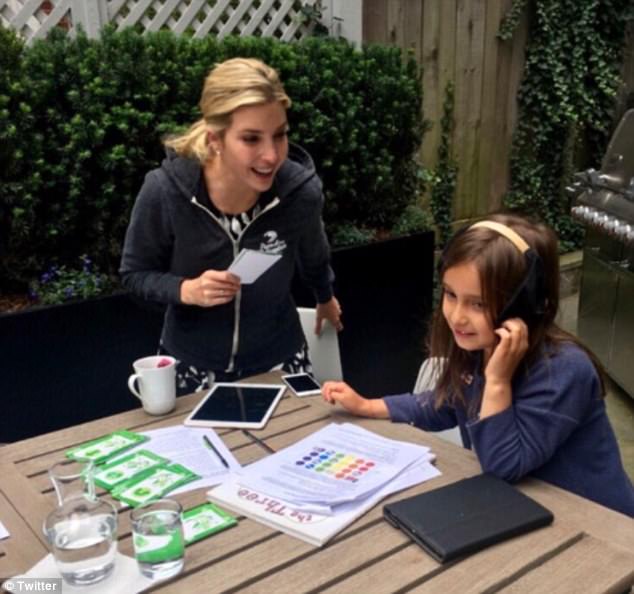 Learning: The mother-of-three has been teaching her six-year-old daughter Arabella to code at home, sharing this image of the duo working hard over the summer

Google, Amazon, Facebook, Microsoft and Salesforce committed $50 million each, while Lockheed Martin pledged $25 million for the effort and Accenture, General Motors and Pluralsight each giving $10 million, according to the White House pool report.

Since taking a role in her father’s White House, Ivanka Trump has spoken about matching curriculum with plausible job opportunities and she continued that theme today.

But she also advised that kids needed to not just be coding for their future career’s sake – explaining that the skill set could be fun to learn and should inspire passion too.

‘I think just generally when you’re young that is the point in time where you should, with wild abandon, really see what it is that you enjoy doing,’ she said.

She suggested kids should try a lot of things, though also pointed out that the opportunity for learning computer science should be there.

‘Because one of the lessons that I grew up with and I found to be true my whole life, the people who really achieve great things, the people who are successful in the context of their company or business leaders running a company, they are all deeply passionate and love what they do,’ Ivanka said.