Ivanka Trump jetted off to North Carolina to hand out food to ‘families in need’ – days after she returned from a lavish trip to the Middle East, which saw her riding on camels and watching the World Cup with her husband, Jared, and their three young kids. Ivanka, 41, spent her Giving Tuesday distributing ‘beautifully, locally sourced fresh and nutritious produce’ through Ripe Revival, a non-profit organization dedicated to ‘reviving communities through food.’ 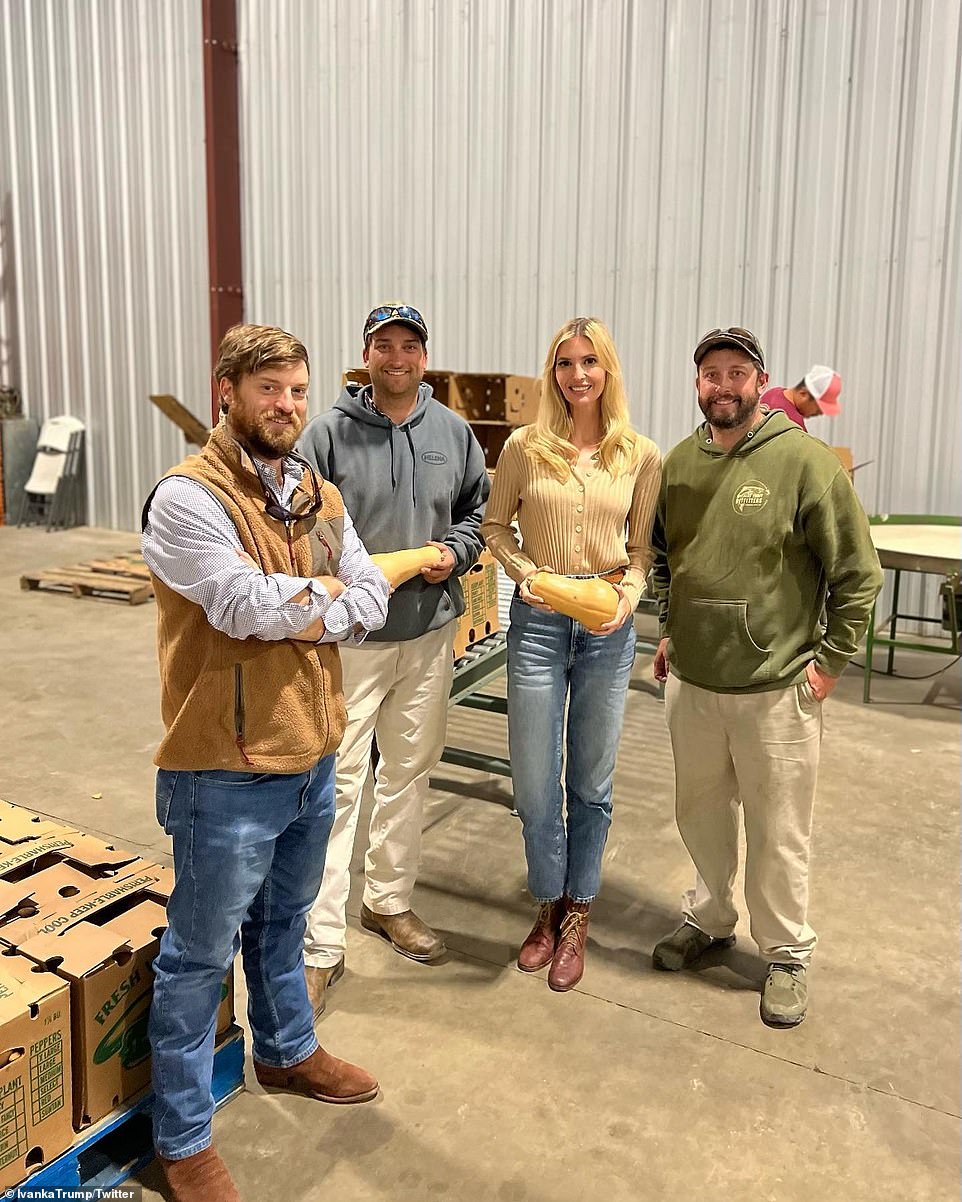 The mother-of-three began her day by visiting a ‘seventh-generation’ farm, where she helped load up one of Ripe Revival’s buses full of food, before she headed to a school in Littleton. At the institution, she passed out vouchers to shop at Revival’s ‘mobile market’ to ‘students and their families.’ Ivanka shared snippets of her day to her Instagram Stories and feed, while gushing over the ‘wonderful organization’ and praising its ability to ‘foster connectivity between America’s small farms and hungry families.’ 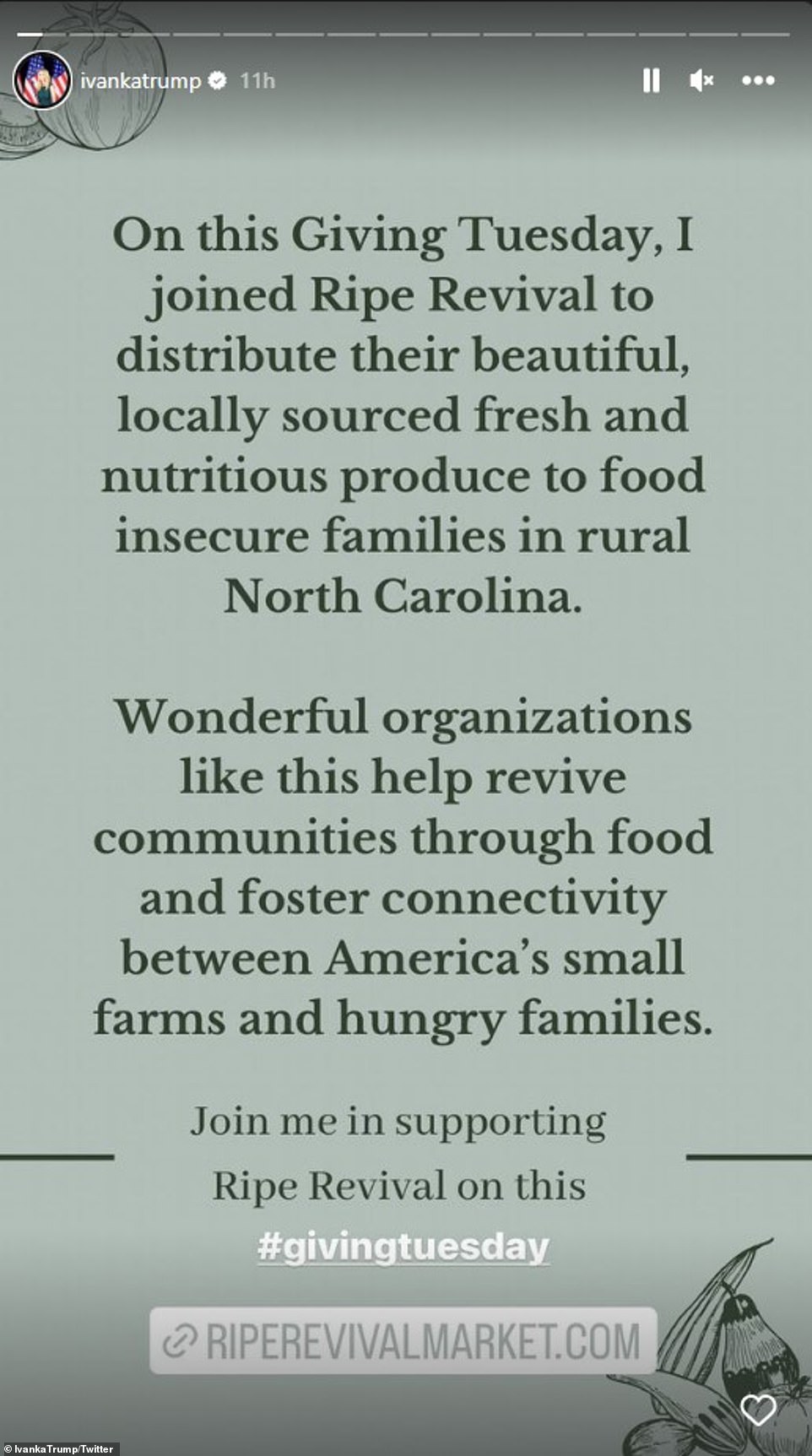 ‘On this Giving Tuesday, I joined @riperevival to distribute their beautiful, locally sourced fresh and nutritious produce to families in need in rural North Carolina,’ she captioned a carousel of photos from the trip. Wonderful organizations like this help revive communities through food and foster connectivity between America’s small farms and hungry families.’ 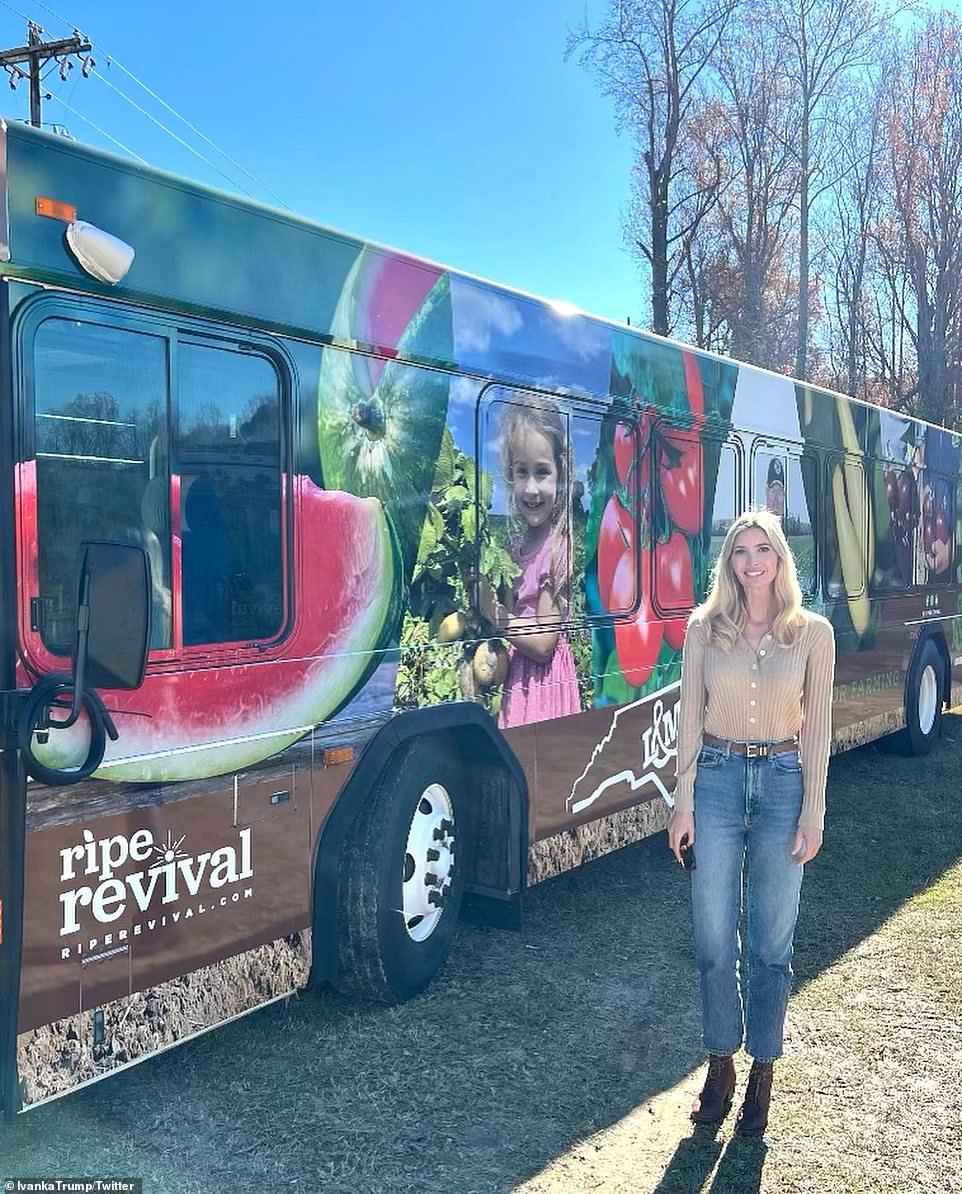 The 41-year-old also shared some statistics to her Instagram Stories, writing, ‘One in eight families face food insecurity. 40 percent of farmers crops are lost or left in the field each year due to odd shapes, colors, sized, or other cosmetic features found in produce that is perfectly healthy and nutritional otherwise,’ she added. ‘Ripe Revival works with family farms to turn their excess produce into fun, innovative and healthier options that meet the needs of consumers while donating pound to pound back to families most in need. 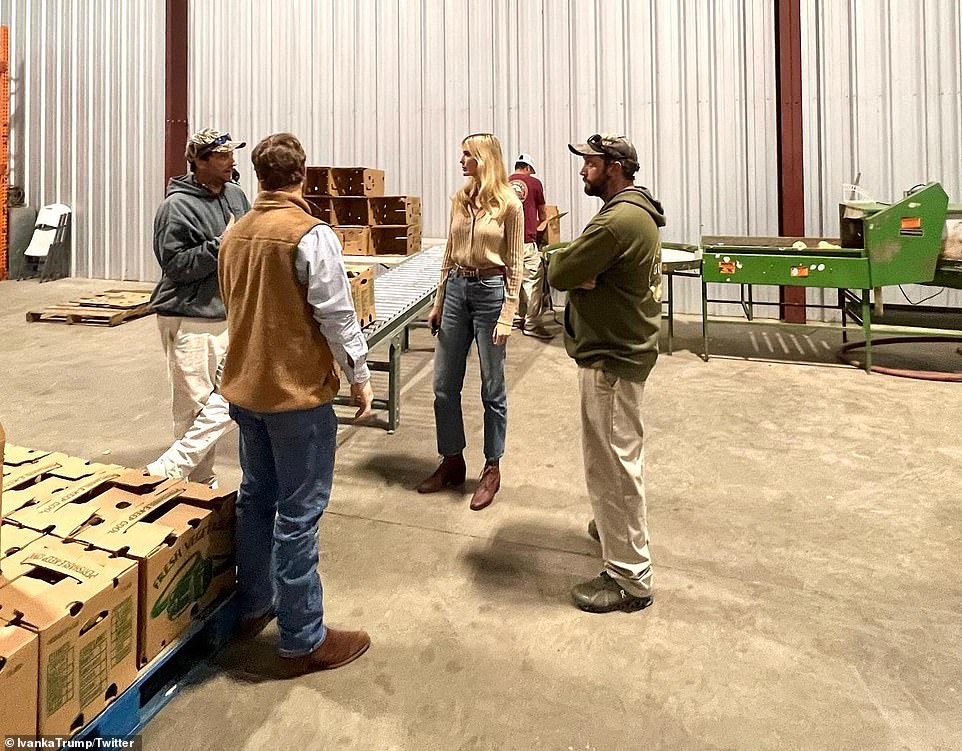 The daughter of former President Donald Trump also shared a link to Ripe Revival’s website, and urged others to ‘join her in supporting families this holiday season.’ One of the pictures showed Ivanka checking out the produce, while another featured her posing in front of Ripe Revival’s bus. 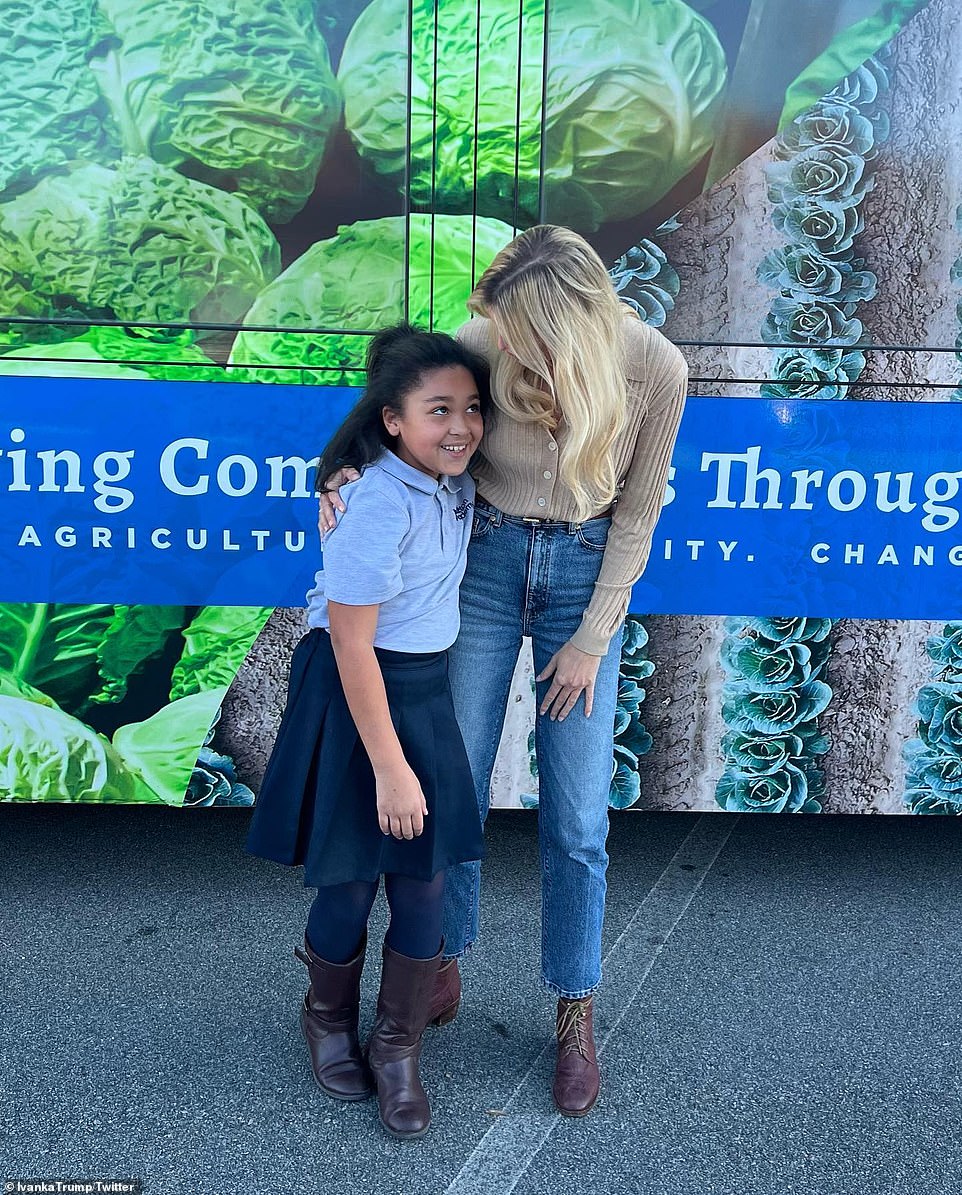 Others saw the former White House advisor chatting with local farmers and Ripe Revival team members. One touching shot featured Ivanka standing with a young student, which she captioned, ‘Met this sweet girl today,’ with a heart. 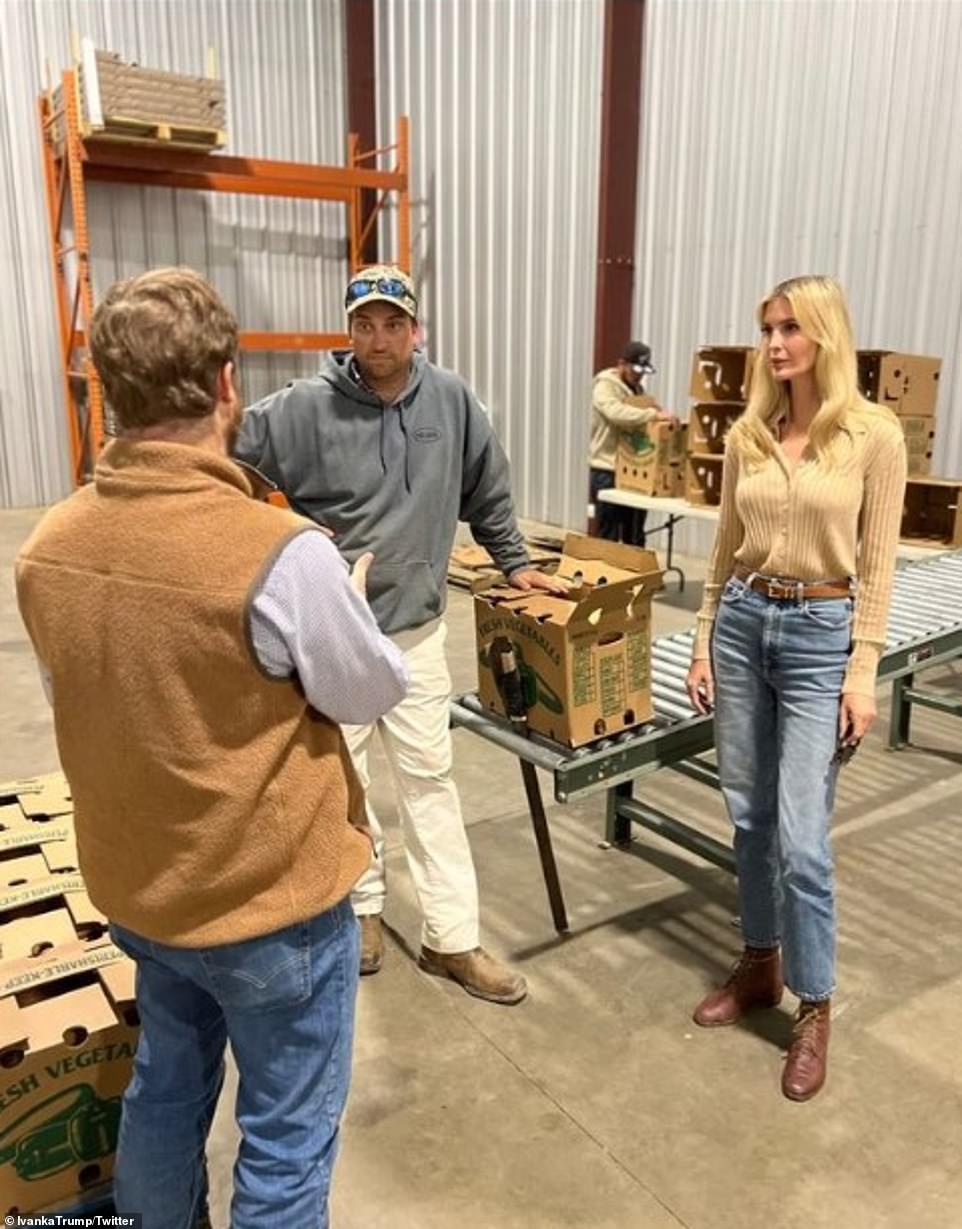 She dressed casually in a pair of blue jeans and a chic, brown, button-down knitted blouse, which she tucked into the denim pants. She completed the look with a brown belt and heeled, lace-up combat boots. The former White House advisor has joined food programs several times in the past – and even established her own Farmers to Families Food Box program while her father was in the White House. 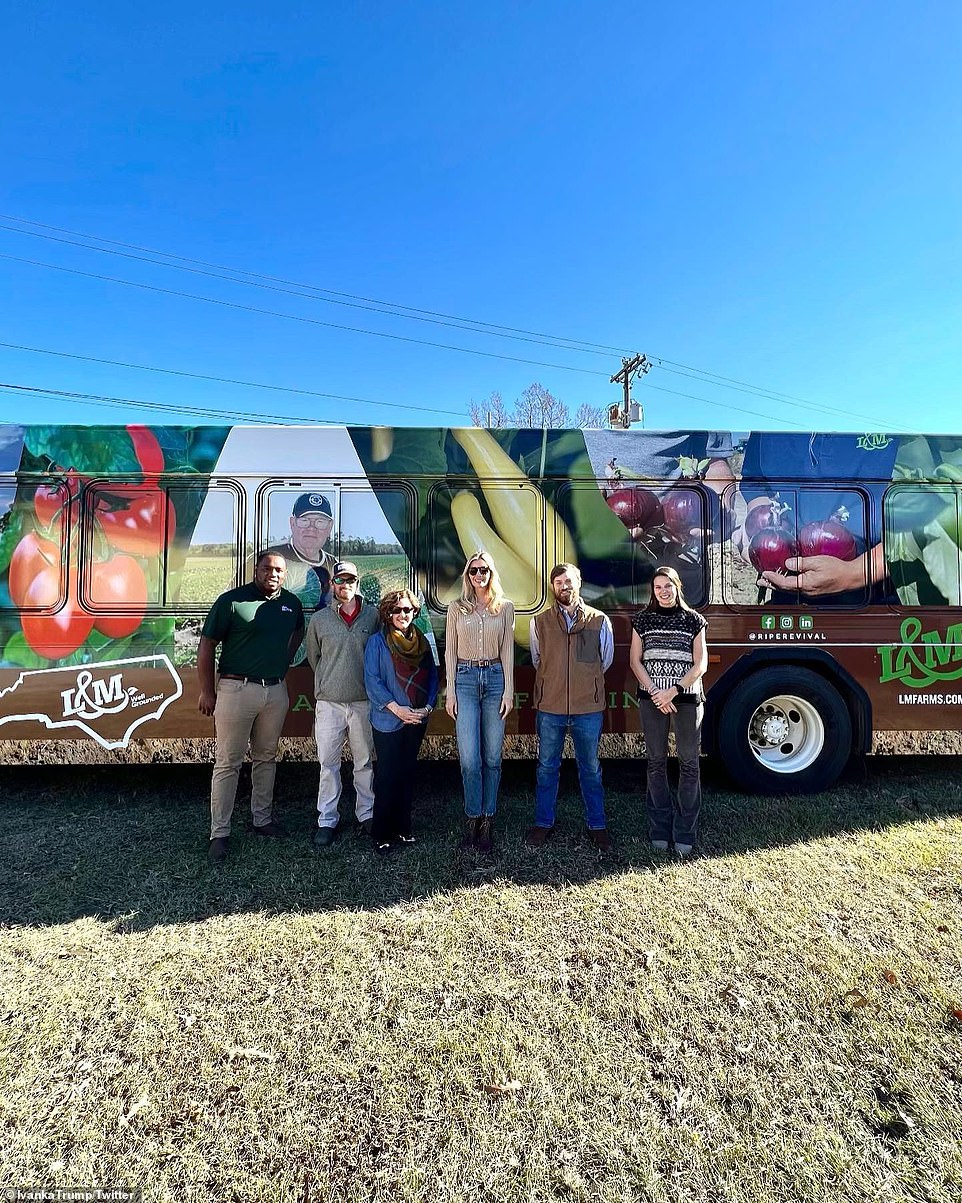 Ripe Revival works with local companies in order to create paid-for boxes filled with food – and for every box it delivers, it vows to ‘donate back foods to those in need.’ Its mission is to ‘mend a broken food system, through practical and creative solutions that reconnect farmers, businesses, non-profits, and communities.’ ‘We envision a world where farmers thrive, businesses flourish, and communities are fully connected as the solution,’ its website reads. 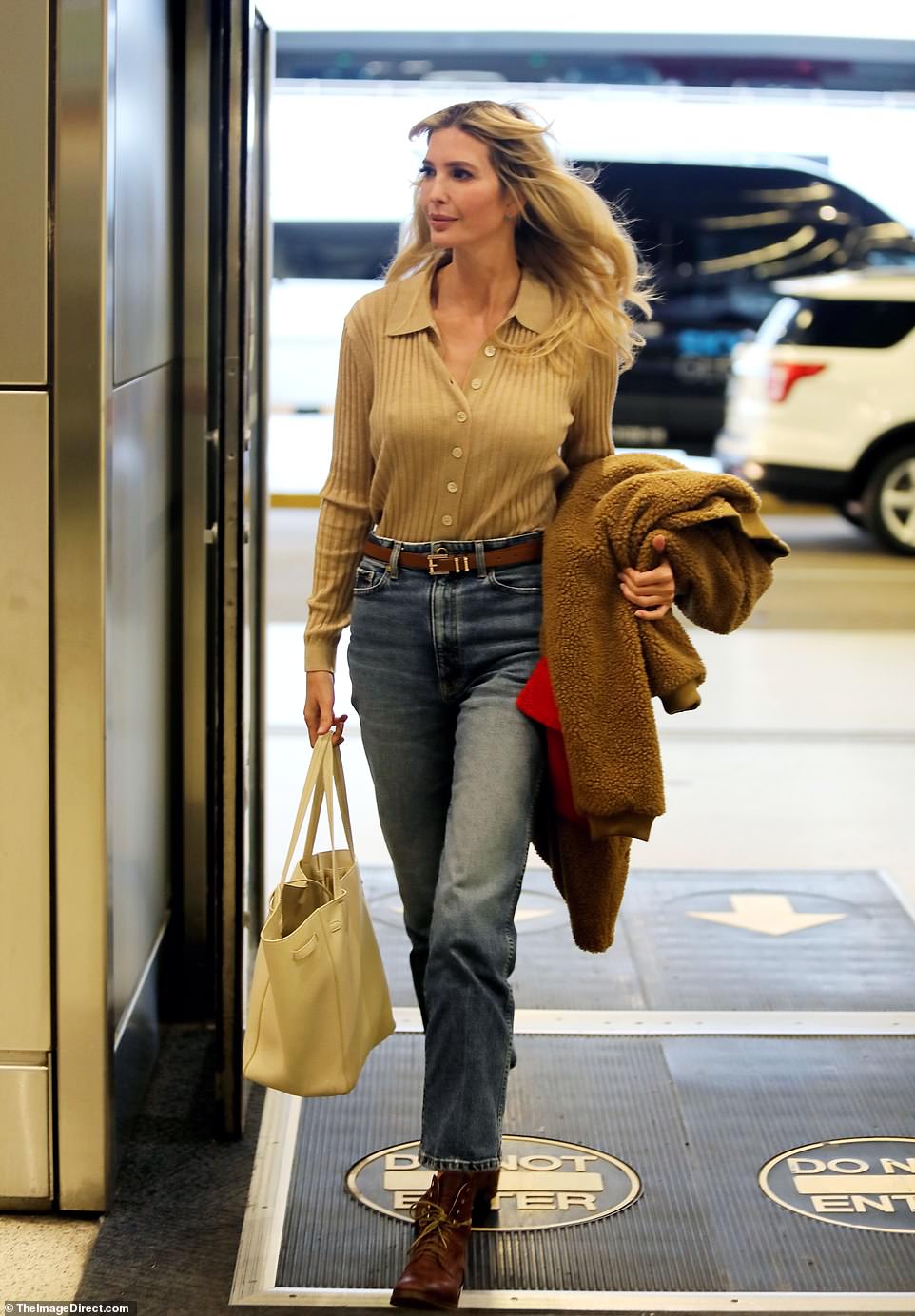 Earlier on in the day, Ivanka was was photographed arriving at Miami International Airport. The businesswoman was prepped for cold weather, carrying a warm-looking fuzzy brown jacket in her arm as she made her way into the terminal to catch her flight to North Carolina. Ivanka accessorized the outfit with a fashionable white handbag and bright green hoop earrings. She left her long, blonde locks in loose waves around her face. 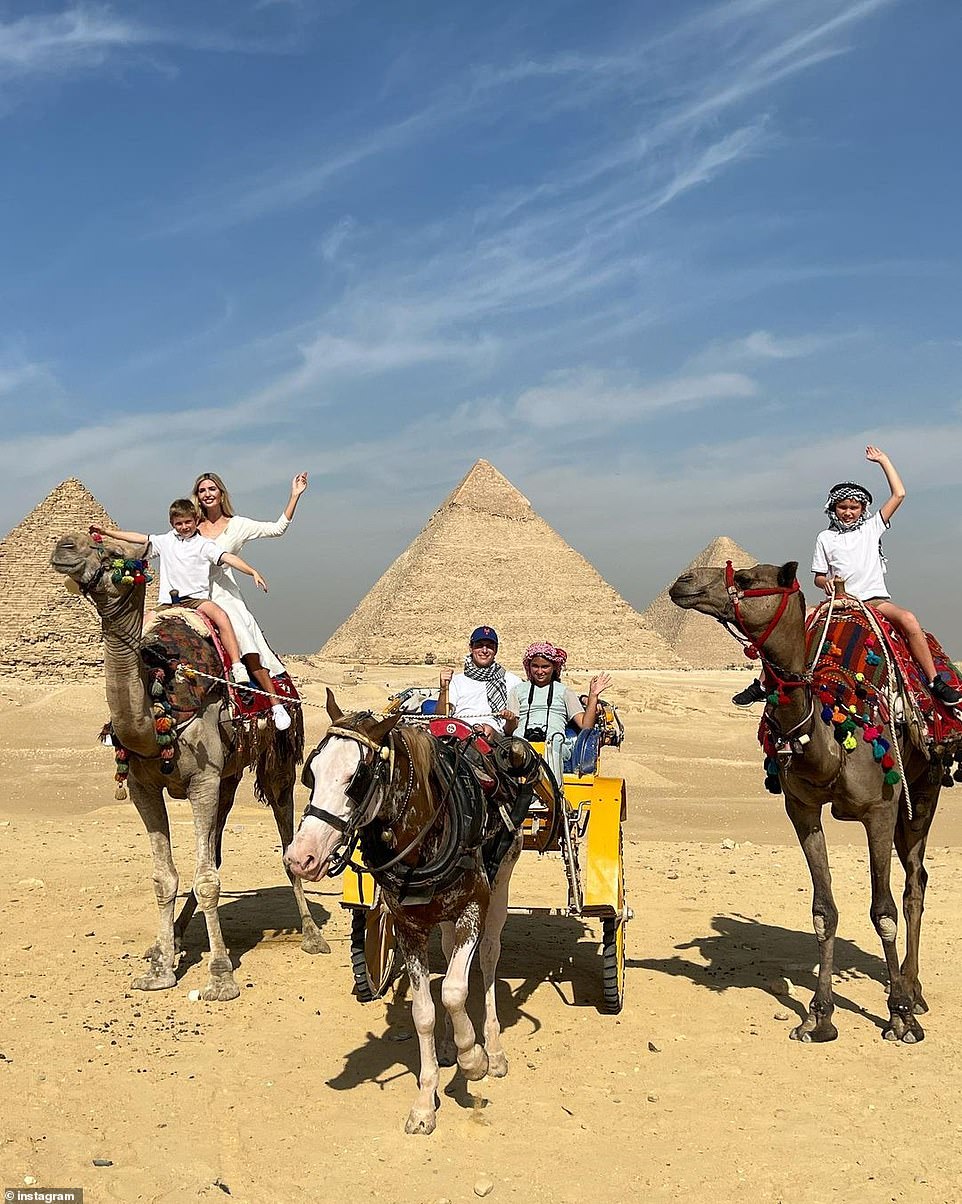 The blonde beauty’s trip to North Carolina comes just days after she arrived back home from a family trip to the Middle East. The vacation began in Egypt, where she, Jared, 41, and their kids – Arabella, 11, Joseph, nine, and Theodore, six – rode camels and toured the pyramids , including the Great Sphinx of Giza. 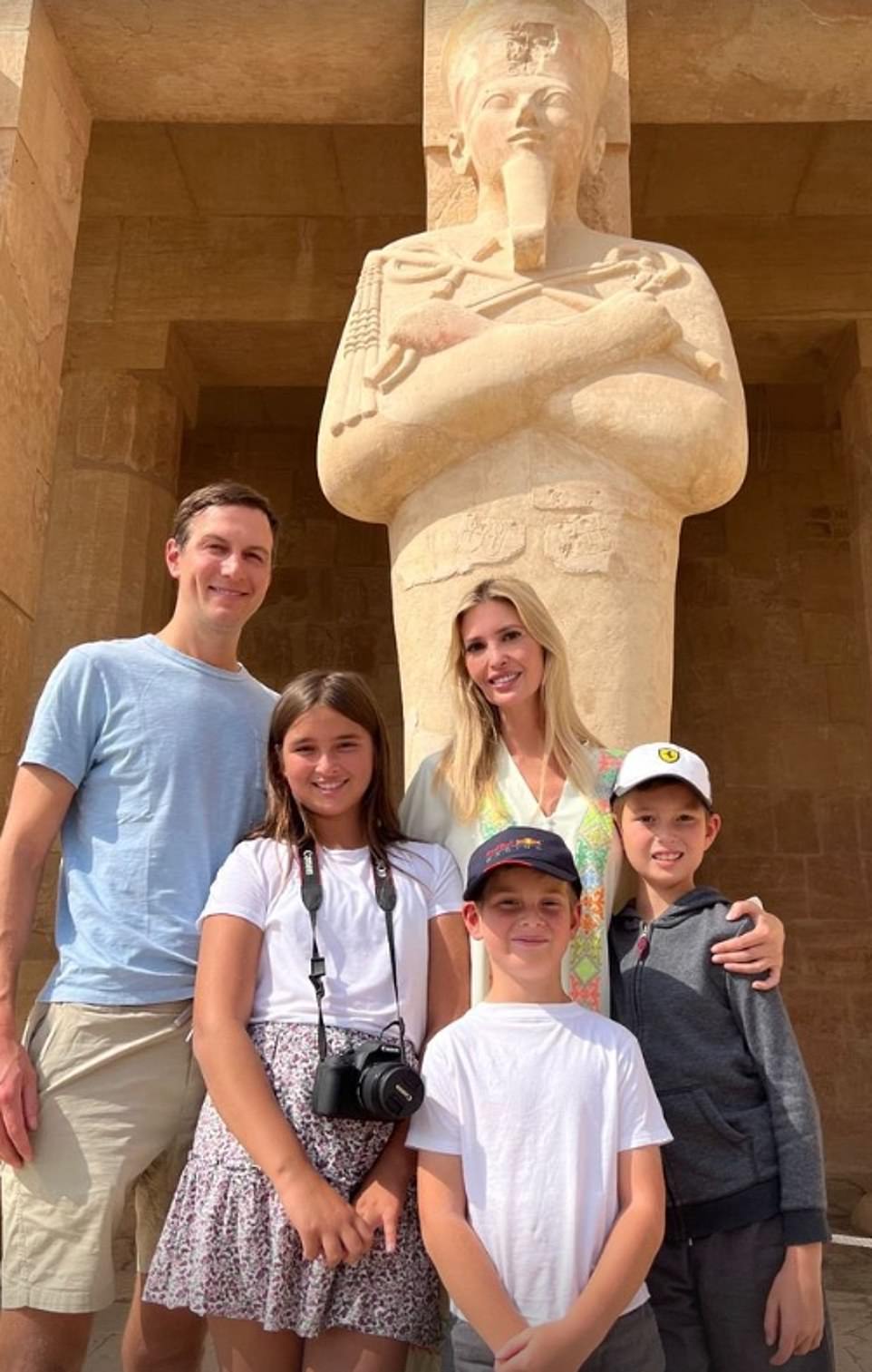 Before taking a tour of the Luxor Temple, which is situated on the east bank of the River Nile, the family posed in front of an ancient statue of the god Amun by the entrance. ‘Exploring the wonders of Luxor, one of the oldest inhabited cities in the world,’ Ivanka captioned the snap on Instagram. After completing the tour, the family soaked in the culture outside the temple, and Ivanka was pictured jumping for joy with her youngest son, Theodore, along the avenue of Sphinxes. The family also enjoyed some quality time together on a private boat trip. ‘A day at the Pyramids! So special to explore the beauty of Egypt for the first time with my family,’ she wrote alongside some more images from the day. 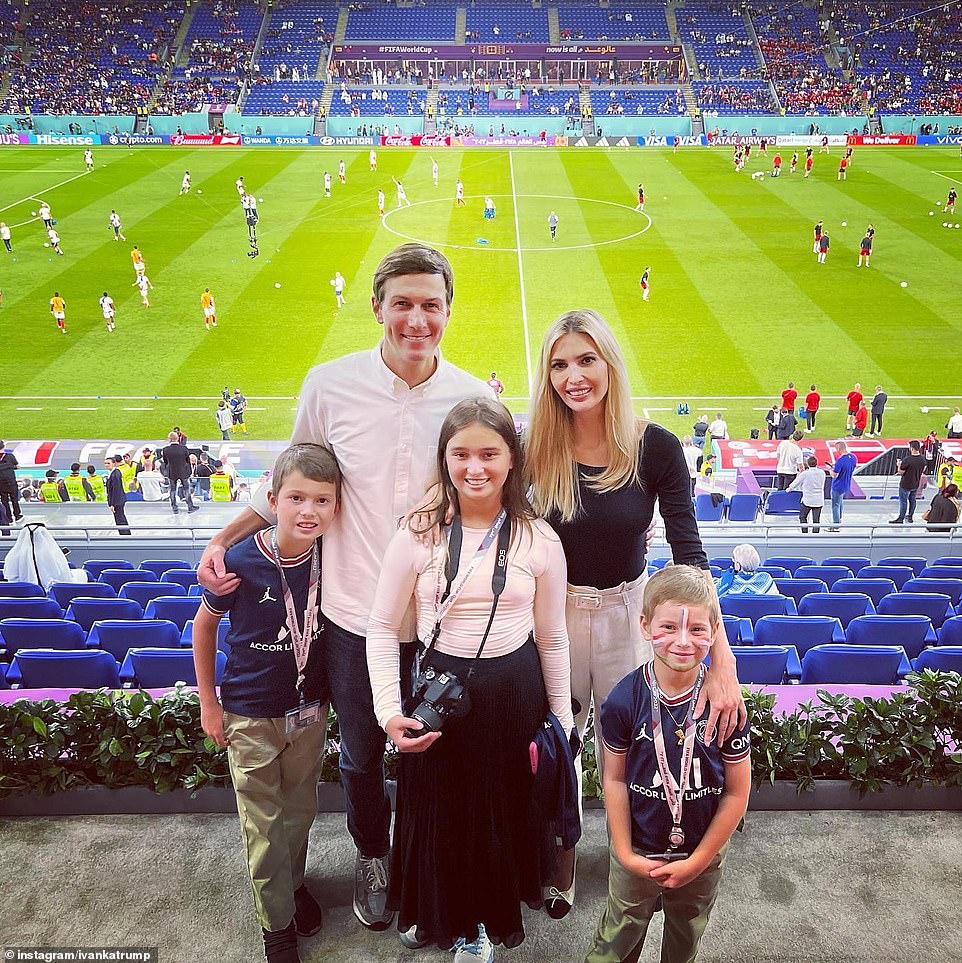 The family then headed to Qatar to watch the World Cup , and they spent their Thanksgiving in the stands – attending a total of four matches together. They were first spotted at Brazil’s opening match versus Serbia on Thursday, which the former won 2-0. They then cheered on Cristiano Ronaldo as his Portuguese side beat Ghana 3-2. On Friday, they watched the U.S.’s 0-0 stalemate with Group B rival England, and the next day they witnessed France’s thrilling 2-1 victory over Denmark. 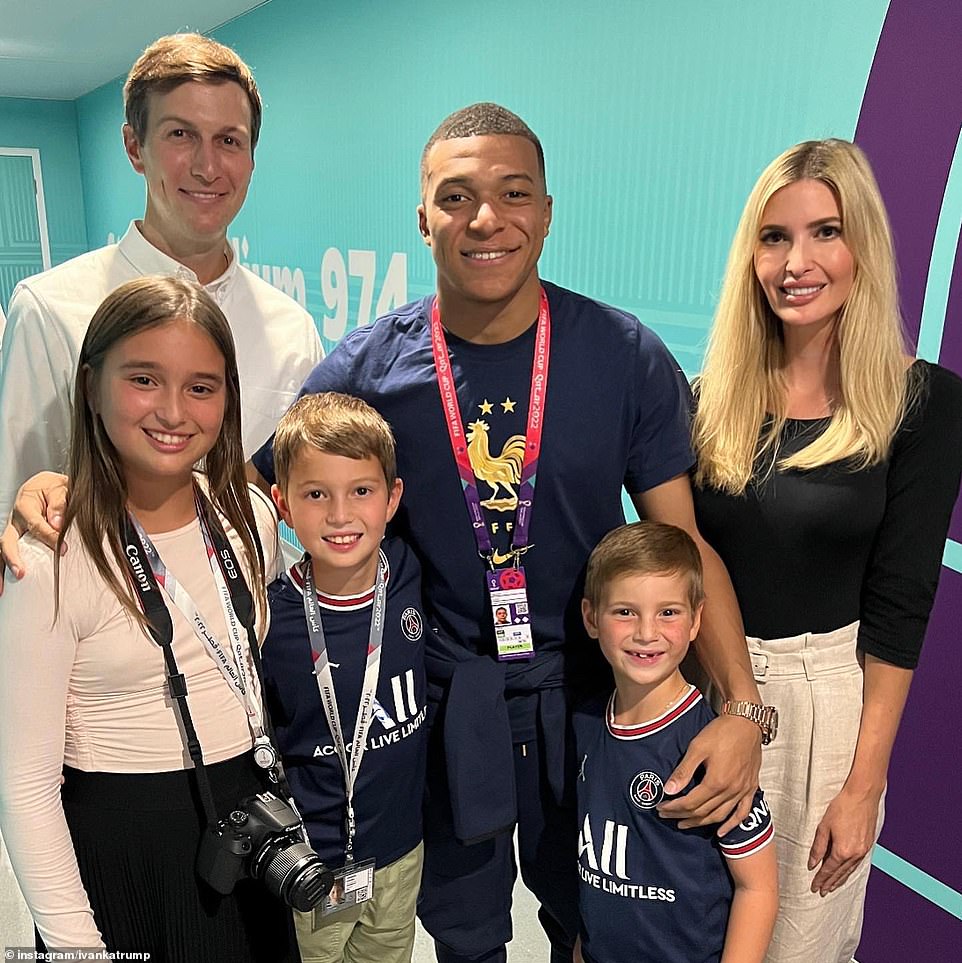 After the game, they met French national team star Kylian Mbappe (pictured), who signed autographs and posed for pictures with them. Ivanka shared snapshots of the moment on Instagram, writing, ‘An honor to congratulate @k.mbappe on France’s incredible win tonight! Kylian is as kind as he is talented!’ In a follow-up post featuring more photos of her family in Qatar, she added, ‘Three days, four matches, a ton of laughs, and countless family memories made at the World Cup.’ 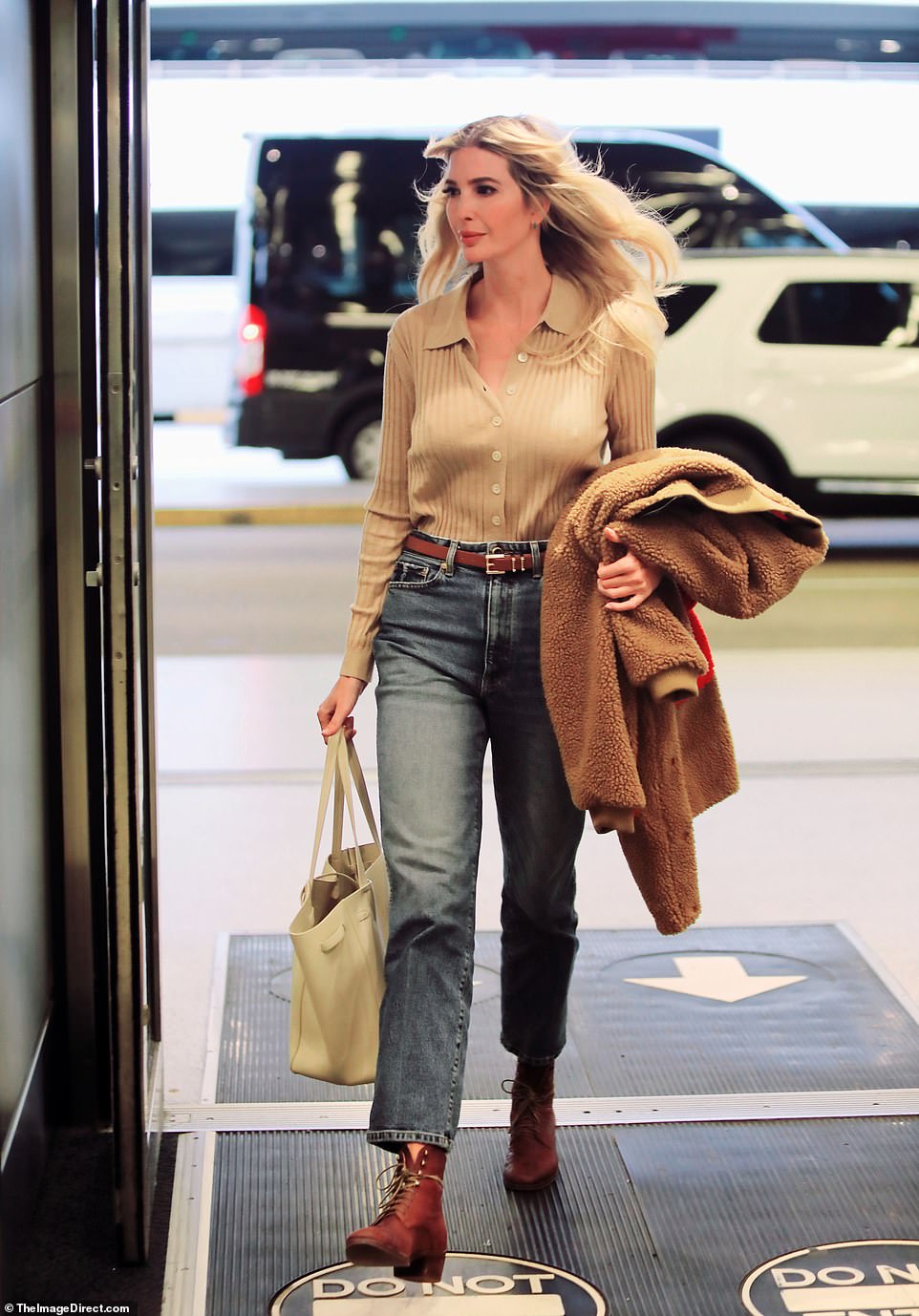 It’s unclear when exactly the family arrived back in the states, but Ivanka was spotted visiting a gym in Miami on Monday, one day before she left again. Earlier this month, Ivanka – who served as a White House advisor during Donald’s presidency – announced that she is done with politics and will be prioritizing her private life instead of joining her father’s presidential campaign. ‘I love my father very much. This time around, I’m choosing to prioritize my young children and the private life we are creating as a family,’ the she said. ‘While I will always love and support my father, going forward I will do so outside the political arena.’ 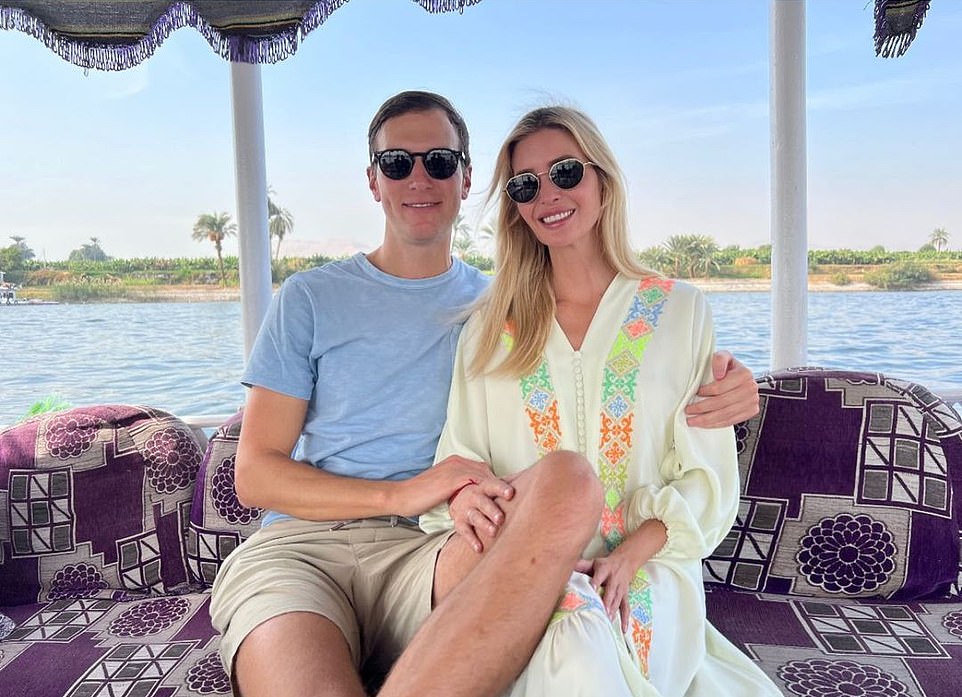 Ivanka and her husband, Jared, who was also one of Donald’s advisors, moved to Florida after they left their posts at the White House in early 2021, and they quickly began laying down new roots. Last year, they scooped up a $24 million waterfront mansion that sits on 1.3 acres of Indian Creek – an exclusive island that is known as the ‘Billionaire Bunker’ – which they are now transforming into their dream home. It is believed that they plan on moving into the spatial 8,500-square-foot abode once their extensive renovations are completed. 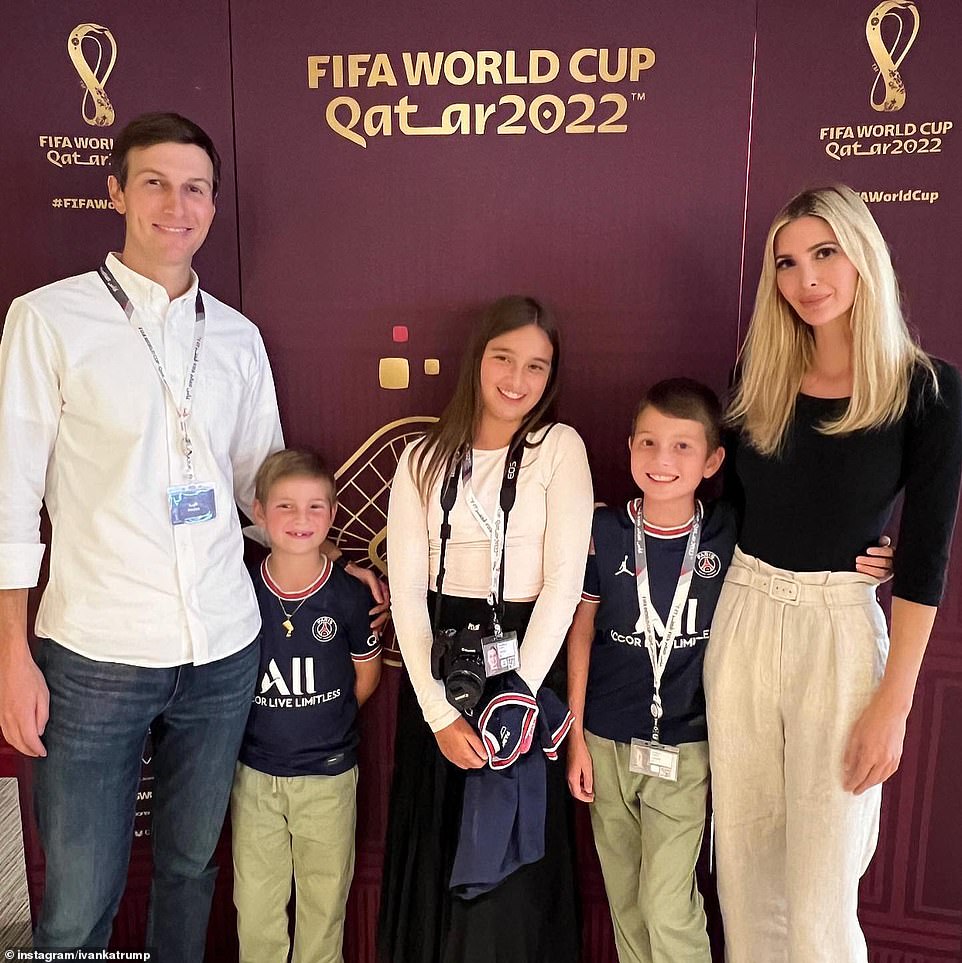 In the meantime, they have been living in a ritzy three-floor apartment at Arte Surfside, one of the most expensive condo buildings in Surfside, Florida. The residence, which is nestled between Miami Beach and Bal Harbour, has a tennis court on the roof, and they have their own private pool and yard. 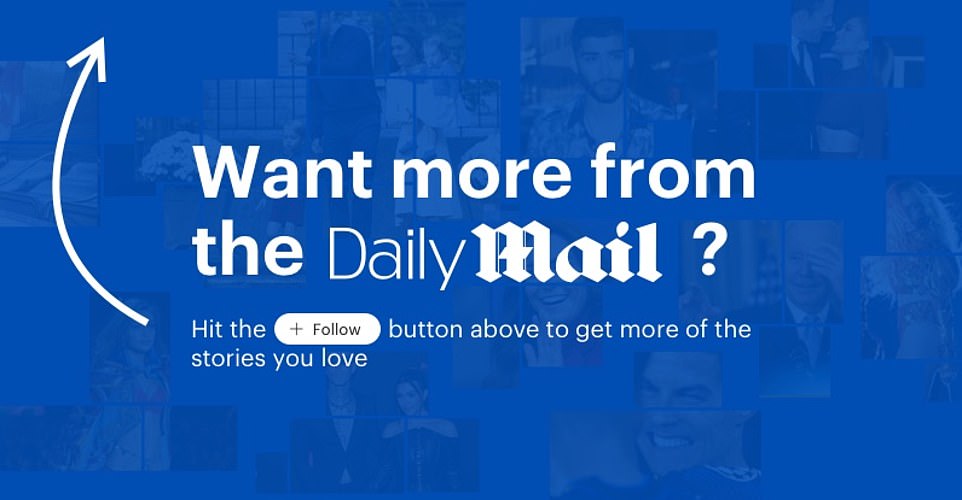