Ivanka Trump is insisting she is not pining for her old New York City life at all, despite making it clear she is thrilled to be back in her hometown.

The First Daughter, 35, opened up about her life in Washington, D.C. in an interview for The Dr. Oz show airing today.

A newly published clip shows her arriving for the segment, waving enthusiastically while saluting the audience with a huge smile across her face, and acknowledging how ‘very nice’ it is to be in her old stomping ground before even sitting down.

Past: Ivanka Trump insisted during an interview on The Dr. Oz show that she is not pining for her old New York City life, despite making it clear she is thrilled to be back in her hometown

Elated: The First Daughter, 35, seemed absolutely overjoyed to be on the TV set, waving enthusiastically while saluting the audience with a huge smile across her face

‘It’s so good to be here. Hi everyone!’ she said as the audience cheered. ‘And it is very nice to be back in New York.’

Ivanka seemed absolutely overjoyed to be on the TV set, giggling as she sat down to chat with Mehmet Oz, 57.

The host immediately asked her about her new life in D.C., where she has moved with her husband Jared Kushner, 36, and their three children Arabella, six, Joseph, three, and Theodore, one.

‘How has the family adapted to it?’ Mehmet asked.

‘Actually very well,’ Ivanka replied. ‘My kids are happy, which as a parent means I’m very happy. And that would be sort of a gating threshold issue for me if they weren’t adjusting well. But thankfully they’re loving their life down there.

‘We live in a house, which growing up in New York City and always having lived in apartment buildings we had never done before, so… We have a little backyard and a swing set. They love their schools, their beautiful parks. I get to take them to really explore Washington, D.C. and all the different museums and the monuments.

‘So it’s been an incredible adventure for the last eight months for them, and they’re very much enjoying it.’ 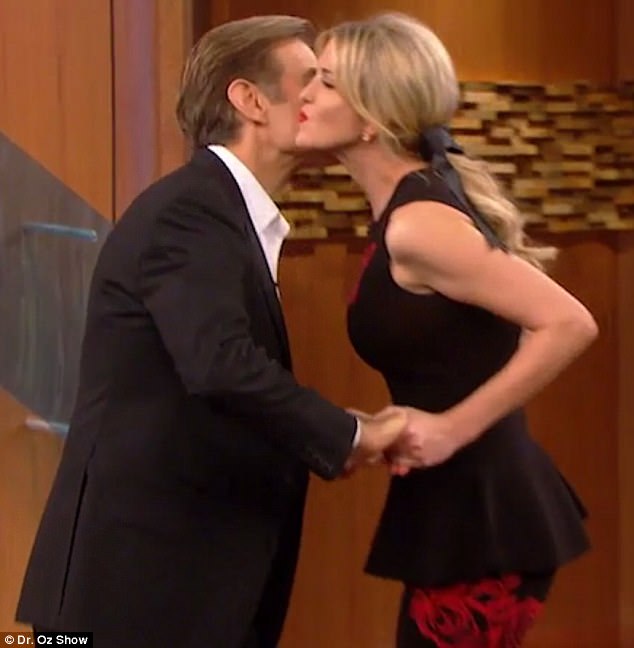 Diving right in: After welcoming Ivanka to the set affectionately, Mehmet Oz, 57, immediately asked her about her new life in D.C., where she has moved with her husband and children 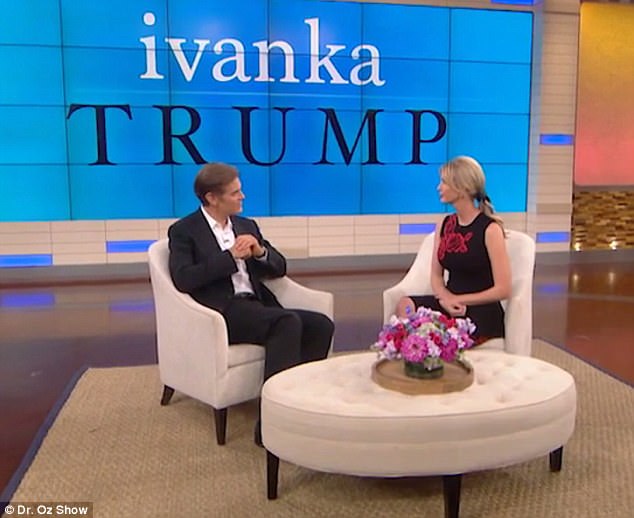 Not complaining: The First Daughter told the host her family has adjusted ‘very well’ to their new life, and that as a parent she is happy as long as her children are happy too

Mehmet then asked her if she ever woke up in the middle of the night wishing she could go back to her old ‘private’ life in New York City.

The First Daughter replied that, while she wakes up in the middle of the night ‘a lot’, it’s not because she is having wistful thoughts about her hometown.

‘This is such a remarkable journey for myself, my husband, our family. It’s such an incredible privilege to be able to serve this country,’ she added.

‘So I really am just incredibly focused, really just on the work that I’m doing and our family. And there’s not much time for a lot in between. But really for a country that has given so much to me and my family, to be able to try and give back and to be laser-focused on doing that is a blessing.’

Ivanka certainly seems to have relished returning to New York City over the past four days, making several bold fashion statements that have proved a real hit with photographers. 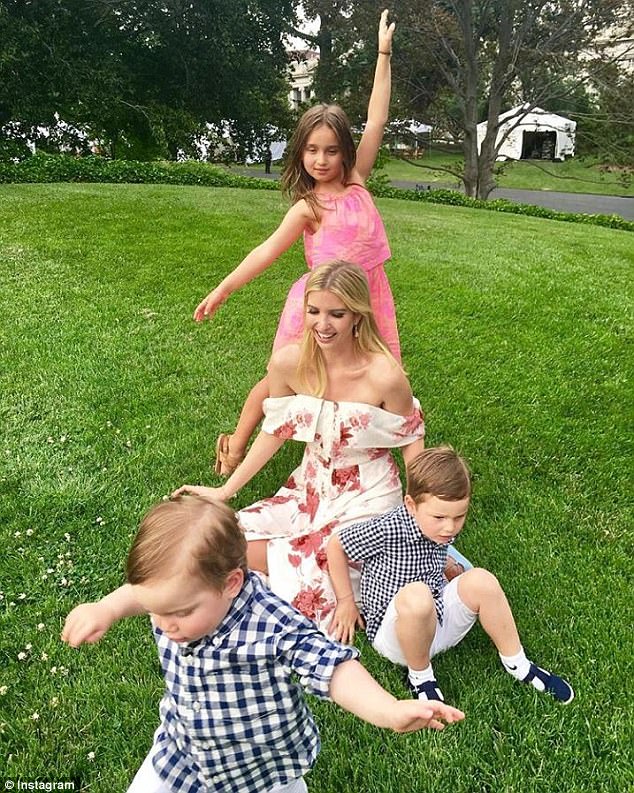 Much to enjoy: Ivanka pointed out that Arabella, six, Theodore, three, and Joseph, one, are living in a house for the first time in their lives 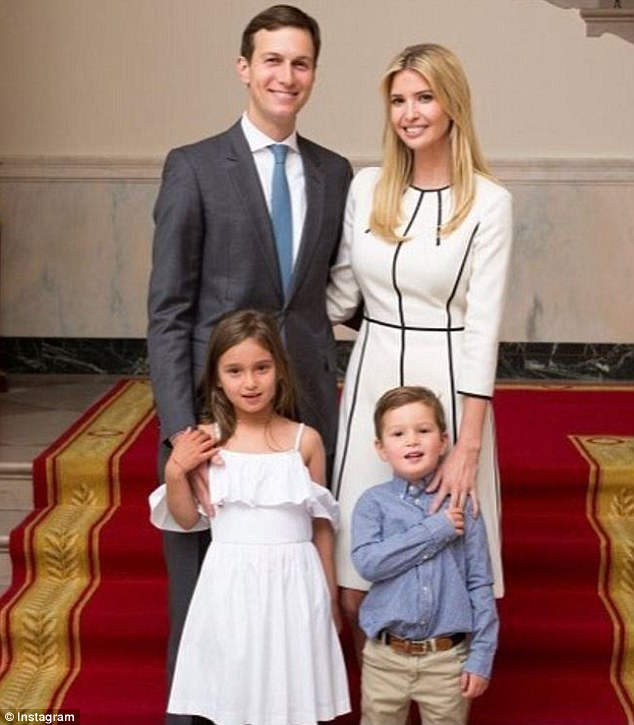 A new era: Ivanka and Jared, 36, moved to Washington, D.C. with their children after Ivanka’s father became president, and they now both work as his senior advisers 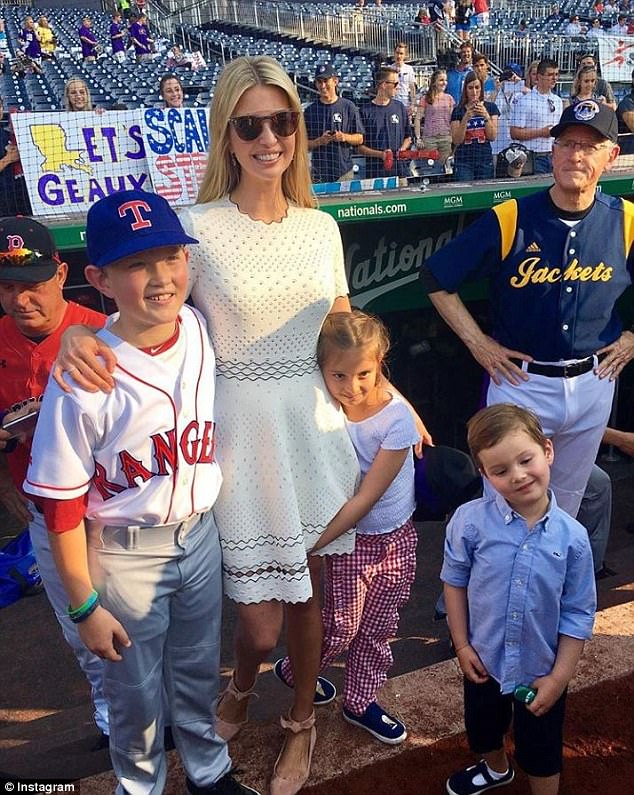 Fun times: The First Daughter told Mehmet they have had opportunities to enjoy Washington, D.C. including its monuments and museums 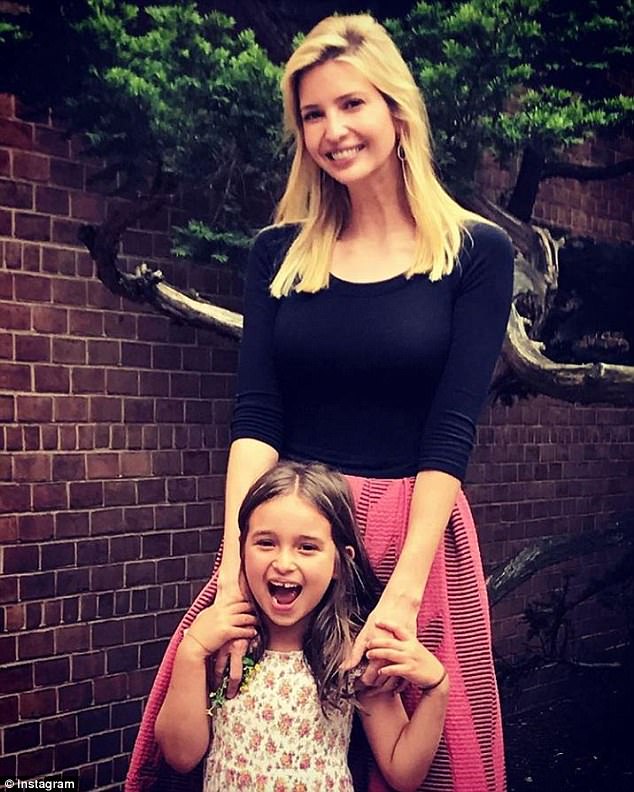 Together: Ivanka (pictured with her daughter Arabella) said that while she doesn’t miss New York City, it would have been a deal breaker for her if her children hadn’t enjoyed D.C.

She has also been enjoying some downtime in between her official duties, and was pictured on Tuesday night heading for an evening out.

The 35-year-old put on an incredibly glamorous display as she left her apartment, looking very chic in a black-and-white cold-shoulder dress that allowed her to show off some skin as she made her way out into the balmy evening.

Adding a bright splash of color to the monochrome ensemble, Ivanka – who was pictured without husband Jared – wore a pair of bright red patent leather slingback heels, as well as a slick of shiny scarlet lipstick.

Earlier on Tuesday, Ivanka showed off another chic ensemble as she made her way to the United Nations with husband Jared, in order to support her father, President Donald Trump, as he addressed the UN General Assembly for the first time.

Ivanka donned a camel colored skirt with black embellishments, which she paired with a black turtleneck and black ankle-strap heels. 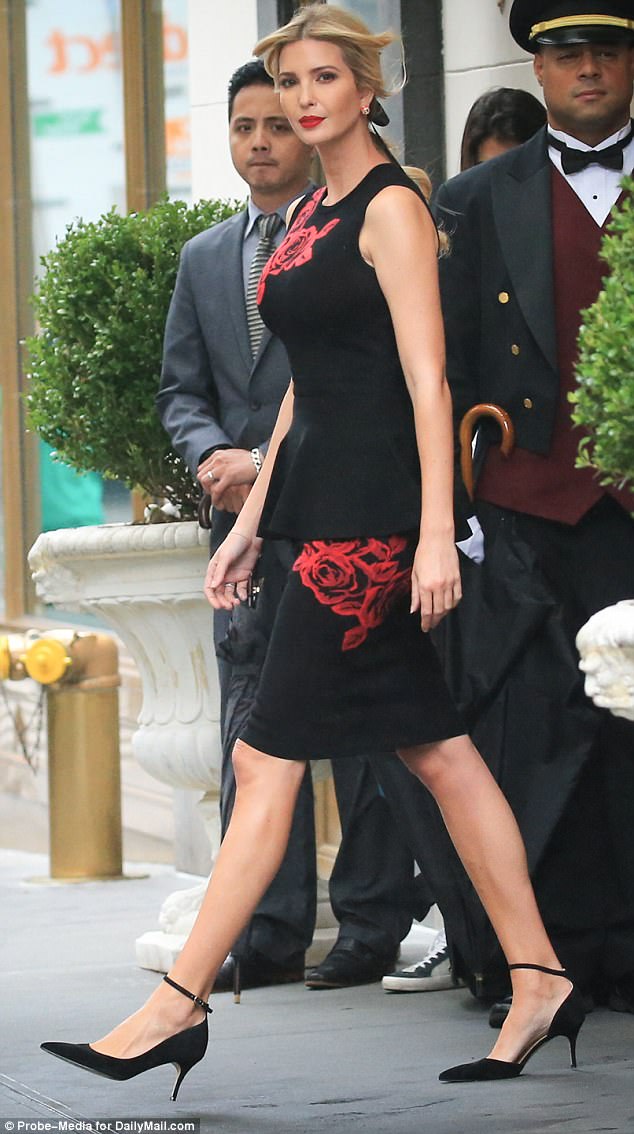 Edgy: For her Dr. Oz interview on Monday, she picked a black ensemble with a red floral design and peplum while debuting a new hairstyle

Duo: Ivanka and Jared, 36, looked to be in high spirits as they stepped out in New York on Tuesday morning, with Ivanka modelling a beige skirt with black embellishments 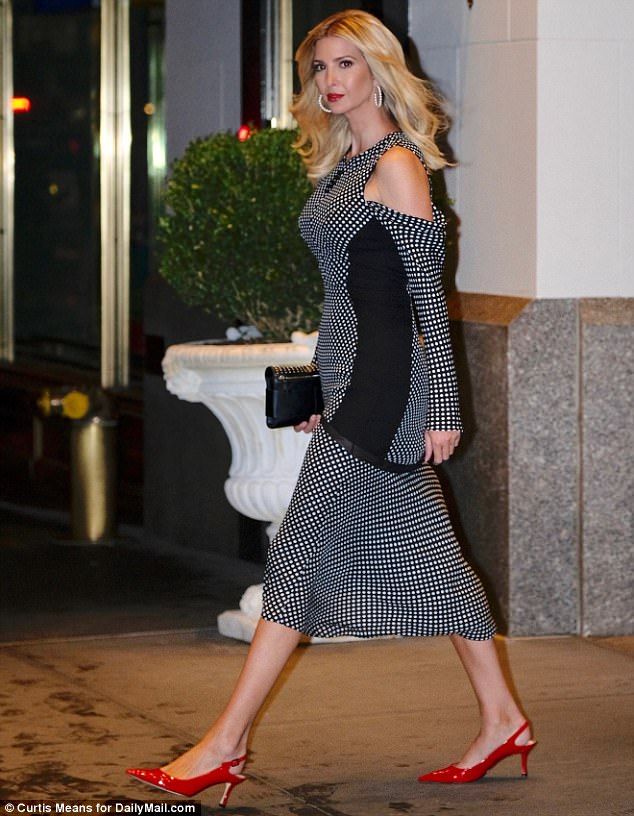 Out on the town! The First Daughter seems to have enjoyed some downtime too and looked incredibly glamorous as she left her New York City apartment on Tuesday evening

Suiting up: Ivanka cut a stylish figure as she stepped out in her hometown of New York City on Wednesday morning – before climbing into an SUV outside her apartment building

For her Dr. Oz interview on Monday, she picked a black ensemble with a red floral design and peplum while debuting a new hairstyle, with her long locks pulled into a low ponytail, tied with a big black bow.

During her sit-down with Mehmet, Ivanka also revealed that she suffered from postpartum depression after the birth of all three of her children, according to E! News.

‘With each of my three children I had some level of postpartum,’ she said.

After Dr. Oz asked her to clarify her statement, she confirmed that she had suffered from postpartum depression.

‘It was a very challenging, emotional time for me because I felt like I was not living up to my potential as a parent or as an entrepreneur and as an executive,’ she said. ‘And I had had such easy pregnancies that in some way the juxtaposition hit me even harder.’

Ivanka admitted during the interview that she didn’t realize she was willing to discuss something as personal as postpartum depression, until she had been asked the question.

‘It’s incredibly important and look I consider myself a very hard-charging person, I am ambitious, I’m passionate, I’m driven, but this is something that affects parents all over the country,’ she said.

Ivanka also spoke out about her role within the White House, revealing that she doesn’t believe it is her ‘obligation to moderate’ her father, as she insists her critics misunderstand her role as a White House senior adviser, addressing the expectation that she should be a moderating force in President Trump’s administration.

‘I think my role and [the role of] anyone who works for the President of the United States, their role is to inform, advise and then ultimately execute,’ she said. ‘So I am not the decision maker.

‘I have my views and I share them candidly — and as a daughter I have the latitude to do that,’ she continued. ‘But I also respect the process that my father is now president, and the America people elected him based on his agenda. My job isn’t to undermine that agenda.’ 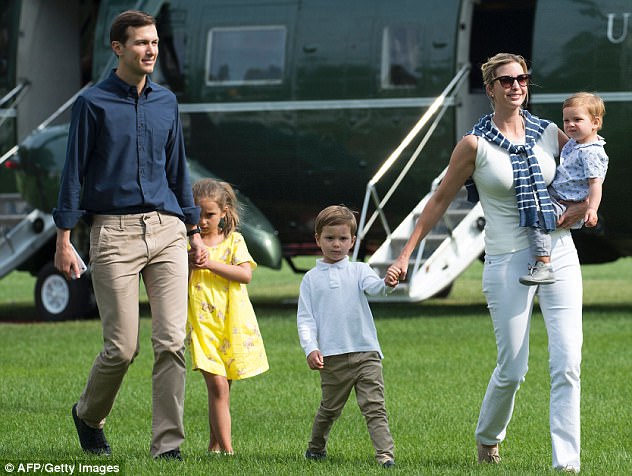 Full house: Ivanka and Jared are parents to a daughter, Arabella, six, and two sons, Joseph, three, and Theodore, one, and she had postpartum depression after all three births 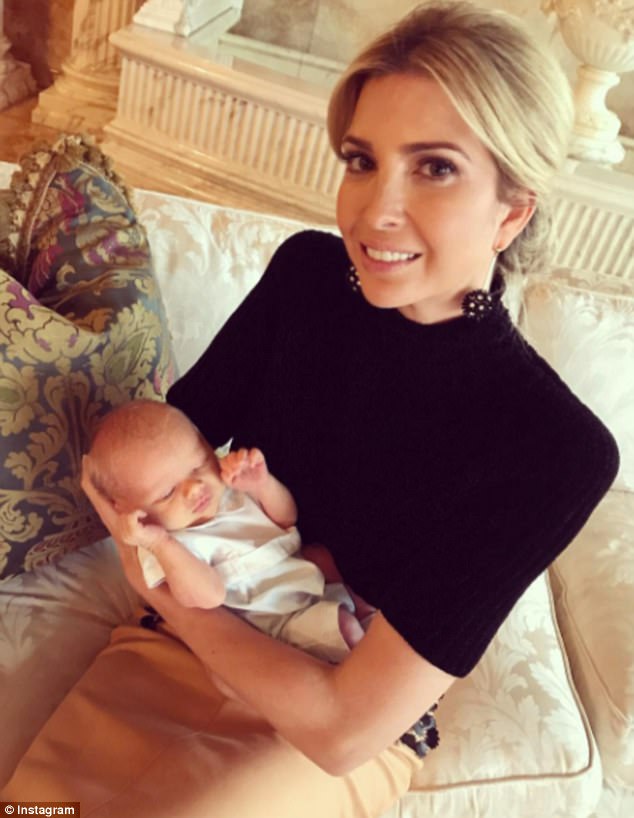 Auntie: Ivanka shared this picture of herself cuddling with her new nephew Luke, Eric and Lara’s newborn son, on what she deemed ‘an incredible day’ 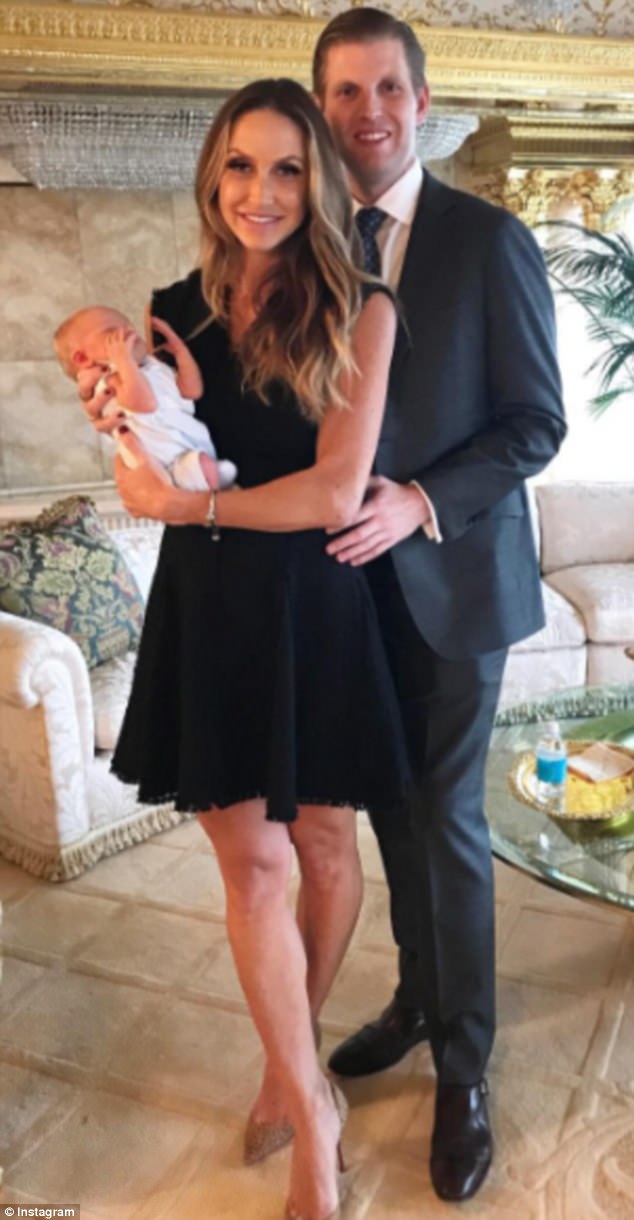 Proud parents: Lara also posted this photo of herself posing with Eric and little Luke at Trump Tower on Tuesday, wishing the newborn a ‘happy one week on Earth’

Ivanka went on to say that her role is to ’embrace the areas where there is commonality’, explaining she is ‘deeply passionate about fueling the grown of women entrepreneurs’ and ‘supporting American working families’.

Trump’s eldest daughter said she feels ‘privileged’ that he has given her a platform to push the areas and issues that are important to her when they are aligned with his agenda.

‘Where I disagree with the agenda, I will share it with him quietly,’ she added. ‘I don’t view it as my obligation to moderate. And I don’t think anyone working for a sitting president should see themselves in that capacity.’

Many of Ivanka’s critics accuse her of being a fake feminist, and those who thought she would be a moderating force in the White House have been disappointed in her inability to affect her father’s agenda.

While refusing to name the first daughter directly, Hillary Clinton recently shared her belief that Ivanka should be her ‘held accountable’ for supporting his agenda.

‘Everyone associated with him, they’re either on-board with that, or they’re not, and if they’re not, they need to be speaking out or leaving,’ she said in an interview with Refinery29.

During the taping, Ivanka also commented on Hillary’s newly-published book, What Happened, in which the former Democratic candidate reveals her tale of the election that saw Ivanka’s father become commander in chief.

‘Was blown away by how beautiful and elegant Ivanka Trump was,’ an audience member wrote on Facebook.

‘The highlight of the show was when Ivanka joked about taking over her father’s Twitter account. I’m surprised she even commented on [Hillary Clinton’s] book …’