Two months after she traveled to South Korea to cheer on Team USA at the Winter Olympics in PyeongChang, Ivanka Trump joined her father in honoring the athletes at the White House — but some of the most famous faces chose not to attend.

The 36-year-old first daughter donned $445 floral top and a $540 matching skirt from Kenzo to watch her dad, President Donald Trump, pay tribute to the members of the U.S. Winter Olympic and Paralympic teams in the North Portico on Friday.

Ivanka highlighted her figure by belting her loose-fitting floral top and calf-length skirt with a black sash, and she wore her long blonde hair loose around her shoulders.

Celebration; Ivanka Trump, 36, joined her father, President Donald Trump, in honoring members of the U.S. Winter Olympic and Paralympic teams at the White House on Friday 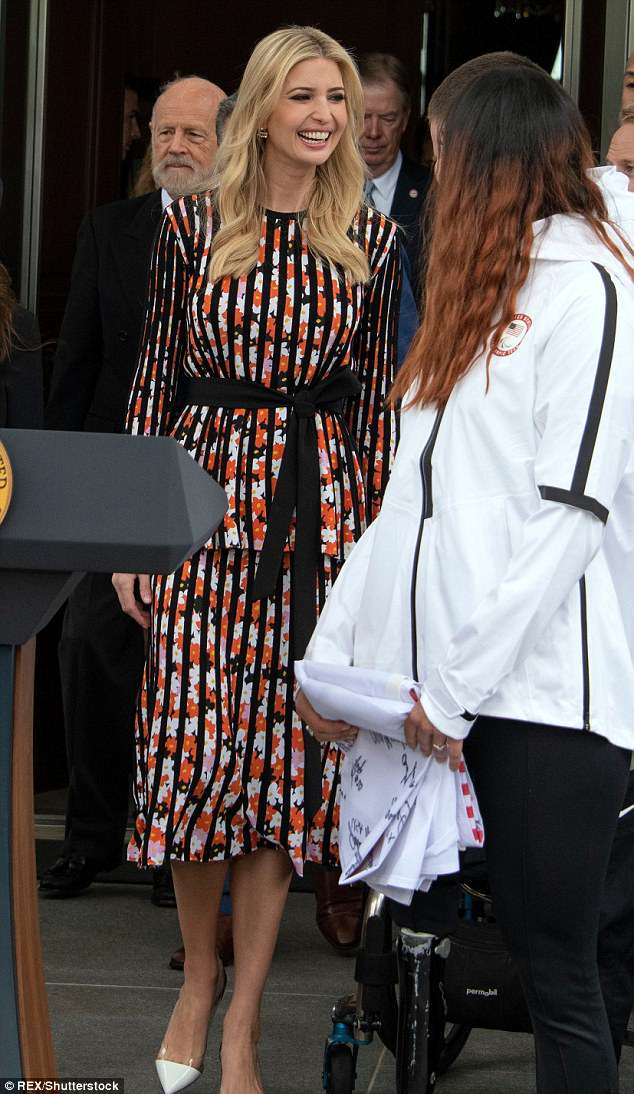 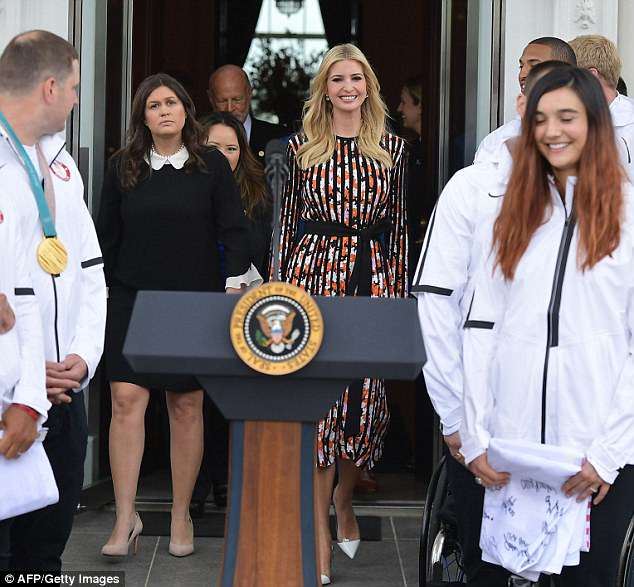 Added touch: Ivanka topped off her look with white cap toe pumps and a black sash tied around her waist

She topped off her ladylike look with a pair of white cap toe pumps.

The senior adviser, who led the U.S. delegation at the Winter Games closing ceremony in February, had a bright smile on her face when she shook hands with the athletes who attended the reception.

Ivanka stood alongside the Olympians during the ceremony, and she was photographed laughing and smiling throughout the reception.

‘You performed and you made us very proud,’ President Trump told members of the Olympic and Paralympic teams on the White House steps.

‘And many of you came home as champions wearing a bronze, silver, or a gold medal.’ 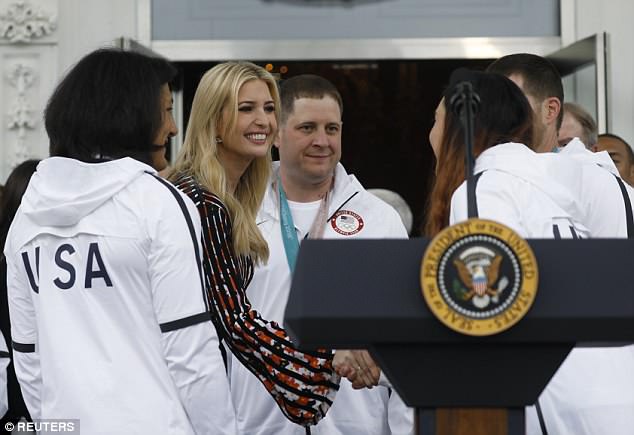 Happy day: The senior adviser had a bright smile on her face when she shook hands with the athletes who attended the reception 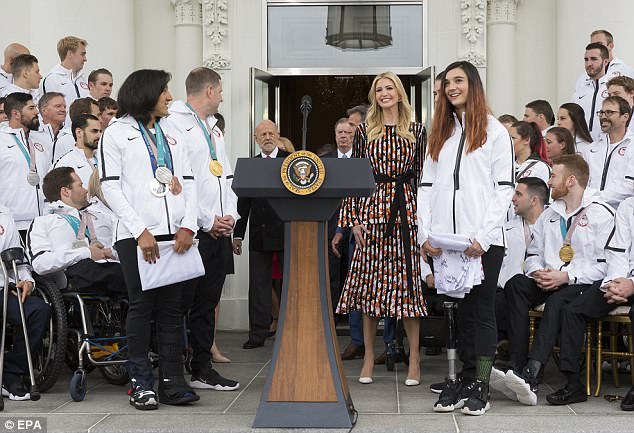 Enjoying herself: Ivanka stood alongside the Olympians during the ceremony 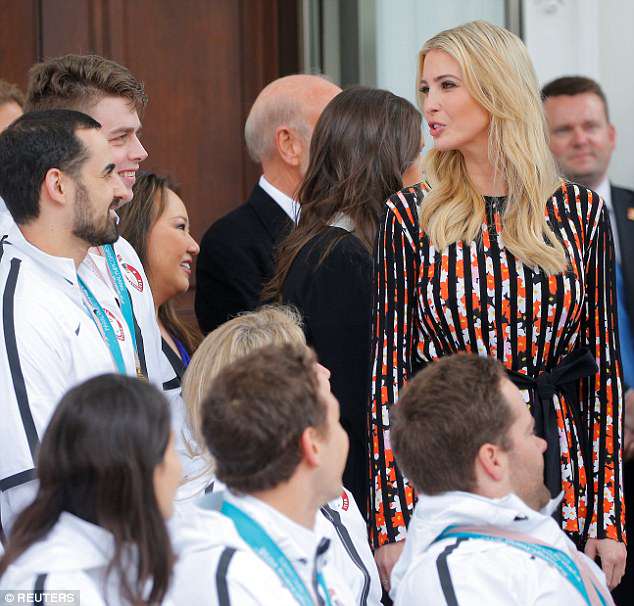 Chatting away: Ivanka was photographed laughing and smiling throughout the reception

‘A lot of good things are happening right now over there,’ Trump said. ‘And the Olympics really helped to bring it all together.”

Trump praised the Olympic athletes, who were dressed in their white USA team outfits, some wearing medals, as ‘very, very special people’ and ‘winners.’

The members of the Olympic and Paralympic teams presented the president with flags signed by the delegations. 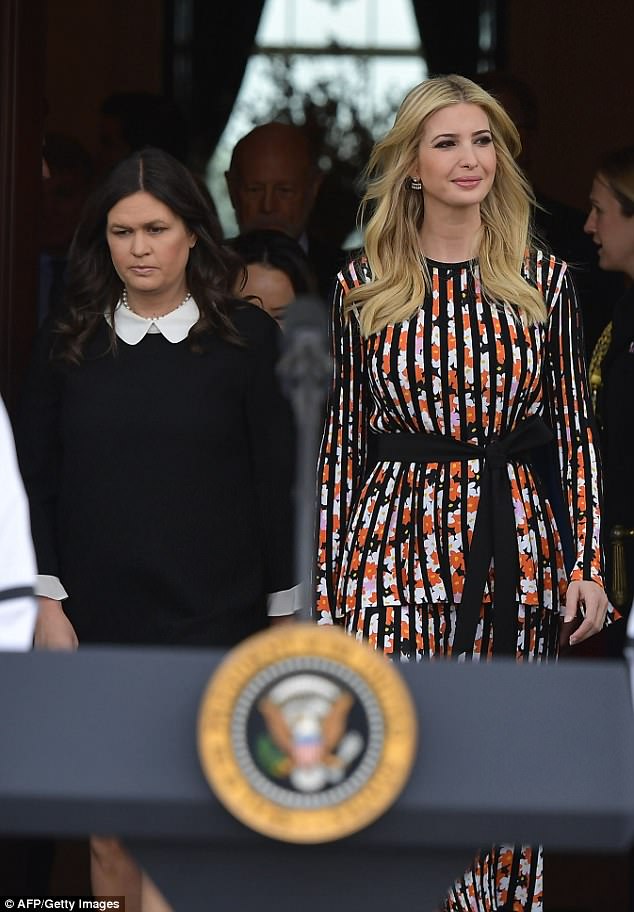 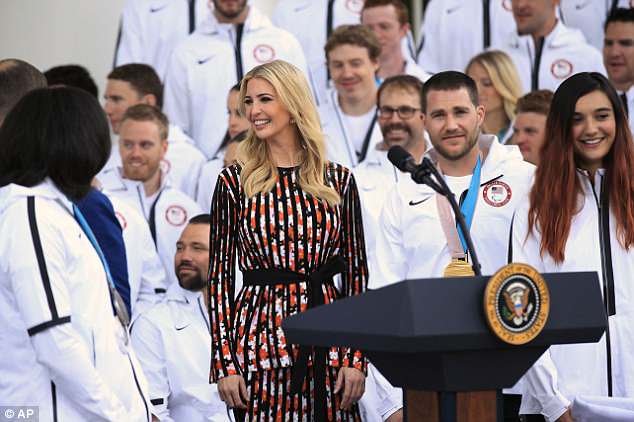 No shows: Invites were extended to about 200 Winter Olympians and Paralympians with roughly one-third of Team USA declining to participate in the festivities 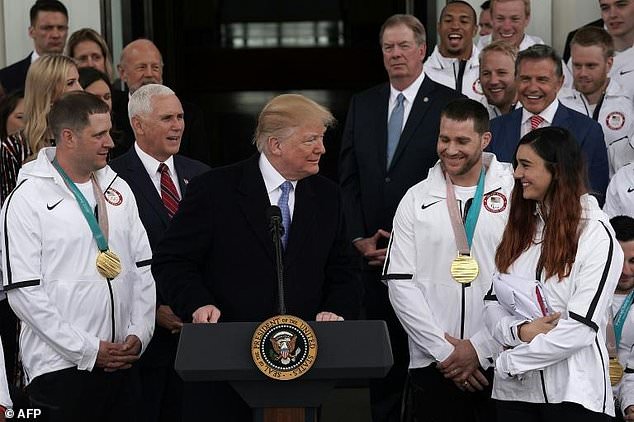 However, some of Team USA’s most notable athletes were noticeably absent from the event hosted by President Trump.

Invites were extended to about 200 Winter Olympians and Paralympians with roughly one-third of Team USA declining to participate in the festivities at nation’s capital, according to AOL News.

Alpine skier Lindsey Vonn, figure skater Adam Rippon, and freestyle skier Gus Kenworthy have all spoke out against the Trump administration and were among those who skipped out on the White House visit.

Kenworthy, an openly gay Olympian, celebrated the number of athletes who opted not to attend the event on Friday.

‘All US Olympians and Paralympians are invited to visit the White House and meet the President after the Games. Today is this year’s visit and USOC spokesperson says he’s never seen so many athletes turn down their invites. The resistance is real,’ he tweeted. 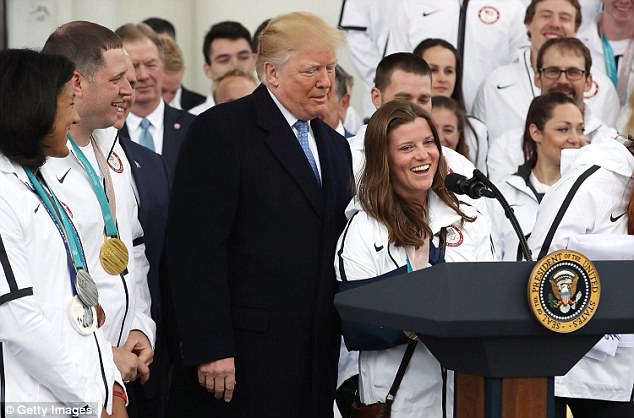 Behind the podium: President Trump looked on as Olympic bronze medalist snowboarder Arielle Gold spoke at the reception 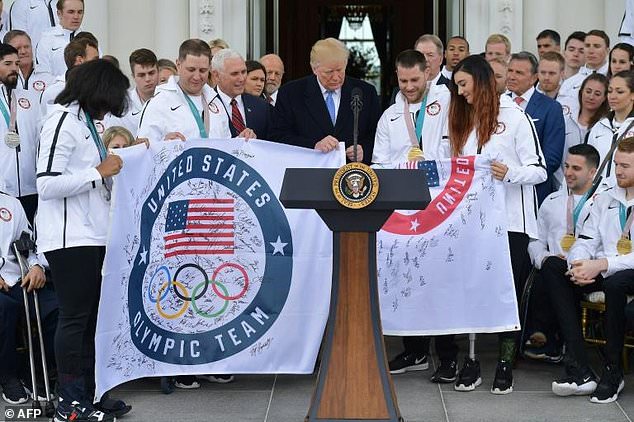 Gift: Members of the US Olympic and Paralympic teams present President Trump with team flags at the White House 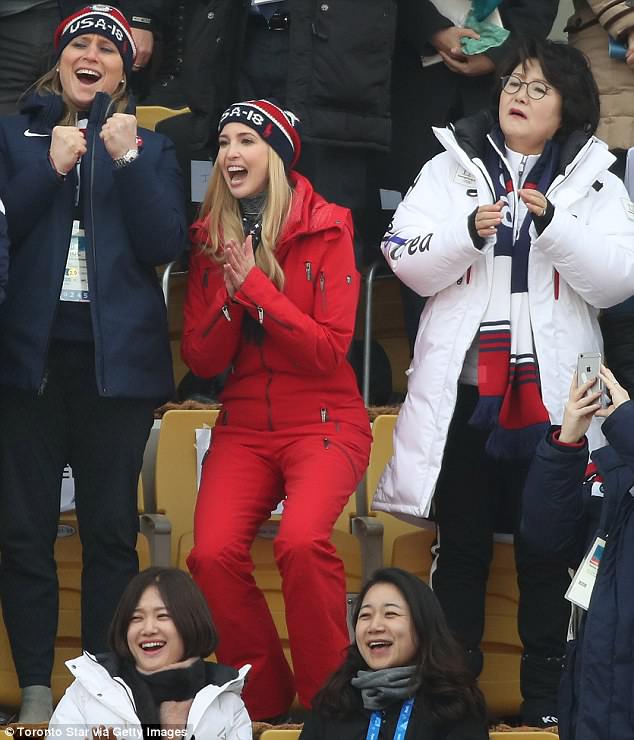 Face of the administration: Ivanka traveled to South Korea to cheer on Team USA at the Pyeongchang Winter Olympics (pictured) earlier this year 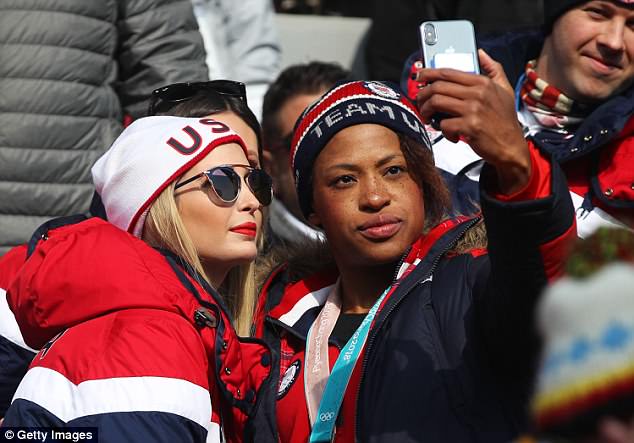 Making friends: Although she received some backlash for attending the Olympics and the closing ceremony, bobsledder Lauren Gibbs happily posed for a selfie with her

In February, Kenworthy took to Twitter to share a photo of American athletes at the closing ceremony, while slamming Ivanka for attending the event.

‘So proud of all these people! Everybody here has worked so hard to make it to the Olympics and have the opportunity to walk in the closing ceremony! Well… Everyone except Ivanka. Honestly, tf is she doing here??’ he wrote.

‘Ivanka’s beautiful. She’s elegant. She was an incredible representative of this country and we should be very proud of her,’ he said.

Meanwhile, Rippon, the first openly gay U.S. athlete to qualify for the Winter Olympics, called out Vice President Mike Pence for his opposition to gay rights. 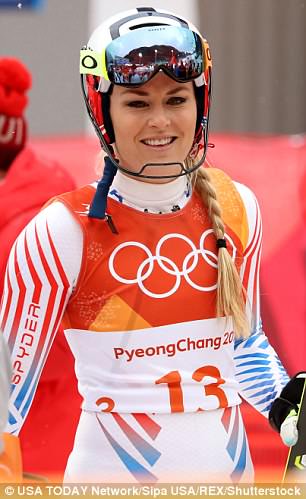 No thanks: Alpine skier Lindsey Vonn (L) and figure skater Adam Rippon (R) were among the Olympians who declined their invites to the White House reception due to political reasons 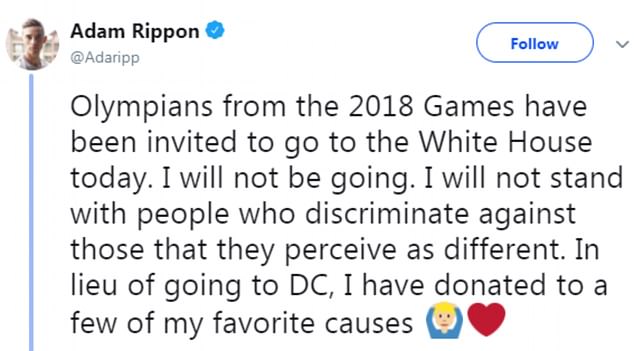 ‘I will not stand with people who discriminate’: Rippon, the first openly gay U.S. athlete to qualify for the Winter Olympics, tweeted about his absence on Friday 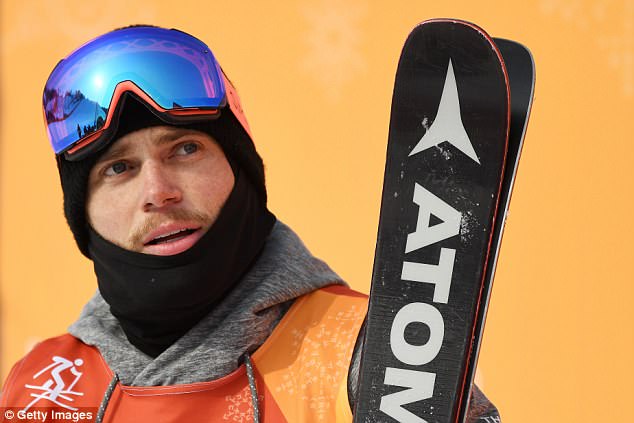 Standing his ground: Gus Kenworthy, an openly gay Olympian and an open critic of the Trump administration, also skipped out on the event and applauded others for doing so

Warning: ‘The resistance is real,’ Kenworthy tweeted on Friday 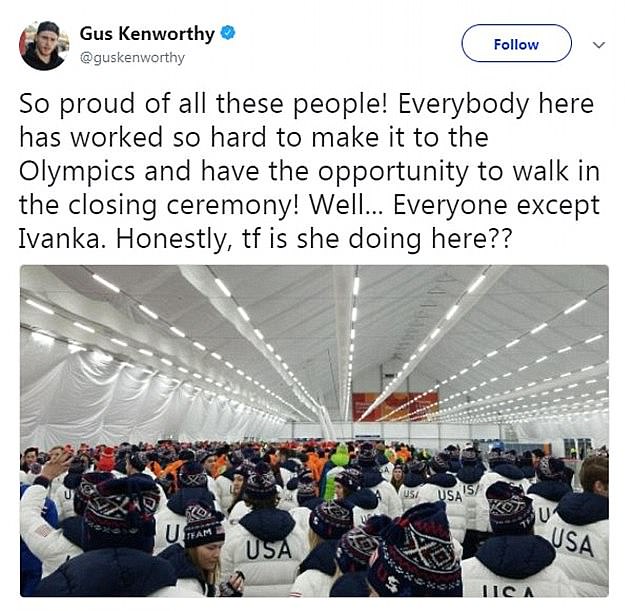 Not a fan: In February, Kenworthy took to Twitter to share a photo of American athletes at the closing ceremony, while slamming Ivanka for attending the event

Rippon tweeted about his absence on Friday, writing: ‘Olympians from the 2018 Games have been invited to go to the White House today. I will not be going.

While Vonn, Rippon, and Kenworthy have made it clear that they are missing the event for political reasons, others had varying reasons for skipping the reception.

Snowboarders Chloe Kim and Shaun White said they are attending weddings, while figure skater Mirai Nagasu and other Olympic athletes are preparing to compete on ‘Dancing With the Stars.’