Ivanka Trump has publicly emerged for the first time since it was confirmed that her personal assistant had tested positive for COVID-19.

The first daughter was pictured leaving her Washington, D.C. home on Friday morning, when she covered her mouth and nose with a black face mask, which she had accessorized with an American flag pin.

Ivanka, 38, matched the protective gear to her outfit, opting to wear an all-black $129 Kenneth Cole jumpsuit, and she completed the ensemble with some black-and-white $750 Chanel ballerina flats.

Out and about: Ivanka Trump was pictured on Friday morning for the first time since it was confirmed that her personal assistant had tested positive for COVID-19 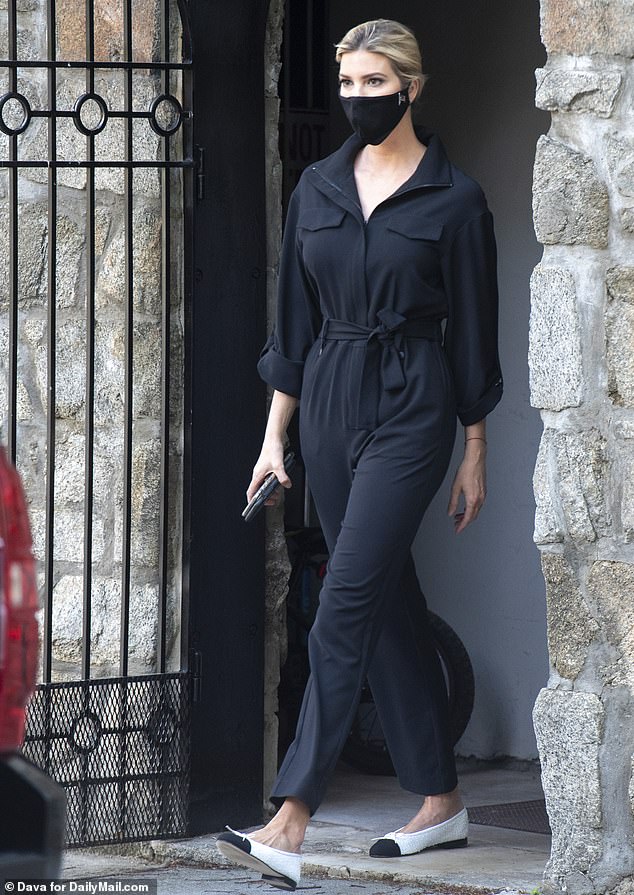 Safety first: She was pictured leaving her Washington, D.C. home wearing a black face mask and a matching $129 Kenneth Cole jumpsuit, which she paired with $750 Chanel shoes 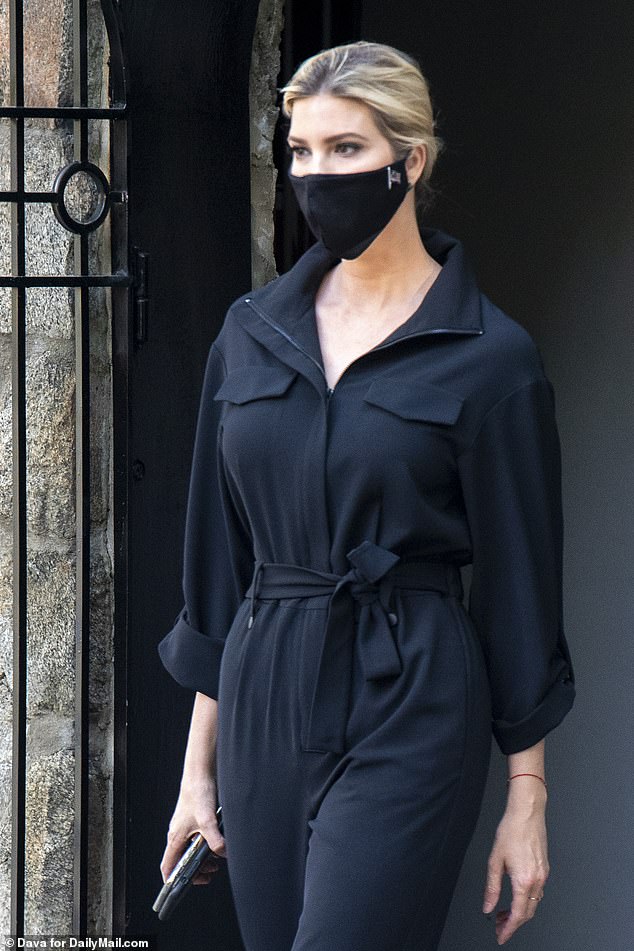 Bare minimum: The 38-year-old did not carry a handbag, but she was seen with two iPhones in her right hand as she exited the home she shares with husband Jared Kushner and their kids

The black jumpsuit featured long sleeves and pants, a zip collar, and a ribbon tie at the waist to cinch the baggy design in.

As for accessories, Ivanka kept things simple, going without her usual handbag, and instead just carrying two iPhones in her right hand as she emerged from the home she shares with husband Jared Kushner, 39, and their three children. 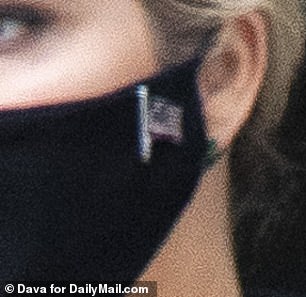 Accessories: Ivanka added an American flag pin to the side of her black face mask

Ivanka’s appearance comes one week after it was confirmed that her unnamed personal assistant had tested positive for the coronavirus, adding to the growing number of White House personnel who have come down with the virus.

According to CNN, the assistant had not been around Ivanka for several weeks prior to her positive test – and both Ivanka and Jared, who work as special advisers to the president, had tested negative for COVID-19.

Some 60 employees of the agency charged with protecting President Donald Trump and other senior government officials were in quarantine due to the outbreak as of last week, according to Department of Homeland Security documents obtained by Yahoo News.

Ivanka has kept an incredibly low profile throughout the past six weeks – and Friday morning’s sighting is the first time the mother-of-three has stepped out in public since April 28, when she attended a small business event at the White House. 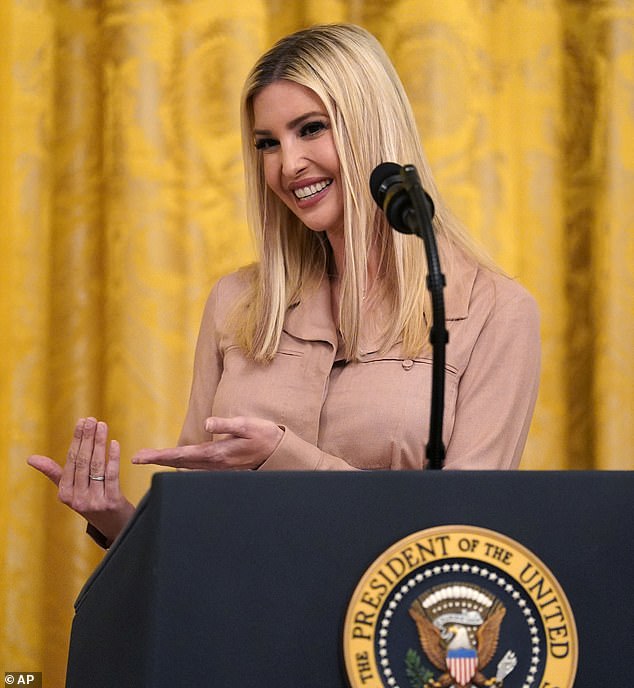 Low profile: The mother-of-three has not been seen in public since April 28, when she attended a small business event at the White House 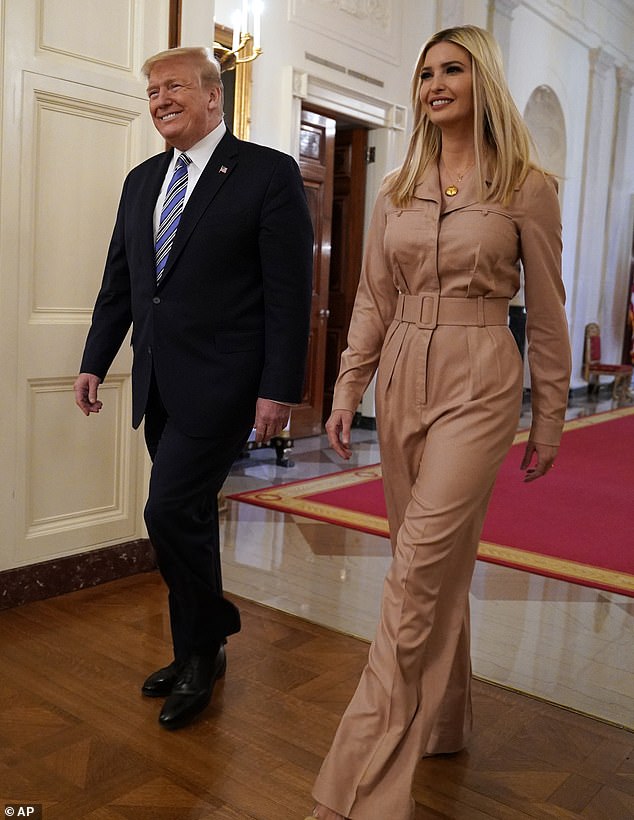 Changing her tune: At the event, both Ivanka and her father, President Donald Trump, chose to go without a face mask or covering 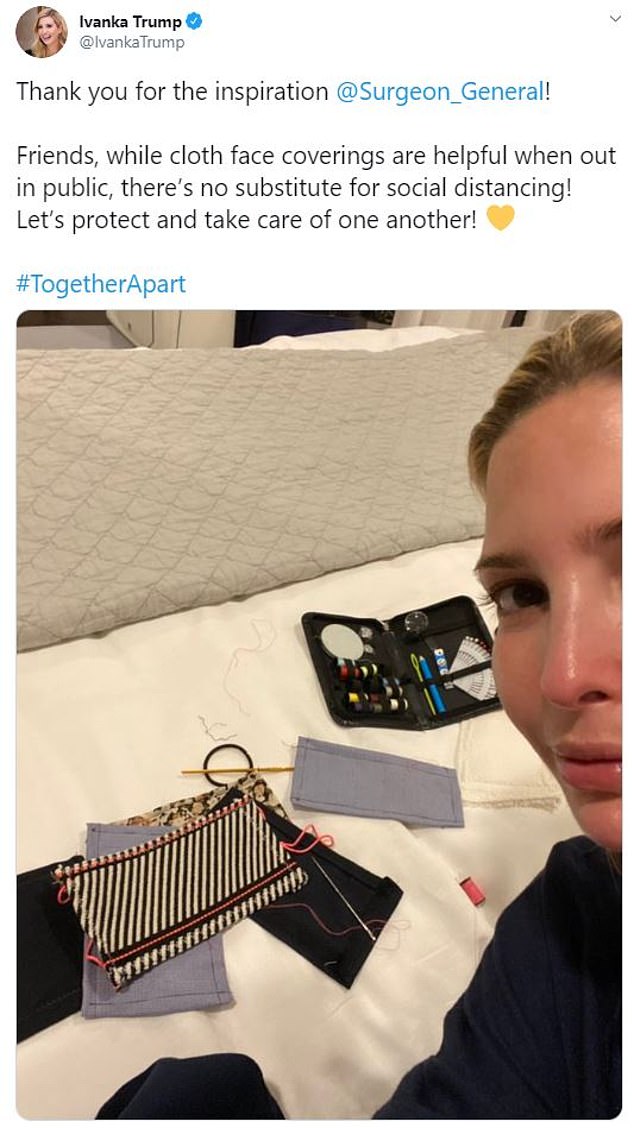 Project: Prior to the April 28 event, Ivanka had spent time with her children quarantining at her father’s golf club in New Jersey – however she found time for a sewing project before then 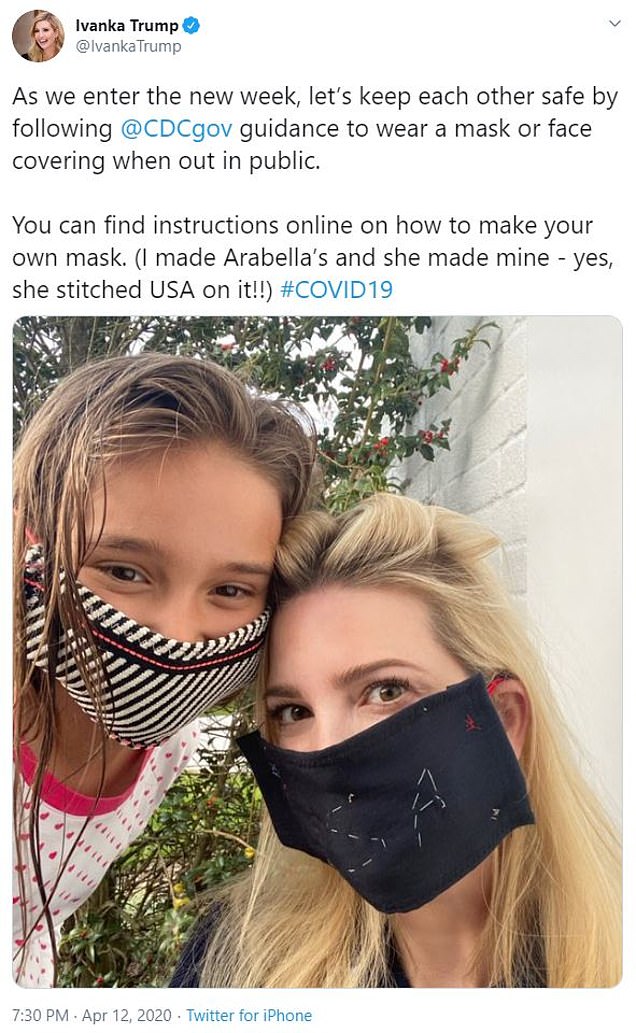 Creative: Ivanka and her daughter Arabella sewed their own masks at home – and the first daughter urged people to ‘follow CDC guidance’ when it comes to wearing face coverings

Prior to that, the first daughter had left D.C. in order to quarantine with and her three children, Arabella, Joseph, and Theodore, at her father’s golf club in Bedminster, New Jersey, where they are understood to have spent Passover.

Ivanka and her kids sidestepped D.C.’s stay-home order prohibiting non-essential travel in mid-April when they traveled to the president’s golf club; she was not seen in D.C. for several weeks until her return for the small business event.

At the event, Ivanka did not wear a face mask – nor did her father – however the first daughter took to social media in the days before her departure for Bedminster to post a picture of herself and daughter Arabella wearing masks that they had made themselves at home.

She revealed that she had made her daughter’s mask, while eight-year-old Arabella had sewn one for her mother.

In the posts, Ivanka added that ‘cloth face coverings are helpful when out in public’, but noted that ‘there’s no substitute for social distancing’.

She then urged her followers to ‘follow CDC guidance to wear a mask or face covering when out in public’.