Ivanka Trump was seen having fun in the sun with her husband Jared Kushner and their sons on the beach in Miami during the Memorial day weekend.

The former first daughter, 40, who also served as White House adviser under her father’s administration, and her husband Jared, 41, also a former adviser to president Trump, wore their best beach attire and hit the white sands of Miami with their two boys, Joseph, 8, and Theodore, 6 .

The couple’s 11-year-old daughter, Arabella, did not join the family for the outing on Sunday.

Ivanka wore a white lace beach outfit that fell just above her knees, while remaining barefoot. She completed her look by donning black sunglasses and a chic straw hat to shade her blonde hair.

Ivanka Trump and husband Jared Kushner spent Memorial Day Weekend by the beach in Miami. Ivanka was spotted holding an inflatable golden tube while wearing a big straw hat, which flew off at one point. Jared was the doting dad playing with his two sons in the water 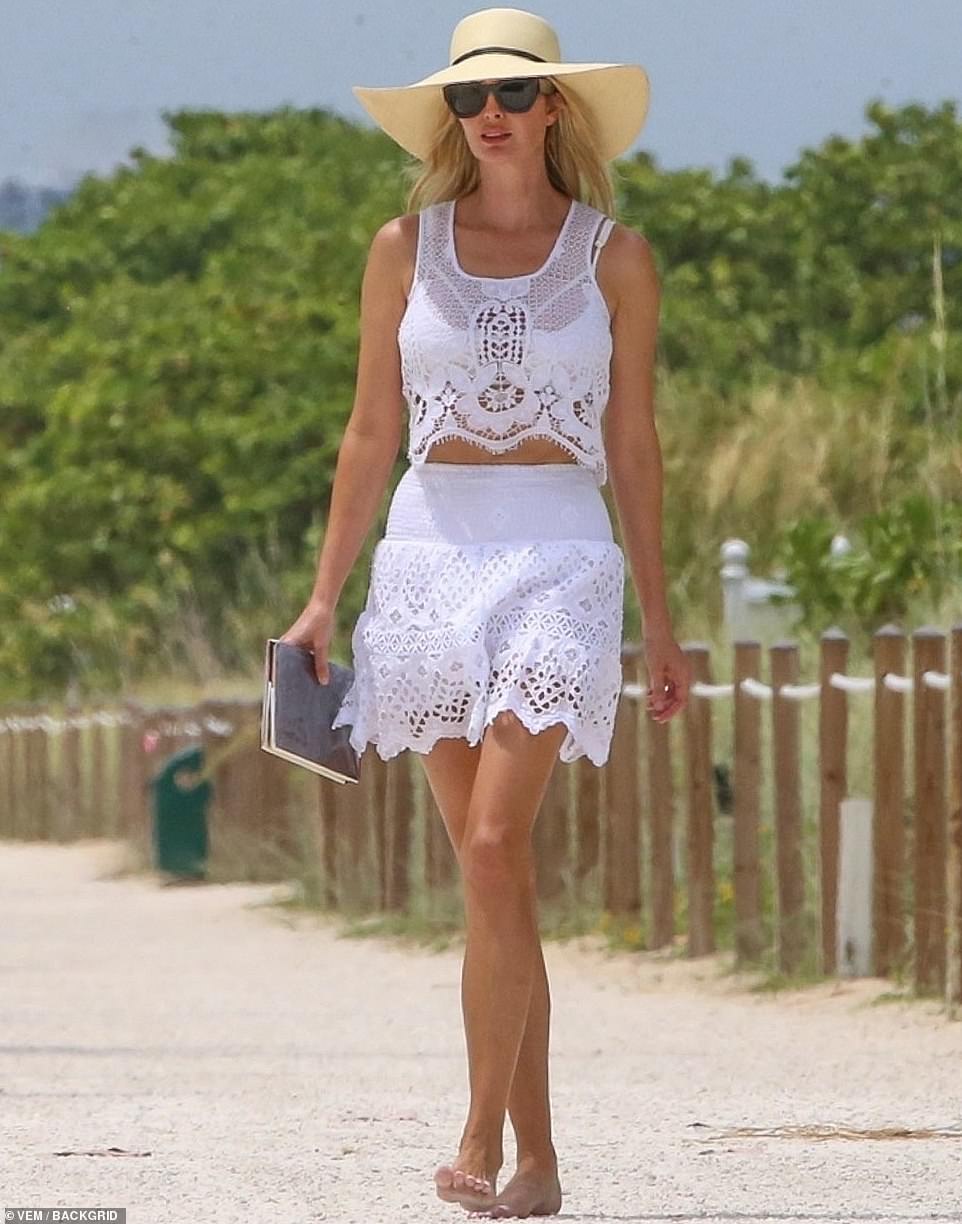 Ivanka, 40, the former White House adviser, wore a lace cover up and some black shades as she hit the  the white sands of Miami with her family 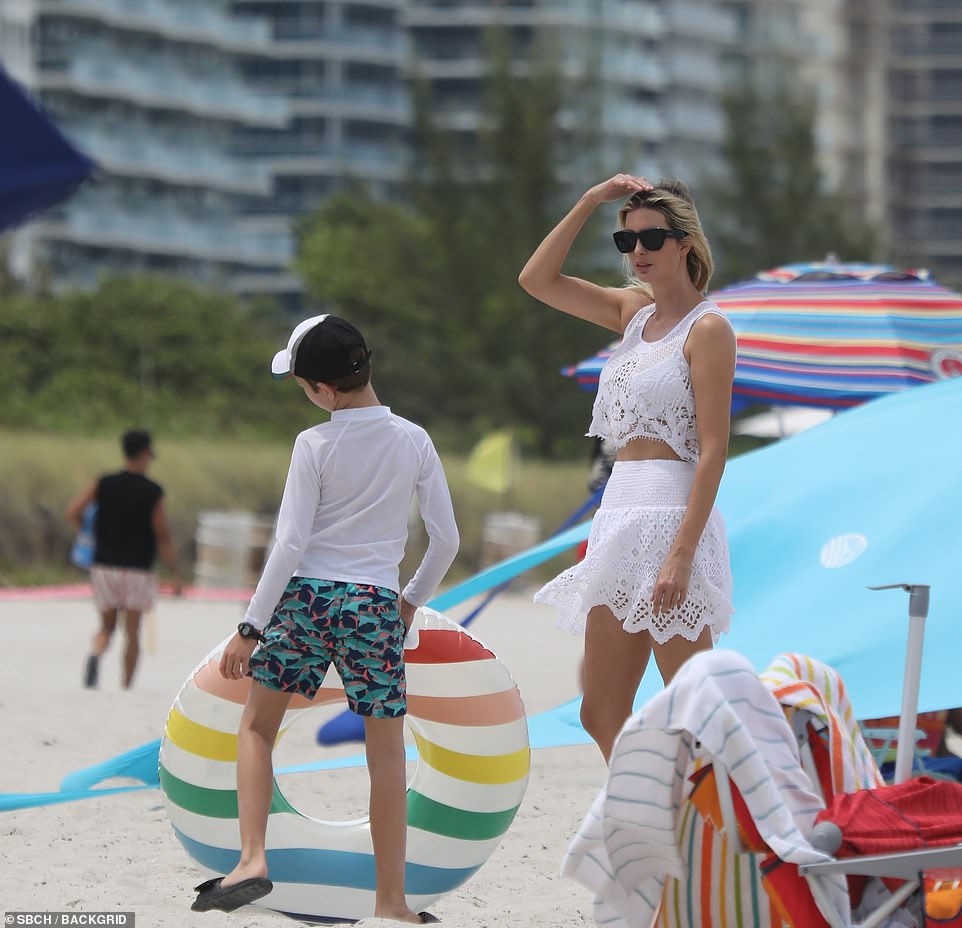 Ivanka kept a close eye on her 8-year-old and 6-year-old sons, who spent the day in the water, while she relaxed by the shore 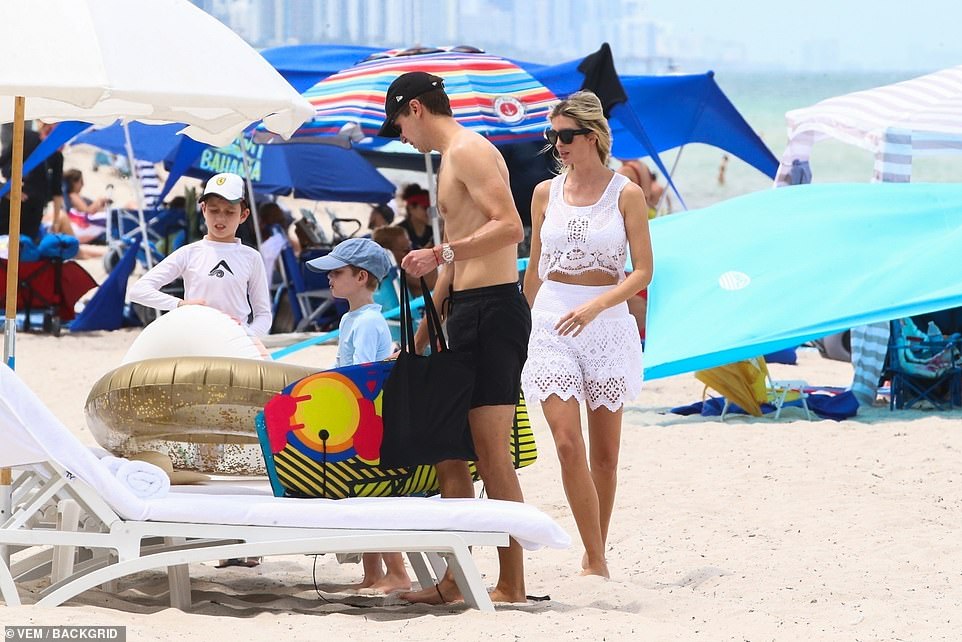 The Trump-Kushner family were pictured with two of their three children, Theodore and Joseph, on Sunday. Ivanka and Jared’s daughter, Arabella, was not spotted at the beach 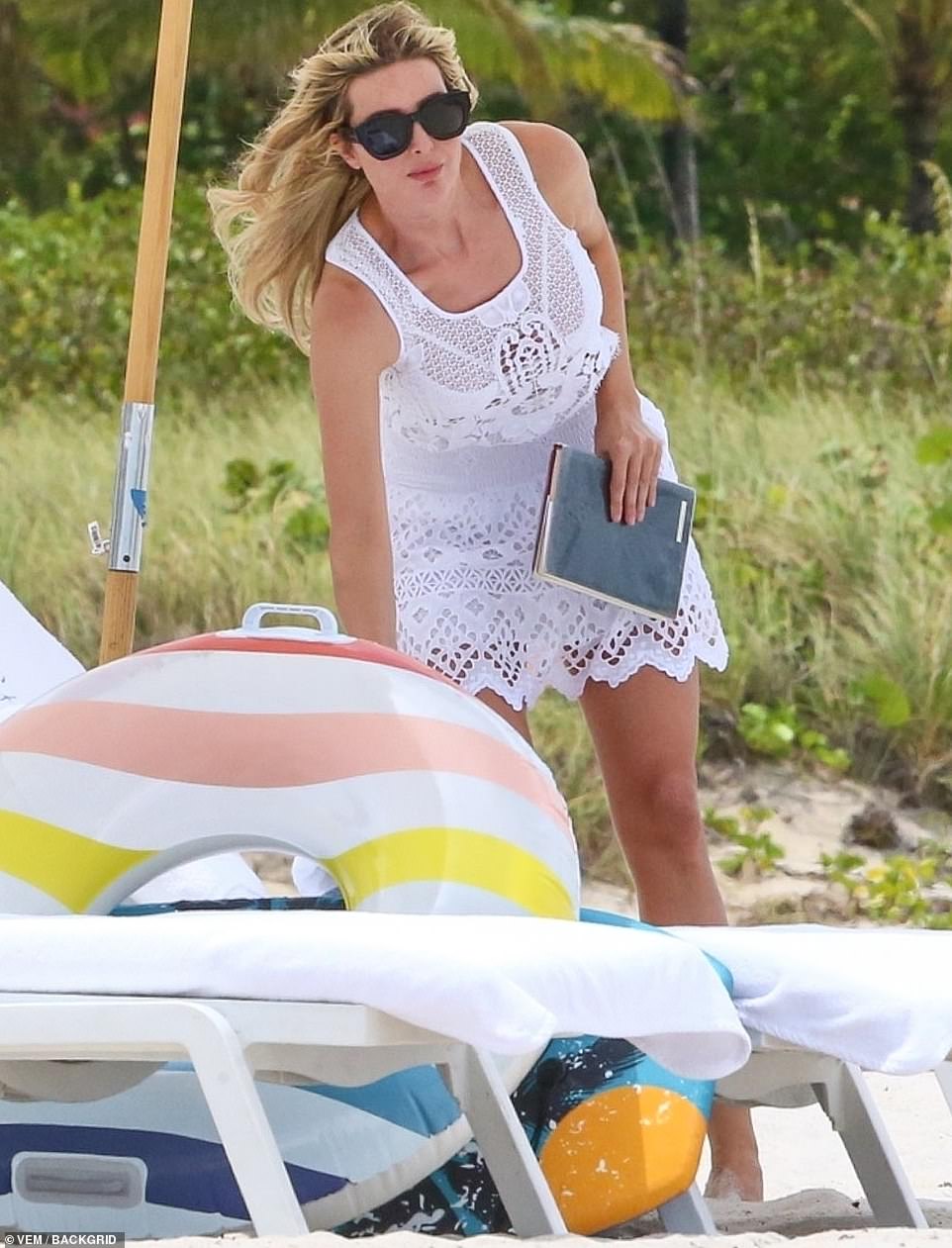 At one point, Ivanka got up from her lounge chair after reading The Inner Reaches of Outer Space: Metaphor as Myth and as Religion, by Joseph Campbell 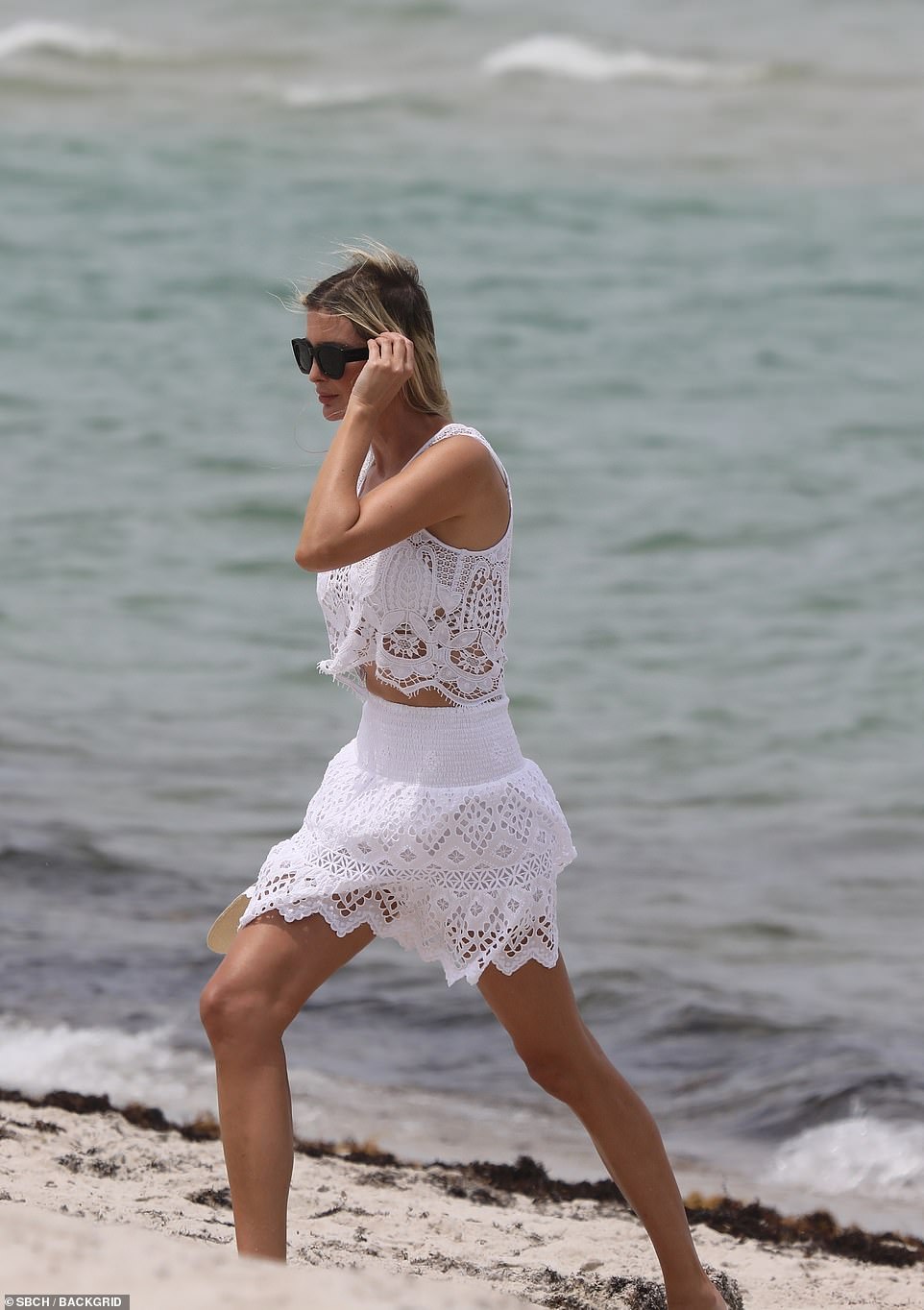 Ivanka looked tan as she put her legs on display after checking-in with her husband and two sons, who were having some fun in the water

Jared wore a pair of black swim-trunks and wore a black baseball cap. He was mostly shirtless throughout the family’s sunny beach day on Florida’s shore.

The couple held hands with their two young sons, accompanying them to water and helping them carry inflatable tubes and their boogie-boards. Jared jumped into the waves with the boys while Ivanka stayed ashore, relaxing on a lounge chair to flip through a book in the shade.

She was reading The Inner Reaches of Outer Space: Metaphor as Myth and as Religion, by Joseph Campbell.

At one point, Ivanka could be seen getting up and making sure that her boys were safe in the water with their father. Jared eventually came back to his wife with their kids from the water as they were seen having a discussion.

It seemed to be a packed day on Miami’s coastline as many Americans were enjoying their three-day weekend under the sun before eventually returning to work on Tuesday. 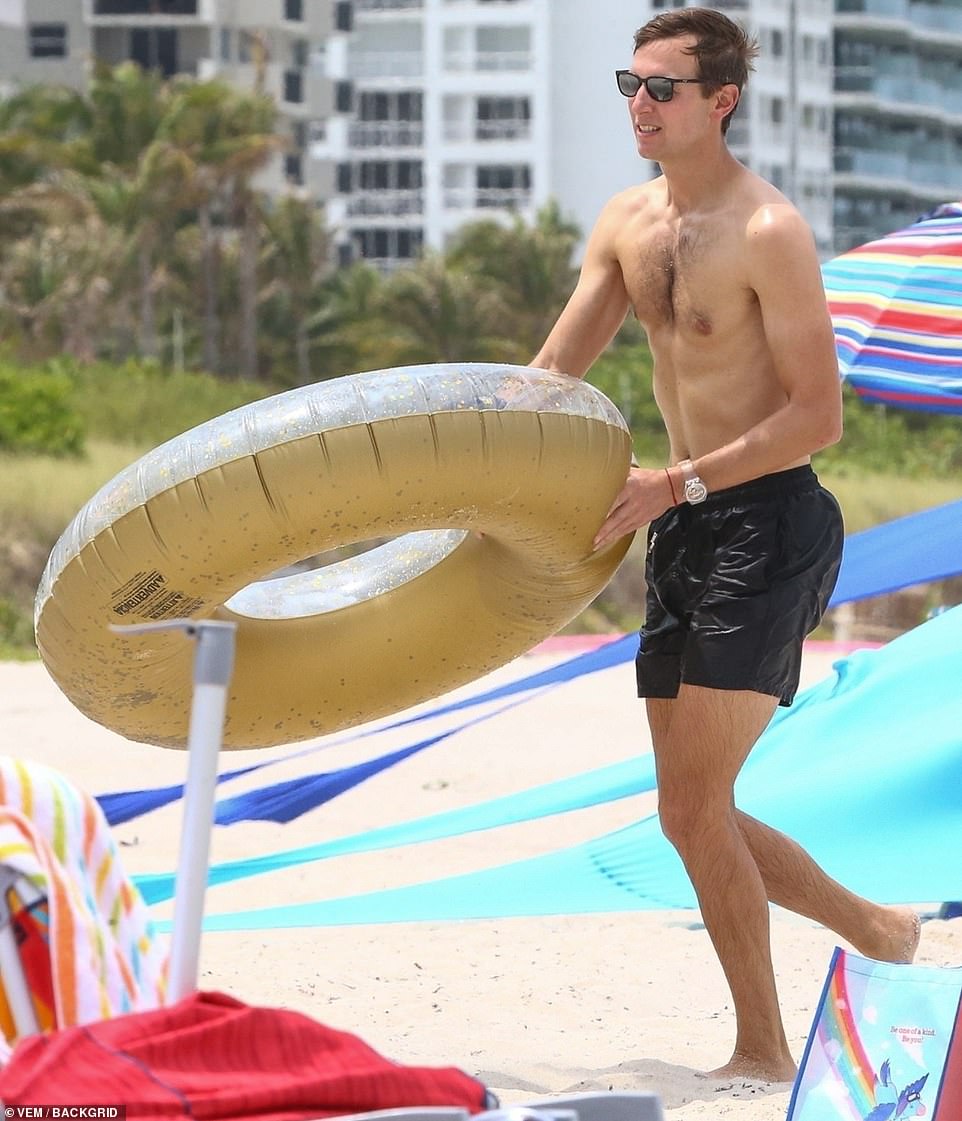 Jared donned a black Vilebrequin swim short while wearing wayfarers-lookalikes. He went back and forth between where his wife was relaxing and the water, where his two sons were playing 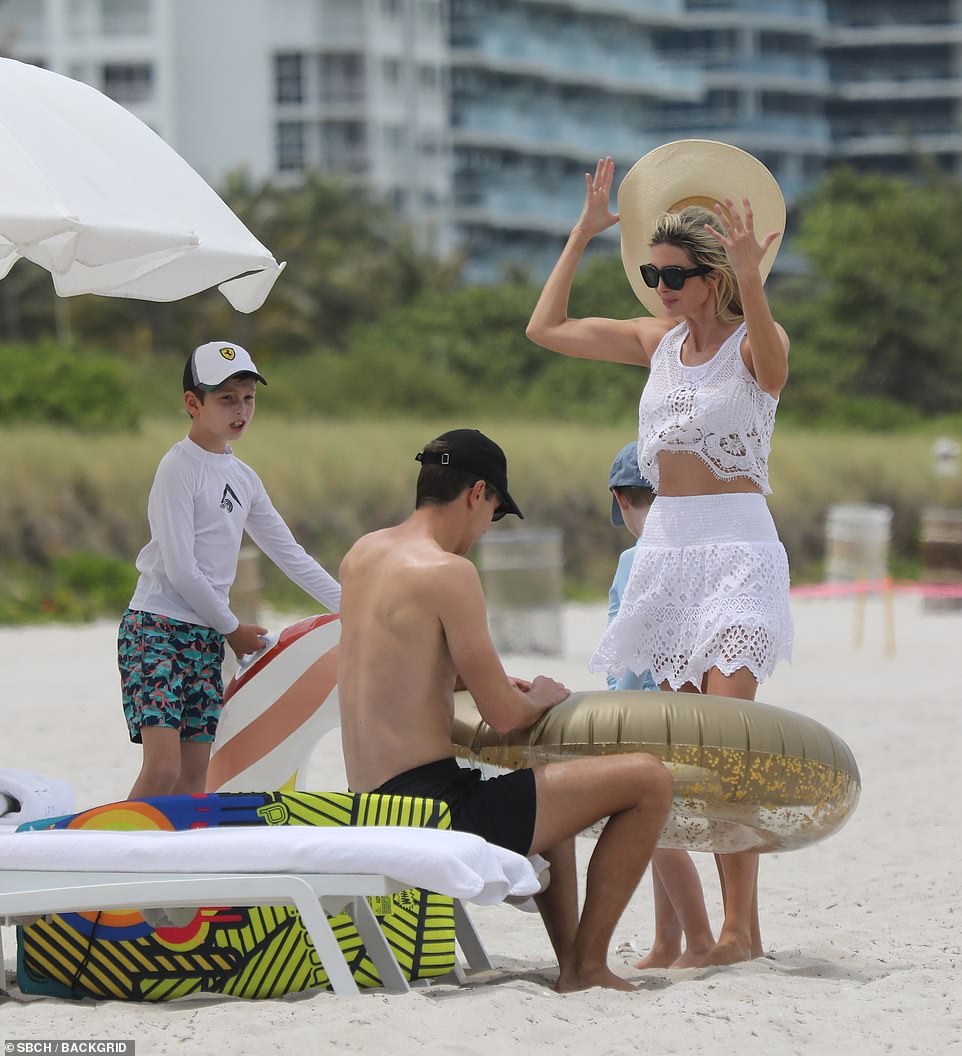 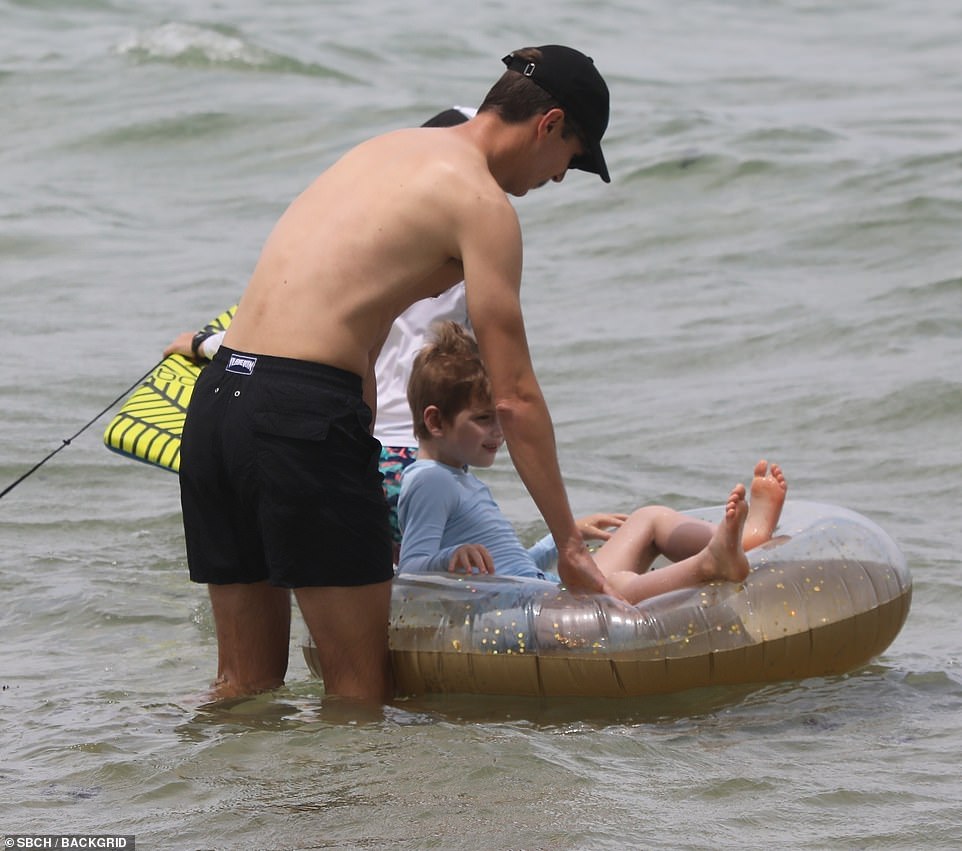 The 41-year-old, who served as an advisor under the 2016-2020 Trump Administration along with Ivanka, monitored their two sons while protecting himself from the sun by wearing a black baseball cap 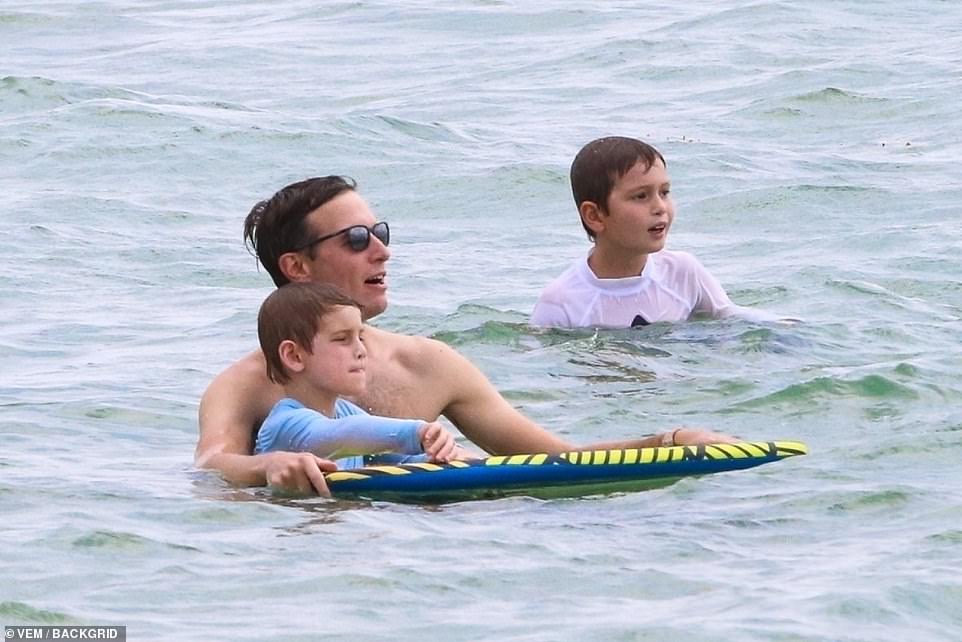 Jarod taught his two young sons, who were wearing sunscreen shirts, how to catch waves and how to steady themselves on their boogie-boards 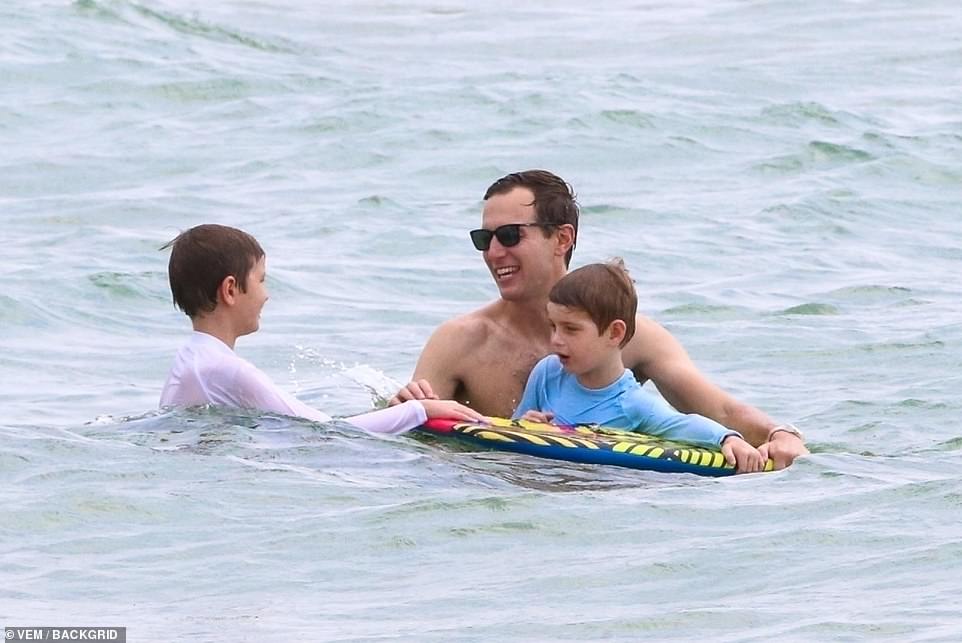 Jared looked like a doting father while having fun in the waves with his two sons in Miami, Florida over the Memorial Day weekend 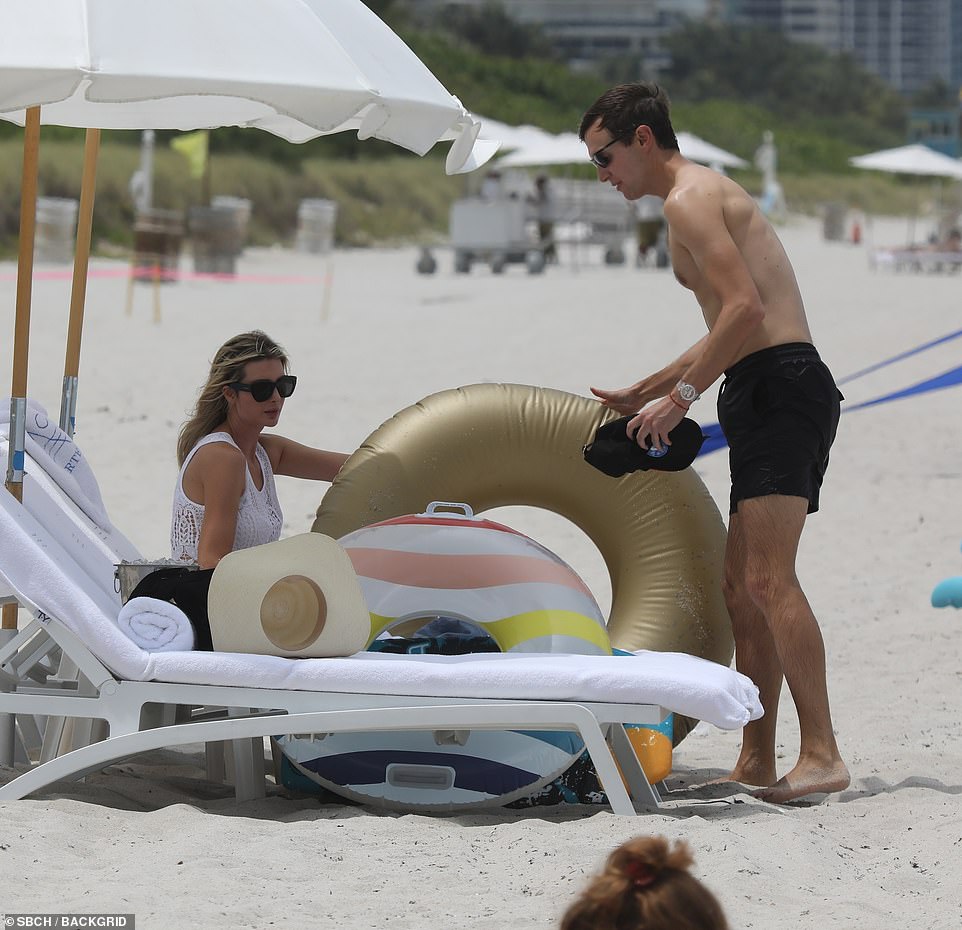 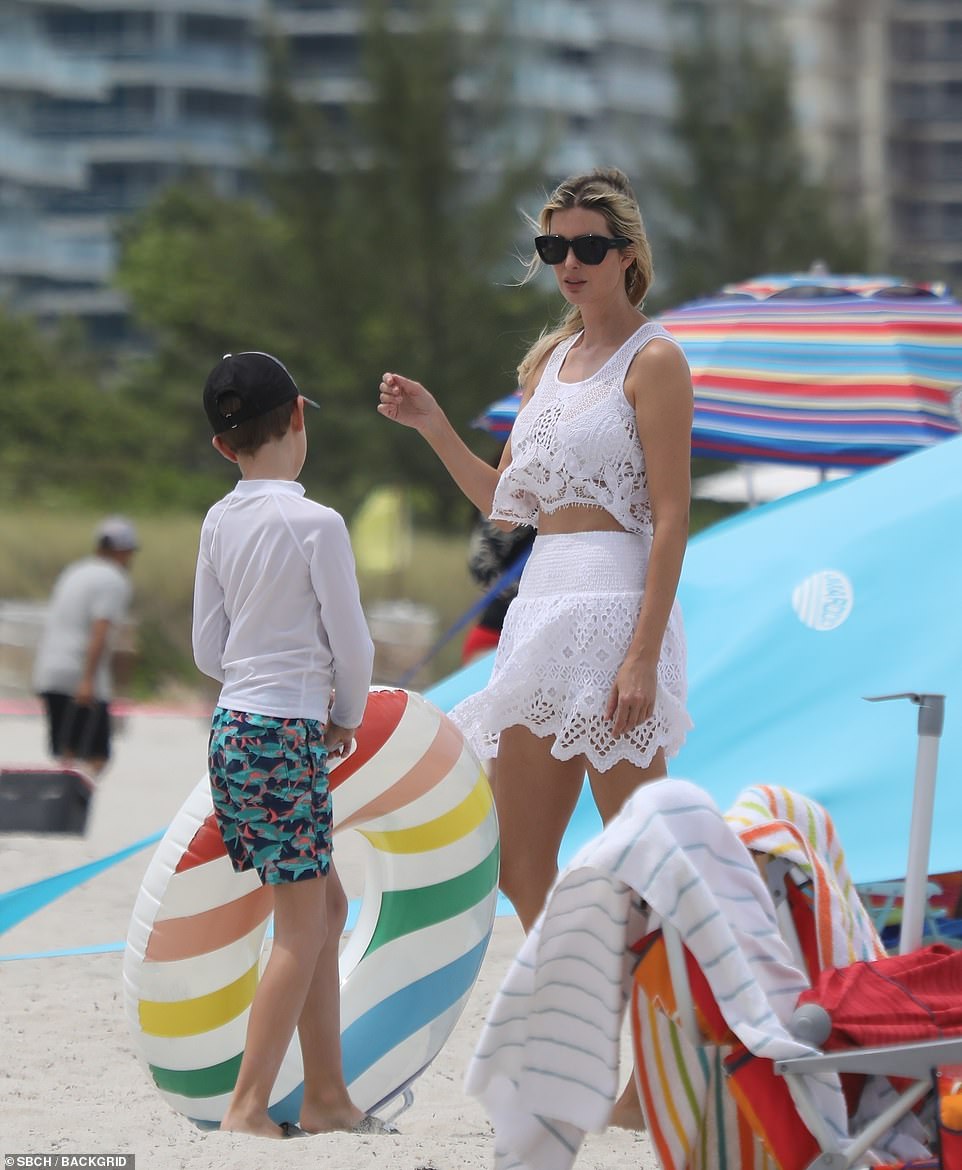 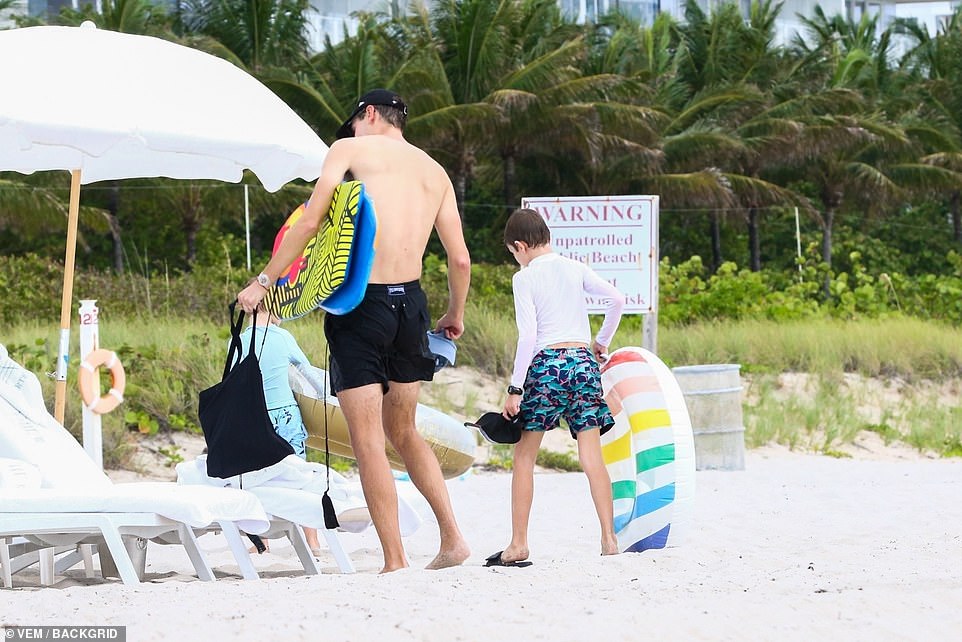 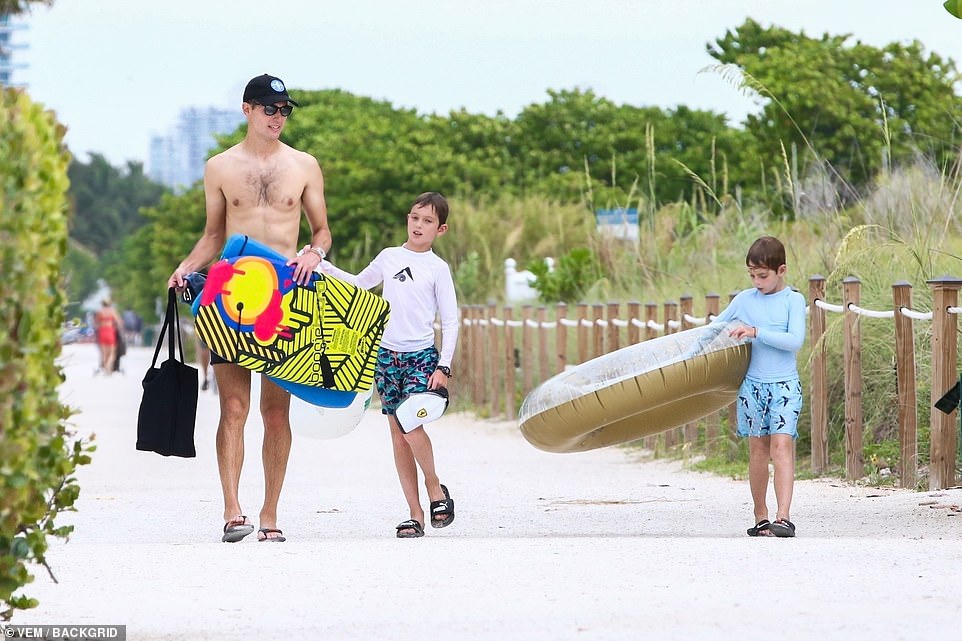 Jare and his two were seen leaving the beach. One of the two boys held his father’s hand while the other was in charge of keeping the family’s inflatable tube intact

It comes days after Ivanka and her older brother, Donald Jr, 44, were ordered to testify under oath in New York Attorney General Letitia James’ civil investigation into their family real estate empire.

The former president, Ivanka and Donald Jr. had all been fighting subpoenas from James’ office seeking depositions amid accusations the Trump Organization engaged in fraudulent financial tactics.

But judges on the appellate division of New York state’s trial court on Thursday upheld a February 17 ruling by state Supreme Court Judge Arthur Engoron that they must testify.

Ivanka and her brother were first subpoenaed by James’ office in the investigation of their father’s fraud trial last year, with prosecutors arguing the Trump Organization had knowingly misrepresented financial information in order to obtain favorable loans and other deals for over a decade.

The siblings soon challenged the order in court, claiming that any information her team gains could be unfairly used in a separate but parallel criminal probe being run by the Manhattan District Attorney’s office.

But on Thursday, Engoron ruled ‘the existence of a criminal investigation does not preclude civil discovery of related facts, at which a party may exercise the privilege against self-incrimination.’ 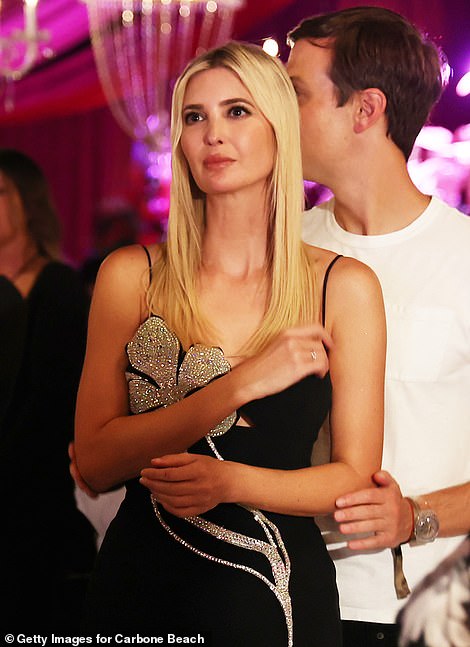 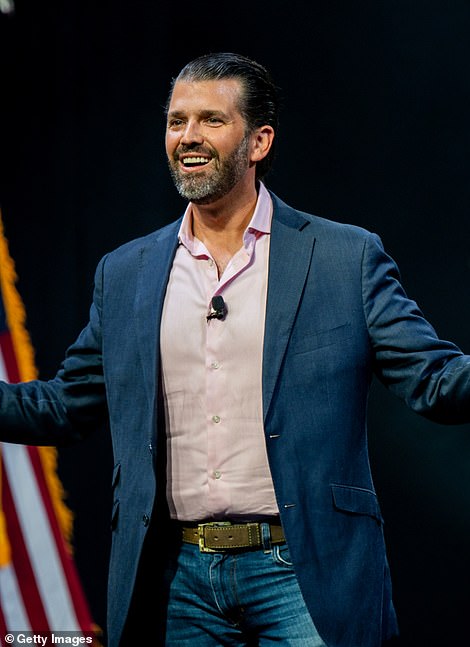 Ivanka Trump was a former Trump Organization executive before she left to serve in her father’s presidential administration. Donald Trump Jr., the oldest, is still an executive vice president there

Such a ruling means James would be able to bring a civil lawsuit against Trump using the deposition if evidence of wrongdoing was found. She could not file criminal charges due to the nature of her probe.

‘Once again, the courts have ruled that Donald Trump must comply with our lawful investigation into his financial dealings,’ James said in a statement following the decision.

‘We will continue to follow the facts of this case and ensure that no one can evade the law.’

She claimed earlier in the year to have uncovered significant evidence of Trump’s company inflating the value of their properties to appear better to banks and then lowering them to reduce tax bills, and tweeted on Thursday: ‘Our investigation will continue undeterred because no one is above the law.’

The criminal investigation, which had begun under former District Attorney Cyrus Vance, meanwhile, has lost steam in recent months after it was taken over by new DA Alvin Bragg.

Bragg said in a statement last month that the investigation is still ongoing, but gave few if any details on its progress. A grand jury impaneled for the probe expired at the end of April without any public attempts to extend it.

Trump has on multiple occasions dismissed both investigations as ‘witch hunts,’ and disparaged James herself as ‘racist’ in recent statements about her inquiry.

But in February, Engoron said that the Trump trio’s argument that testifying in James’ probe would violate his right against self-incrimination in the criminal probe completely misses the mark.

He wrote that their claim ‘overlooks the salient fact that they have an absolute right to refuse to answer questions that they claim may incriminate them.’

While the former president stepped back from running the company before coming to the White House, his son Donald Trump Jr. is still an executive vice president there.

Ivanka Trump left the company in 2017 to be an adviser in her father’s presidential administration alongside husband Jared Kushner.

His second-oldest son is also a Trump Organization executive – Eric Trump had already been forced to sit down under oath with James’ investigators. 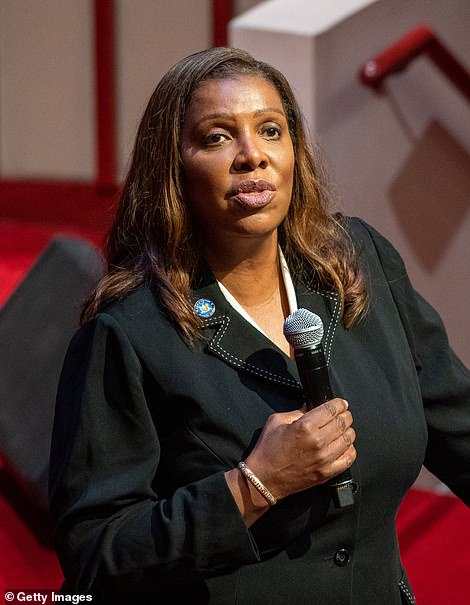 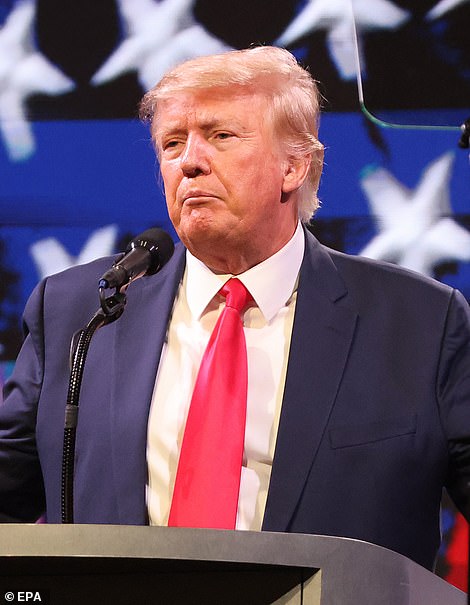 Earlier this month, Trump was forced to fork over $110,000 to James’ office as part of a deal to expunge a contempt charge over another subpoena to hand over financial documents in the inquiry.

Trump and his attorney had maintained that he did not have the records James was asking for and that he had handed over everything else, while she contended that his reasons were inadequate.

Engoron wound up siding with James, charging Trump with contempt of court and charging him $10,000 for every day the documents were not produced.

The former president has previously accused James, a Democrat, of investigating him out of political animus. But those accusations have so far not held up in court.