Ivanka Trump rocked a bold red lip and perfectly coiffed hair as she stepped out of her New York City apartment on Wednesday morning.

The 36-year-old first daughter was headed to watch her father, President Donald Trump, participate in a United Nations Security Council meeting on counter-proliferation.

All dolled up: Ivanka Trump looked glamorous as she stepped out of her New York City apartment on Wednesday morning

Greeting: The 36-year-old waved at the photographers waiting outside of her building

The form-fitting frock, which hits just below the knees, features three-quarter sleeves and a button detail at the shoulder.

Although she is known for sporting a more neutral lip, the senior adviser added a pop of color to her outfit with her bright red lipstick.

Keeping with her glamorous look, her glossy blonde hair was parted to the side and loosely curled around her face.

Despite the dreary New York City weather, Ivanka flashed a bright smile and waved to the photographers who were waiting outside her Park Avenue apartment.

The senior adviser made the quick jaunt from the door to the black SUV that was waiting at the curb for her before heading to the UN headquarters.

Ivanka’s husband, Jared Kushner, and three children are in the Big Apple with her, but she was by herself when she left the building. 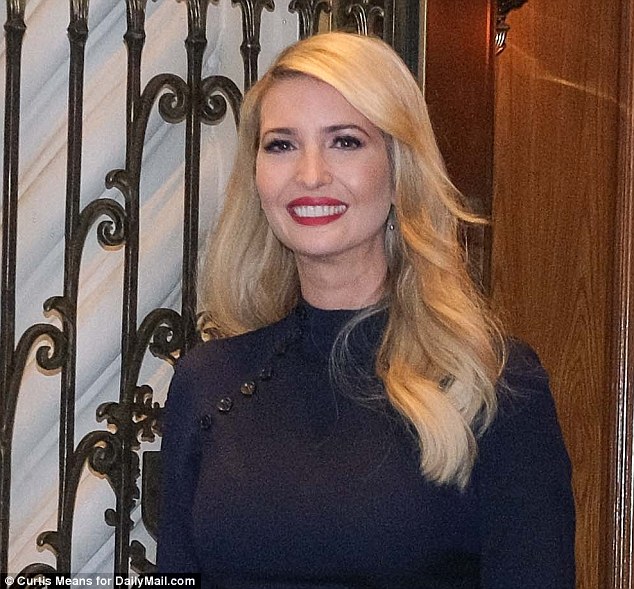 Eye-catching: Ivanka added a pop of color to her look by sporting a bright red lip 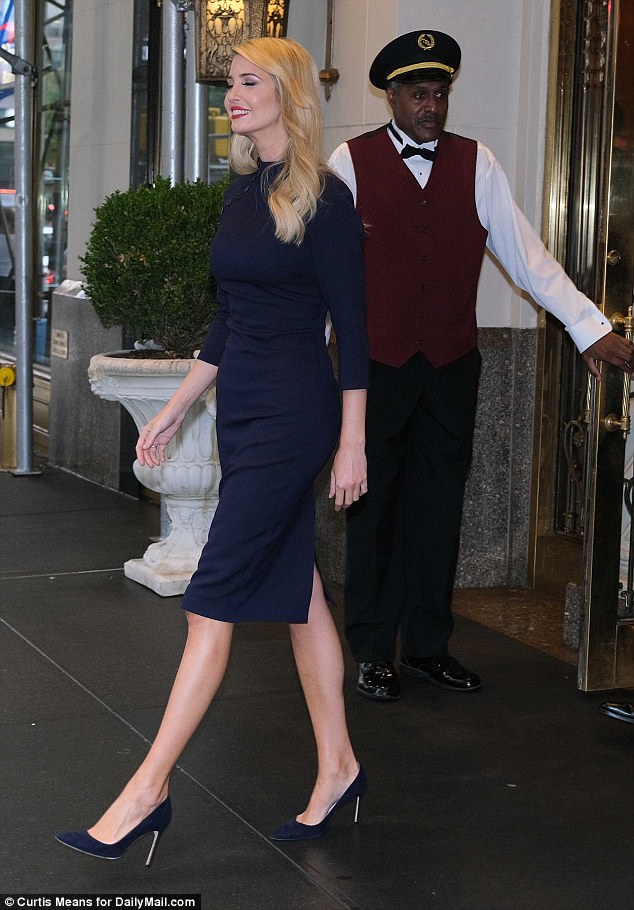 Good vibes: Despite the dreary New York City weather, Ivanka had a bright smile on her face as she left her Park Avenue apartment

Jared, 37, was seen stepping out of the apartment building about an hour later, wearing a navy suit and a dark tie. The senior adviser held nothing but file folders under his arm as he headed out for the day.

Ivanka was later photographed holding an earpiece to her head as she listened to the briefing in a red chair.

Although she seemed to be in a cheerful mood when she left her home earlier in the day, Ivanka had a somber look on her face.

During the meeting, her father claimed China has been meddling in the November election in the United States.

He’s offering few details, but said: ‘Regrettably, we found that China has been attempting to interfere in our upcoming 2018 election.’

U.S. intelligence officials have said previously that other nations could opt to try and copy Russia’s playbook of meddling in the 2016 U.S. presidential election. But Trump’s comments Wednesday seemed to confirm that China is actively interfering now. 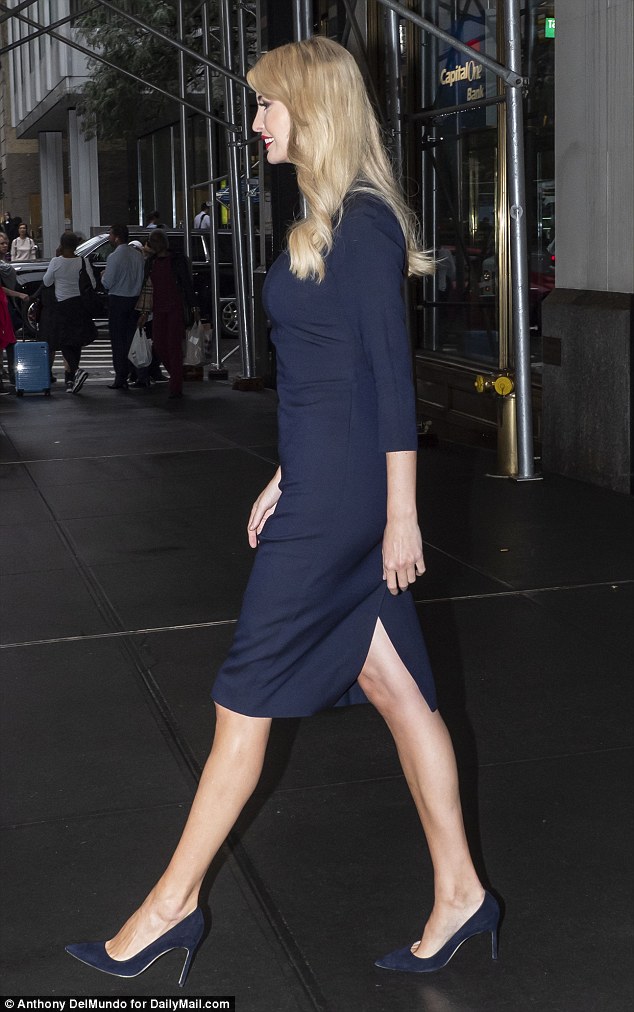 Details: Ivanka’s form-fitting frock, which hits just below the knees, features three-quarter sleeves and a slit in the back 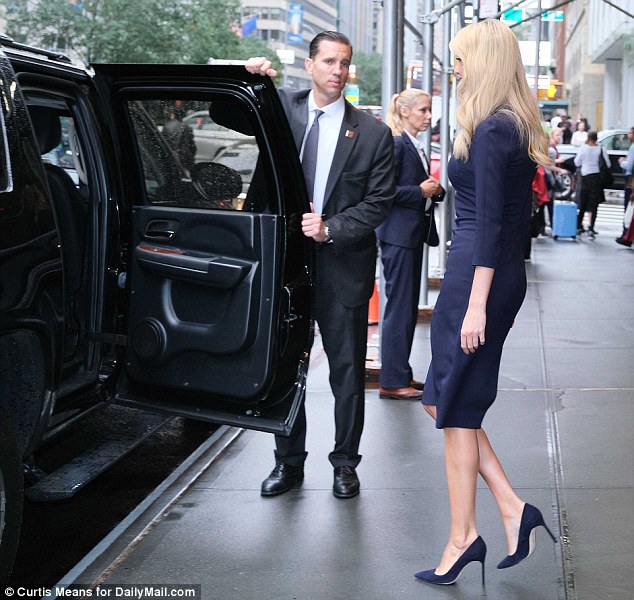 Ready to go: Ivanka quickly made her way to the black SUV that was waiting for her at the curb 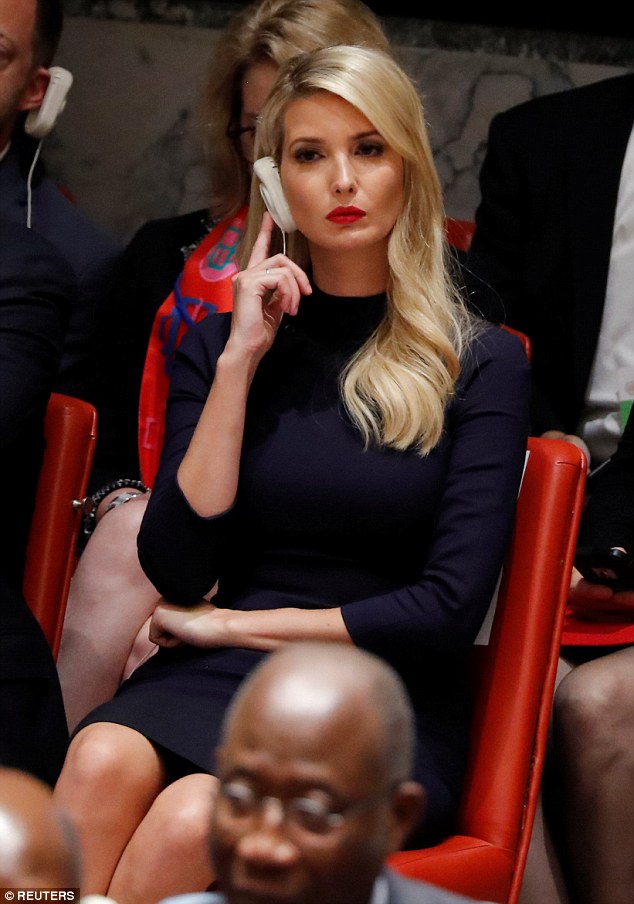 Focused: The senior adviser was headed to UN headquarters for a UN Security Council briefing on counter-proliferation 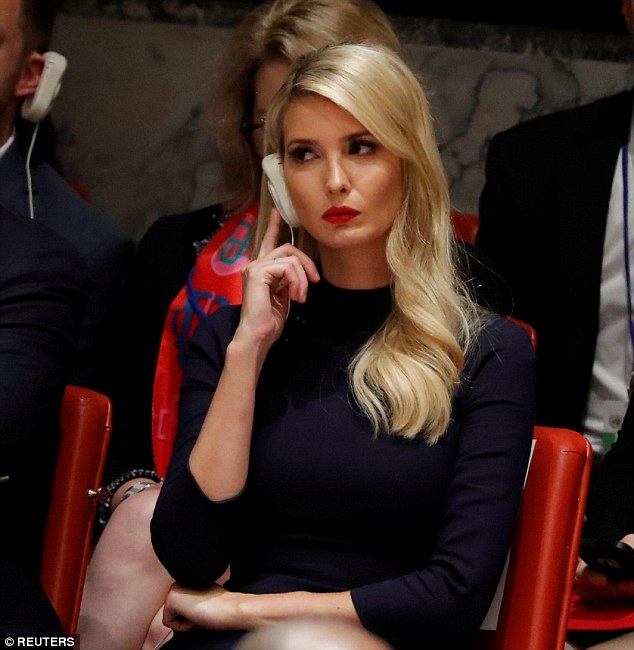 First daughter duties: Ivanka was photographed using an earpiece to listen to the briefing 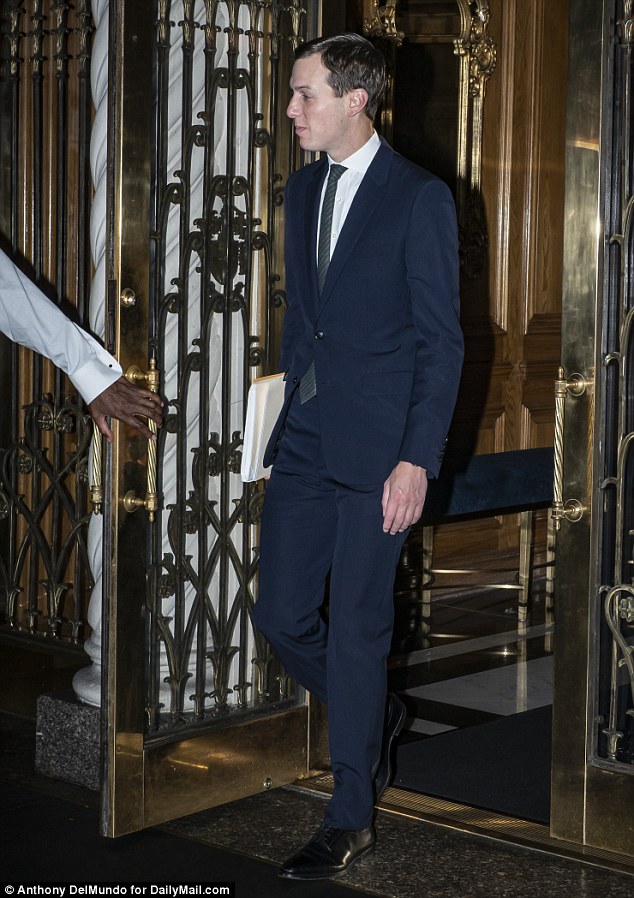 On the go: Ivanka’s husband, Jared Kushner, was seen stepping out about an hour later, wearing a navy suit and a dark tie

‘They do not want me or us to win because I am the first president ever to challenge China on trade,’ he declared. ‘

And we are winning on trade. We are winning at every level. We don’t want them to meddle or interfere in our upcoming election.’

It has been a busy week for Ivanka, who made an appearance at the Women Entrepreneurs Finance Initiative in New York City on Tuesday after a busy day supporting her father at the UN general assembly.

The first daughter was pictured alongside other entrepreneurs for the initiative that primarily focused on better financing for female entrepreneurs in developing countries.

The mother-of-three chatted with Queen Máxima of the Netherlands and kissed the royal on the cheek.

She dressed to impress for the event and donned a $2,195 floral-checked wool-blend blazer and a matching $895 pencil skirt with a front slit by Altuzarra. 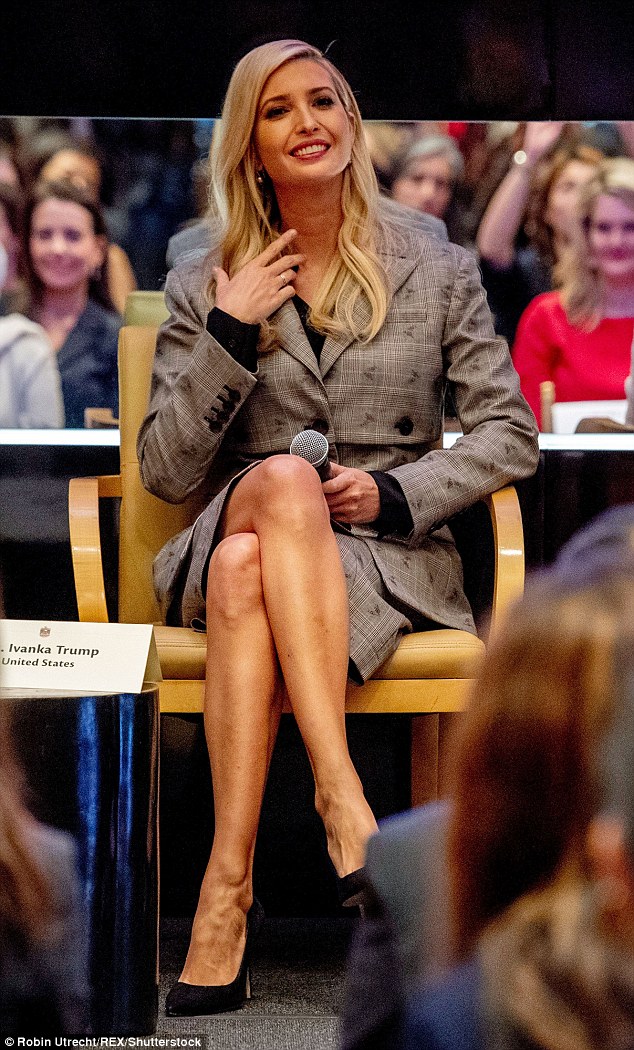 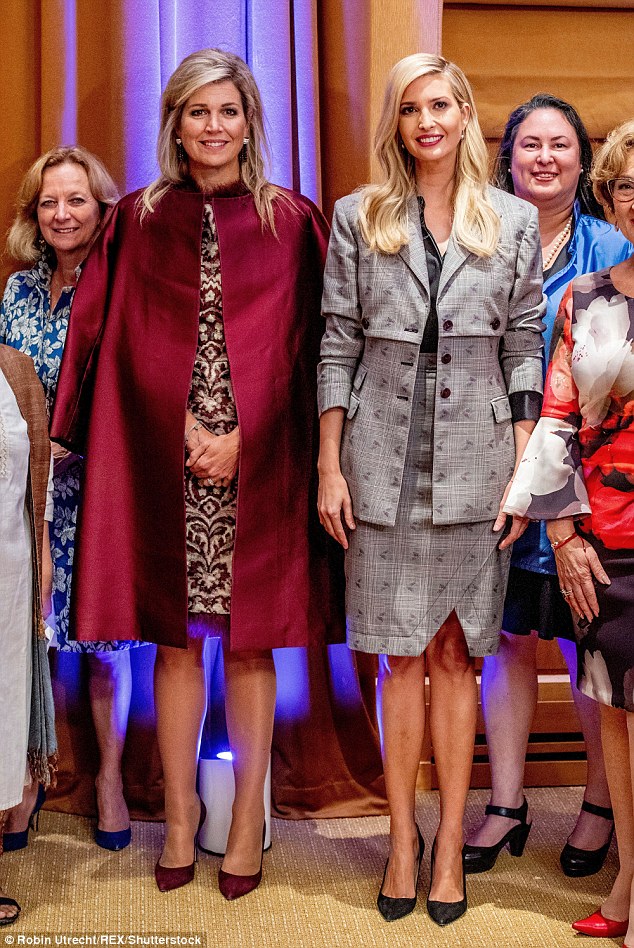 Style: The mom-of-three dressed to impress for the event and donned a $2,195 floral-checked wool-blend blazer and a matching $895 pencil skirt with a front slit by Altuzarra 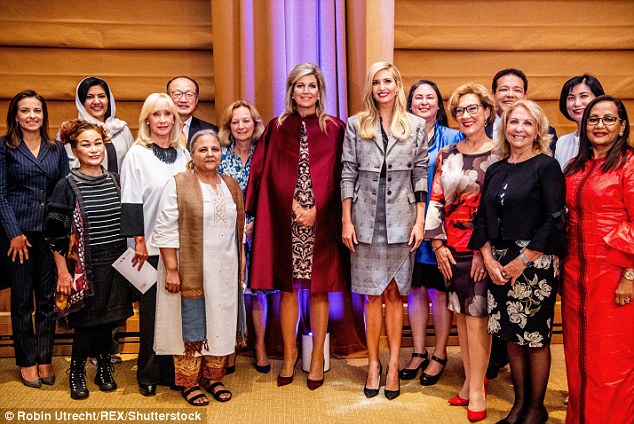 All smiles: vanka and Queen Maxima posted for photos with guests at the event 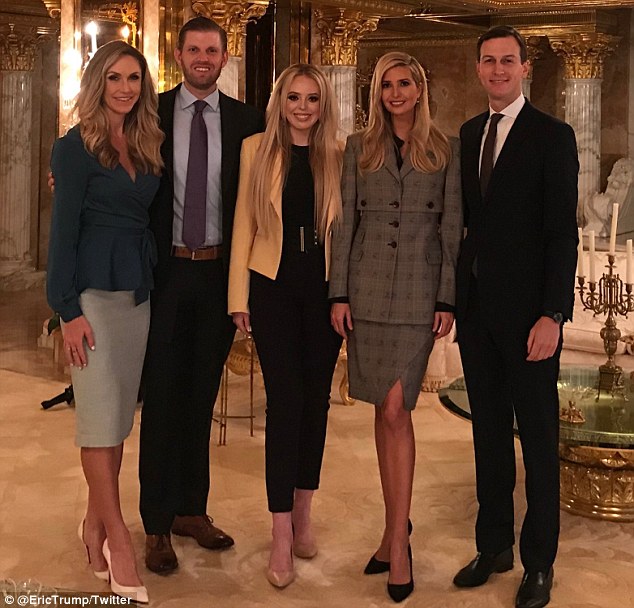 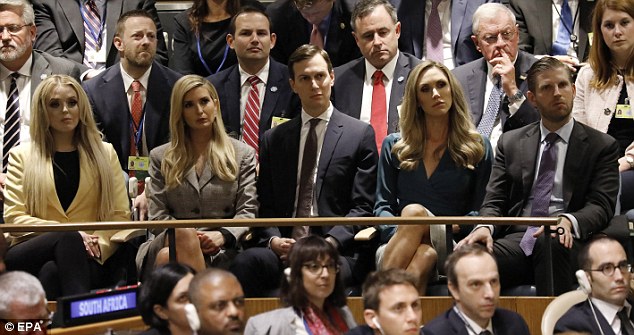 All together: The siblings were seen sitting together at the UN headquarters in New York during Trump’s speech

To match the black buttons on her gray skirt suit, Ivanka wore a pair of classic black pumps. Her long blonde hair was side parted and styled in loose waves.

Donald Trump’s children reunited earlier in the day to watch him address the UN General Assembly for the second time since he took office.

Ivanka, Eric Trump, 34, and Tiffany Trump, 24, sat together at the United Nations Headquarters during their father’s speech. Their older brother, Donald Trump Jr., 40, was noticeably absent.

The three siblings, who were also missing their 12-year-old brother, Barron Trump, sat together, while First Lady Melania was in the front row to watch her husband address his fellow world leaders.

Ivanka and Eric were joined by their respective spouses Jared and Lara Trump, who were seated next to them in the aisle.

The first daughter sported the same chic attire for the assembly.

Eric took to Twitter before their father’s speech to share a photo of himself posed with his wife, sisters, and brother-in-law, writing: ‘United Nations Time #USA.’