Ivanka Trump wears a $2,300 dress as she goes to synagogue with her children

Ivanka Trump donned a 1940s-inspired look complete with a fascinator while celebrating the Jewish holiday of Shemini Atzeret with her three children on Monday.

Taking advantage of the unusually warm fall weather, the first daughter walked to the American Friends of Lubavitch synagogue, while her children, Arabella, seven, Joseph, four, and Theodore, two, happily rode their scooters.

Secret Service agents kept a watchful eye as Ivanka, 36, guided her children down sidewalks and across streets by herself, as her husband, Jared Kushner, was noticeably absent from the family outing.

Mom on duty: Ivanka Trump was seen walking alongside her three children, Arabella, seven, Joseph, four, and Theodore, two, as they road their scooters to synagogue on Monday 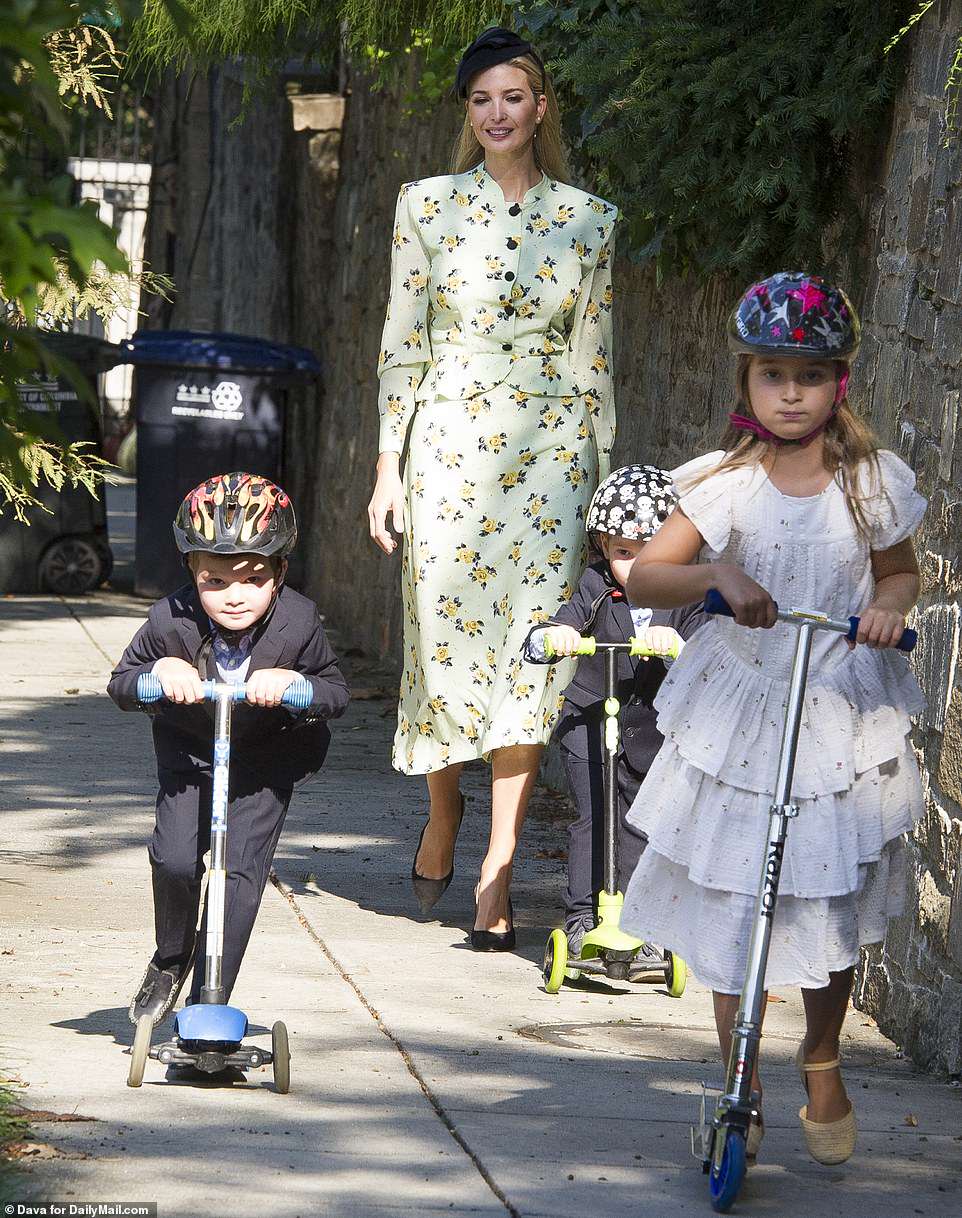 Holy day: The family was headed to the American Friends of Lubavitch synagogue to celebrate the Jewish holiday of Shemini Atzeret 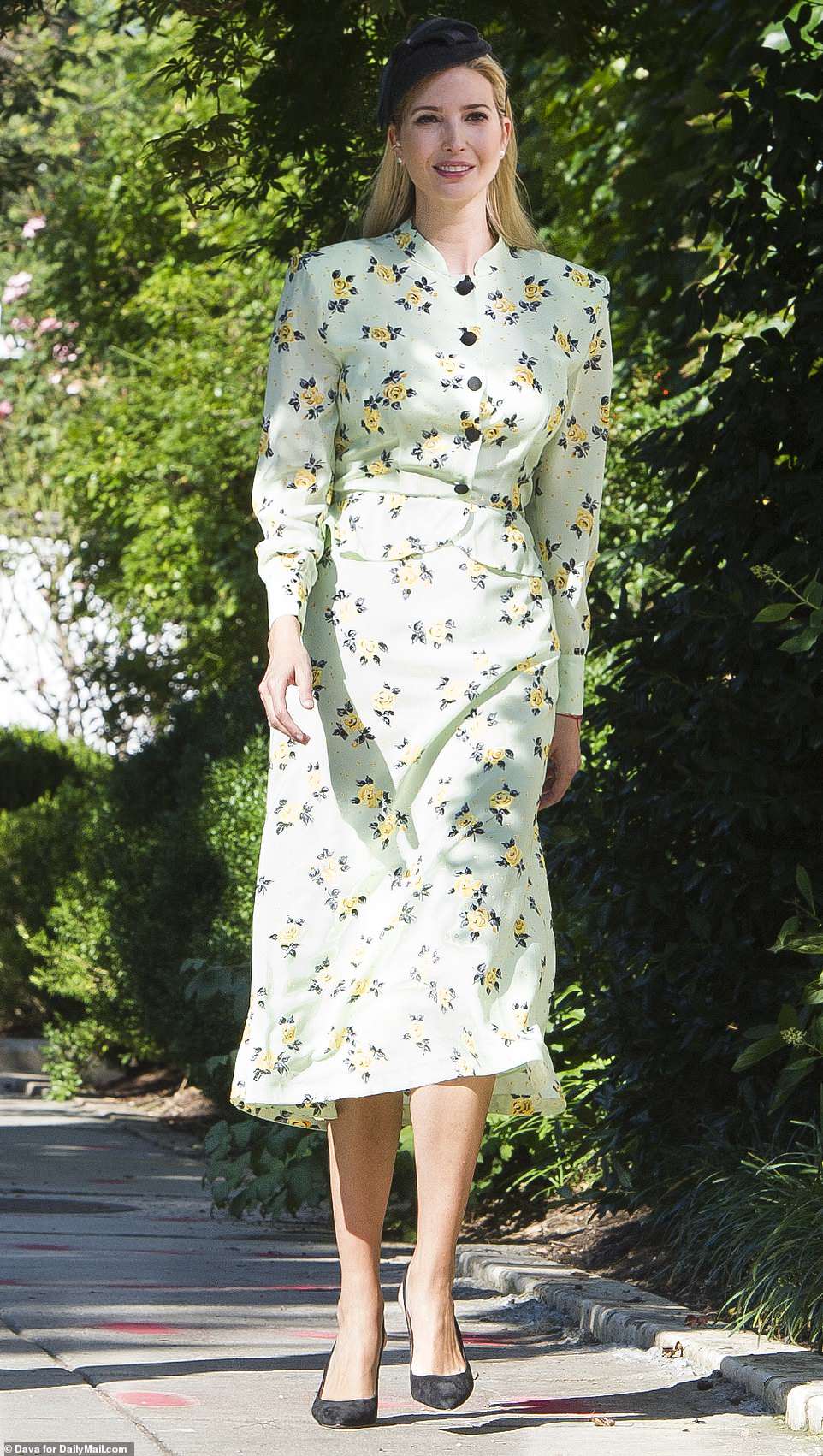 The mother-of-three looked like she was from another decade in a $2,281 Alessandra Rich dress, which features a rose print, black buttons, and a peplum top.

Keeping with the religion’s strict dress code, she topped off her vintage-inspired ensemble with a black fascinator that covered her head, though didn’t do so while celebrating the holiday last year.

Ivanka wore her long blonde hair loose around her shoulders, but the headband on her fascinator kept her locks off of her face.

Her black slingback heels matched the buttons on her dress, and she added a modern spin to her outfit by donning a pair of trendy ear jackets instead of her normal stud earrings.

She also wore a red string around her left wrist and her diamond engagement ring. 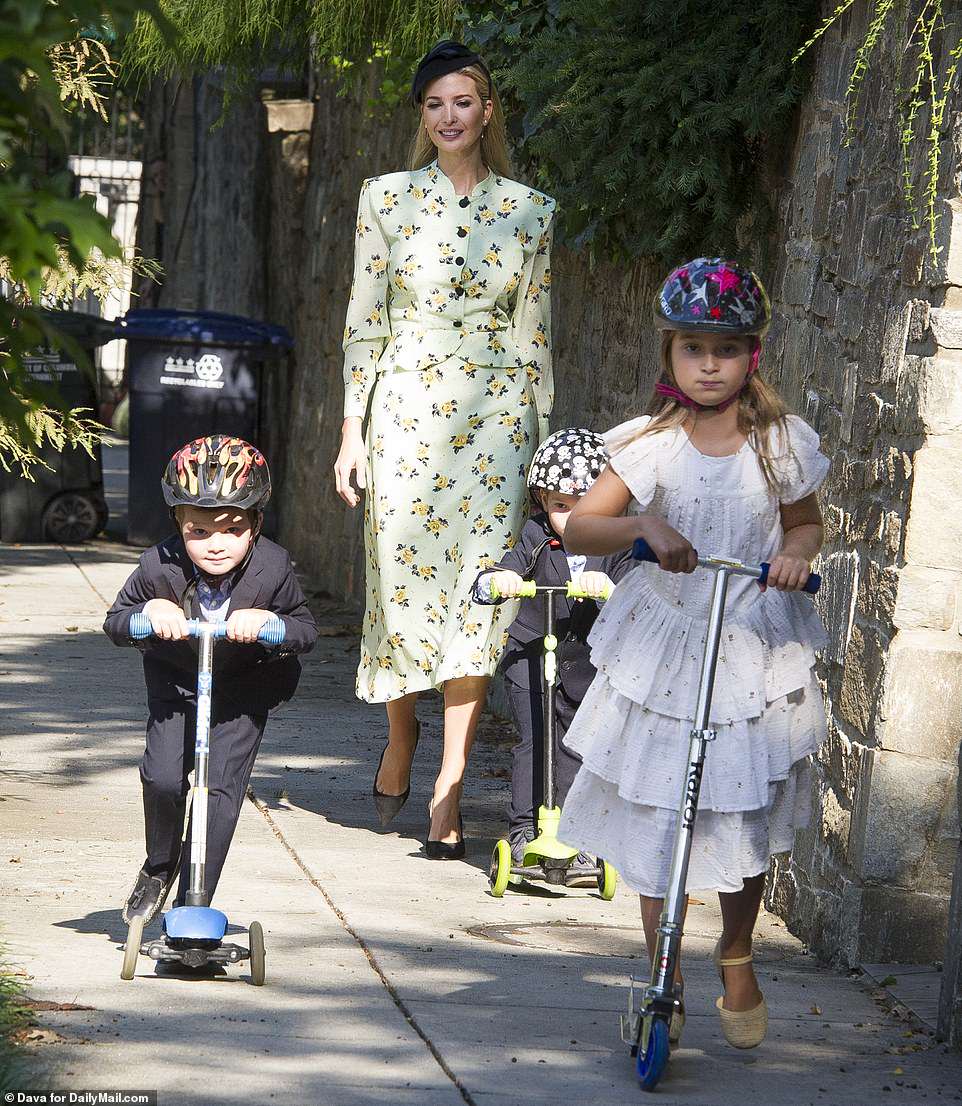 On guard: The first daughter was all smiles as she kept a watchful eye on her three children during the walk 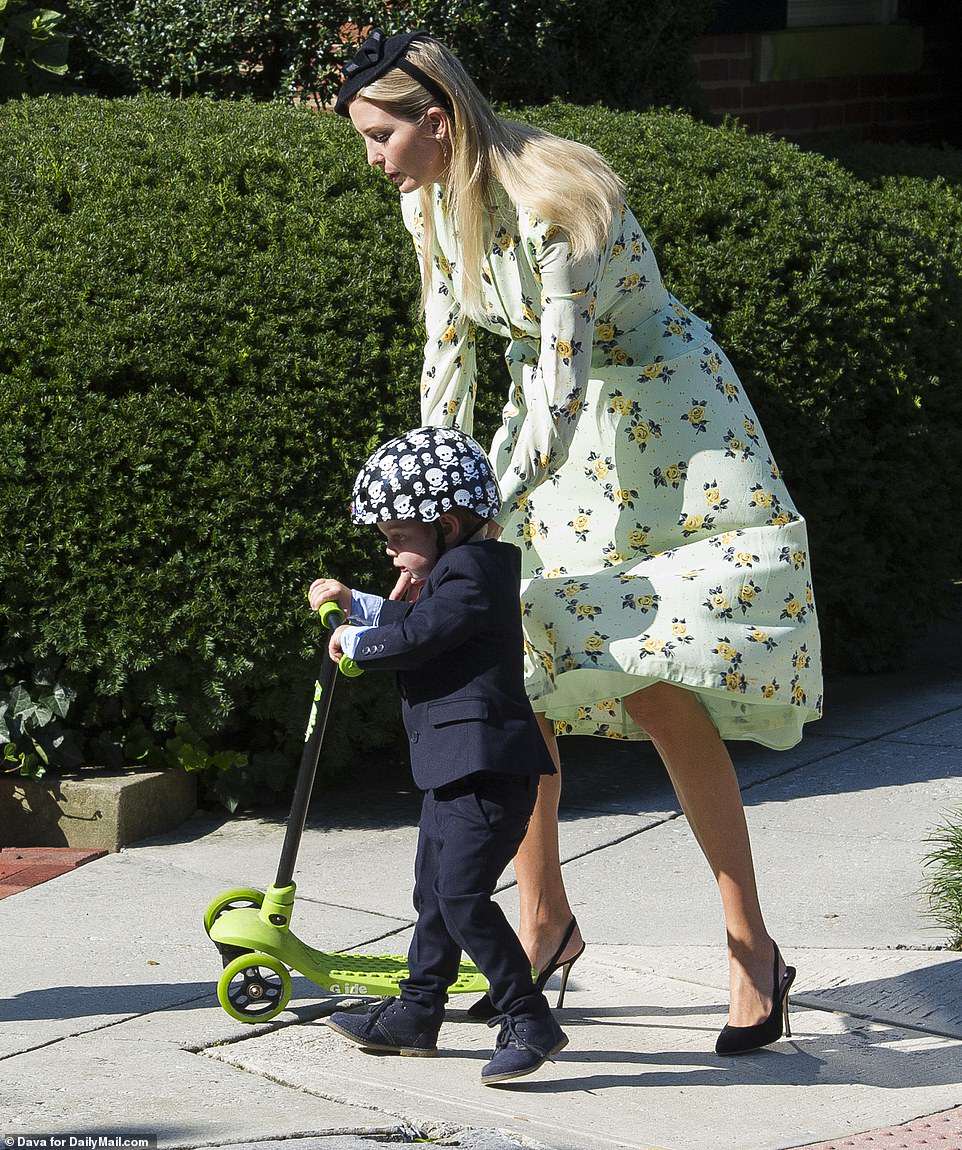 Mom’s got this: At one point, Ivanka stopped to help little Theodore with his toddler-friendly scooter, which has two wheels in the front 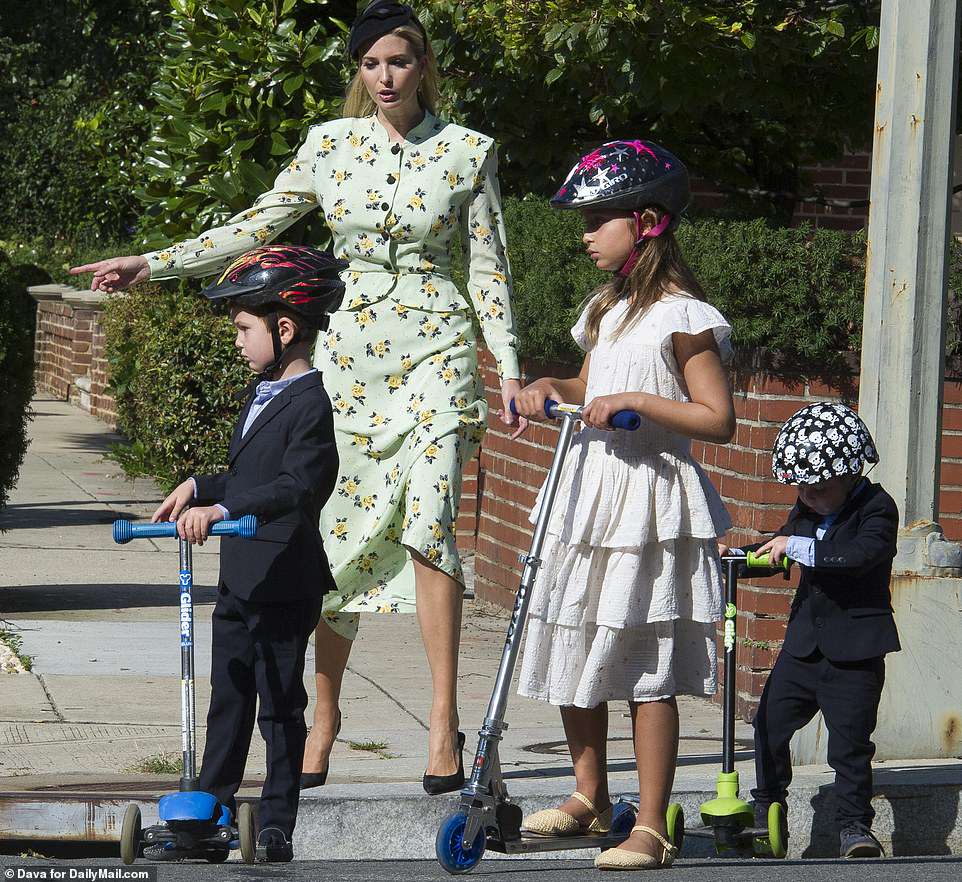 Safety first: All three children donned helmets and waited for their mom before crossing the street 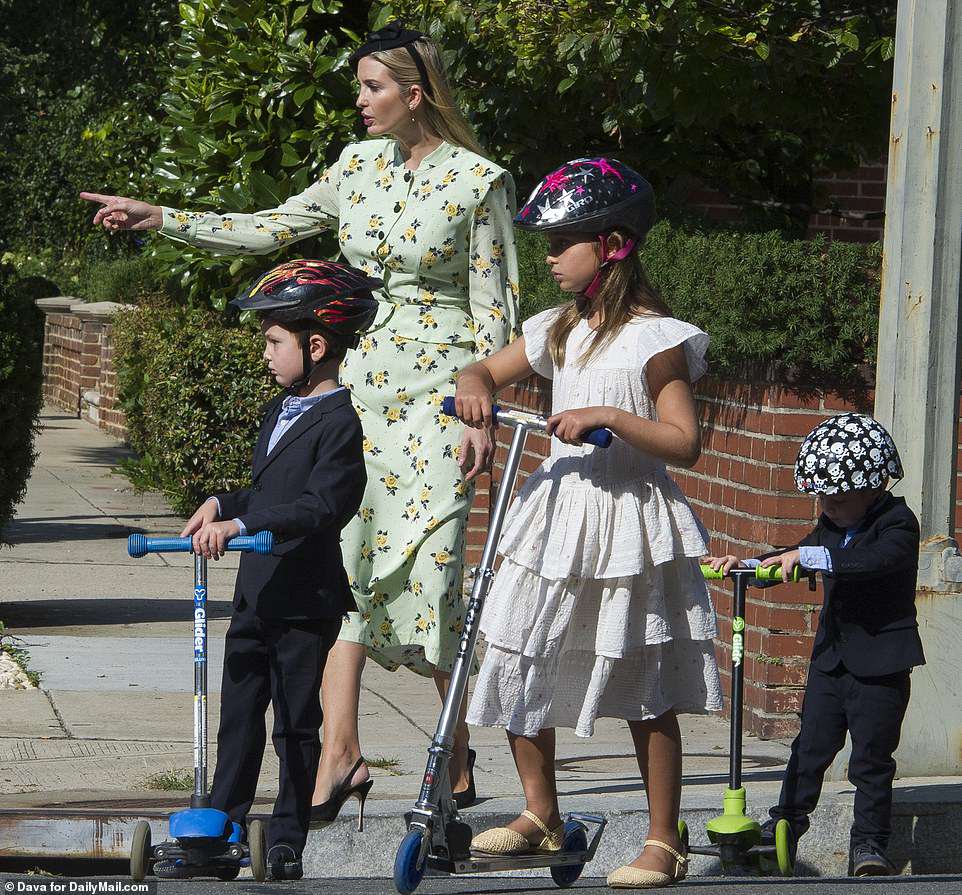 All ears: Ivanka pointed ahead while helping her children cross the street on their scooters

Though she hasn’t spoken about the purpose of the string, it does bear a resemblance to the type of red string that Kabbalah practitioners wear to ward off the ‘evil eye.’

Ivanka’s children, meanwhile, were just as dressed up for their trip to the synagogue.

Arabella sported a white dress with a tiered ruffled skirt, while her little brothers looked like their dad in matching navy suits and light blue button-down shirts.

Keeping their safety in mind, all three children had on helmets during their short jaunt to the local synagogue.

The family was photographed near their home, which is located in the upscale Kalorama neighborhood of Washington, D.C. 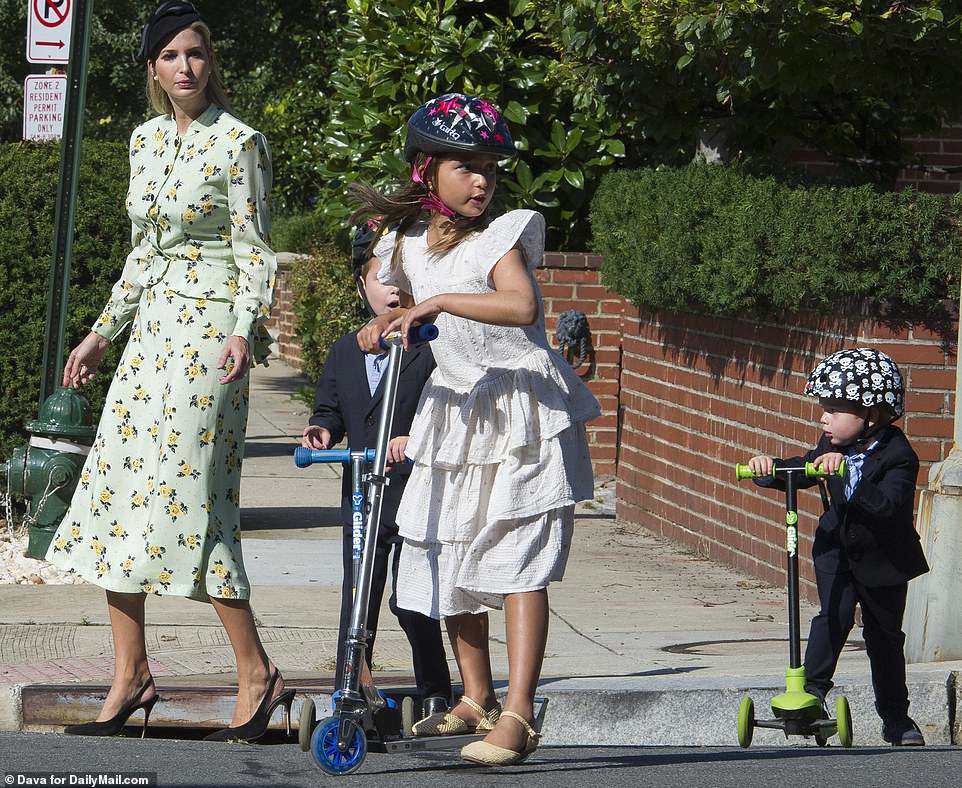 All dressed up: While her brothers had on suits, Arabella sported a white dress with a tiered ruffled skirt 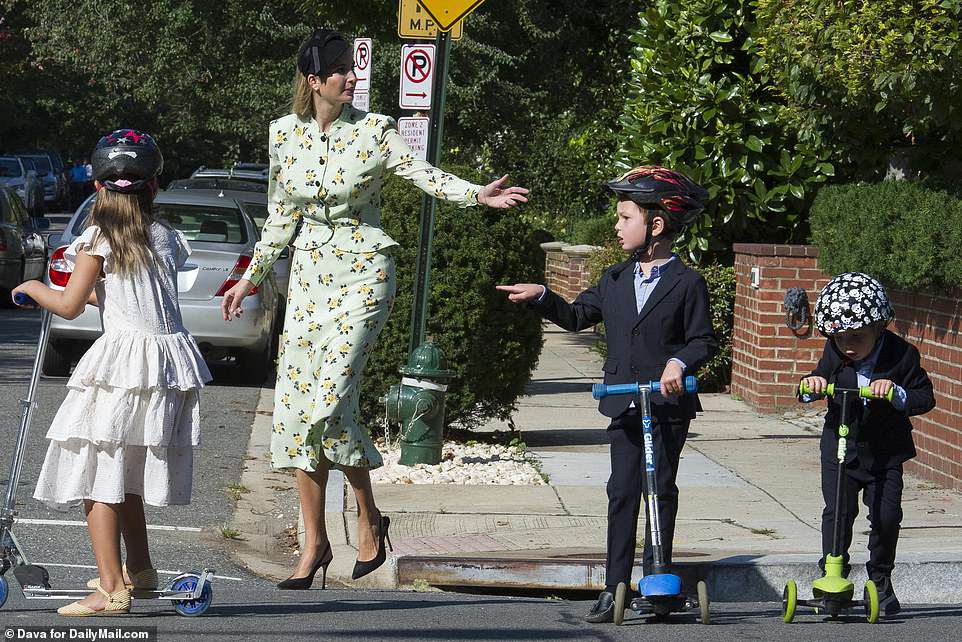 Let’s go: Ivanka gestured for Joseph and Theodore to cross the street while Arabella waited in front of her 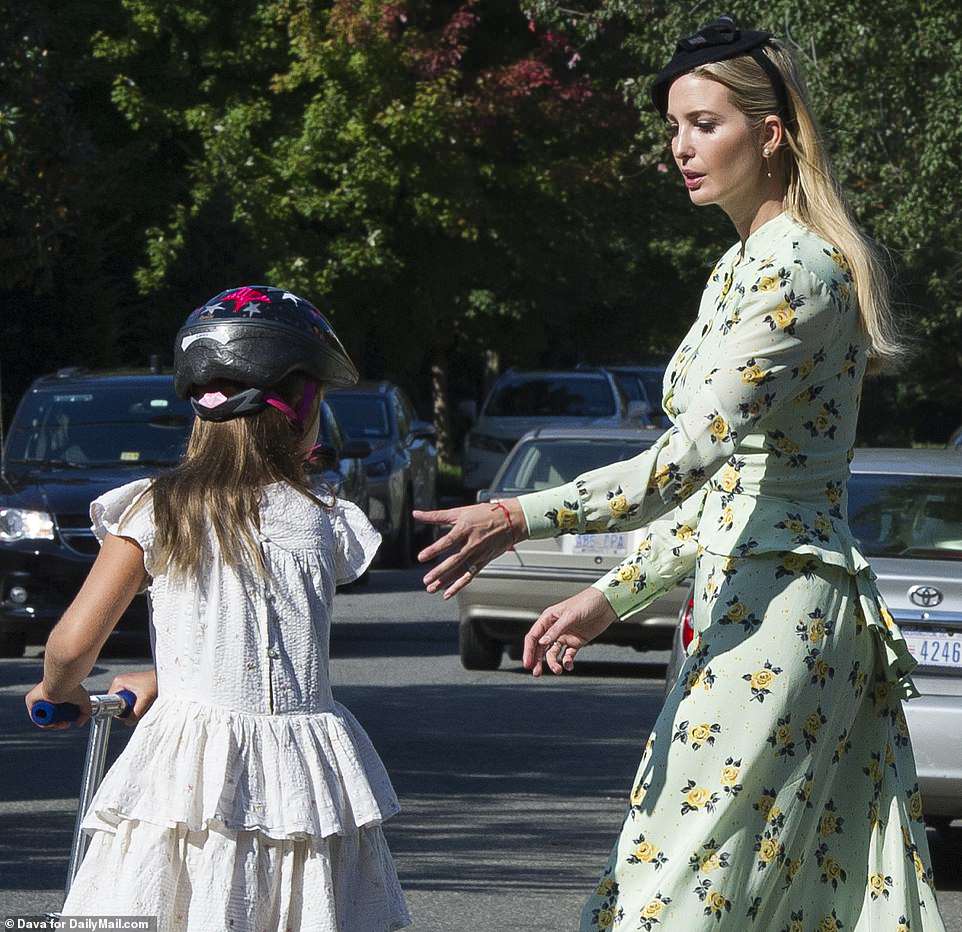 Added touches: Ivanka wore a red string around her left wrist and her diamond engagement ring. Though she hasn’t spoken about the string, it does bear a resemblance to the type of red string that Kabbalah practitioners wear to ward off the ‘evil eye’ 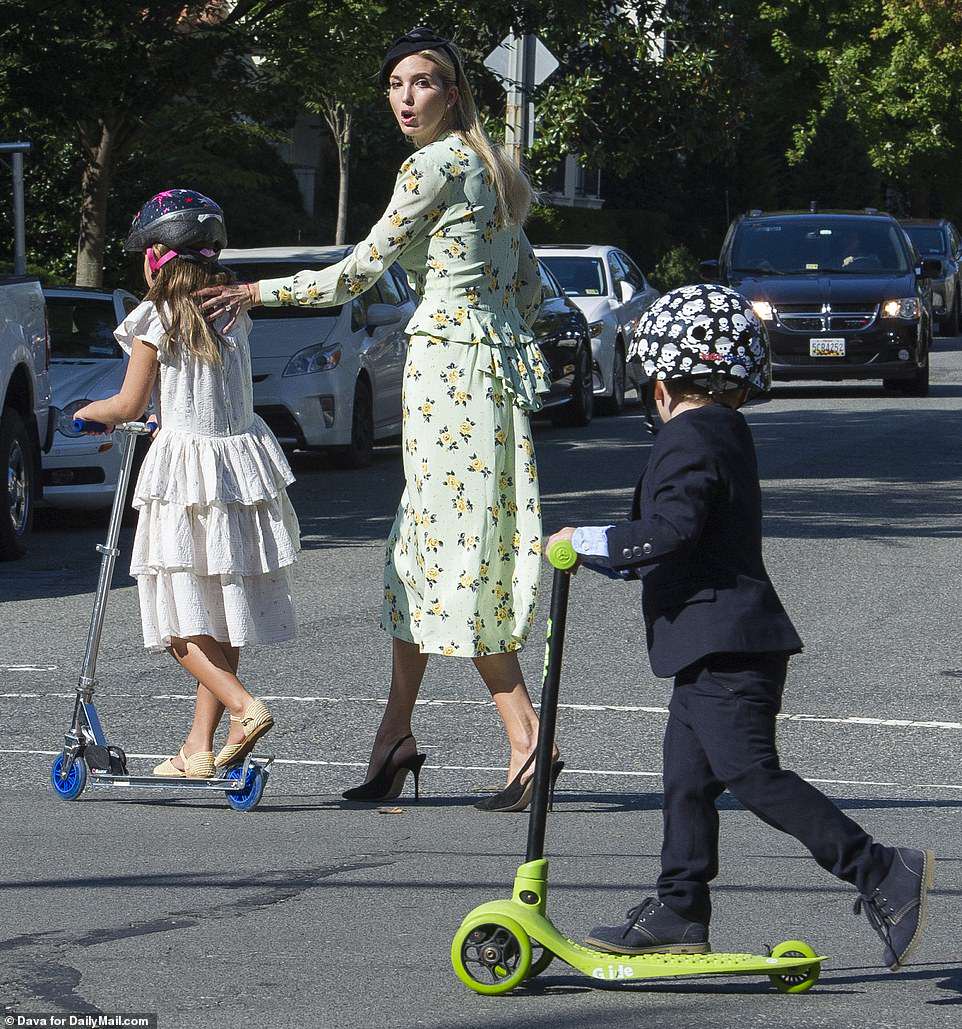 Dragging behind: While walking Arabella across the street, Ivanka turned around to check on Joseph and Theodore

Ivanka had a bright smile on her face as she watched her children gleefully scoot ahead of her on the sidewalk.

When it was time to cross a street, Ivanka waved her children along while a Secret Service agent kept a watchful eye. The mom looked a bit overwhelmed as her two sons lagged behind.

At one point, she stopped to help little Theodore with his toddler-friendly scooter, which has two wheels in the front.

Joseph was riding the same scooter as his little brother, but his was blue instead of green. Arabella, meanwhile, was zipping along on a silver two-wheeler.

Shemini Atzeret is the holiday that immediately follows the seventh day of the Jewish festival of Sukkot. It is a separate, yet connected, holy day devoted to the spiritual aspects of Sukkot.

This year, Shemini Atzeret began at sunset on September 30 and will end at sundown on October 1. 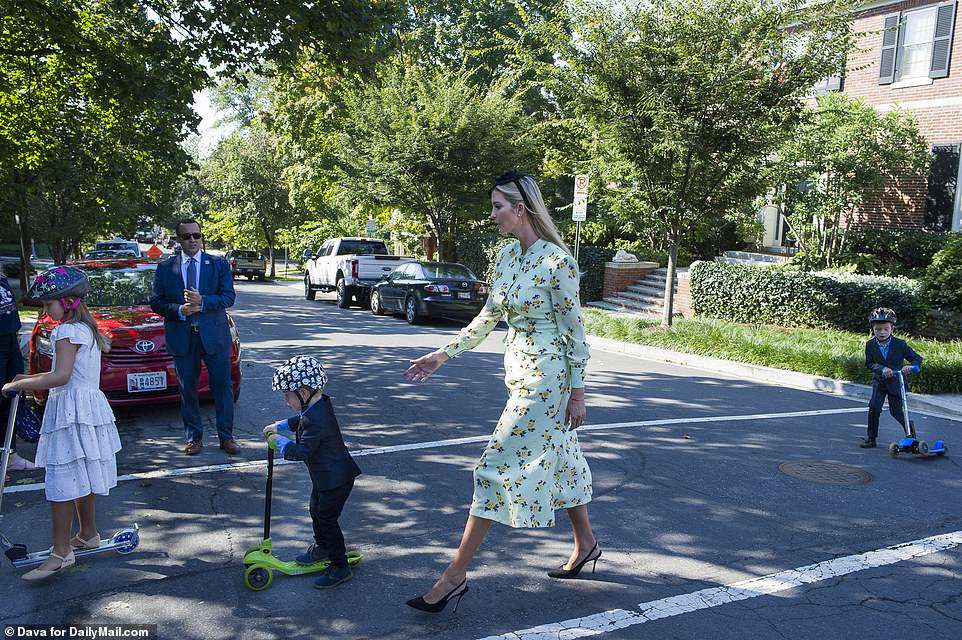 Wait for me! A Secret Service agent kept a watchful eye as little Joseph lagged behind his mom and siblings

Special circumstances: Although work is prohibited on the holiday, Ivanka’s husband, Jared Kushner, was seen leaving their home with a brief case in the morning 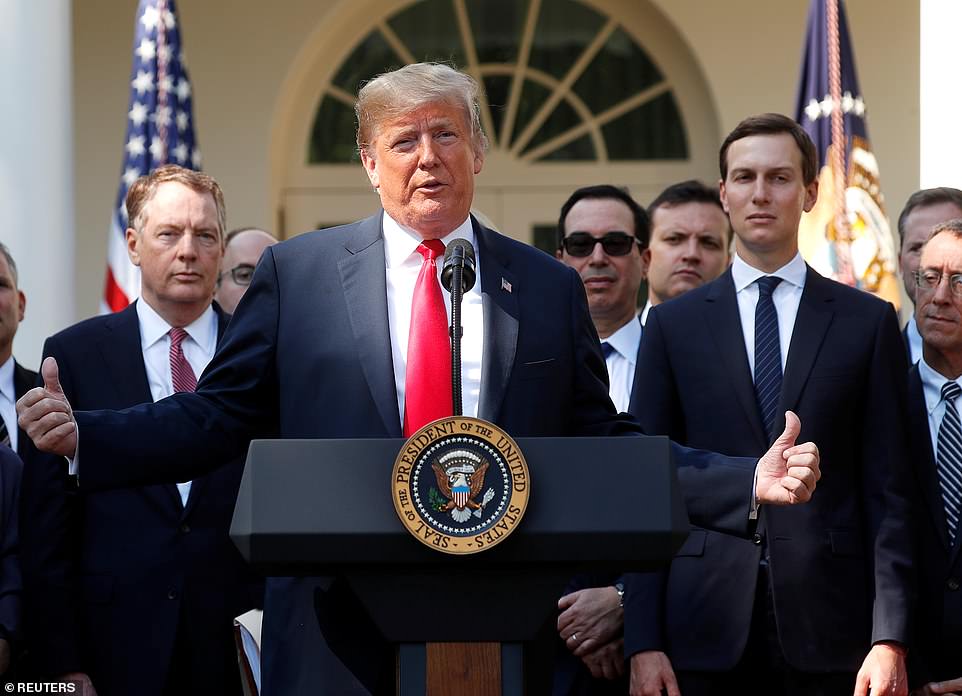 Working: Jared was on hand for President Donald Trump’s speech about the new United States-Mexico-Canada Agreement (USMCA) on Monday in the White House Rose Garden

Ivanka converted to Judaism in 2009 to marry Jared, an Orthodox Jew, and they are raising their three children Orthodox as well.

Although work is prohibited on the holiday, Jared, 37, was seen leaving his home with a briefcase in his hand on 7 a.m. on Monday morning.

Jared donned a navy blue suit over a white button-down and a navy striped tie, and, like his wife, he wore a thin red string on his left wrist.

Later in the day, he attended a news conference held by his father-in-law, President Donald Trump, in the White House Rose Garden.

The president acknowledged Jared as well as U.S. Trade Representative Robert Lighthizer while speaking about the new United States-Mexico-Canada Agreement (USMCA), which is set to replace the North America Free Trade Agreement (NAFTA).

The U.S., Canada and Mexico have been negotiating the terms of a revised NAFTA for more than a year.

The Trump administration announced a deal had been reached late Sunday night.