It is no secret that the bulk of Ivanka Trump’s merchandise comes from China. But just which Chinese companies manufacture and export her handbags, shoes and clothes is more secret than ever.

In the months since she took her White House role, public information about the companies importing Ivanka Trump goods to the US has become harder to find.

Information that once routinely appeared in private trade tracking data has vanished, leaving the identities of companies involved in 90 per cent of shipments unknown. Even less is known about her manufacturers. 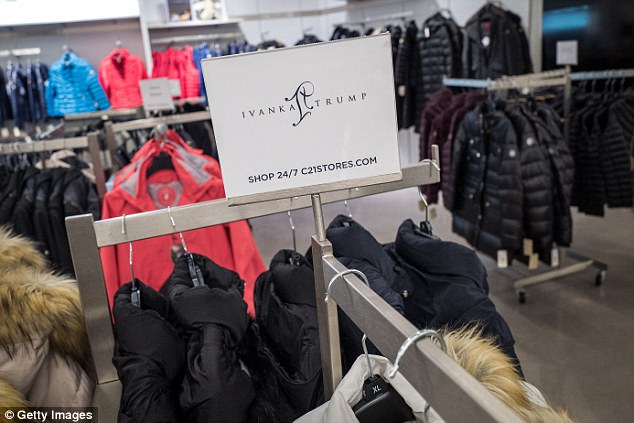 Trump’s brand, which is still owned by the first daughter and presidential adviser, declined to disclose the information.

The deepening secrecy means it’s unclear who Ivanka Trump’s company is doing business with in China, even as she and her husband, Jared Kushner, have emerged as important conduits for top Chinese officials in Washington.

Such questions are especially pronounced in China, where state-owned and state-subsidized companies dominate large swaths of commercial activity.

‘There should be more transparency, but right now we do not have the legal mechanism to enforce transparency unless Congress requests information through a subpoena,’ said Richard Painter, who served as chief White House ethics lawyer for George W. Bush, and is part of a lawsuit against President Donald Trump for alleged constitutional violations. 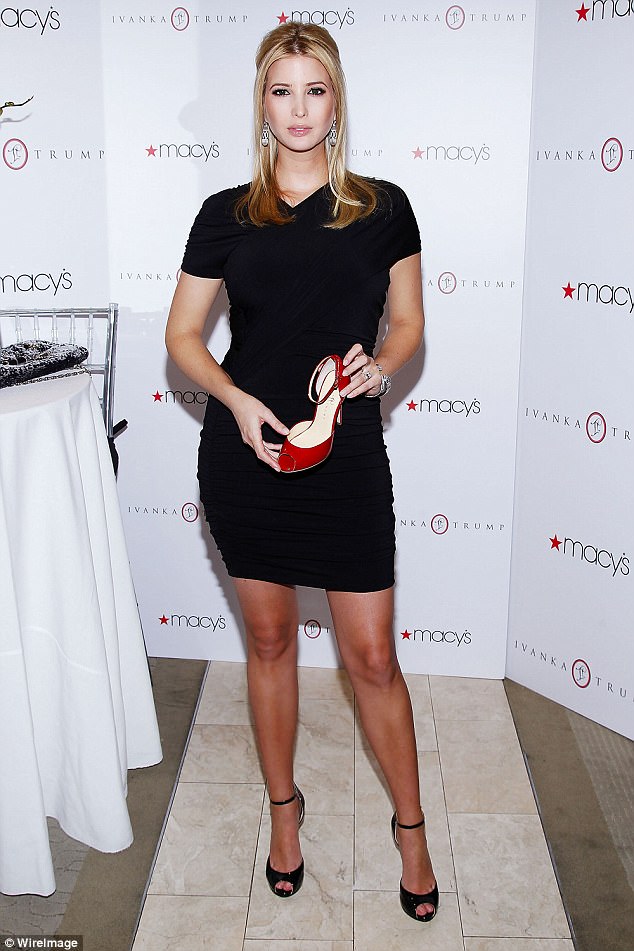 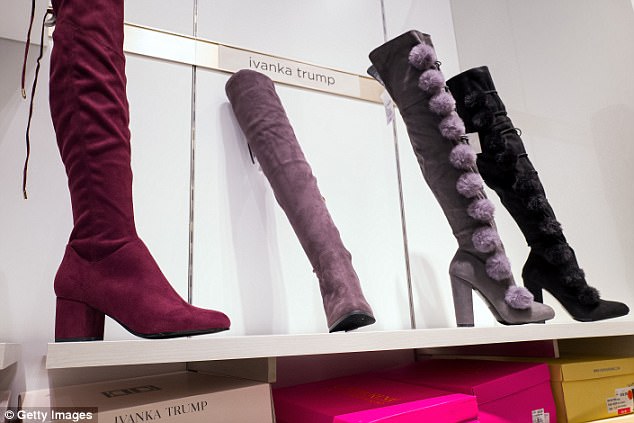 ‘I don’t know how much money she’s making on this and why it’s worth it. I think it’s putting our trade policy in a very awkward situation.’

A review of the records that are available about Ivanka Trump’s supply chain found two potential red flags.

In one case, a province in eastern China announced the award of export subsidies to a company that shipped thousands of Ivanka Trump handbags between March 2016 and February of this year, Chinese public records show – a possible violation by China of global fair trade rules, trade experts said.

Tons of Ivanka Trump clothing were exported from 2013 to 2015 by a company owned by the Chinese government, according to public records and trade data. It is unclear whether the brand is still working with that company, or other state-owned entities.

Her brand has pledged to avoid business with state-owned companies now that she’s a White House adviser, but contends that its supply chains are not its direct responsibility.

Ivanka Trump’s brand doesn’t actually make its products directly. Instead, it contracts with licensees who oversee production of her merchandise. In exchange, those licensees pay the brand royalties.

Ivanka Trump’s brand was asked for a list of its suppliers. The company declined to disclose them. The clothing, footwear and handbag licensees also declined to reveal source factories.

Abigail Klem, president of IT Operations LLC, which manages Ivanka Trump’s brand, said the company does not contract with foreign state-owned companies or benefit from Chinese government subsidies. However, she acknowledged that its licensees might. 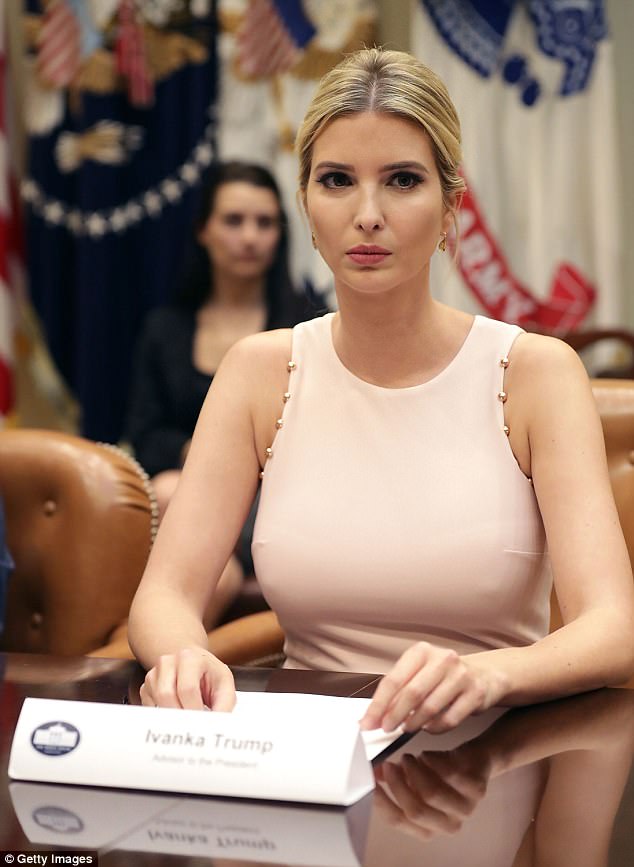 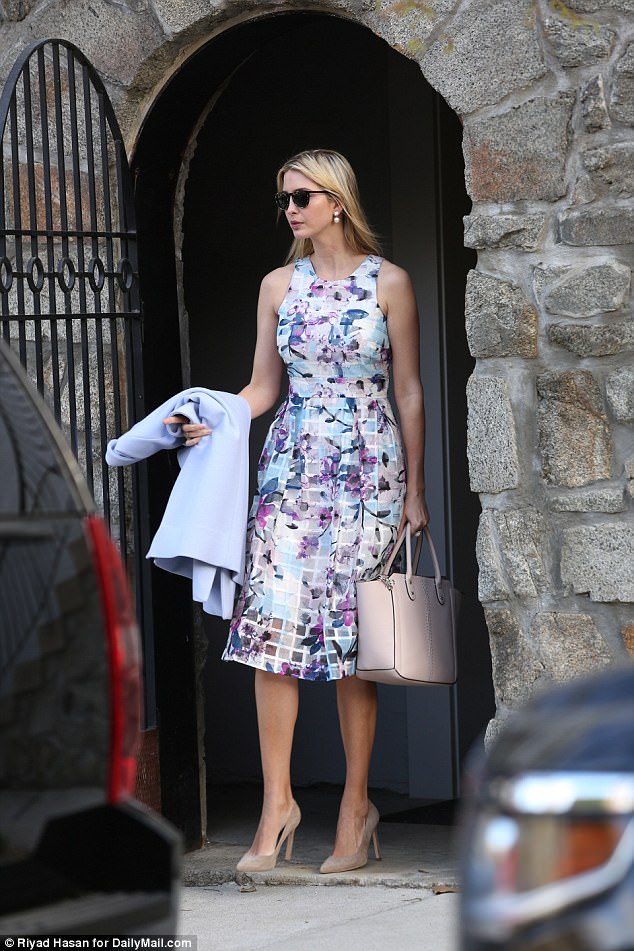 Ivanka steps out of her Kalorama, Washington DC home wearing a dress from her line in March

‘We license the rights to our brand name to licensing companies that have their own supply chains and distribution networks,’ Klem said in an email.

‘The brand receives royalties on sales to wholesalers and would not benefit if a licensee increased its profit margin by obtaining goods at a lower cost,’ she added.

But Michael Stone, chairman of Beanstalk, a global brand licensing agency, said lower production costs for licensees would ultimately benefit Ivanka Trump by freeing up money for marketing or lower retail prices, both of which drive sales.

Panjiva’s records show that 85 per cent of shipments of her goods to the US this year originated in China and Hong Kong, but beyond that, it’s becoming more difficult to map the brand’s global footprint.

The companies that shipped Ivanka Trump merchandise to the US are listed for just five of 57 shipments logged by Panjiva from the end of March, when she officially became a presidential adviser, through mid-September.

Panjiva collects data from US Customs and Border Protection, which did not immediately release the missing data.

While in many cases the manufacturer ships goods directly, merchandise can also be made by one company and shipped by another trading or consolidation company.

There used to be more visibility. Last year, 27 per cent of the companies that exported Ivanka Trump merchandise to the US were identified in Panjiva’s records, and back in 2014 a full 95 per cent were named.

For two of Ivanka Trump’s licensees – G-III Apparel Group Ltd. and Marc Fisher Footwear – the number of shipments appears to plunge in 2015, likely because they ‘requested to hide’ their shipment activity, according to Panjiva records.

The brand declined to comment on the growing murkiness of its supply chain.

Chris Rogers, an analyst at Panjiva, said any company can ask customs authorities to redact its information for any reason. About a quarter of companies request anonymity, he said, but the majority don’t mind disclosing who they’re doing business with.

‘A lot of companies have said, ‘yes there might be a commercial disadvantage, but we want to be transparent about our supply chain,” he explained. ”Why would we want to cover up the fact that we’re working with this particular company?”

While ethics lawyers may see disclosure as the best antidote to conflict of interest, many brands see it as a tool to keep supply chains scandal-free.

Public outcry over sweatshop conditions and worker suicides prompted companies like Nike Inc. and Apple Inc. to disclose the names and addresses of their manufacturers, and a growing number, including Gap Inc., the H&M Group, New Balance Athletics Inc., Adidas AG and Levi Strauss & Co., publicly identify their suppliers.

Ivanka Trump should do the same, said Allen Adamson, founder and CEO of BrandSimple Consulting. ‘It’s a missed opportunity to lead by example.’

What shipping records do show is that a company called Zhejiang Tongxiang Foreign Trade Group Co. Ltd., a sprawling conglomerate once majority-owned by the Chinese state, sent at least 30 tons of Ivanka Trump handbags to the U.S. between March 2016 and February.

Zhejiang province’s commerce department said in June 2014 that it would help lower export costs for that same company, along with nine other local enterprises, through a special three-year trade promotion program.

Among the measures outlined were export insurance subsidies and funding for online trading platforms and international marketing, as well as special funds earmarked for foreign trade companies with large-scale, fast-growing exports.

The value of the subsidies is unclear, as are details about how the directives were implemented, but using subsidies to reduce the price of exports is considered so destructive to fair trade that the World Trade Organization generally bans the practice.

Four trade experts in the United States and China said the Zhejiang measures appeared to violate World Trade Organization rules. ‘These are clearly export subsidies,’ said Gary Hufbauer, a trade expert at the Peterson Institute for International Economics in Washington.

It was also found that from Oct. 2013 to Jan. 2015, Jiangsu High Hope International Group Corp., a conglomerate majority-owned by the Jiangsu provincial government, shipped 45 tons of Ivanka Trump clothing to the U.S., according to records from ImportGenius and Panjiva.

High Hope said  it had ‘a small number of business dealings’ with Ivanka Trump licensee G-III Apparel, but declined to answer questions about whether the relationship is ongoing.

G-III, which is based in New York City, declined to respond to specific questions but said in a statement that it is ‘committed to legal compliance and ethical business practices in all of our operations worldwide.’ Ivanka Trump licensee Mondani Handbags & Accessories Inc., also headquartered in New York, did not respond to requests for comment.

Ivanka Trump’s brand said it was in the process of reviewing its supply chains with the help of ‘independent experts whose mission it is to advance human rights’ and emphasized that all licensees, manufacturers, subcontractors and suppliers are required to abide by the law, as well as ethical practices set forth in a vendor code of conduct.