Don Nelson spent nearly 50 years in the NBA, winning five titles as a player and more games than any other coach in league history. But now that he’s a 78-year-old retiree living in Hawaii, he’s trying his hand at something else.

‘Yeah, I’ve been smoking some pot,’ the suddenly long-haired Nelson told reporters at Thursday’s press conference honoring his 2006-07 Golden State Warriors team. ‘But I never smoked when I played or coached. It’s new to me.’

The room erupted with laughter, and not just the reporters.

Two of his former players, Jason Richardson and Stephen Jackson, immediately cracked up as well, with the latter raising both arms victoriously.

Don Nelson spent nearly 50 years in the NBA , winning five titles as a player and more games than any other coach in league history. But now that he’s a 78-year-old retiree living in Hawaii, he’s trying his hand at something else: smoking pot 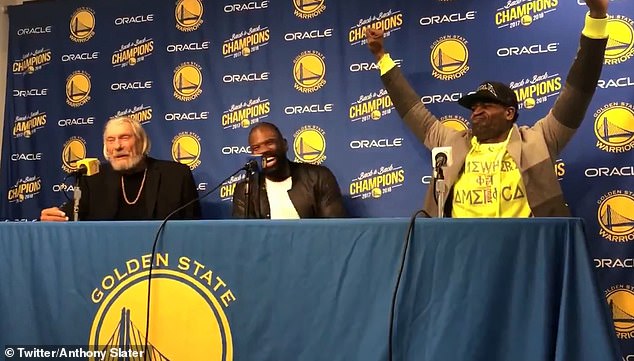 ‘I’m having a pretty good time,’ Nelson continued, speaking over the laughter in the room. ‘It’s more legal now than it’s ever been. So I’m enjoying that.’

Jackson went on to say that he’s returning to college to get his degree, which is something Nelson did at the University of Iowa at age 71.

‘After they fired me here, I wasn’t doing much, I went back to college and got my degree,’ Nelson said, eliciting more laughter from reporters.

Nelson’s reputation as a player and coach could not be any further from his recent persona.

As a famously un-athletic, but fiery player, the clean-cut Nelson became a significant rotation player under coaches Red Auerbach, Bill Russell, and Tommy Heinsohn in Boston. As a coach, he often battled publicly with his players, most famously Chris Webber and Monta Ellis.

Even on Thursday, after Jackson described his favorite play with the Warriors, Nelson chimed in with a dig at his former player: ‘There wasn’t a whole lot of passing after he got [the ball].’

Nowadays, the slick, bearded, long-haired Nelson bears a striking resemblance to Jon Voight’s gangster character in the movie, Heat. He lives in Maui, where he hangs out and plays poker with actors Woody Harrelson and Owen Wilson, as well as country music singer Willie Nelson, who introduced him to the drug. He even grows his own strain of marijuana, ‘Nellie Kush,’ as he told The New York Times last year.

At one point during Thursday’s press conference, Jackson asked Nelson if he brought any with him to Oakland, where marijuana is legal.

‘I’ve got a medical card,’ Nelson told the times in 2018. ‘I’m legal here. When any athlete gets old, every injury you have sustained seems to resurrect. It helps me deal with the pain without pain pills, and helps with that stress.’

‘I’m personally involved in the rental business,’ he said Thursday, as the laughter died down. ‘I invested my fortune. And so we rent out our structures that we bought over the years and we make a good living.’

Even though he’s surprised that he became a pot smoker, Nelson’s introduction isn’t totally unique – particularly for a former player.

Harrington began using marijuana after surgery because he did not like the pain medication that was being offered to him. Since then he launched his own company, Harrington Wellness, which sells a variety of products made from the non-psychoactive part of the plant.

‘Business is great,’ Harrington told GQ in February of 2018. ‘We’re operational in Colorado. We’re on shelves in Oregon; we’re about to make a big push there. Michigan, we actually just submitted our license yesterday. We did a huge partnership with this company called Vertical Brands, right here out of Agoura Hills, California.’

Interestingly, Harrington got started in the industry after he saw how marijuana helped his grandmother with pain, glaucoma and diabetes.

‘The fact that she could almost see clearly again, it changed my life.’

Harrington isn’t the only former NBA player to enter the marijuana industry. Former Portland Trail Blazers forward Cliff Robinson has his own indoor farm in Oregon and sells pot under the name ‘Uncle Cliffy.’

Harrington has been pushing for the NBA to remove marijuana from its list of banned substances, in part, because 20 of the league’s franchises are based in places that have already legalized either recreational or medical marijuana. He estimates ‘over 70 percent’ of athletes use marijuana.

‘I’m now at the point where, personally, I think [marijuana] probably should be removed from the ban list,’ Stern said in an interview with Harrington for the Uninterrupted. ‘I think there is universal agreement that marijuana for medical purposes should be completely legal.’

‘Not only the players, but I think coaches consume, I think the owners consume. I think in sports it’s very prevalent and it’s right there,’ Harrington said.

Current Golden State Warriors coach Steve Kerr admitted to trying marijuana as a way to deal with the pain from a botched back surgery that has plagued him over the last two years.

‘I guess maybe I could even get in some trouble for this, but I’ve actually tried [marijuana] twice during the last year and a half when I’ve been going through this pain, this chronic pain that I’ve been dealing with,’ Kerr told the Warriors Insider podcast.

Stern, 75, was once known as an authoritarian commissioner who famously imposed a strict dress code on NBA players in 2005.

However, he admits his views on marijuana use have changed with public perception.

‘It’s a completely different perception,’ Stern said. ‘I think we have to change the Collective Bargaining Agreement and let you do what is legal in your state. If marijuana is now in the process of being legalized, I think you should be allowed to do what’s legal in your state.’