Most of us had ambitious plans for lockdown — to cultivate that veggie plot, paint the house, take up yoga, volunteer — but few of us have conquered the ambitious ‘to do’ list we sketched out in March.

TV presenter Anita Rani has, however, been so productive in lockdown that her presence on TV and social media seems ubiquitous. This is in part because BBC’s Countryfile, which she co-presents, has been deemed essential viewing by six million of us. And Anita, 42, perennially youthful, smiley, upbeat, has been bringing the nation her brand of good cheer.

‘Everyone needs their hug on a Sunday night, especially now,’ she says. And Countryfile, with its mix of the cosily bucolic and big outdoors, hits the spot. Anita, who lives in East London with her husband Bhupi, 40, a tech executive, even filmed herself in her back garden; not the most pastoral of locations, she admits: ‘But this week I was filming in Epping Forest. We’ve all been discovering the beautiful green spaces on our own doorsteps.

Anita Rani, 42, (pictured) who lives in East London, reflected on her career and upbringing in Bradford, as she presents Channel 4 TV series, Britain’s Best Parent?

‘I’m so used to being hectic, having a million things going on at once, but now I’m just appreciating my own space; gardening, growing and nurturing the vegetables we planted as seeds at the start of lockdown; listening to birds and wildlife from our back windows: it all makes you feel happy.’

But it isn’t just Countryfile: she has capitalised on the boom in home cooking, too, building up a loyal Instagram following of 62,000 and rustling up her favourite Indian food in Rani’s Recipes.

‘Everyone was bulk-buying chickpeas at the start of lockdown. When you feel your world is changing dramatically, you tap into the things that feel like home,’ she says.

In 2012 she won BBC’s Great Sport Relief Bake Off and during lockdown Bhupi celebrated his 40th birthday, so she made him two cakes: ‘His favourite Mary Berry victoria sponge with home-made strawberry jam because I’ve got time on my hands, and Nigella’s Guinness and chocolate cake.’

Today, clear-skinned and fine-boned, wearing a white blouse and her trademark red lipstick, she exudes the sort of wholesome good health we all aspire to.

Alongside her recipes, she is also giving social media followers natural beauty tips: there’s a face-mask made from gram (chickpea) flour and one made from the aloe vera plant. 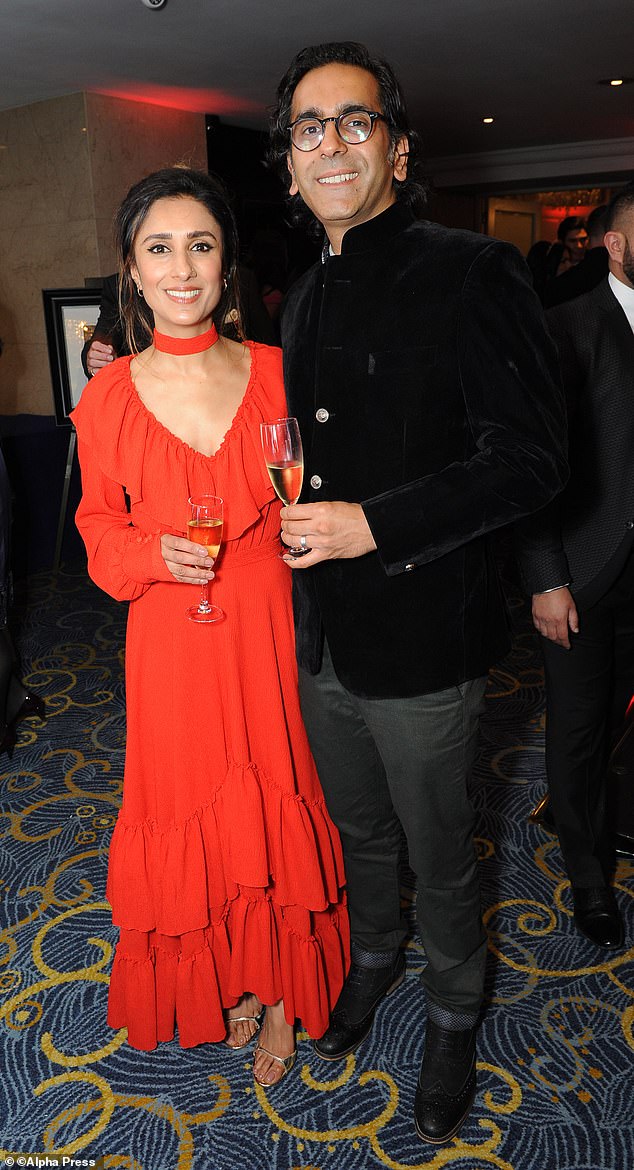 Anita revealed that she would wake up at night worrying about what’s happening in India during the beginning of lockdown. Pictured: Anita with her husband Bhupi

‘You just scoop out the inside of a stem, add some lemon juice and put it on your face. Leave for five or ten minutes. Very healing,’ she says during our Zoom call. Her default mode is upbeat but she admits to moments of sombre reflection. ‘I think, like everyone now, I have experienced anxiety. You can’t fully grasp what the world is going through.

‘Right at the beginning of lockdown I woke at night worrying about what was happening in India. We were talking about social distancing and I was thinking it was a privilege to be able to keep apart. Some people don’t even have a roof over their heads and starvation will get them before coronavirus.’

Her travel work and a series on the Ganges postponed, she is ‘philosophical’ about restrictions: ‘What keeps things in perspective is having friends who have very different lives.

‘One of my best friends is a pharmacist for an intensive care ward and her two young sons are living with their grandparents so she can go to work every day.

‘When you have friends who are that incredible and on the front line doing remarkable jobs, you can’t get hung up on your own issues, can you? My problems are very small.’ 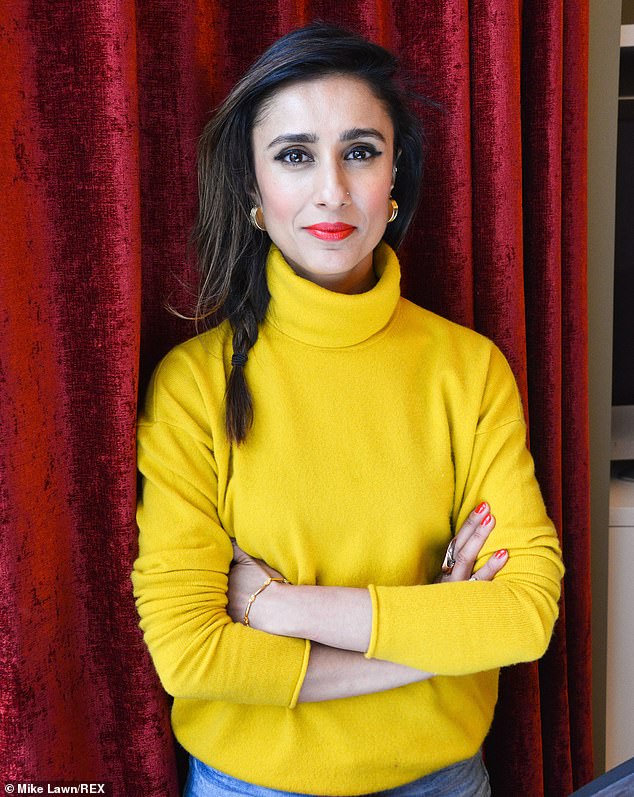 Anita (pictured) who suffered a miscarriage two years ago, admits she didn’t pause to grieve and didn’t recognise the loss until she had a panic attack

She and Bhupi have no children and she has written, with lacerating honesty, about the miscarriage she suffered two years ago. She admitted she neither paused to grieve nor recognise the loss until she had a panic attack while climbing Mount Kilimanjaro for Comic Relief last year. Only then did she realise she was ‘cripplingly sad’.

She speculated about why she had sublimated her grief for so long: ‘Well, because I’m cursed with both the British stiff upper lip and Asian conditioning of not sharing anything, lest you bring shame on yourself, your parents, family, friends, total strangers, anyone! It’s this double-whammy of suppression that turned me into a master of ignoring anything that involves introspection and feelings.

‘I’m one of those very practical types; I get on with life. I’ve essentially lived like a rock and really, honestly, I thought I was doing great,’ she wrote in Red magazine at the time.

Today, when I ask if she still feels the loss, she is briskly dismissive: ‘You just get on with life, don’t you?’

She is currently presenting a Channel 4 TV series, Britain’s Best Parent?, in which couples with wildly diverse methods of parenting — from chaotic to super-pushy — demonstrate how they raise their kids, after which a studio audience votes for their favourite. Does she have an opinion on the best way to parent? 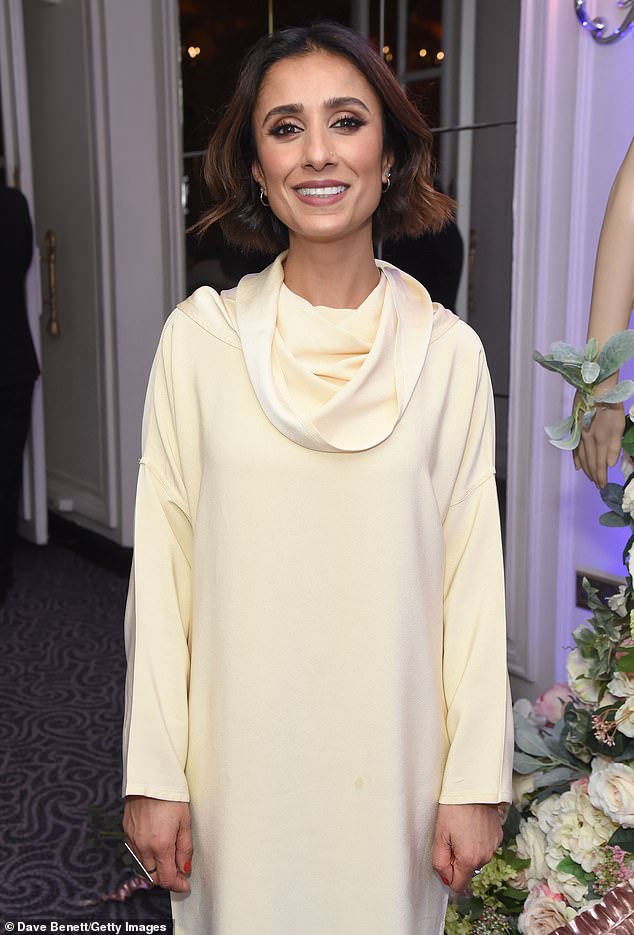 Anita (pictured) was raised in Bradford by her Sikh mum Lakhbir who came to the UK from India, and Hindu dad Balvinder

‘How can I possibly have a view as a woman with no children?’ she says. ‘But love is probably key — a lot of love and possibly bribery, or humiliation!’ She laughs.

I wonder if she found her childlessness and the abundance of parenthood on the show difficult to bear? ‘Not at all,’ she says. ‘The moment I am in a studio and the cameras are on, it’s all about the people I’m interviewing.’

So here we have the measure of her: Anita (whatever she may be feeling inside) is the consummate professional, never letting her guard slip, always outwardly upbeat. Does she like the ‘relentlessly perky’ label?

‘No one likes a miserable face on TV,’ she says briskly.

A strong work ethic was key to her upbringing and has fired her ever since. She was raised in Bradford by her Sikh mum Lakhbir (Lucky) — who came to the UK from India for her arranged marriage — and Hindu dad Balvinder, who was four when he arrived in Bradford and is, says his daughter, ‘a Yorkshireman through and through’. 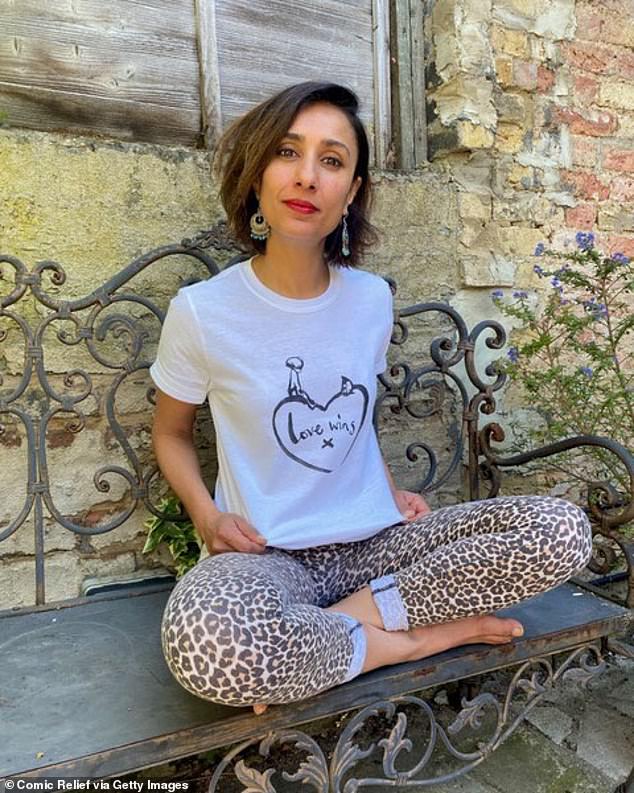 Anita (pictured) who was speaking in perfectly formed sentences by the age of one, is able to speak three languages

Her parents ran their own thriving clothing manufacturing business, which they built up from scratch.

Anita and her younger brother Kuldeep helped out. ‘We’d go to the factory after school, put labels on clothes, do market stalls at weekends. Set bedtimes were not a thing. We ate delicious home-cooked Indian food, nothing microwaved, and were brought up with very Indian values: work hard, respect your elders.

‘But school (the independent Bradford Girls’ Grammar School where she ‘thrived’) was incredibly white. So it was a balance of two contrasting worlds.

‘Every Saturday me and my brother would clean the house from top to bottom: Hoover, dust, polish. No pocket money. I’d say, “Sarah’s dad gives her £1 for cleaning his car,” and Mum and Dad wouldn’t even answer. They just looked at me as if to say, “Oh dear.” So that encouraged me to get a job as soon as possible. I had lots of them: shops, petrol station, and I had a radio show when I was 14 on Sunrise Radio in Bradford.’

She was talking in perfectly formed sentences when she was one and speaks three languages: Punjabi, Hindi and English. 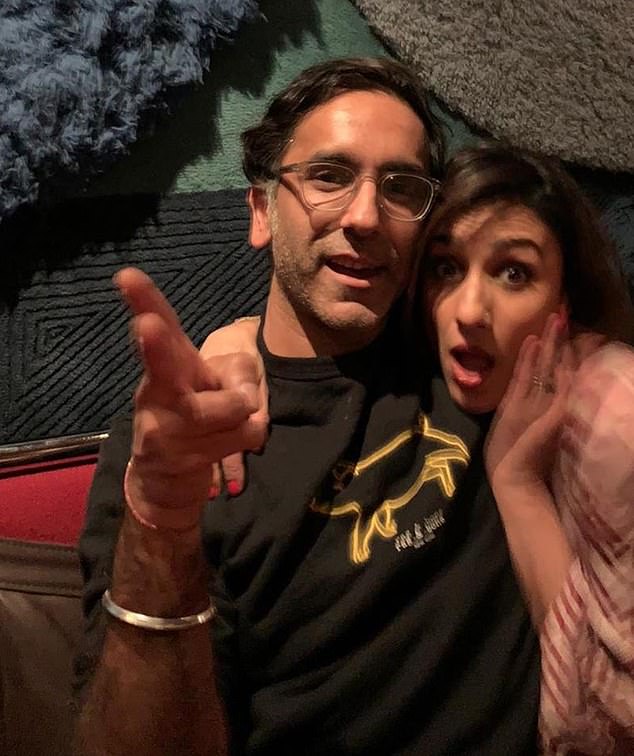 Anita revealed she has experienced racism but her husband has had it worse, as an Asian male. Pictured: Anita and her husband Bhupi

‘And I haven’t stopped talking since,’ she laughs. Armed with a degree in broadcasting from Leeds University, she came to London in 2002.

In the context of the Black Lives Matter movement, she feels the onus must be on businesses and organisations to embrace and encourage black, Asian and minority ethnic (BAME) groups into careers that have, until now, felt closed to them.

She says: ‘In the light of everything that’s happening now I don’t think it’s for BAME groups to work to get into arts that have traditionally felt closed to them, as much as for the institutions themselves to open their doors.

‘It’s for us as a nation to think how we can have more inclusive and diverse workplaces. Then more BAME people will come through if they are actively encouraged. I think everyone has a duty to acknowledge their prejudices, not be offended by what’s going on and put themselves in other people’s shoes.’ 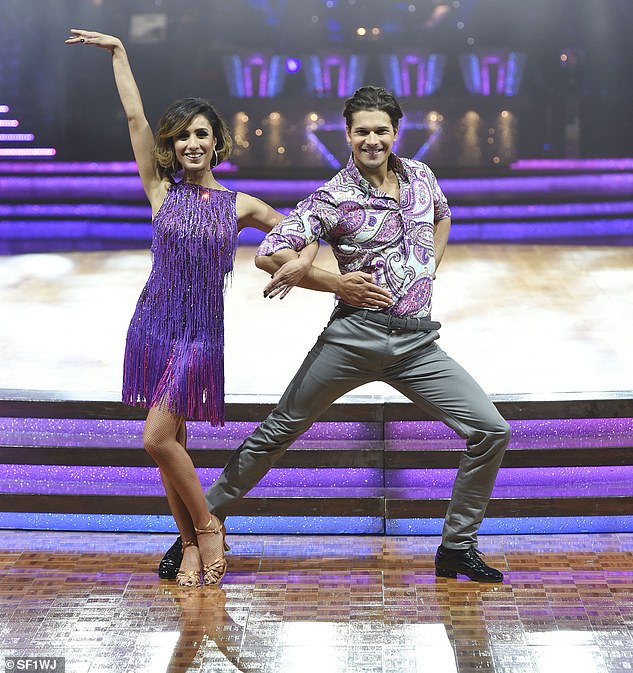 Anita worked as a BBC Researcher and Sky Sports presenter before becoming a household name with Countryfile and Strictly. Pictured: Anita With Gleb Savchenko on Strictly

Her own career progress, from BBC researcher via the Beeb’s Asian Network to Sky Sports, where she co-presented Cricket AM, then to BBC One’s Watchdog was a remorseless upward trajectory. But it was Countryfile and Strictly that made her a household name.

When she samba-ed into fourth place in Strictly Come Dancing, in 2015, it was the first time she had discovered dance.

This month she will be co- presenting two live ballet broadcasts, streamed from the Royal Opera House, with retired ballerina and former Strictly judge Dame Darcey Bussell. ‘She voted me off Strictly but I don’t bear a grudge!’ she laughs.

‘I am in awe of ballet dancers. They’re real superhumans; utterly mesmerising. The hours they train, their physical capabilities and the mental toughness they need to achieve that level of excellence — all to bring us joy! 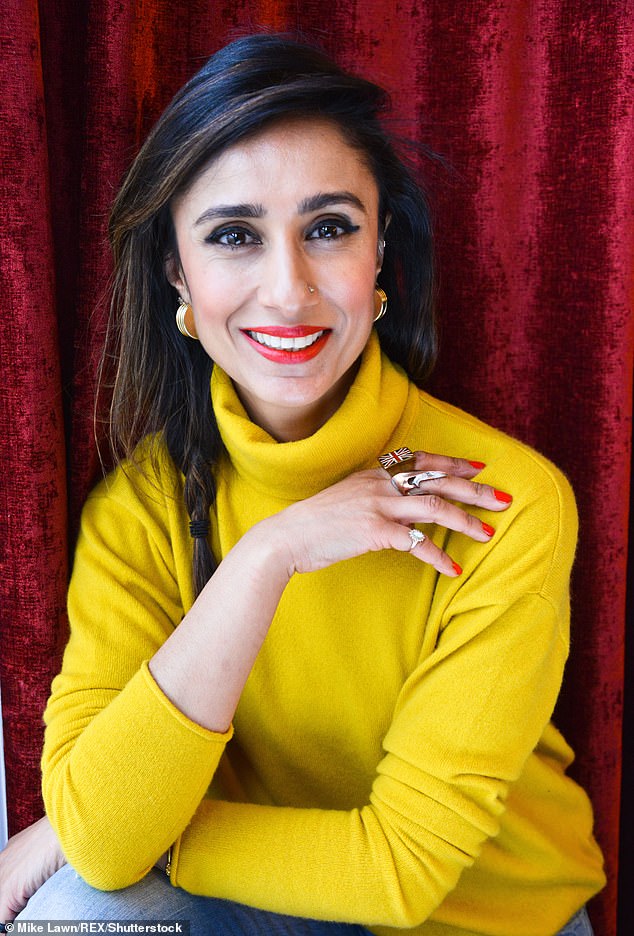 Anita (pictured) revealed that she plans to take her mother to the Royal Opera House, when audiences are able to return

‘Mum, who did Indian classical dance, thought when she arrived in England she’d be going ballroom dancing and to the ballet every week. She loves glamour. She adores Strictly and has a photo of me with Darcey. She’d love to meet Darcey — and Angela Rippon, who hosted the original Come Dancing.

‘She was so disappointed when she came to this country and Dad said, “We don’t go dancing, we go to the pub.” He took me, too, when I was old enough, bought me half a pint and taught me how to play pool because he didn’t want me to embarrass him by being rubbish at it. Not many Asian dads did that then.’

Now, Anita is planning that long-overdue treat Lucky dreamt of when she first came to England. ‘Mum still loves ballet and when the audiences return to the Royal Opera House, I’ll take her,’ she says. ‘And who knows? She might get to meet Darcey, too.’

Live from the Royal Opera House, including a new ballet from Wayne McGregor, resident choreographer of The Royal Ballet, will be broadcast on June 20 and 27 at 7.30pm. Further details at roh.org.uk.