Anthony Albanese has farewelled his ‘great friend’ Jacinda Ardern with a sweet photo after his New Zealand counterpart announced her shock resignation.

The Prime Minister expressed his respect and admiration for Ms Ardern just minutes after the leader revealed she had ‘nothing left in the tank’.

He tweeted a sweet photo of him and the outgoing prime minister mid-embrace during a visit to Sydney when the leaders met for bilateral talks in June.

‘Jacinda Ardern has shown the world how to lead with intellect and strength,’ Mr Albanese wrote.

‘She has demonstrated that empathy and insight are powerful leadership qualities.

‘Jacinda has been a fierce advocate for New Zealand, an inspiration to so many and a great friend to me.

‘I look forward to working with the next Prime Minister of New Zealand, and I wish Jacinda Ardern and her family well in the next chapter of their lives.’

Despite describing Ms Ardern as his ‘great friend’ the leaders have not always seen eye-to-eye, recently clashing heads over a contentious immigration issue. 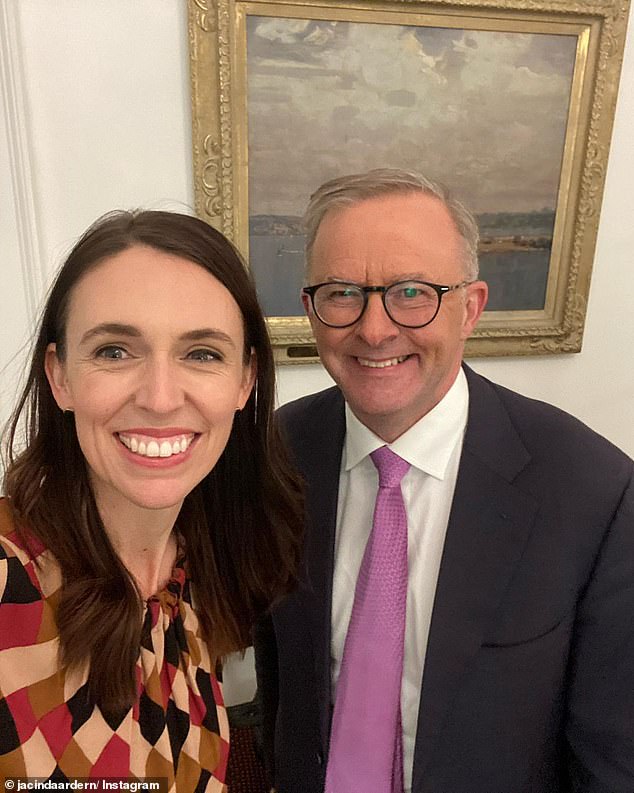 During a bilateral meeting in Sydney in July, the leaders (pictured) enjoyed the Vivid light show at Sydney Harbour and traded their favourite vinyl records

Mr Albanese was forced to abandon plans to resolve a critical shortage of nurses after Ms Ardern rejected a campaign designed to entice Kiwis to Australia.

Both countries experienced a severe shortage of skilled labour during the Covid pandemic due to repeated border closures.

Ms Ardern slammed the suggestion as a ‘hard no’ during a press conference in Sydney, prompting her counterpart to defend the campaign.

Mr Albanese assured Ms Ardern that the growth of Australia’s nursing capacity would not come at the expense of ‘our friends’ in New Zealand.

‘We have common challenges of skills shortages. That’s part of global challenges as well,’ he told reporters during the visit in July.

‘What we want to do is work together so we are achieving outcomes that benefit both New Zealand and Australia rather than competing against each other.

‘That’s one of the reasons why we engaged here today so constructively.’

Despite this road bump, the leaders spent the visit enjoying the Vivid light show at Sydney Harbour and trading their favourite vinyl records. 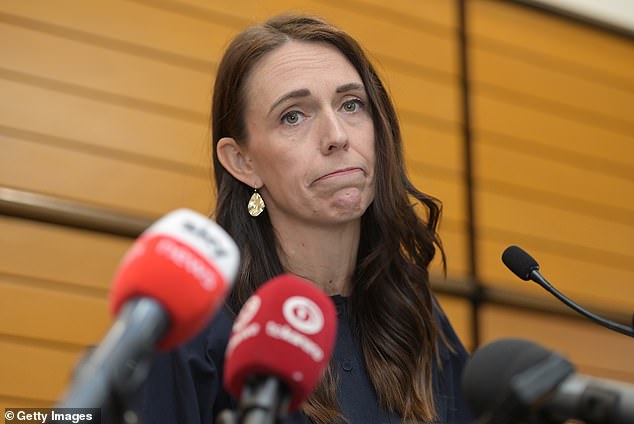 Ms Ardern’s resignation comes into effect on Sunday if the Labor Party can elect her replacement, or on February 7 if the process was drawn out 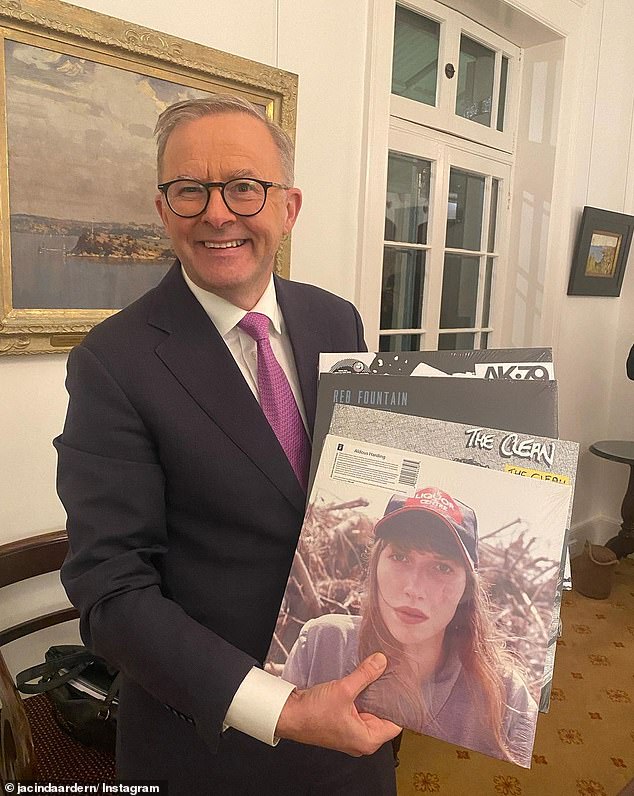 The leaders also discussed deportation laws, climate change issues and dealing with an increasingly aggressive China in the Pacific region.

The meeting came just months before Ms Ardern would announce she would be stepping down from her role in an emotional press conference on Thursday.

Her resignation comes into effect on Sunday if the Labor Party can elect her replacement, or on February 7 if the process was drawn out.

Ms Ardern said she hoped to find the energy and heart during the Christmas break to stay in the job, ‘but I have not been able to do that’.

‘I am human. Politicians are human. We give all we can for as long as we can, and then it’s time. And for me, it’s time,’ she said.

‘I know what this job takes. And I know that I no longer have enough in the tank to do it justice. I am leaving because with such a privileged job comes a big responsibility.

‘The responsibility to know when you are the right person to lead – and also when you’re not.’

Ms Ardern resigned at just 42 after becoming leader just over five years ago on October 26, 2017, and was New Zealand’s youngest-ever PM 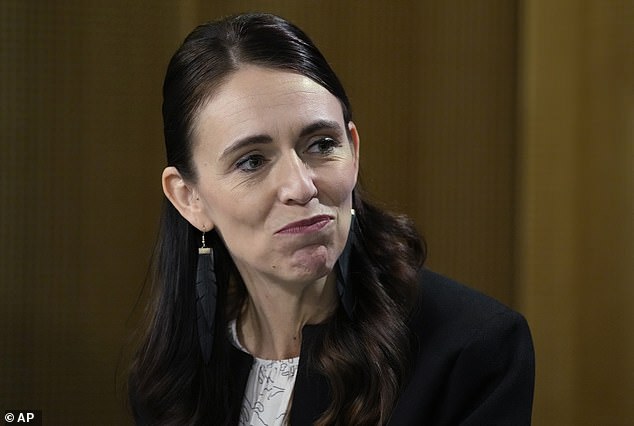 Ms Ardern resigns at just 42 after becoming leader just over five years ago on October 26, 2017, and was New Zealand’s youngest-ever PM (pictured on Thursday)

She insisted her party trailing in the polls the rival National Party ahead of the upcoming election had nothing to do with her decision to step down.

‘But we need a fresh set of shoulders for the challenges of both this year and the next three.’

Ms Ardern faced unrelenting criticism for implementing some of the world’s harshest Covid restrictions, including lockdowns where New Zealanders couldn’t even buy takeaway food and a more than two-year border closure. 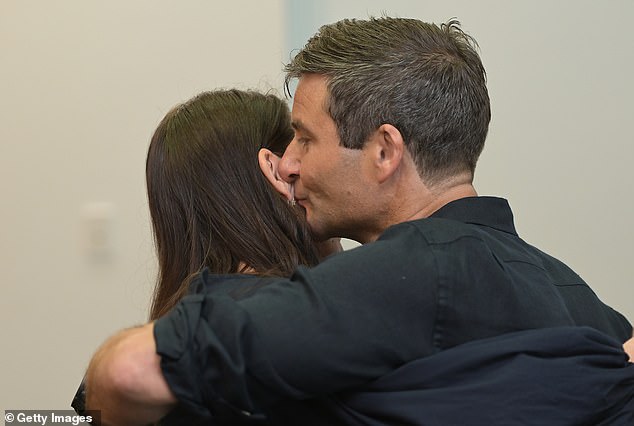 But she denied the constant attacks, which continued last year as the economy faltered and the cost of living rose, played a role in her decision.

‘I’m not leaving because it’s hard. I know when I have enough left in the tank to do it justice. I would be doing a disservice to New Zealanders to continue,’ she said.

The resigning PM was asked if she would take up a role with the UN after leaving office and didn’t give a straight answer.

Instead, she insisted she had ‘no plans’ other than relaxing with her daughter Neve and marrying her fiancé Clarke Gayford after their wedding was called off due to Covid restrictions.