Jack de Belin embraced his devoted fiancé and young children after making a triumphant return to the rugby league field.

The St George Illawarra forward, 30, received a standing ovation at Sydney’s Jubilee Oval as the Dragons took on the Brisbane Broncos on Thursday night.

It was the Blues origin player’s first NRL match in almost three years after being sidelined to face rape charges which were eventually dropped last month. 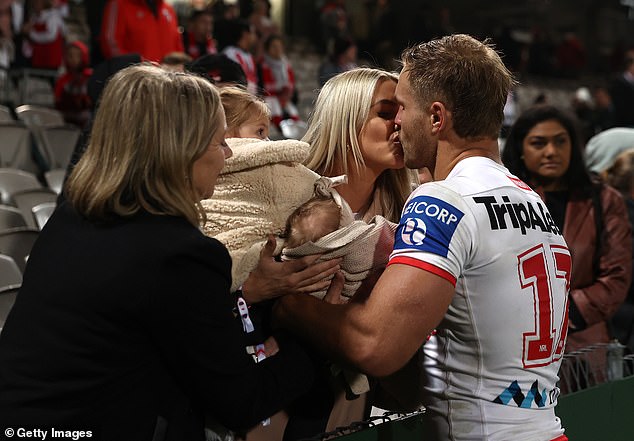 The St George Illawarra forward, 30, received a standing ovation at Sydney’s Jubilee Oval as the Dragons took on the Brisbane Broncos on Thursday night 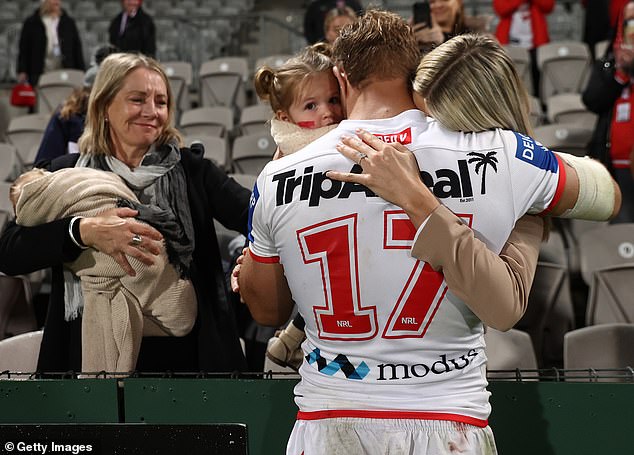 The Director of Public Prosecutions decided not to pursue the sexual assault charges against the St George Illawarra lock after two criminal trials failed to reach a verdict.

The ordeal meant de Belin was banned from playing under the NRL’s no fault stand down policy, but the hard-running Dragon’s star is now free to continue his career.

There was a huge roar from the crowd when finally de Belin stepped onto the field in St George’s 52-24 win over Brisbane.

He came on as an interchange player and ended up staying for about 25 minutes.

When the match was over he headed over to his partner Alyce Taylor and their two young children.

Ms Taylor has continued to stand by de Belin throughout the harrowing period, so it was an emotional moment when the couple embraced on the sidelines to the cheer of nearby supporters.

Channel Nine commentators Darren Lockyer and Allana Ferguson were full of praise for de Belin who performed strongly given the time off.