A Jack Russell glued his teeth together after chowing down on junk mail – but was thankfully rescued from the sticky situation.

Adorable Oscar, 10, couldn’t open his mouth after chewing on a leaflet which had been posted through the letterbox of his owner’s Blackpool home.

Pat Finnerty, 55, found the little dog distressed after returning home from an hour-long shopping trip with her daughter.

Pat Finnerty, 55, returned home to find her 10-year-old Jack Russell Oscar in a sticky situation – he had glued his mouth shut after chomping on junk mail posted through her letterbox

‘I brought him back a treat and he wanted to eat it, but he couldn’t open his mouth and there was all this saliva everywhere,’ she said.

‘When I looked closer at his mouth, I could see that he couldn’t open his jaw but I didn’t know what it was.

‘I then noticed a chewed up leaflet that must have been posted through the letterbox and realised what had happened.’ 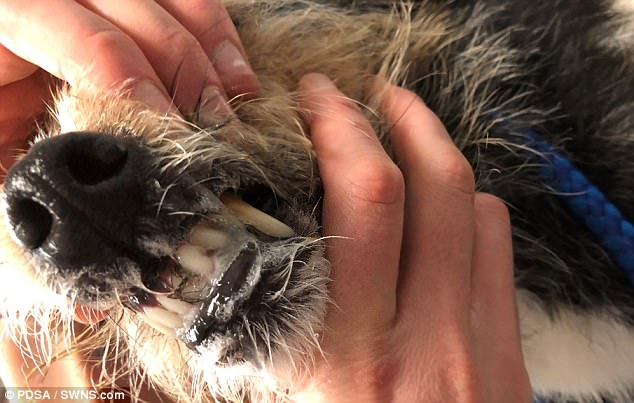 Oscar had to be rushed to the PDSA’s Pet Hospital for emergency treatment to unstick his mouth.

The beloved pet was given a general anaesthetic so that vets could remove the ‘papier mâché-like’ substance which had glued his jaws shut.

PDSA Vet Rachel Smith said: ‘Oscar was brought into us in an extremely distressed state.

‘Chewing the leaflet had turned into a sticky wallpaper-like substance inside his mouth, which had glued his teeth together.

‘Once he was anaesthetised, we used our dentistry equipment to remove it from his mouth.

‘Thankfully he made a good recovery and he was able to go home the same day.’ 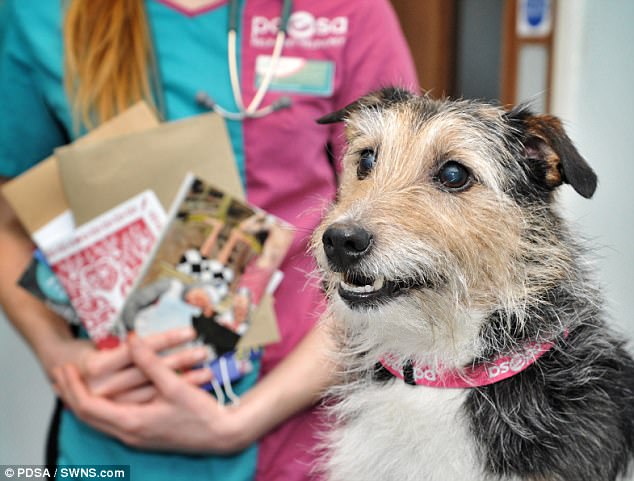 Pat said she was hugely grateful to PDSA for the treatment Oscar received and now takes extra precautions to prevent him going for the mail again.

She said: ‘He hasn’t learned his lesson and, given the chance, he still tries to get the post.

‘I now take extra care to shut the door between the lounge and the front door when I go out.

‘Oscar means the world to us, so I don’t want him getting into trouble again.’

PDSA vets advise taking steps to ensure pets can’t get at any mail such as keeping hallway doors shut or using a letter cage on the inside of the front door.

Letters and leaflets dropping through the door can be particularly enticing for dogs as they often like to explore new items with their mouths.