An ‘inconsiderate’ driver has had their car towed out of a Queensland carpark by an angry boatie after blocking him and his trailer in a designated boat parking spot.

In footage shared online, the parked white Toyota is seen attached by a rope to the back of the boat owner’s white Ford 4WD in the car park of the popular Jacobs Well Boat Ramp.

As the boatie steps on the accelerator, the parked car’s tyres – still locked in place by the parking brake – are heard screeching as the vehicle is dragged forward.

Road rage at its best!! When you park infront of someones boat or jet ski trailer and block them in, they wont be happy. The car being dragged blocked in the other blokes trailer. They left him bugger all room to get it out and luckily he was able to get it out by hand. But…he was not happy. Oh you will have to forgive hubbys commentary ..

The Toyota is towed by the boatie through the carpark and out of the entrance onto the main street, as a shocked onlooker is heard saying ‘that’s so inconsiderate!’

The footage was uploaded to Facebook by a travel blogger, who captioned the shocking moment: ‘Road rage at its best!!’

‘When you park infront (sic) of someones (sic) boat or jet ski trailer and block them in, they wont (sic) be happy.’

‘The car being dragged blocked in the other blokes (sic) trailer. They left him bugger all room to get it out and luckily he was able to get it out by hand’, the original poster explained.

Commentators shared their disbelief at the situation, with one commenter coining the altercation as ‘karma’.

‘Cars parking in the boat/jetski trailer parking area are a menace,’ another wrote. 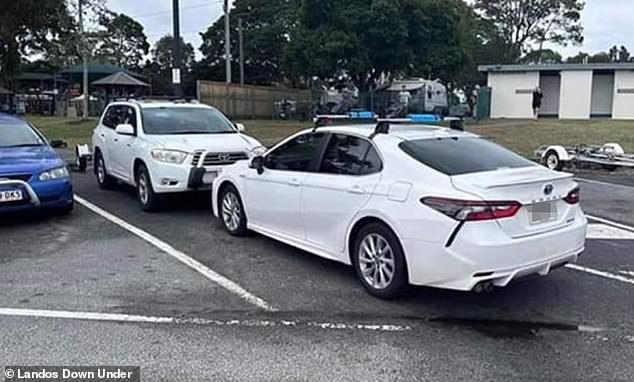 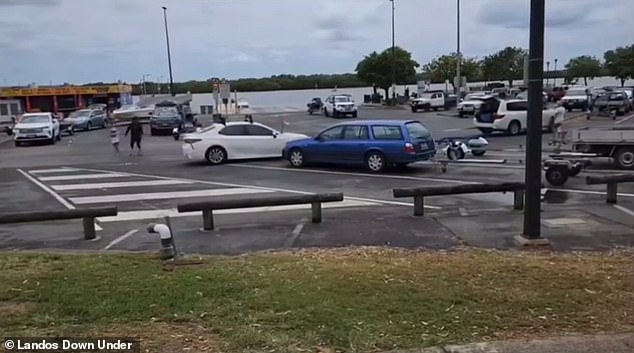 The boatie attached the car to his by a rope (pictured), and dragged it out of the spot and through the carpark

‘This guy get (sic) Australian of the year for the next 2 years! Absolute legend!’ another wrote.

‘some one (sic) get that man a beer please,’ one viewer joked.

One local said there is ‘always ramp rage at jacobs well (sic), never lets us down’.

A Queensland Police spokeswoman said no report had been made to police following the incident.