A four-cylinder engine in a Jaguar is nothing new.

The British marque might be better known for having thunderous V12 powerplants under the bonnet in the past but it’s been stuffing reduced-cylinder motors into its cars since the X-Type saloon arrived at the turn of the century.

However, this is the first time the brand with the leaping cat has plonked a four-pot into one of its sports cars. And not just any sports car – the glorious looking F-Type that until now has boasted a traditional Jaguar soundtrack of gargling V6 and V8 orchestras.

So the big question that needs answering is: when it comes to cylinders, is less really more? Rob Hull spent a week with the new 2.0-litre model to find out.

Is less really more? We spent a week at the wheel of Jaguar’s F-Type Convertible with the latest 2.0-litre 4-cylinder engine to find out if it’s worth the £56,000 asking price

Irrespective of what lurks beneath the traditional lengthy hood, the F-Type is – in my eyes – the best looking sub-£100,000 new car on the market today.

Parade your 2.0-litre Jag down the tarmac catwalk and even the modestly-trained eye will struggle to tell it apart from the V6 and V8 that have come before it.

So what’s the tell-tale sign for those not in the know?

The giveaway that you’ve scrimped on cylinders is the single exhaust outlet. Located centrally and in the shape of the kind of vacuum nozzle used to reach tight corners, it stands apart from the double oval exhaust tips of its gruntier siblings (positioned together centrally with the V6 and split for the V8).

While the entry-spec model does lack the outright ferocity of the V-mounted motors in the pricier pair, it still isn’t short on horsepower. Using the same Ingenium powerplant that’s already available in the XE and XF saloons and the F-Pace SUV, it produces a respectable 296bhp.

By today’s standards that’s merely hot-hatch territory. But two decades ago that would’ve trumped the 5.3-litre V12 engine in the XJ-S on sale at the time. 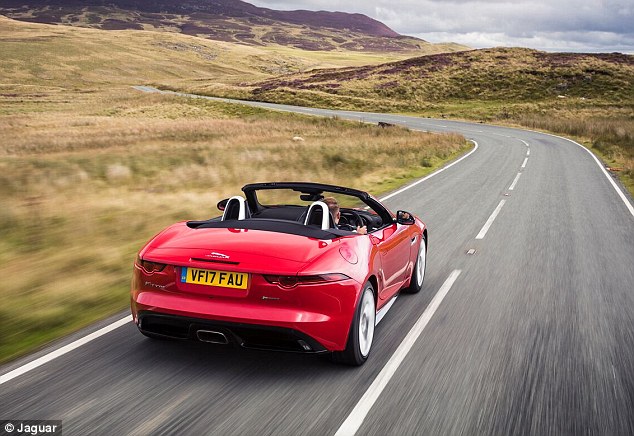 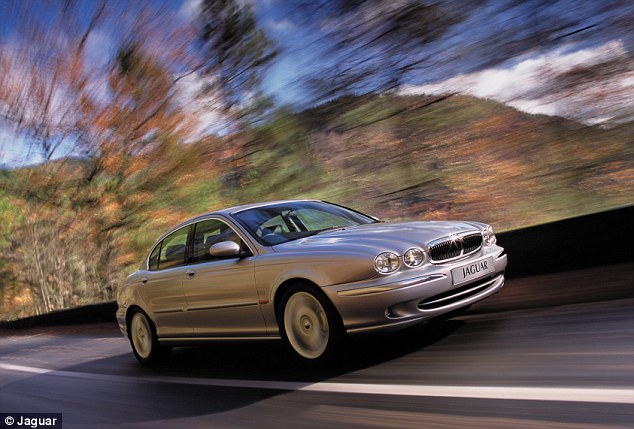 Jaguar only started using 4-cylinder engines in its cars in the early 2000s. In fact, the diesel X-Type (pictured) was the first to have a 4-pot engine

Why is Jaguar down-sizing engines?

Like every other car manufacturer, Jaguar must be feeling the increasing weight of Euro emissions standards on its shoulders.

Ministers are desperate for an electric-vehicle takeover – by 2040 in the UK – and automakers are expected to make their combustion-engined cars cleaner with every year and decade that passes, as low and zero-emissions targets creep closer.

Even for mainstream manufacturers, like Ford, Renault and Vauxhall with town-focussed small eco cars and spindly running costs, it’s an uphill battle.

For brands like Jaguar, where the mastery lies with high-performance luxury cars, it’s like trying to climb Everest in ice skates.

One of the easiest solutions to comply with these pollution regulations is for car makers to offer smaller-capacity engines to haul down the average emissions outputs of their range, thus keeping the likes of Chancellor Philip Hammond happy – for the time being anyway. 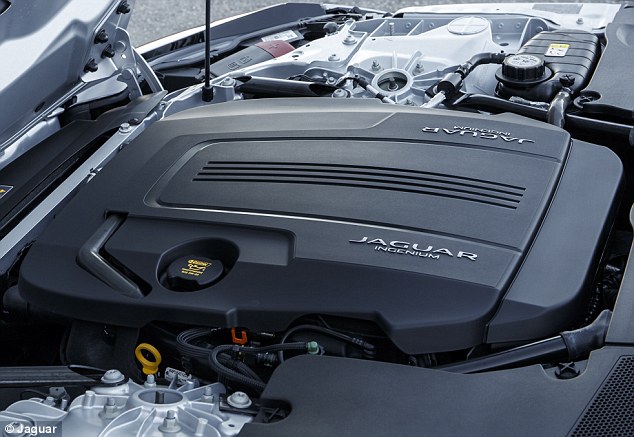 The Ingenium 4-cylinder engine – which is also available in the XE, XF and F-Pace – produced 296bhp in its highest state of tune

But we also shouldn’t underestimate cunning marketing when it comes to car selling.

Jaguar knows the F-Type is one of the most revered cars in showrooms today. Introduce a cheaper version and sales figures are almost certainly going to rise.

Is it a significantly more affordable F-Type then?

That said, it barely trims the asking fee of the lowest-priced V6-powered option. Stump-up an extra £3,000 and you can add an extra litre to the capacity of your engine and bask in six-cylinder chorus.

Like-for-like, there’s little to split the four and cheapest six in terms of on-paper performance and running costs, too. The V8 is almost twice as expensive to buy and run, however.

This suggests that Jaguar believes the 2.0-litre has something to offer other than a slightly more affordable passage into F-Type ownership. So should you pocket that extra £3,000 or stretch to a ‘proper’ V-powered Jag? 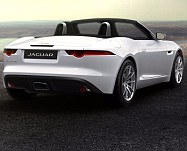 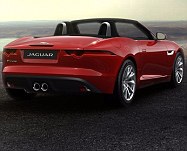 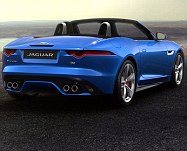 *All info based on F-Type Convertible models

The most manageable F-Type yet

Let me get one thing straight – I’ve never really categorised the F-Type as a full-on sports car before.

With the hefty V6 and V8 anchoring the front end, it isn’t the most fleet-footed two-seater on sale and tends to understeer as soon as that gorgeously sculpted nose gets the faintest whiff of a corner. It’s more of a burbling GT car than a hardened apex-clipper, if you ask me.

But this 2.0-litre version has changed all that.

With the new powerplant shaving 52kg off the weight of the six-cylinder car – the equivalent of slinging a flyweight boxer off the bonnet – and even more off the V8, the four-cylinder F-Type instantly feels more agile, especially in slower turns.

Getting out of a corner is easier too, thanks mainly to the sub-300bhp power output that’s made the performance more attainable to those that don’t possess the reflexes of Lewis Hamilton.

Punch the accelerator pedal at the exit of a bend and the rear tyres cling on for dear life, launching you out of the turn with barely a hint of drama.

Try doing the same in the 542bhp V8 F-Type with a smidgen of wheel angle applied and you’ll be greeted by bottom-clenching traction loss, leaving you no option but to pray to the motoring gods that there’s a stability control safety net to stop your near-£100,000 car from pirouetting in a cloud of rubber smoke. 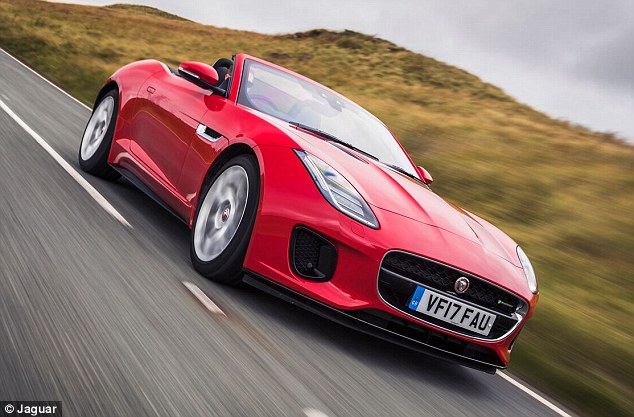 The 2.0-litre engine is far less intimidating than the 3.0-litre V6 unit and the almighty 5.0-litre V8. It makes the car that bit more usable and easier to drive quickly 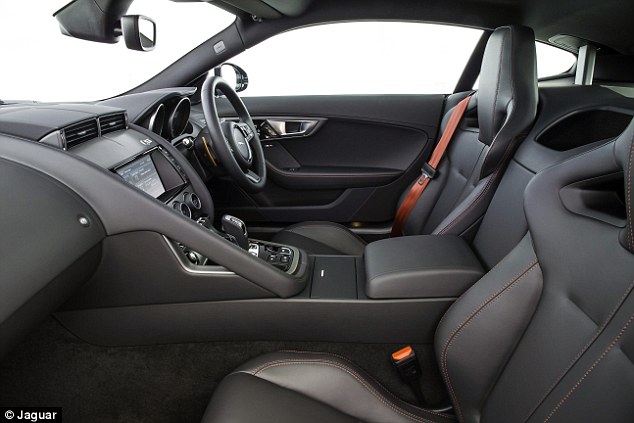 Inside, there’s very little to tell the car apart from the rest of the range. The engine sound is the biggest giveaway

So not only does the introduction of the four-pot engine make the F-Type sharper in corners, it also doesn’t intimidate a driver each time they prod it with their right foot.

That’s not to suggest it’s dull in any way.

Peak torque is available from just 1,500rpm, so the potential for it to pin you to the back of your seat when you floor the throttle from a standstill  very much still lurks.

Keep your foot in for longer and you can thrash the four-cylinder motor, enjoying the full potency that’s on tap without the worry of it snapping on you like an Alex Ferguson half-time team talk with his side four goals down.

It’s more compliant in town too, with the reduced power and weight complemented by plusher suspension springs that soak up some of the jolts and judders the V6 and V8 struggled to subdue. 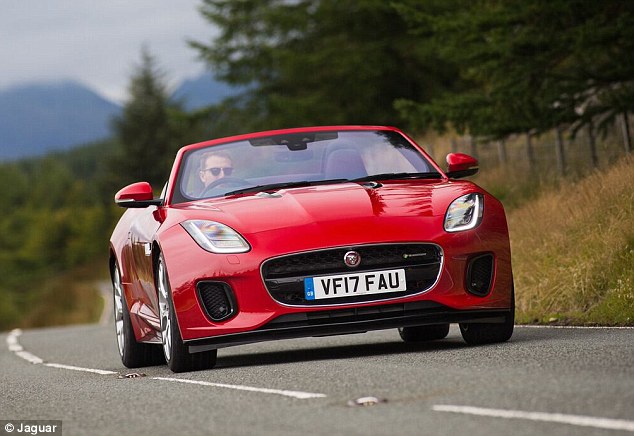 Peak torque is available from low down in the rev range, which helps the smaller engined F-Type accelerate from a standstill to 60mph in 5.4 seconds – just 0.3 seconds slower than a V6 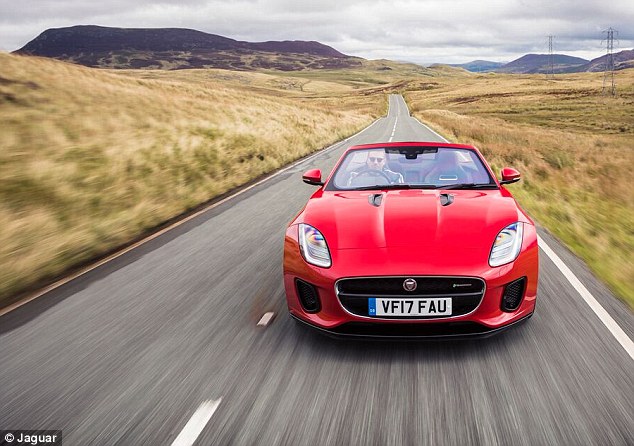 Jaguar has synthesised a decent engine rumble in the cabin, but when you put the roof down you quickly realise it doesn’t sound quite as good from the outside

It drives better, but how does it sound?

Car makers are a crafty bunch. Crippling emissions standards might mean they can no longer produce new booming V12s and characterful V8s that comply with Euro6 requirements, but they can still make you think you’re driving one by piping an artificial soundtrack into the cabin.

While Jaguar hasn’t tried to masquerade the new 2.0-litre engine as having twice as many cylinders, from inside it does appear to have a distinctly rorty soundtrack for a car with just four working away under the bonnet.

This sound becomes more exuberant when you engage the louder exhaust mode, which ramps up the volume and adds a few ECU-ordered crackles and bangs each time you lift your foot off the accelerator.

But there’s no hiding the reality of the engine note once you retract the F-Type convertible’s fabric canopy, much to my disappointment.

Roof up, occupants would be fooled into thinking it has the bark of a wound-up rottweiler. Roof down, you quickly realise it’s more bichon-frise with bronchitis. 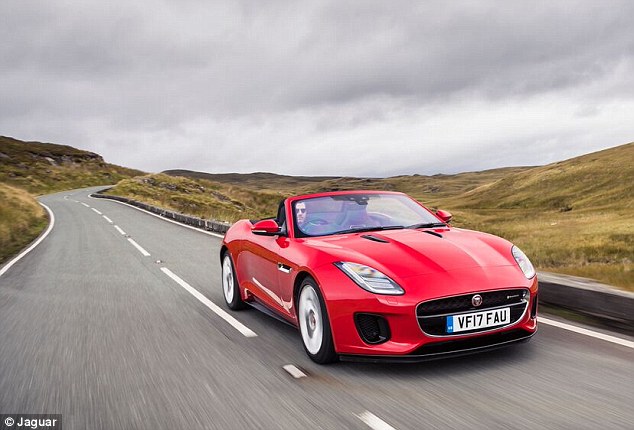 Buying the F-Type with a 4-cylinder engine will only save you around £3,000. So is it worth pocketing that extra cash or splashing out on a V-powered motor?

The question originally asked was: when it comes to cylinders, is less really more?

In terms of being able to exploit the performance, undoubtedly.

Is it as good as Porsche’s benchmark 718 Boxster and Cayman, both of which now also come with four-pot motors? I’d have to say no, but the disappointment of losing seconds to the German alternatives on track would be made up for by the admiring glances you’d get in the pit lane.

If I was lucky enough to be looking to blow around £50,000 on a stylish two-seater, I wouldn’t choose the Porsche… and I wouldn’t pick the four-cylinder Jaguar either. Because I’d stump up the extra £3,000 or so for the cruder V6 F-Type.

What it lacks in fine-tuned finesse it gains with a biblical exhaust rumble and bountiful power that you’ll never bore of trying to exploit on the road. The V8 R version is even shoutier and more of a struggle to tame, but the unwieldy beast will bowl you over for those reasons alone.

Ultimately, Jaguar’s fewer-cylinder F-Type is the easiest – and as a result, joyless – to drive, and that’s why I’d pay a little bit extra for an engine upgrade.