A drunk driver who was almost five times the legal limit when he flipped his car at a busy Gold Coast intersection has been sentenced.

Glenn Michael Camilleri, 45, pleaded guilty to dangerous operation of a vehicle while affected by alcohol when he appeared in Southport Magistrates Court on Friday.

It’s the fourth time Camilleri has lost his licence due to high range drink driving, the Gold Coast Bulletin reported.

Terrifying CCTV of the shocking crash on December 28 last year on the Gold Coast Highway at Palm Beach has since been publicly released.

The footage shows the lead up to the horrifying moment when Camilleri’s car became airborne as it flipped across the highway, slammed through a fence and landed on top a blue ute waiting at traffic lights at the intersection of Thrower Drive.

Motorists and nearby residents can be seen in the CCTV rushing to help following the frightening impact.

Remarkably, no one was injured, despite Camilleri narrowly missing a family on the side of the road

Police prosecutor Senior Constable Rachel France told the court witnesses noticed Camilleri could not speak or stand properly as they helped him from the wreckage.

He recorded a blood alcohol reading of 0.243. 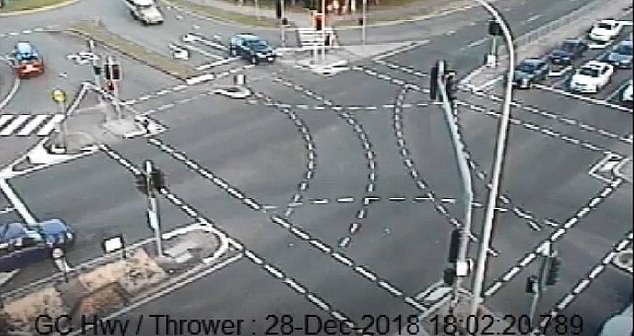 Moments after the car became airborne as it flipped across the highway, slammed through a fence and landed on top a blue ute (pictured) waiting at traffic lights

Camilleri’s lawyer Sam Jackson told the court his client had battling with an alcohol addiction his entire adulthood and had relapsed the day he crashed.

‘All the remembers is going for a hair cut in the morning and he can’t remember anything until he gets pulled out of the car,’ he said.

Camilleri was sentenced to 14 months prison and will be released on parole in October. 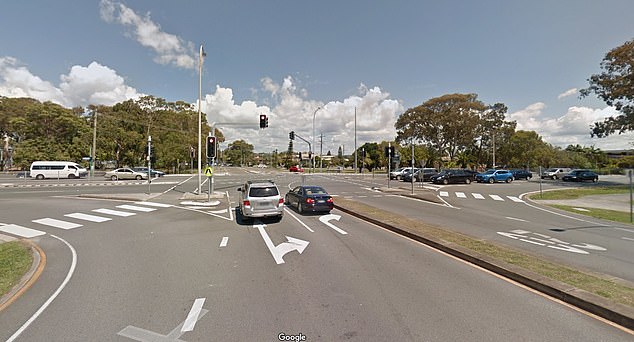 ‘I consider the driving to be extremely reckless,’ magistrate Mark Howden said.

Camilleri also had his licence suspension for three years.

Advocate Kylie Franklin, whose friend was killed by her drunk husband in a crash in 2017 believes anyone convicted of drink driving more than three times should never be allowed to get behind the wheel of a car again.

‘I think they need to come down harder because people are not getting the message,’ Ms Franklin said.