A jail administrator resigned for not taking his wife’s mugshot after she was charged with assault for threatening four black teenagers with a gun.

Joe Kelly, who works at Cross County Jail in Arkansas, was reportedly accused of ‘favoritism’ for not taking his wife Jerri Kelly’s mugshot following her arrest on Monday.

Sheriff David West said Jerri Kelly had a medical issue during her booking at the jail on Monday. She subsequently returned on Thursday and her picture was taken then.

He told the Arkansas Democrat Gazette: ‘Joe did nothing wrong, but with his wife and the way this blew up, he decided it was best.

Joe Kelly, (pictured), who works at Cross County Jail in Arkansas, was reportedly accused of ‘favoritism’ for not taking his wife Jerri Kelly’s mugshot following her arrest on Monday 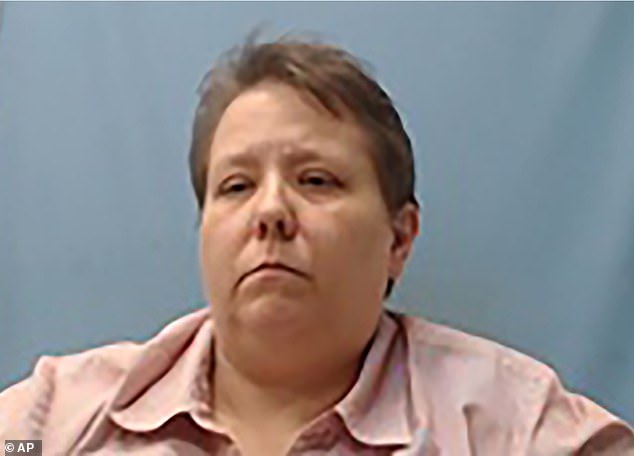 Jerry Kelly (pictured), 46, was arrested after pulling a gun on four black teenagers who were going door to door selling coupons to raise money for the local football team

West claimed that news of the arrest ‘blew up’ on social media because there was no mug shot of her on the jail’s website.

‘There’s nothing shady here, how this has blown to this proportion over her photo not being there is beyond me.’

West said the Kellys live in one of his rental houses and that Joe Kelly was planning to buy the house from him.

Kelly was charged five days after she held a gun on four black teenagers who were going door-to-door to raise money for the high school football team.

She called law enforcement on August 7 to report ‘suspicious persons’, according to authorities.

The persons in question were four teenagers from Wynne High School, who were going door-to-door selling restaurant coupons to help raise money for the football team.

Two of the four boys were wearing their football jerseys during the incident, according to the Wynne School District.

The 46-year-old allegedly drew her gun and ordered the boys to lay on the ground. 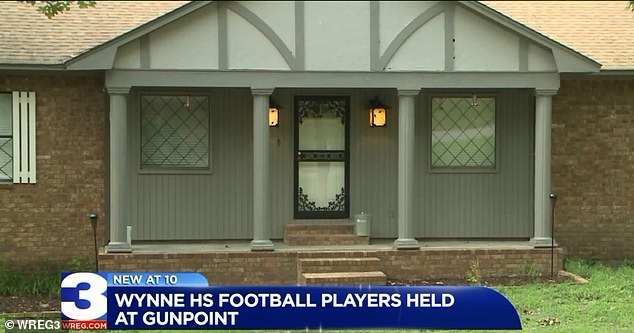 Kelly called authorities to report ‘suspicious persons’ on August 7 in Wynne and proceeded to hold four teenagers at gunpoint outside her home, pictured, until authorities arrived

When authorities arrived, they found the four teenagers on the ground with their arms behind their backs and Kelly standing over them with a gun.

The responding police officers let the children stand up and took them home.

Kelly was arrested five days later with four counts of aggravated assault, false imprisonment and endangering the welfare of a minor, WREG reported.

She attempted to justify her actions by claiming she heard a dog barking and the boys walking through the neighborhood.

According to a police report seen by CBS, she feared for her safety after a previous home invasion. 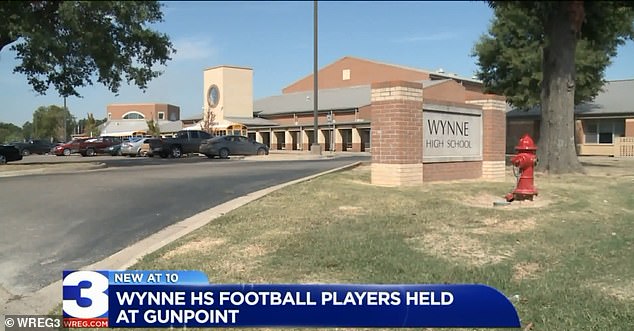 The teenagers went to Wynne High School, (pictured), who were going door-to-door selling restaurant coupons to help raise money for the football team 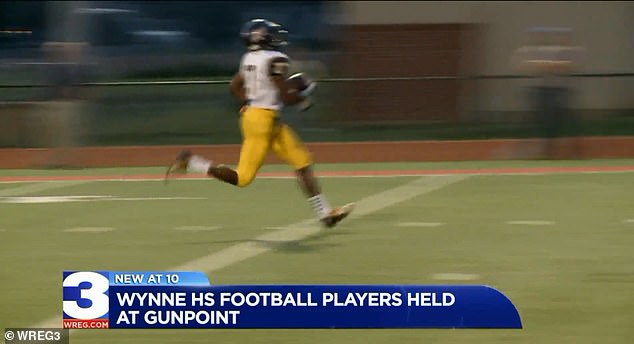 After the altercation, the Wynne School District is considering stopping door-to-door fundraisers to keep students safe. Pictured is a play by the Wynne High School football  team

She then pointed to the boys’ skin and her own, and said, ‘It ain’t about that.’

‘Be smart about it boys. Please. It’s your life you’re talking about. Don’t be silly about it.’

She later insisted that she ‘felt remorse’ and asked to get in touch with the teenagers to pay for their lunch and ‘put some closure on this.’

Cross County Sheriff’s Department Captain Jeff Nichols said the mugshot of Kelly was not taken on Monday after her arrest because she had a ‘medical emergency.’

Nichols said: ‘She was afforded the same booking process and procedures as anyone that’s brought into our facility. She received no preferential treatment.’

The Associated Press reported that the Wynne School District Superintendent Carl Easley said ‘the district is considering stopping door-to-door fundraisers’ in light of the incident.