Jailed – the people smuggler who was tracked by drone: Iraqi, 36, was filmed by ‘eye in the sky’

The first people smuggler convicted using evidence from surveillance drones over the Channel was jailed yesterday.

Rebwar Ahmed, 36, was filmed by an ‘eye in the sky’ unmanned aircraft at the helm of a rigid-hulled inflatable boat crossing from France.

The Iraqi’s conviction came as the Daily Mail was granted exclusive access to the nerve centre controlling the Channel surveillance drones.

Rebwar Ahmed, 36, was filmed by an ‘eye in the sky’ unmanned aircraft at the helm of a rigid-hulled inflatable boat crossing from France

Surveillance images from the drones help co-ordinate rescues of migrants at sea but are now also being used to prosecute people smugglers at the helm of the small boats.

In his first newspaper interview since his appointment by Home Secretary Priti Patel last month, he also revealed the Government is ‘very close’ to securing a new deal with the French which, it is hoped, will lead to tougher action on the other side of the Channel to prevent the boats setting off.

‘The surveillance footage we’ve captured has been absolutely critical to proving who was driving the boats and quite often we arrest that person as they step off the boat in Dover, and we prosecute them,’ said Mr O’Mahoney.

‘The evidence we get from the drone is so strong that they often plead guilty at a very early stage. 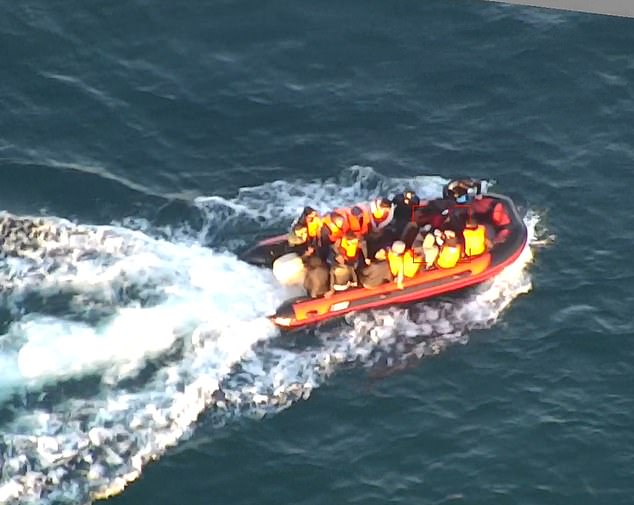 ‘It’s previously been very difficult to prove to a court that the person who’s driving the boat was playing a key role but now we often have video evidence of them doing that all the way across the Channel.’

Ahmed was at the tiller of the boat carrying 20 other migrants on July 12.

The vessel was followed by the remote-controlled drone for 36 minutes, then intercepted by a Border Force coastal patrol boat around halfway through the crossing.

All passengers were photographed as they disembarked for processing in Dover, where Ahmed, who was carrying a mobile phone and lock knife, was identified as the person in control of the boat.

He previously admitted a charge of assisting unlawful immigration during a hearing on August 21. He was sentenced to 31 months’ imprisonment at Canterbury Crown Court yesterday.

Jailing him, Judge Mark Weekes said: ‘You and those on board the craft were attempting to leave a safe country, France, to enter another safe country.

‘The drone footage reveals that you are the only person in control of the boat.’

The drone’s cameras repeatedly zoomed in on Ahmed at the tiller before the backdrop of the White Cliffs of Dover came into shot.

Don Ramble, prosecuting, told the court: ‘All on board made an application for asylum but none have left the UK.

The majority of those asylum claims are still outstanding. Six have been refused.’

James Burke, defending, said the case was humanitarian rather than commercial. 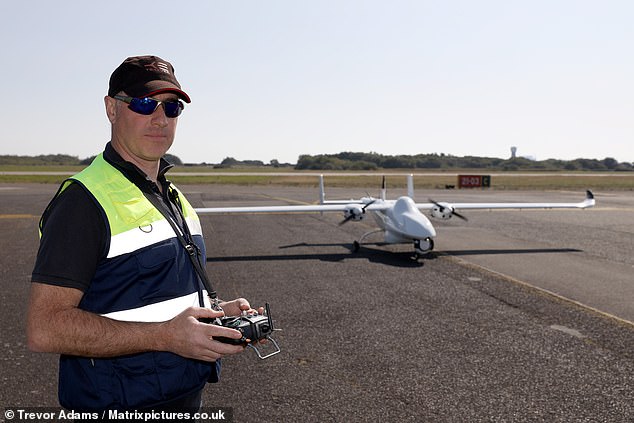 Ahmed said in interview he paid 1,000 euros (£915) for the crossing but was unable to name the organisers.

His journey was filmed by a drone operated by civilian contractor Tekever, which works alongside the Army’s Watchkeepers from Lydd Airport.

Miss Patel wants to seal an agreement with the French that will allow boats to be turned around in the Channel and for them to accept more failed asylum seekers back from the UK.

But Mr O’Mahoney said France had so far given a ‘flat no’ to accepting boats at its ports after British patrols intercept them.

Separately, he added the Home Office is ‘very close’ to signing an agreement with France to allow more land, sea and air surveillance on the other side of the Channel.

The Watchkeeper drones, which have a 36ft wingspan, typically fly seven-hour sorties but can remain airborne for up to 14 hours and cruise at almost 90mph.

More migrants have reached Britain via the Channel so far this month than in the whole of last year.

Despite pledges by Home Secretary Priti Patel to make the route ‘unviable’, 393 made their way here on Tuesday – the second-highest total this year.

The numbers would have far surpassed the 416 who arrived in Britain on September 2 had the French authorities not prevented at least 98 by destroying their boats in the Calais area.

The Home Office yesterday revealed that Border Force officials intercepted 26 boats on Tuesday and brought to shore the occupants, including babies and children.

The huge influx – coupled with a shortage of accommodation owing to the pandemic – forced the Home Office this week to open two migrant ‘camps’ to house those waiting for asylum claims to be processed.

The Government says the move could save taxpayers up to 50 per cent of the cost of placing migrants in hotels.

Yesterday, men bussed into a former Army barracks near Folkestone in Kent described Britain as a ‘wonderful place’.

They are free to come and go as long as they return by 9pm, which has caused consternation among some residents who thought they would be detained.

YouTube ‘activists’ have been patrolling the site, known as Napier Barracks, and uploading footage online.

Amid increasingly ugly scenes, police were called ‘traitors’ and some migrants were followed and filmed as they left the camp to explore the area.

Large protests broke out at the other site, a former Army training centre near Tenby on Monday night, prompting Welsh first minister Mark Drakeford to claim it was a target for hard-Right extremists.