Jair Bolsonaro is filmed in foul-mouthed rant in cabinet meeting

An expletive-filled video of Brazil’s far-right president Jair Bolsonaro raging at his enemies has sparked outrage in the country as it battles the world’s second-largest coronavirus outbreak.

Brazilian media counted 31 presidential swear words during the two-hour cabinet meeting, in which Bolsonaro called two governors who imposed lockdowns a ‘piece of s**t’ and a ‘pile of manure’ respectively.

One pundit raged at Bolsonaro for ‘never mentioning the pandemic as a problem that concerns him’ in a two-hour meeting littered with obscenities.

Brazil now has 363,211 confirmed virus cases – more than Russia, and second only to the United States – while the death toll is now above 22,000.

Footage of the meeting was released by the country’s supreme court as part of a probe into Bolsonaro, who is accused of interfering in the federal police.

Bolsonaro is heard saying that he would not ‘wait for my family or my friends to get screwed’ by his inability to fire officials – but he denies wrongdoing and claims he was referring to personal security staff.

Yesterday Bolsonaro hit the streets for a rally with his supporters, breaking social distancing measures even as case surge.

The meeting on April 22 came when Brazil already had nearly 50,000 cases, but Bolsonaro and his cabinet barely mentioned the pandemic.

Footage of the meeting has triggered an outcry in Brazil amid growing anger at the government’s handling of the health crisis.

One of the few mentions of the pandemic was when a minister said the government should use the opportunity to relax environmental protection rules.

‘Brazil is going through its worst crisis in decades, and the president never mentions the pandemic as a problem that concerns him. The absence is shocking.’

In the video, Bolsonaro rails against the federal police for failing to give him information and says, ‘I’m not going to wait for them to screw my family and friends.’

Bolsonaro denies trying to stifle investigations, and said the video proved the accusations against him were a ‘farce.’

In a radio interview with Jovem Pan, he said he had been talking about his own personal security and not senior members of the federal police.

Analysts generally agreed the video, which was released by Supreme Court justice Celso de Mello, did not contain a ‘smoking gun’ to incriminate the president.

However, the material could be politically damaging as Bolsonaro faces growing disapproval ratings 18 months into his four-year term. 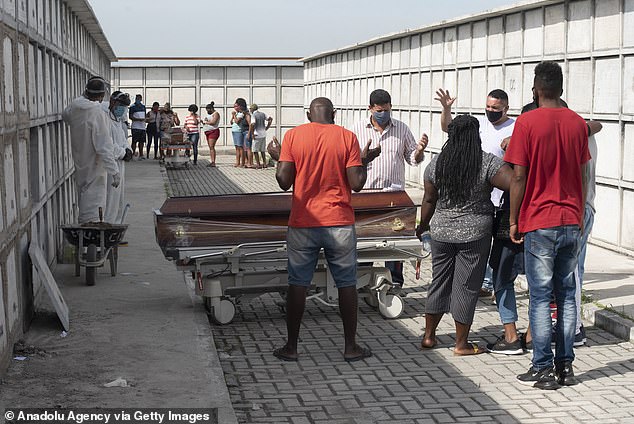 Bolsonaro called two state governors a ‘piece of s**t’ and ‘pile of manure’ for defying him by imposing coronavirus stay-at-home measures.

His education minister called for Supreme Court justices to be thrown in jail for giving states the final say in the matter. Another minister said governors and mayors should be arrested.

Turning to diplomacy, his economy minister called China ‘that guy you just have to put up with’ because it is Brazil’s biggest export destination.

Brazilian media counted 39 swear words in all, including 31 by the president, and there was widespread condemnation of the meeting’s tone.

‘It showed the vulgarity of the current government. They are like barbarians throwing the country into chaos, disrespecting the law and ignoring the constitution,’ opposition parties said in a joint statement.

‘The Bolsonaro government wasn’t made to govern. It’s a militant government that’s here to implement a conservative agenda, not run the country,’ he said.

‘The only minister to mention Covid-19 was the environment minister.’

That mention generated further controversy, because the minister said: ‘Now that the media’s only talking about Covid, we need to use this moment of calm… to change all the regulations.’

That was widely taken as a call to open protected land in the Amazon rainforest to mining and agriculture – something Bolsonaro has aggressively pushed.

Salles said on Saturday that he only meant that the government should try to cut red tape, but environmental groups were doubtful.

‘It became clear that the role of the environment ministry is to dismantle any environmental protection we have in the country,’ said Erika Berenguer, an Amazon ecologist at Oxford and Lancaster Universities.