‘I’m very grateful that I’m alive’: Cyclist Fabio Jakobsen thanks trauma doctors for saving his life after Dutchman’s horror-crash at Tour of Poland left him in a coma

Fabio Jakobsen has explained his relief at merely being alive after the Dutchman’s frightening crash at the Tour of Poland left him in an induced coma.

The Deceuninck-QuickStep star’s high-speed vault over the finish line barriers in Katowice had viewers recoiling after the talented sprinter’s collision with rival Dylan Groenewegen.

The 23-year-old woke up from a coma two days later still requiring facial surgery and now faces a long road to recovery before thinking of reigniting his Tour de France stage-winning dreams. 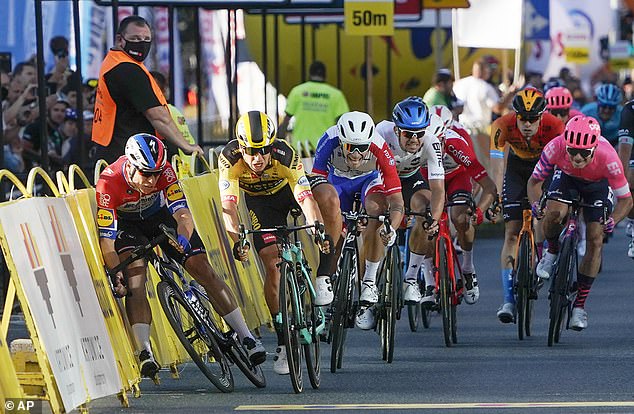 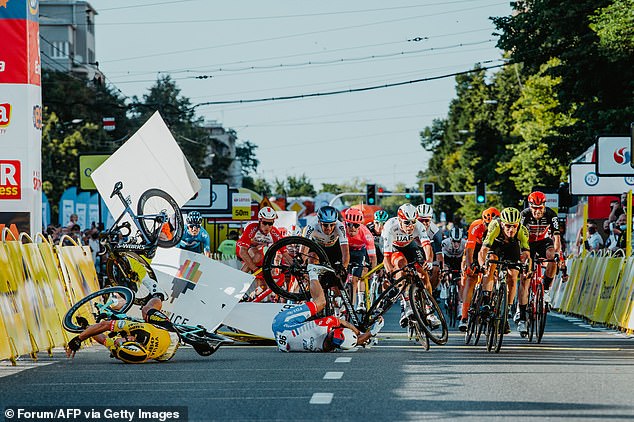 ‘The trauma doctors and nurses at the finish line in Katowice saved my life, for which I am extremely grateful to them,’ the Dutch national champion has said.

‘It was a difficult, dark period for me in the ICU, where I was afraid of not surviving

‘They immediately operated on me for five hours and gave me the chance to live. I am very grateful to all employees of this hospital.

‘I want to let everyone know that I am very grateful that I am still alive. All the messages and words of support have given me tremendous strength. 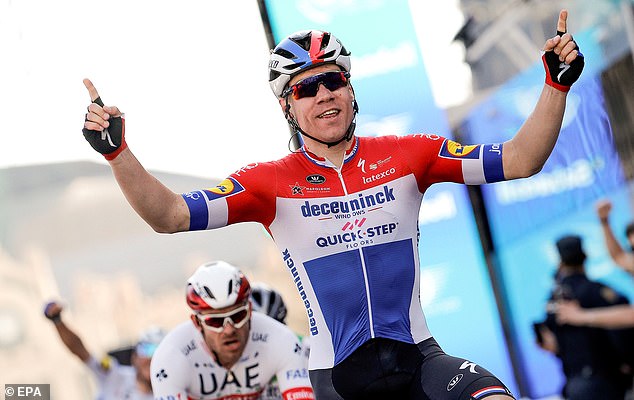 Jakobsen is one of cycling’s up-and-coming sprinters, yet to make his Tour de France debut

‘Step by step I can slowly look to the future, and I will fight to recover. I am at home, where the wounds in my face and my injuries can continue to recover.’

Jakobsen added that he will be requiring more surgery on his facial wounds as well as being forced to rest after ‘severe concussion’.

Groenewegen crossed the line in first place but was disqualified before being suspended from racing by his Jumbo-Visma team, as he heals from a broken collarbone while the sport’s governing body, the UCI, decide on his punishment. 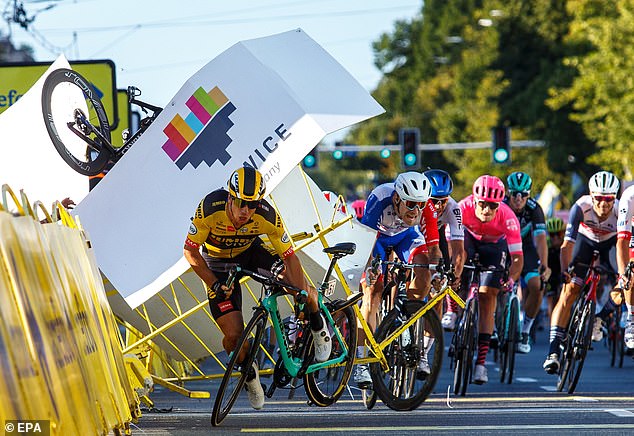 Groenwegen (left, in yellow) sparked outrage with his move and is suspended from racing

Riders are required to sprint in a straight line after launching their final surge and Groenewegen’s dangerous move to block the onrushing Jakobsen  – who was set to pass his countryman and take victory – sparked outrage.

The Jumbo-Visma star responded: ‘I can’t find the words to describe how sorry I am for Fabio and the others who crashed or were involved.

‘What matters most now is Fabio’s health. I think about him all the time.’