The Jamaica Bobsleigh Team has accepted an apology by a group of men who ‘blacked-up’ their faces for a float depicting the Jamaican bobsleigh team.

The men had donned black face paint and built a float based around the 1993 comedy film, Cool Runnings, for the annual Bank Holiday carnival in the seaside resort of Aberaeron, West Wales, on Monday.

The decision by organisers to allow the float into the procession provoked fury from the local Labour Party in Ceredigion which described it as ‘racism – pure and simple.’

But the men reached out to the actual Jamaica Bobsled Team to apologise – and make a ‘generous donation. 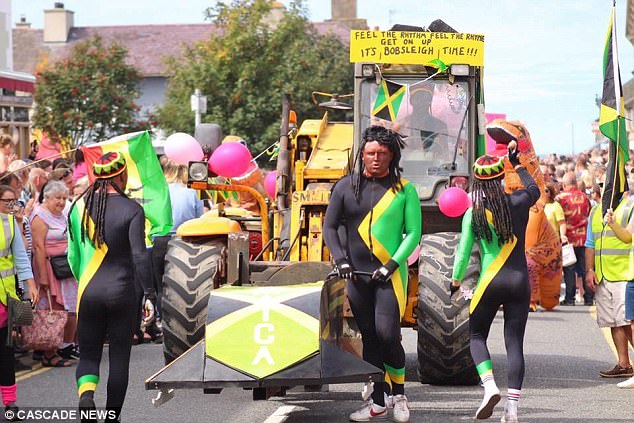 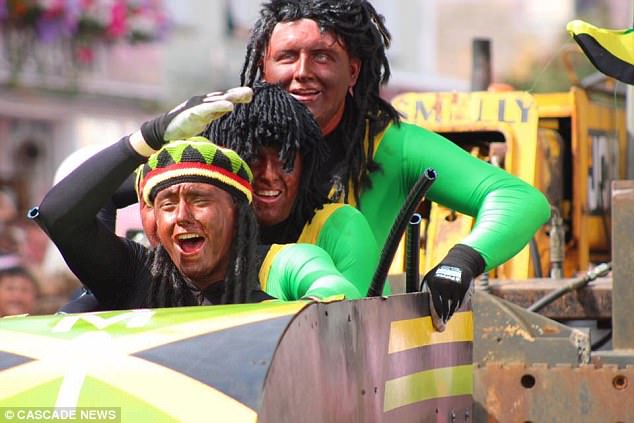 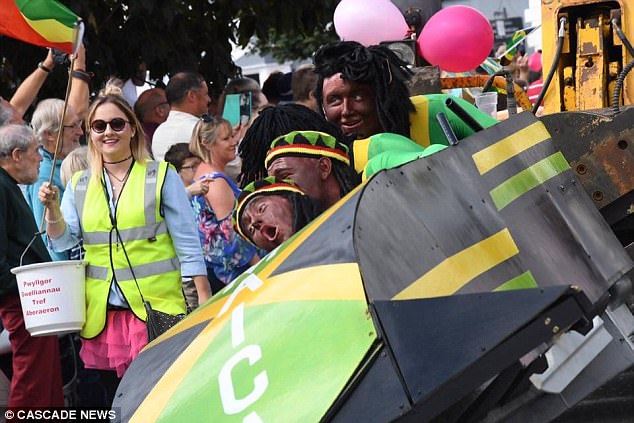 The bobsled team wrote: ‘Members from the “Cool Runnings” inspired float reached out to us today, to offer their apology and insensitivity, of wearing “black face”.

‘We like to take these opportunities to educate, rather than vilify. We believe there was no malice intended.

‘We also thank them for their generous donation, in support of our team.’

It comes after police confirmed they were investigating the controversial float.

And in a post on Facebook, Labour candidate Dinah Mulholland said she was ‘utterly horrified’ by the float. She added: ‘How could this have been considered acceptable, or even legal, by the carnival organisers?’

While some commended her stance, Mrs Mulholland’s comments were also derided by hundreds of others on social media, who branded her a ‘clown,’ described her as ‘pathetic’ and called for her to ‘get a grip.’ 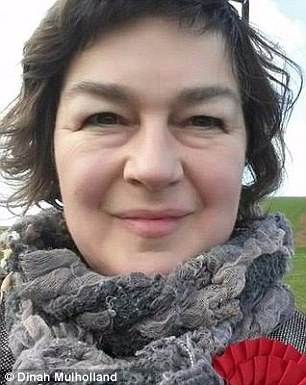 Carnivalgoer Hayley Savers posted: ‘Aberaeron carnival was yet again absolutely fantastic and all that took part should be immensely proud.

‘To try to turn, what was seen by most as people dressing as fictional characters into a row on racism for your own political gain is pathetic and has seemingly backfired.

‘The only thing that has been achieved here is actually encouraging hate….mainly towards the Labour Party!’

Stuart Ramsden said: ‘No offence was meant. Carnivals are supposed to be fun. These guys are just celebrating one of the greatest films of all time.’

‘What’s the problem it’s not racist in any way … it is celebrating several aspects of a sporting team and the problems they went through.’ 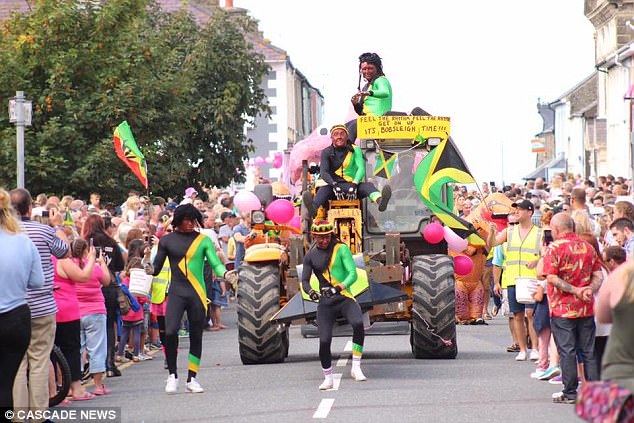 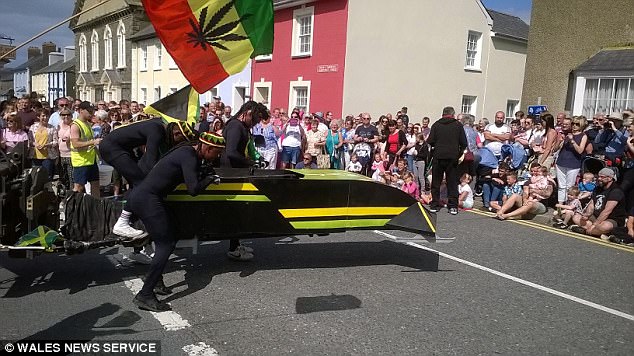 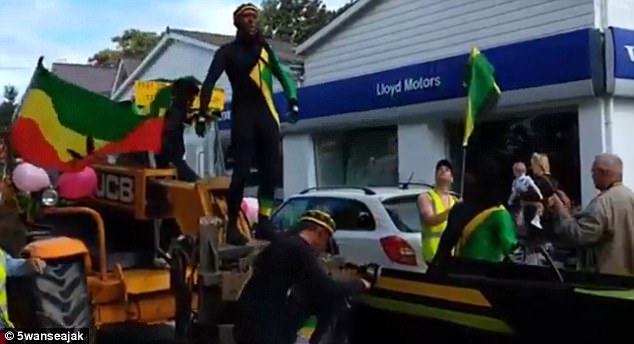 Dyfed Powys police confirmed they were investigating following a report of a ‘perceived hate crime’ at the carnival.

Elizabeth Evans, a Liberal Democrat councillor in the resort, said she was ‘100 per cent certain’ no offence was intended, although she admitted she knew the float would provoke controversy.

‘It is not for me to define what is and what is not deemed as racist,’ she said. ‘But were those lads on that float being racist? Absolutely not. 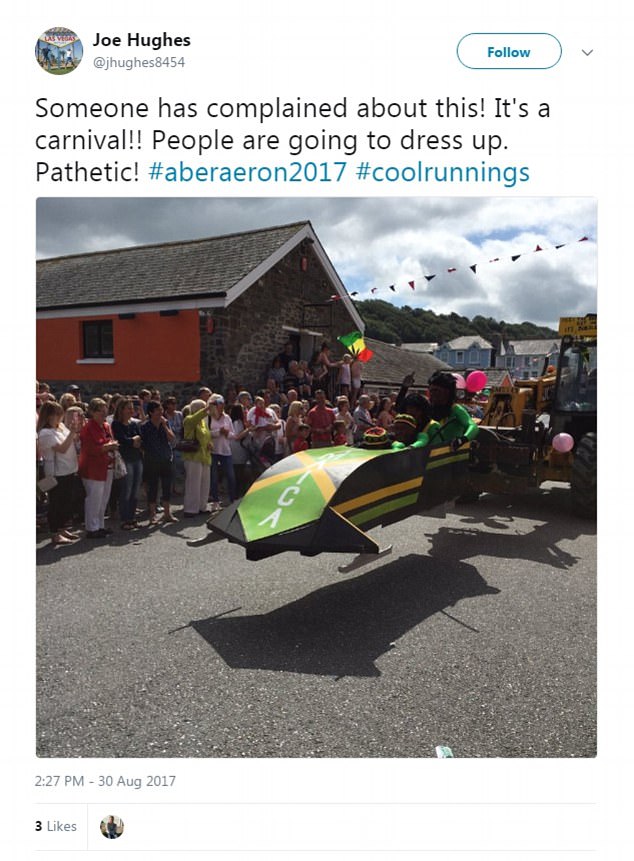 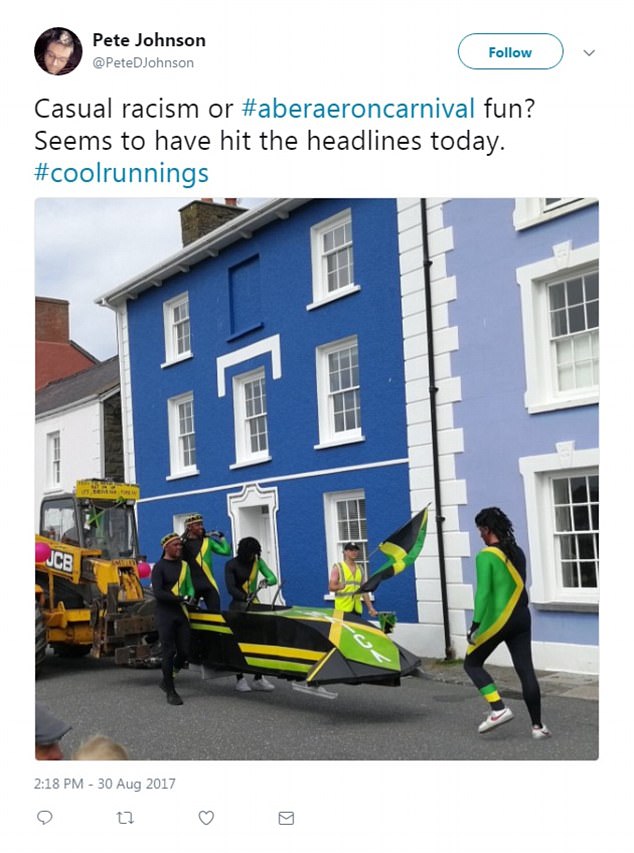 The stunt provoked debate online, with some outraged with it and others calling the fury ‘pathetic’

‘They were merely depicting what was a very popular film and the reaction of the crowd showed they appreciated the effort that had gone into the float. 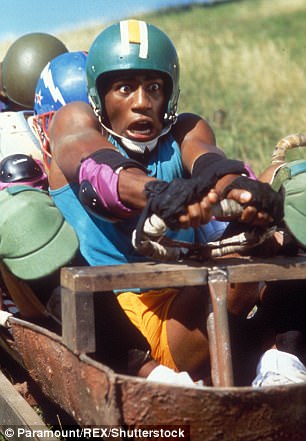 In the film Cool Runnings, four athletes want to become Jamaica’s first bobsleigh team to compete in the 1988 Winter Olympics

‘It’s just a shame that it has resulted in this backlash, because they were not being racist at all. At worst it was a naïve act.’

Video footage from the procession shows the men, with blacked up faces, dread-locked wigs and dressed in black Lycra bobsleigh outfits, dancing and larking about in front of the watching crowds.

In a statement the Labour Party said that, even if no offence was intended, the float was ‘unacceptable’ and in danger of normalising ‘casual racism.’

‘It was completely unacceptable for the participants to blacken their faces and put on curly wigs, in a ‘humorous’ caricature,’ a spokesman said.

‘This is racism, pure and simple, whether intentional or not and at best suggests that those responsible are unaware of the appalling history and associations of ‘blacking’ up. 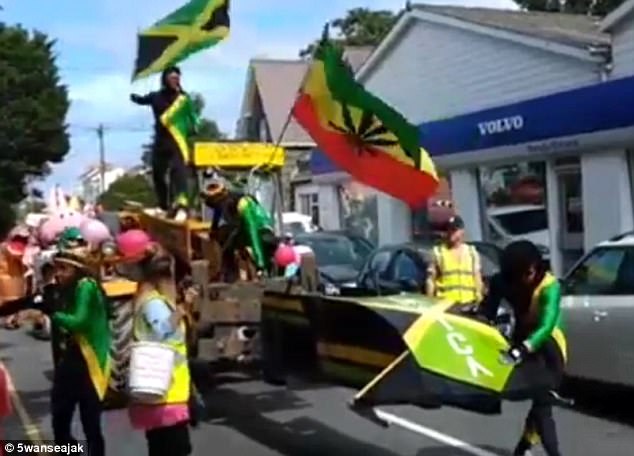 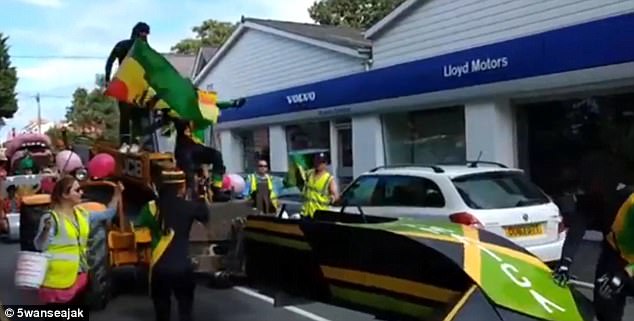 Some residents backed the revellers and slammed Miss Mulholland for ‘overreacting’ 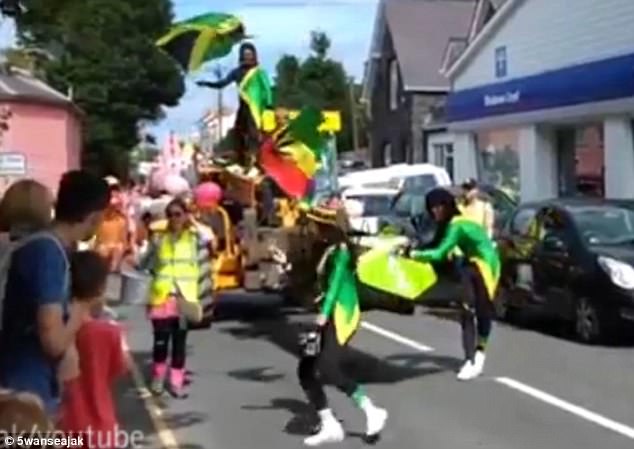 ‘There may have been no conscious agenda or racist intent towards involved people of African or Caribbean heritage in the Cool Runnings float, but there is no doubt that offence has been caused and that there is a danger that unchallenged, such behaviour makes casual racism seem okay.’

The organisers of the carnival, which is run by volunteers, failed to respond to the Daily Mail’s request for comment.

Cool Runnings is based on the real life story of Jamaica’s first bobsleigh team to compete at the 1988 Winter Olympics.

Denfer Morgan, clerk to the Aberaeron Town Council, told MailOnline today: ‘The Council has received one e-mail from an individual expressing concern about the ‘Cool Runnings’ float at the Aberaeron Carnival on Bank Holiday Monday.

‘The e-mail has been acknowledged and the author advised that that it has been forwarded to the organisers of the event, namely the Aberaeron Town Improvements Committee for their attention.’