Actress Jameela Jamil has come under fire for posting peanut butter snacks online, despite previously telling fans that she has a peanut allergy.

The Good Place actress, 33, was embroiled in a series of controversies this week over conflicting stories she’s given on accidents she’s had in the past, leading some critics to accuse her having Munchhausen syndrome or fictitious disorder – illnesses where people make up health scares for attention.

Several days ago Jamil posted an Instagram story eating peanut butter filled pretzel bites, which sparked backlash from her followers because she previously claimed she suffers from a peanut allergy.

Jamil addressed the critics on Twitter late Wednesday saying her allergies ‘cleared up’ as she got older.

Jamil has spoken at length about her various allergies and discussed how she’s not only allergic to peanuts, but she also can’t eat shellfish and is Celiac, meaning she can’t eat gluten.

Actress Jameela Jamil has come under fire for eating peanut butter filled snacks, despite previously telling fans that she has a peanut allergy 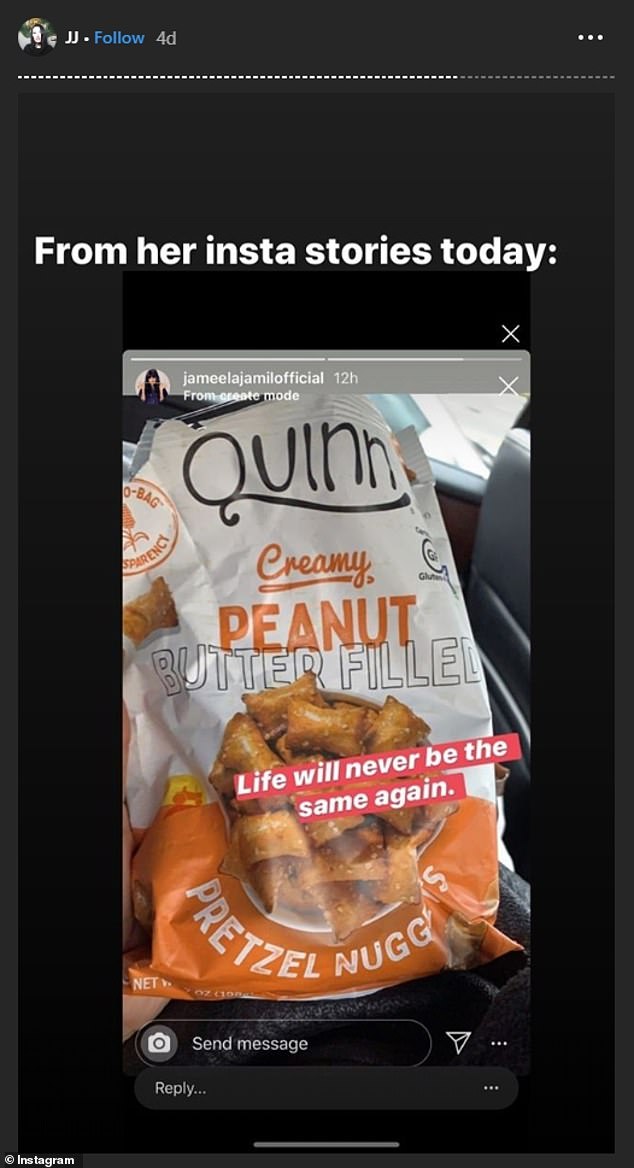 Jameela shared this post on Instagram raving about Quinn peanut butter filled pretzel nuggets. The post led followers to call her out because she claimed prior that she had a peanut allergy 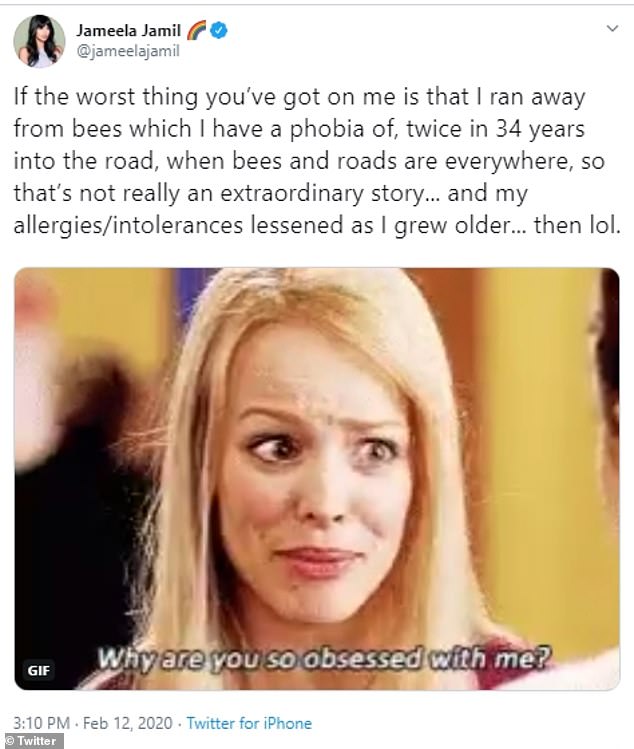 ‘I have loads of food allergies. I was born allergic to shellfish and peanuts and when I was about 12 I was diagnosed as Celiac but didn’t understand at 12 what that really meant so I would just secretly eat cake and faint and feel ill and that went on for about nine years,’ she in an interview with Holland & Barrett in 2016. 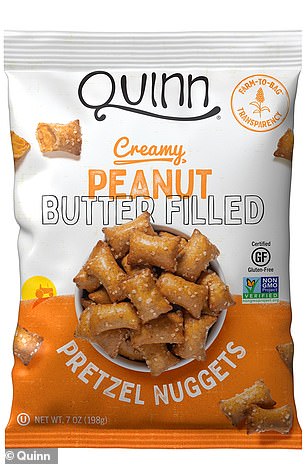 ‘…until I turned 21 and I had developed mercury poisoning from silver filings and those meant that I developed load of allergies and intolerances that became so serious that I was at times unable to work because my face would swell up,’ she added.

‘i want to believe you but can you explain the allergies please?’ one fan asked.

‘Yep. Mercury poisoning in my twenties. Had 11 fillings removed and my stomach lining was damaged for a decade. Got loads of weird food allergies that cleared up as I healed my gut. Next question,’ Jamil answered.

The peanut allergy fiasco was just one of several squabbles Jamil faced on Wednesday.

An online troll shared a lengthy Instagram story accusing the star of faking health issues and accidents for attention.

That troll posted screenshots of conflicting interviews and accounts that Jamil shared on those incidents. 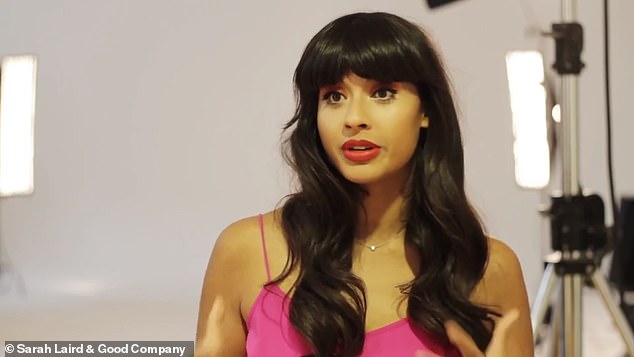 ‘I have loads of food allergies. I was born allergic to shellfish and peanuts and when I was about 12 I was diagnosed as Celiac but didn’t understand at 12 what that really meant so I would just secretly eat cake and faint and feel ill and that went on for about nine years,’ she in an interview with Holland & Barrett in 2016 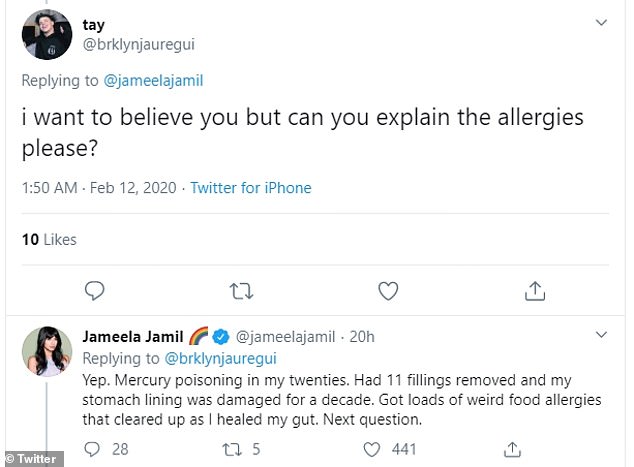 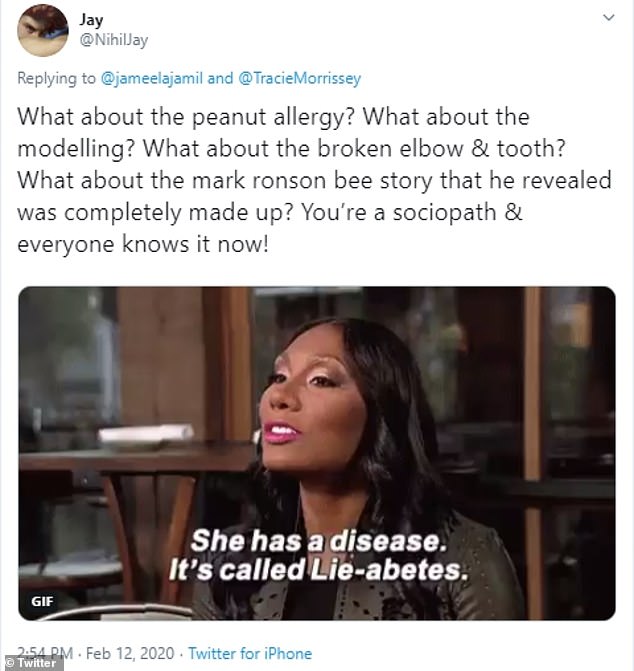 The troll claimed Jameela’s ‘contrasting’ version of events regarding a car crash and breast cancer scares led them to believe she suffered from Munchausens.

On one occasion, the online user said that Jameela had exaggerated her injuries from a car crash where she claimed she broke her nose, elbow, lost a tooth and had concussion.

However footage from the incident revealed that she appeared without any injuries and still had a full set of teeth in place.

Yet Jameela was quick to fire back at the allegations, as she described the theories as ‘unhinged’ before revealing that the injuries she described were from a separate car crash 13 years apart.

Taking to Twitter to express her outrage, Jameela penned: ‘First I’m lying about my sexuality, now I’m now being accused of munchausens?

‘By an unhinged idiot who didn’t even realize in all her ‘research’ that my car accident injury stories are ‘different’ because they were about TWO SEPARATE CAR ACCIDENTS 13 years apart? You can keep it.’

Jamil referred to two car accidents in that tweet – one when she was 17 and another during filming season one of the Good Place.

In November Jamil told Cosmopolitan that she suffered a car accident that ended her modelling career and landed her in the hospital.

In the second accident she claimed she suffered a concussion and a broken tooth but still continued filming.

The online troll also posted various screenshots of tweets where Jamil claimed she was never a model. 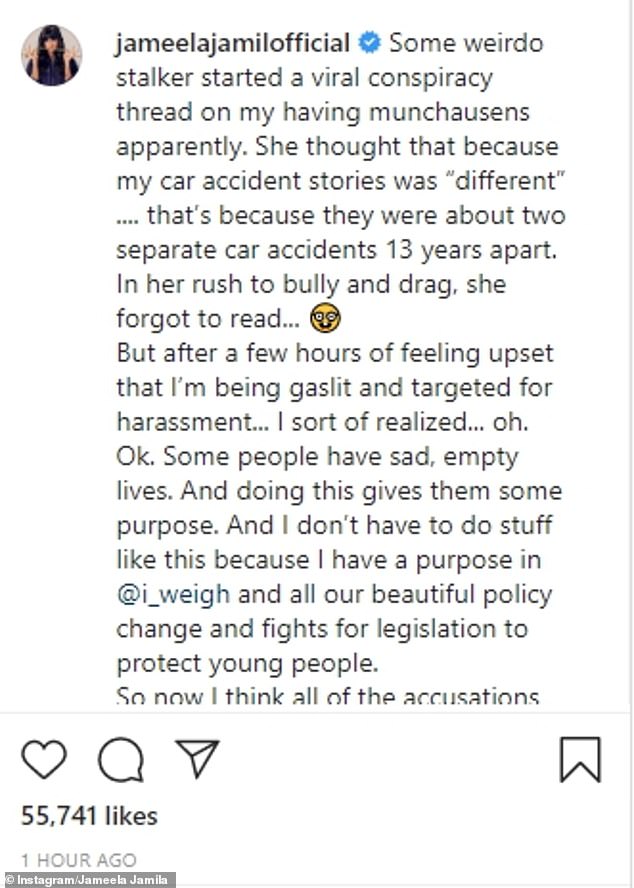 The peanut allergy fiasco was just one of several squabbles Jamil faced on Wednesday after an online troll accused her of lying about getting hit by cars and chased by bees and posted screenshots of conflicting interviews she’s given. Jamil posted this Instagram in reply 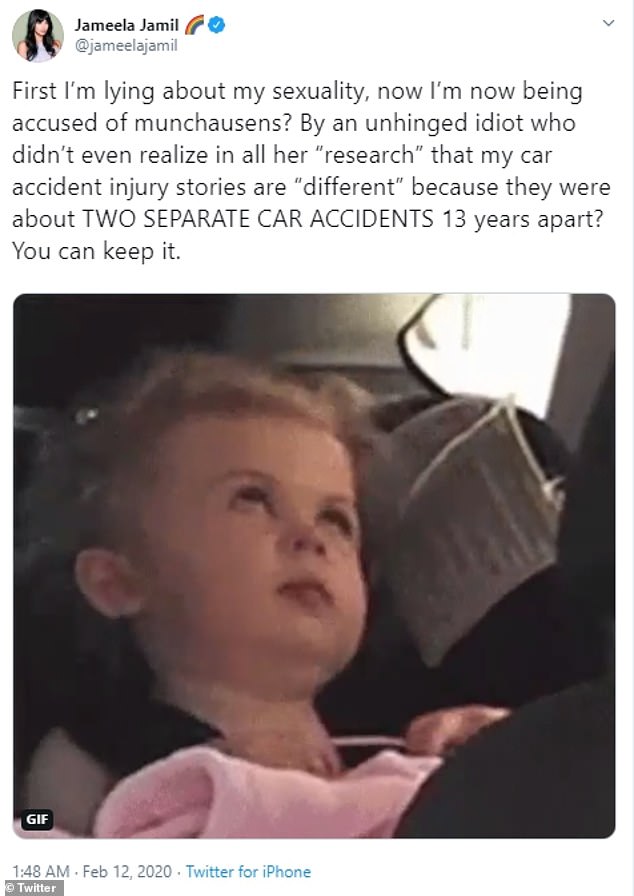 She slammed her troll as ‘unhinged’ saying: ‘First I’m lying about my sexuality, now I’m being accused of Munchhausen’s?’

Jamil then said on Twitter that she has Ehlers Danlos Syndrome which is a group of disorders that affect connective tissues supporting the skin, bones and blood vessels among others.

She followed up her shut down tweet with another, which read: ‘Ehlers Danlos Syndrome means always having people doubt your illness because you look okay. #edsawareness #itisntinyourhead #imsorrypeopleared**ks.’

The defiant star went on to call the critics wild claims a ‘dumb internet conspiracy theory’, before encouraging them to ‘keep coming’.

She said: ‘You just add to my relevance. I’m gonna keep helping people with eating disorders, and changing laws and global policies to protect kids and their mental health and there’s NOTHING you can do about it.’

Just last week Jamil came under fire when she came out as queer only after she received backlash after it was announced she’d serve as a MC and judge on HBO Max’s new voguing competition series Legendary.

Some fans argued Jamil should not host the series which focuses on ballroom culture, which was created by primarily black and Latin LGBTQ people.