PICTURE EXCLUSIVE: James Argent is put through his paces on a gruelling assault course as 26 stone TOWIE star gets to work on his fitness after revealing he’s having life-saving gastric surgery

The hard work began on Wednesday as James Argent embarked on a brand new fitness regime in a desperate bid to lose weight.

Doctors have warned the affable TV personality that he could die if he doesn’t take immediate action after his fluctuating weight ballooned to 26 stone during lockdown – leaving him unable to tie his own shoelaces.

Arriving at Essex based VIP HQ, James, 33,  was joined by a personal trainer as he worked his way across an outdoor assault course. 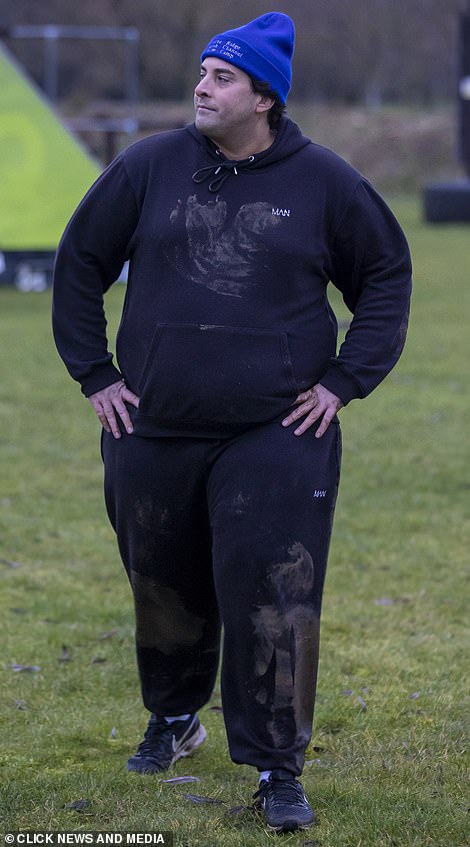 No pain no gain: The hard work began on Wednesday as James Argent embarked on a brand new fitness regime in a desperate bid to lose weight

James recently confessed that while he’s now marking a year of sobriety after overcoming his drug addiction, his weight has left him too embarrassed to leave the house and he spends hours alone comfort eating.

He told The Sun: ‘I don’t want to die. An op is the only way I can lose weight. I see pictures of myself and it’s too upsetting. The other day I had to ask my manager to put my shoes on for me because I just couldn’t do it — my belly is too big. I can’t do up my own shoe laces.

‘I don’t want to die, it’s as simple as that. I’ve been told by doctors that I am morbidly obese and need to lose weight, but I have an eating disorder, so I can’t do it.’