A ‘kiss of death’ lipstick gun and a purse with a hidden camera are among the haul of James Bond-style gadgets going up for sale in a New York auction.

Most of the devices were deployed by the Soviet Union and her comrades in the Cold War against the US and look as if they came from the imagination of ‘From Russia, with Love’ author Ian Fleming.

California auction house Julien’s will sell the roughly 400 lots online and then in-person from mid-January to February 13, 2021.

Highlights include a gun designed to look like lipstick estimated at up to $1,200; a hotel-room eavesdropping bug from 1964 valued at $500 and a purse from the 1950s with a hidden Leica camera valued at $3,500.

The ‘kiss of death’ gun designed to look like a tube of lipstick is valued at $1,200 and made to fire a single shot of a 0.177 calibre bullet – most likely in the bedroom. It was issued to female agents of the KGB and this example was obtained during a random border check between East and West Germany in 1965 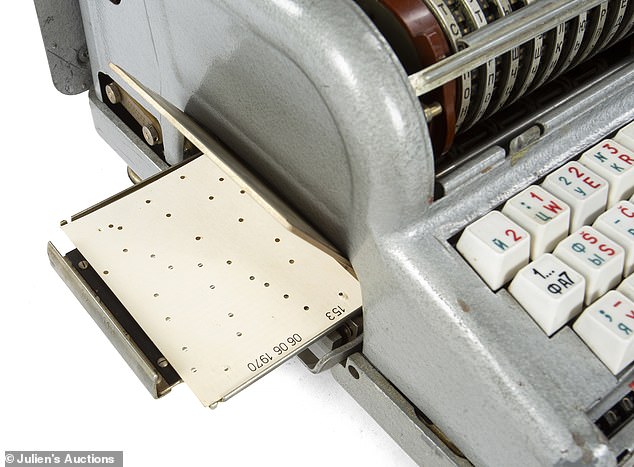 An original Soviet KGB Fialka (M-125-3M) or ‘Violet’ cipher machine used during the Cold War to code and decode secret messages, with an estimate of $8,000 to $12,000. The device uses 10 rotors, each with 30 contacts along them with mechanical pins to control the stepping. The Fialka contains a tape reader on its right side and a paper punch and printing mechanism on the left. This model, the M-125-3MN, had distinct typewheels for Latin and Cyrilic text

One of the first transistorized stationary microphone listening devices or ‘bugs’ with an adjustable frequency, circa 1964, valued at $500. The antenna is seen on the left, the microphone filter also on the left, frequency locking screws are in the center and an external power source was connected to the two pins on the right. Measuring just three inches, the circuitry is very basic with a single transistor, a coil and a couple of passive components

A replica of the type of umbrella believed to have been used to carry out the infamous assassination of Bulgarian author Georgie Markov, valued at around $3,000. The dissident writer was assassinated in September, 1978 in London, with a micro-engineered pellet containing ricin, fired into his leg from an umbrella wielded by someone associated with the Bulgarian Secret Service 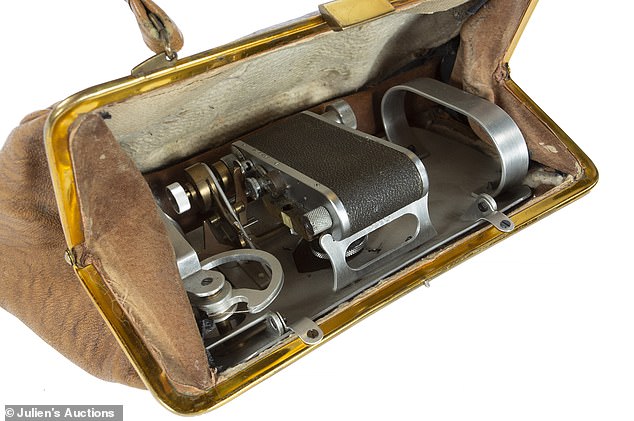 A Soviet KGB spy purse known as ‘The Fly’ used by female operatives, designed to hold a concealed FED camera – its value is estimated at $3,500. The camera – absolutely tiny for its period – was capable of capturing very high resolution images so that intelligence could be carried out and targets identified 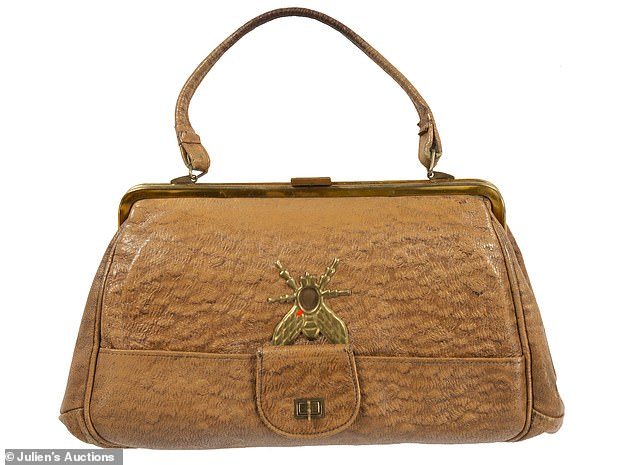 An emblem on the side of the purse, shaped like a fly, opens up to allow the camera to capture an image – hence the item’s name ‘The Fly’ 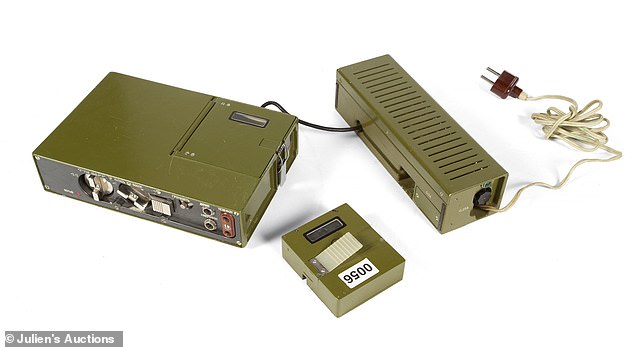 Jabbed in the leg with a an umbrella, the death of Georgie Markov

On the afternoon of September 7, 1978, Bulgarian dissident writer Georgie Markov was assassinated as he crossed the south side of Waterloo Bridge, London.

While pushing through crowds of people close to a bus stop he felt a sharp pang in his left thigh.

Turning around, he caught sight of a man reaching down for a fumbled umbrella.

‘I’m sorry,’ the man told him in a thick accent.

A moment later a taxi pulled up and he got inside and vanished.

Markov died three days later – injected with the poison ricin which was stowed in the tip of the umbrella.

At the time Markov was working for the BBC.

The prime suspect Francesco Gullino – known by his code name ‘Piccadilly’ – was questioned by British police in 1993 but later released.

A Channel Five documentary, ‘The Umbrella Assassin’ from 2006, revealed that Piccadilly was alive and well.

The items were recently on display at the KGB Espionage Museum in Manhattan, New York – a private museum opened in January 2019 by Lithuanian historian Julius Urbaitis that has closed due to the coronavirus pandemic.

The lipstick gun was designed for single shot of a 0.177 calibre bullet most likely fired in the bedroom by honey-trap agents.

Its existence was discovered during random border check between East and West Germany in 1965.

Other items are a rare Soviet version of the Enigma code cipher machine known as the Fialka (‘Violet’) with an estimate of $8,000 to $12,000.

The replica syringe umbrella believed to have been used to carry out the assassination of Bulgarian dissident writer Georgie Markov is valued at around $3,000.

He was assassinated in September, 1978, after a micro-engineered pellet containing ricin, was fired into his leg from an umbrella wielded by someone associated with the Bulgarian Secret Service on London’s Waterloo Bridge.

It has been speculated the KGB gave assistance.

A vintage 1,000-pound carved stone sculpture of Soviet leader Vladimir Lenin that stood in the headquarters of the KGB in Kaliningrad is valued at $7,000.

A machine used by border guards to detect people hiding in vehicles could fetch $1,200.

A Nazi WWII phone tap device is estimated at $2,500, while an original steel door from a former KGB prison hospital could go for $700.

And a vintage railroad ‘Infected Area’ warning sign is valued at $150.

The Cuban Missile Crisis in October 1962 was a seismic moment in Cold War history as the threat of war loomed during the tense 13-day confrontation between the United States and the Soviet Union over the installation of nuclear armed Soviet missiles on Cuba.

Hundreds of the pieces, some never before seen at auction, tell the history of the island nation located 90 miles from the U.S. and its Marxist uprising in 1959, led by the revolutionaries Fidel Castro and Ernesto ‘Che’ Guevara. 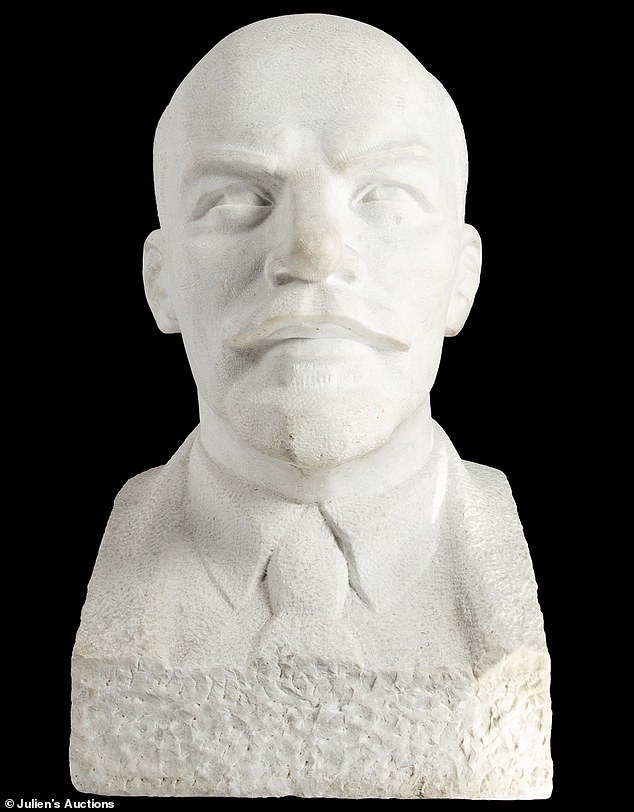 A 1,000 pound bust of Vladimir Lenin hand-carved out of white stone. The bust stood on the premises of the KGB headquarters in Kaliningrad but was eventually secreted across the border into Latvia. It is valued at $7,000 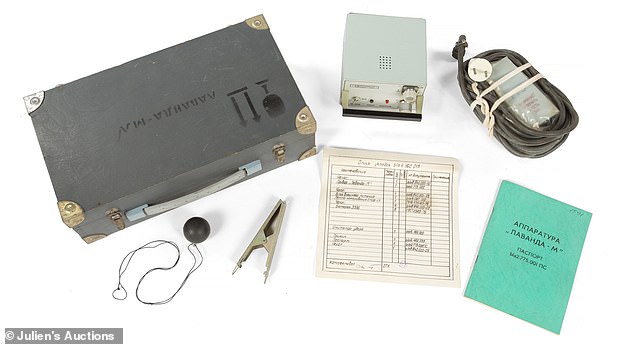 A device called ‘Lavanda-M’, built in 1986, it was designed to identify if people were hiding in vehicles. Used by the KGB at checkpoints and border crossings, the machine could detect the types of vibrations and micro movements produced by heartbeat, breathing and muscle contractions. All of these signals move through the air at less than 20Hz and are not picked up by the human ear. The apparatus is accompanied by the original logbook documenting when it was used 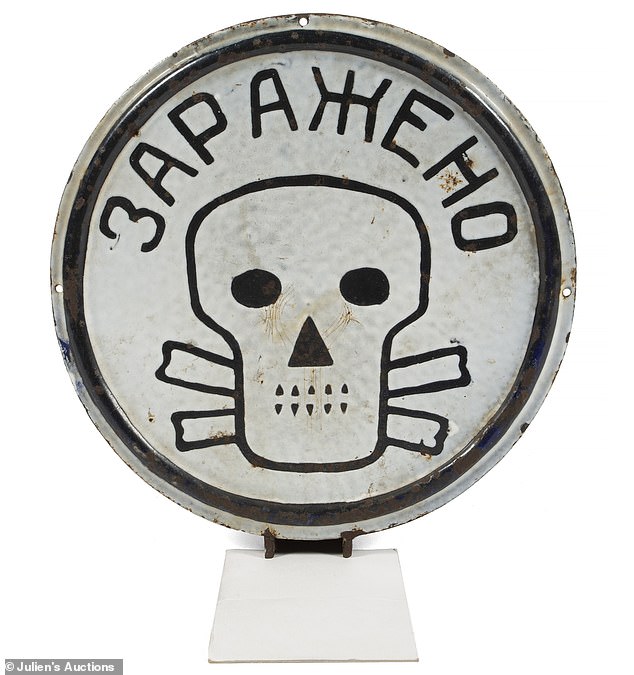 A Soviet ‘infected’ enameled skull and crossbones sign from the 1950s or 60s. These signs were used along railway lines to indicate to crew and passengers that they were passing through a radioactive sector, chemical attack zone, or diseased area

A replica of the type of umbrella believed to have been used to carry out the infamous assassination of Bulgarian author Georgie Markov (left) and an original steel door for room number 13 from a former KGB prison hospital. While under detention prisoners were known to purposely inflict injury on themselves so that they would be sent to the infirmary where they assumed the food would be better and the opportunity to communicate with the outside world would be easier, though this was not the case. The door contains an upper viewing window with bars and a lower opening for removing the prisoner’s handcuffs 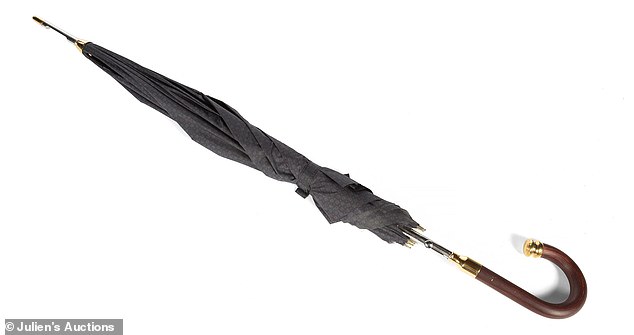 Auctioneer Darren Julien said: ‘These extraordinary items taken out of the secret archives and vaults from the U.S., Russia and Cuba will add tremendous value to any collection from world class museums to any history buff’s private trove.

‘These stunning objects offer a fascinating look at the geopolitical, economic and cultural upheaval of that time, whose impact resonates more than ever in this election year.’ 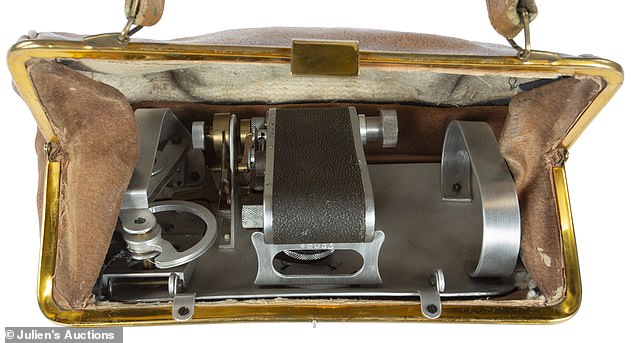 The interior of the camera-purse known as ‘The Fly’ 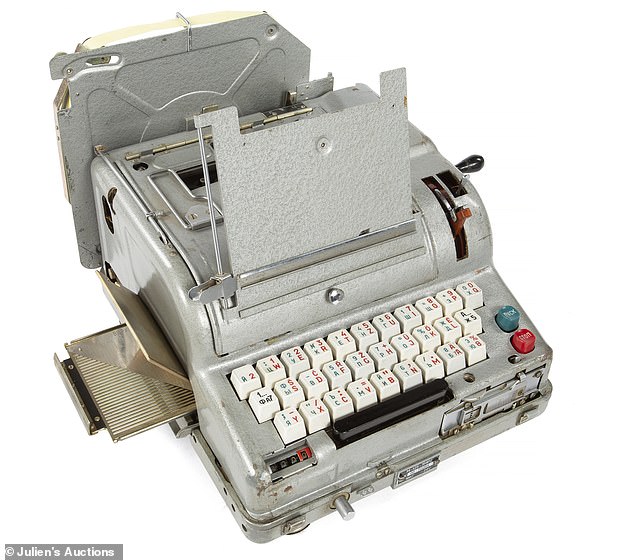 One of the first transistorized stationary microphone listening devices or ‘bugs’ with an adjustable frequency, circa 1964