James Corden opened up about his exit from The Late Late Show while joining his close friend Jimmy Fallon on The Tonight Show on Friday.

The 44-year-old actor stepped down from his hosting duties for the night to stop by the popular NBC talk show as a special guest.

Corden, who recently admitted that it was ‘terrifying’ to leave his show, additionally informed Jimmy that he had been a big inspiration to make the initial career step.

Special guest: James Corden, 44, appeared on The Tonight Show With Jimmy Fallon as a guest on Friday

Shortly after the two talk show hosts pulled off a musical number where they performed a mashup of popular Christmas tunes, such as Last Christmas by Wham, James was welcomed to the stage by a cheering crowd.

He donned a classic, black velvet suit along with a brown sweater underneath for a relaxed feel. ‘I’m so happy to be here. I really am,’ the British-born star gushed to Jimmy as the applause began to quiet.

During the interview, The Tonight Show host discussed James’ departure from The Late Late Show, which will take place in Spring 2023.

The Ocean’s 8 actor admitted that filming the very last episode will be far from easy. ‘My intention, which I think I’ll fail at dramatically, is to just not be crying for the entire hour, which I think I will be.’

‘So I’m really going to try to keep it together. Our intention is to, you know, go out in the way that we came in and I will miss it hugely,’ he stated. 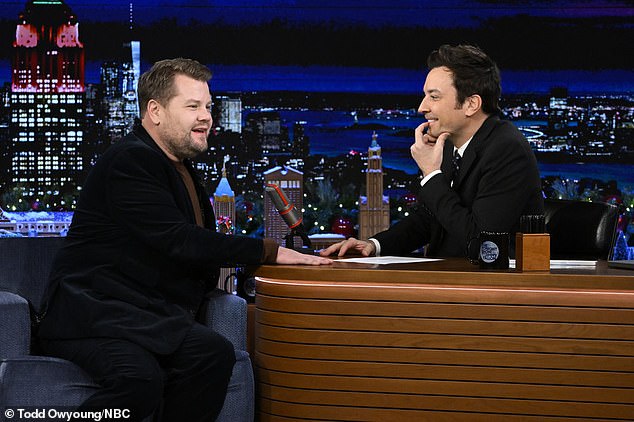 Reunited! The two talk show hosts, who are also good friends, reunited on The Tonight Show which aired on Friday

James revealed to Jimmy that the main reason for his exit was, ‘primarily because we’re a long way from home, and we really want our children to know what it’s like to grow up in London.’

The Peter Rabbit star shares three children, Max, 11; Carey, eight; and Charlotte, five, with his wife of ten years, Julia Carey. He added that he wants his kids to have a good ‘relationship with their grandparents. And that is time that you don’t get back really.’

The actor expressed that although he was sad to depart the late night talk show, he felt ‘certain it’s the right thing to do,’ adding, ‘I’ve loved every second of doing it.’

James’ appearance as a guest on The Tonight Show was a first for the actor, but the former Saturday Night Live comedian expressed that the two have ‘hung out many times.’

The stars then revealed a ‘running joke’ they have, with James explaining that it had started when he had walked up to Jimmy at a party as the comedian reached to take a sip of his drink. 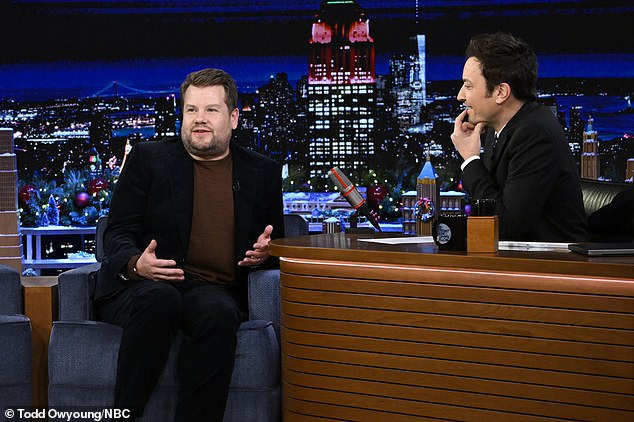 Saying goodbye: The actor revealed that he was leaving The Late Late Show, ‘primarily because we’re a long way from home, and we really want our children to know what it’s like to grow up in London’ 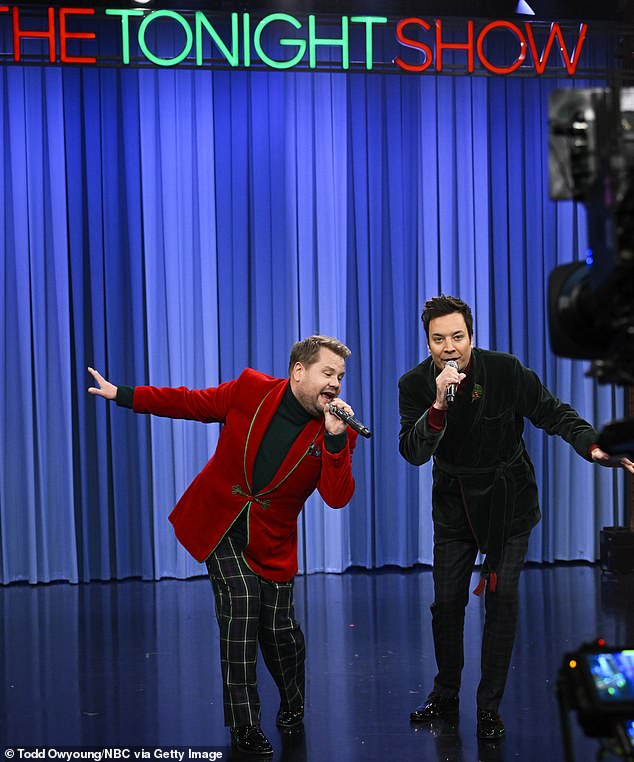 Festive: James and Jimmy opened the show by singing a mashup of popular Christmas songs to get into the holiday spirit 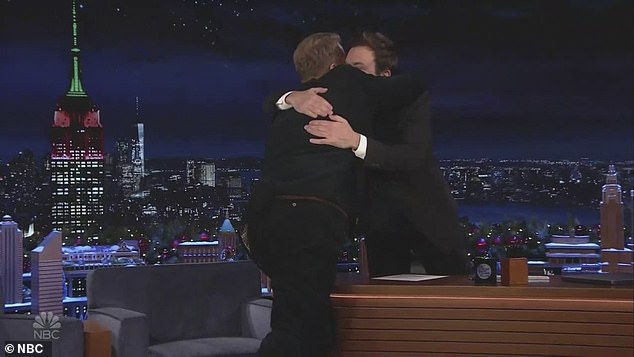 Heartfelt moment: ‘I don’t know if I would have ever hosted my show if it wasn’t for watching you do this show and all the people you have here,’ James had told Jimmy on the show

‘And I swooped in, picked it up, looked you dead in the eye and drunk the whole thing and put it back,’ James humorously recalled. Since then, the two will often do the bit if they are at an event together.

The friends also had a special heartfelt moment on the show, with James telling Jimmy, ‘I don’t know if I would have ever hosted my show if it wasn’t for watching you do this show and all the people you have here.’

As the interview came to a close, the SNL alumnus emotionally expressed to James that he will ‘miss’ watching his show, ‘and you would do things that would make me want to be better at my job. So, I want to thank you for everything you do.’

The hosts then shared a quick embrace, before Jenna Ortega was welcomed to the stage. She turned heads wearing a sheer black dress with a white pointed collar and matching cuffs. A black tie was added along with a silver, chrome corset to accentuate her slim waist.

The actress has leapt into the spotlight with her lead role in the hit Netflix show, Wednesday. 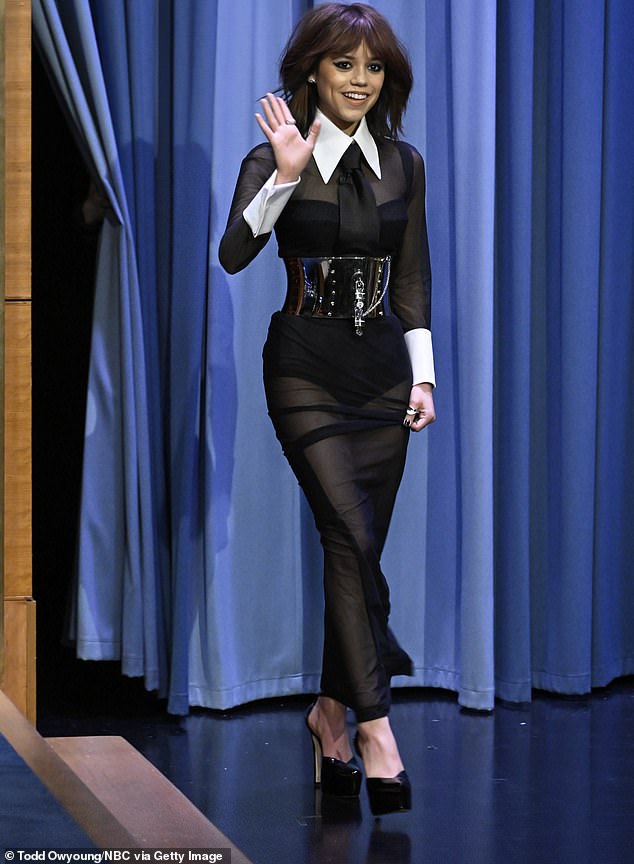 Stunning! Jenna Ortega was another guest on Friday’s show, and she stepped out wearing a sheer, black dress with a pointed collar and tie 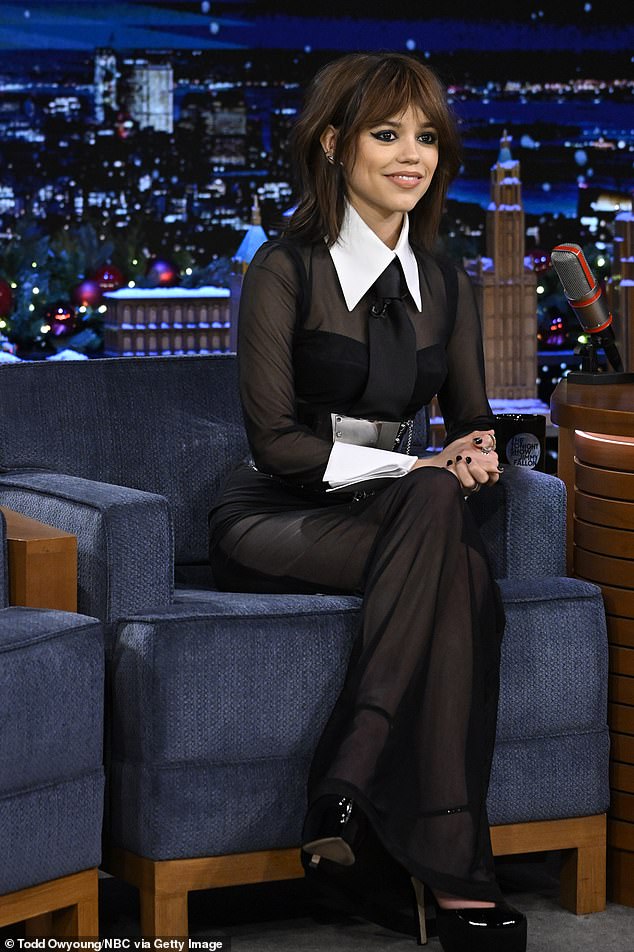 The Wednesday dance: The actress opened up about her iconic dance from the fourth episode playing Wednesday Addams in the hit Netflix series, Wednesday

Jenna and Jimmy talked about her famous dance scene from the fourth episode, and she revealed that two days before the scene was shot, the director, Tim Burton, had asked her to choreograph her own dance.

The talented beauty admitted that while Tim had thought she had been working on something for a while, the star actually ‘had no plan.’

Jenna informed Jimmy that she, ‘didn’t sleep for two days’ and watched numerous videos to gather ideas, such as watching, ‘archival footage of Goth kids dancing in clubs in the ’80s.’

The Scream actress stated that Netflix had told her that the dance would go viral on TikTok but that she didn’t believe it. ‘And then they were right,’ she humorously added. 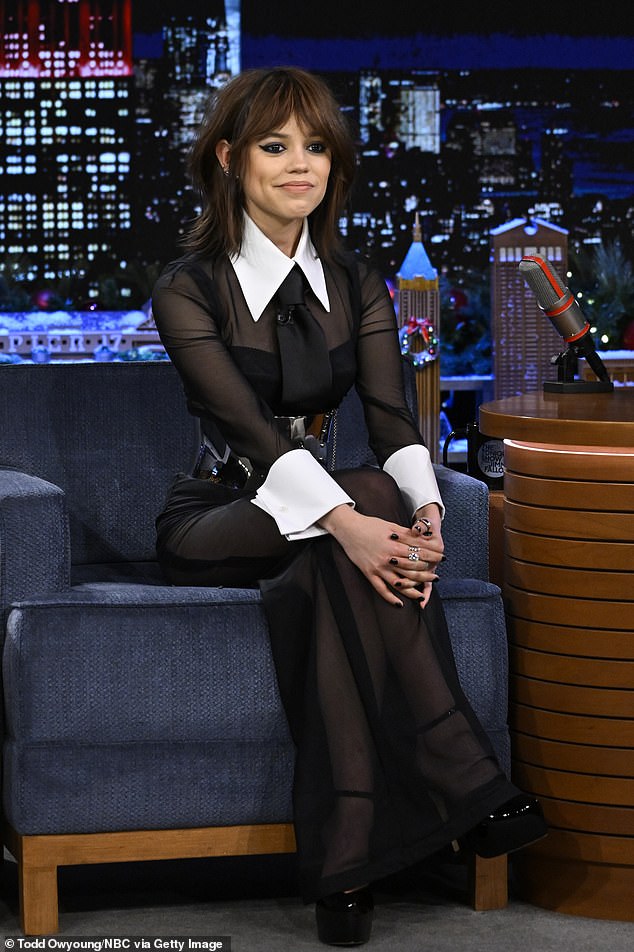 Dance inspirations: The Scream actress revealed she ‘didn’t sleep for two days’ and watched numerous videos to gather ideas, such as watching, ‘archival footage of Goth kids dancing in clubs in the ’80s’ 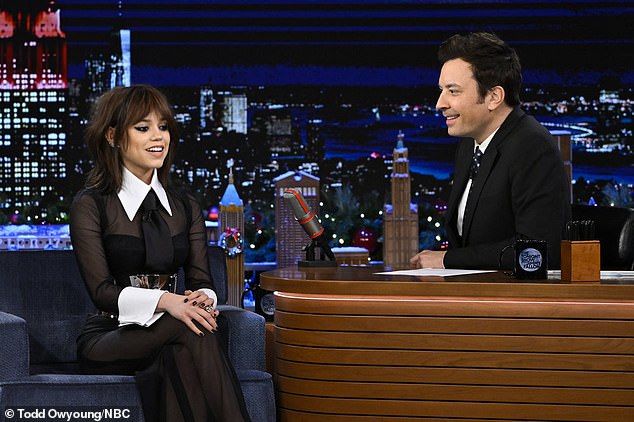 ‘No plan’: Jenna told Jimmy that two days before the dance scene was shot, the director, Tim Burton, had asked her to choreograph a dance, but she revealed that she ‘had no plan’ for a dance 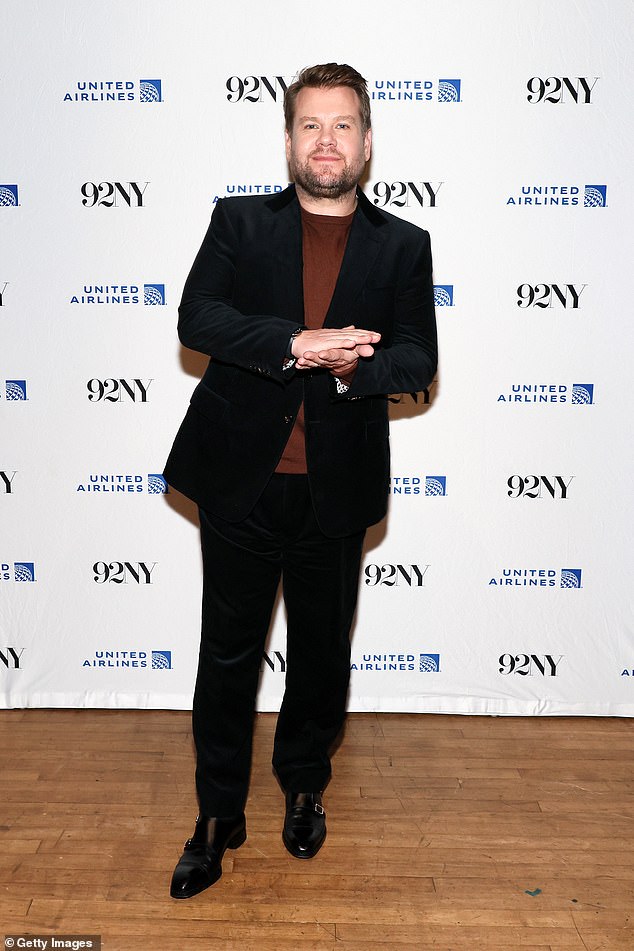 Busy: Also on Friday, James was spotted attending the James Corden In Conversation With MTV’s Josh Horowitz panel in NYC

Also on Friday, James was seen stopping by the James Corden In Conversation With MTV’s Josh Horowitz panel and screening in New York City.

He could be seen wearing the same outfit he had worn when he joined Jimmy Fallon on The Tonight Show.

During the panel, the actor opened up about his latest dark comedy called, Mammals, which premiered on Amazon Prime Video last month in November.

Accoridng to an IMDB synopsis, the series follows, ‘a Michelin-starred chef whose world implodes when he discovers shocking secrets about his pregnant wife.’ Other talented actors in the show include Sally Hawkins, singer Tom Jones, and Melia Kreiling.

At the event, James crossed paths with actor Sam Rockwell, who has appeared in films such as Jojo Rabbit, The Green Mile, and See How They Run. The two stars stopped to take a quick, memorable photo together. 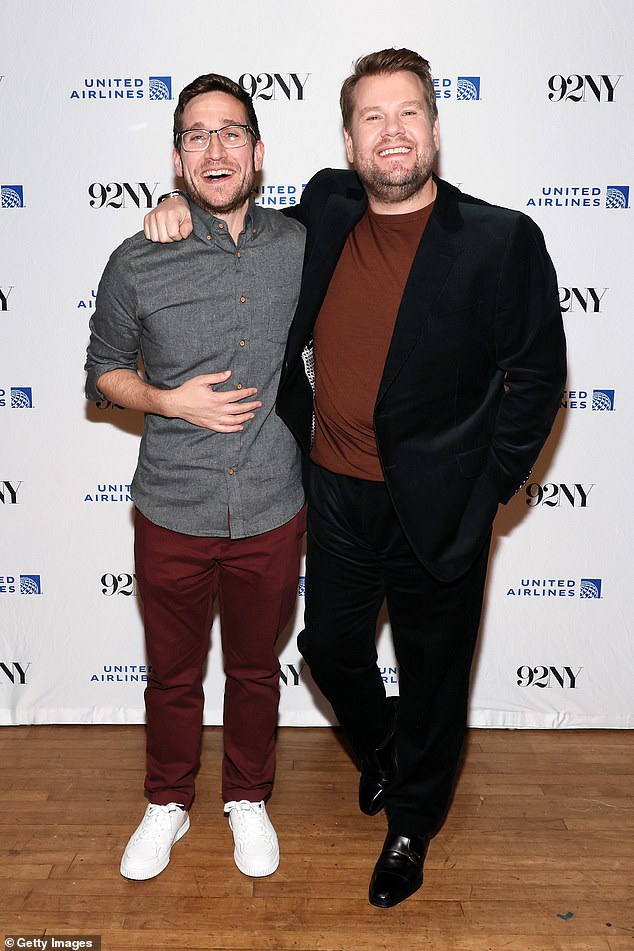 Having fun: The talk show host posed next to Josh Horowitz at the special event during a quick photo session 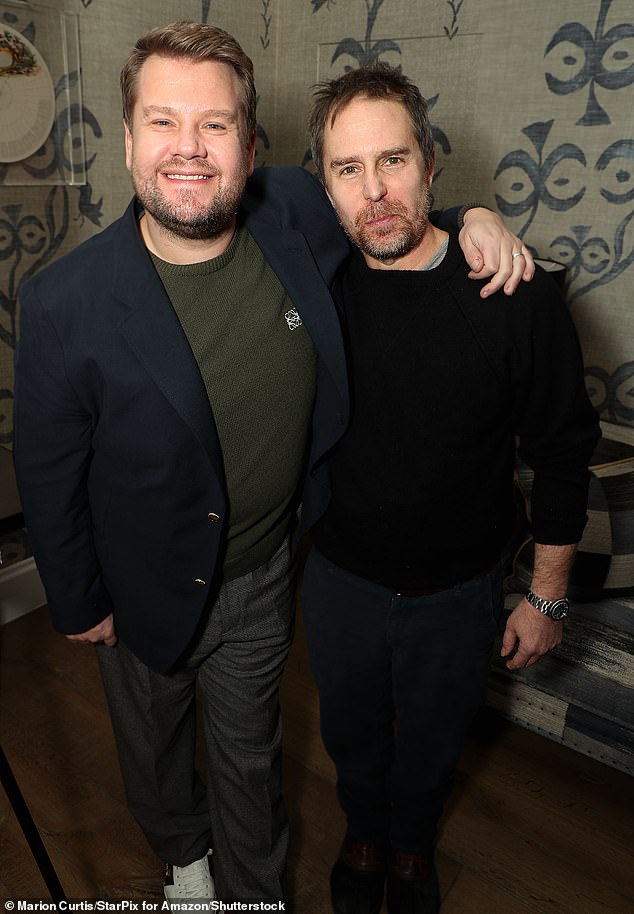 Crossing paths: James was spotted crossing paths with fellow actor, Sam Rockwell, and the two stars paused for a memorable snap together 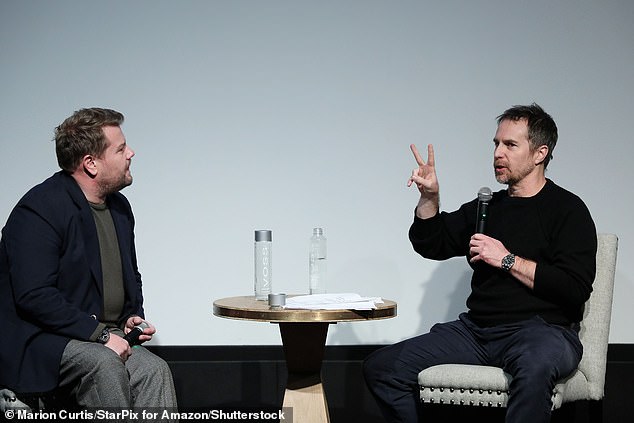 Conversation: James and Sam were pictured talking on stage during a panel discussion and screening of Mammals