James Gunn: All the celebrities standing by the Guardians of the Galaxy director

James Gunn, the Guardians of the Galaxy director who was fired for historic tweets in which he had joked about sensitive subjects such as rape and pedophilia, could be reinstated after more than 300,000 people signed a Change.org petition.

All nine of the Guardians of the Galaxy franchise’s stars also signed the open letter 10 days after his firing, calling for the two-time director to return for the series’ third film, which is slated for release in 2020.

However, rumours have emerged that there is a ‘growing feeling’ that Disney may cave in to pressure because there has not been a rush to replace him amid deadlines and production scheduled to start early next year. But who is supporting James Gunn?

James Gunn, the Guardians of the Galaxy director who was fired for historic tweets in which he had joked about sensitive subjects such as rape and pedophilia, could be reinstated

Born in St. Louis, Missouri, James Gunn is from a large family of lawyers, but started writing and performing from a young age and dropped out of college to pursue a career in rock and roll, according to his biography on IMDb.

His band, who were called The Icons, released one album called Mom, We Like It Here on Earth and after struggling to make money, worked as an orderly in Tuscon, Arizona, where his experiences inspired him to write his first novel, The Toy Collector.

After returning to school and earning a BA at Saint Louis University, James went on to study for an MFA in creative writing in New York from Columbia and has been noted to say that it was a ‘wonderfully expensive waste of time’.

Gunn started working for the leading B-Movie production company, Troma Studios and produced Tromeo and Juliet before working with Lloyd Kaufman on All I Need to Know about Filmmaking I Learned from the Toxic Avenger.

He then quit Troma and moved to Los Angeles where his career was more fruitful: James wrote and acted in The Specials, wrote Spy vs Spy, Scooby-Doo and Scooby-Doo 2: Monsters Unleashed before making his directorial debut with Slither in 2006.

After Super in 2010, Gunn turned his attention to the Guardians of the Galaxy series with the first film being released in 2014 and Vol. 2 in 2017. He married The Office star Jenna Fischer in 2000 but divorced eight years later; James in now with Jennifer Holland. 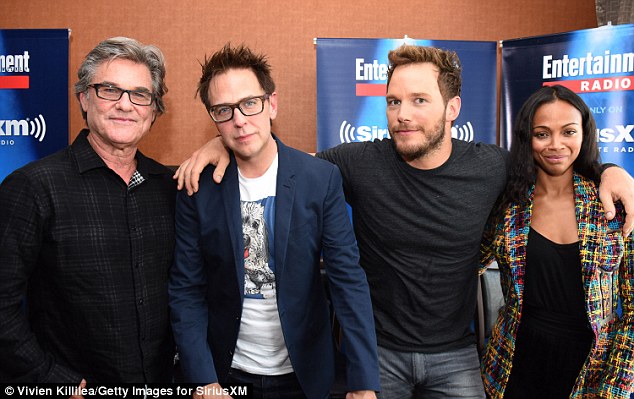 After a number of historic tweets, James Gunn may not be able to write the script for or direct the third Guardians of the Galaxy film after it emerged that he made light of subjects like pedophilia and rape. One tweet read: ‘I like when little boys touch me in my silly place.’

Another read: ‘The best thing about being raped is when you’re done being raped and it’s like, “whew this feels great, not being raped!”’ After these tweets were found and reposted by alt-right social media personality and conspiracy theorist Mike Cernovich, the Walt Disney chairman released a statement.

It read: ‘The offensive attitudes and statements discovered on James’s Twitter feed are indefensible and inconsistent with our studio’s values and we have severed our business relationship with him.’ Gunn also issued a statement after responding directly on Twitter.

The tweets read: ‘Many people who have followed my career know, when I started, I viewed myself as a provocateur, making movies and telling jokes that were outrageous and taboo. As I have discussed publicly many times, as I’ve developed as a person, so has my work and my humor.’

He added: ‘It’s not to say I’m better, but I am very, very different than I was a few years ago; today I try to root my work in love and connection and less in anger. My days saying something just because it’s shocking and trying to get a reaction are over.’

1. Many people who have followed my career know when I started, I viewed myself as a provocateur, making movies and telling jokes that were outrageous and taboo. As I have discussed publicly many times, as I’ve developed as a person, so has my work and my humor.

According to Hollywood Reporter, after the conservative website The Daily Caller found the posts from 2008 and 2009, personalities began tweeting followers to confront Gunn at Comic-Con where he had been expected to appear on a panel.

James released an official statement, which said that he ‘regretted’ the tweets and stressed that ‘they don’t reflect the person I am today. My words of nearly a decade ago were, at the time, totally failed and unfortunate efforts to be provocative.

‘I have regretted them for many years since — not just because they were stupid, not at all funny, wildly insensitive, and certainly not provocative like I had hoped, but also because they don’t reflect the person I am today or have been for some time.

He continued: ‘Regardless of how much time has passed, I understand and accept the business decisions taken today. Even these many years later, I take full responsibility for the way I conducted myself then.

‘All I can do now, beyond offering my sincere and heartfelt regret, is to be the best human being I can be: accepting, understanding, committed to equality, and far more thoughtful about my public statements and my obligations to our public discourse. To everyone inside my industry and beyond, I again offer my deepest apologies. Love to all.’ 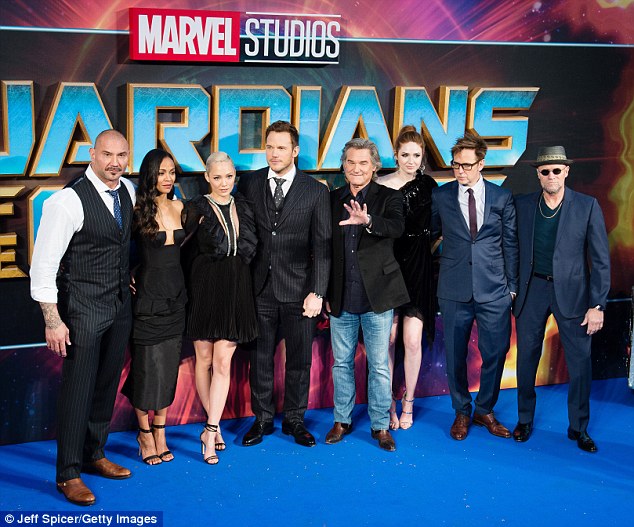 Who is supporting James Gunn?

After James Gunn was fired, the entire Guardians of the Galaxy cast signed an open letter which called for the director to return and be reinstated in his former role. At the same time, 340,000 people signed a petition on Change.org demanding for Gunn to be brought back.

‘We were all shocked by his abrupt firing last week and have intentionally waited these ten days to respond in order to think, pray, listen and discuss.

‘In that time, we’ve been encouraged by the outpouring of support from fans and members of the media who wish to see James reinstated as director of Volume 3 as well as discouraged by those so easily duped into believing the many outlandish conspiracy theories surrounding them.’

Chris Pratt shared the open letter on his Instagram account along with the caption: ‘Although I don’t support James Gunn’s inappropriate jokes from years ago, he is a good man. I’d personally love to see him reinstated as director of Volume 3. If you please, read the following statement- signed by our entire cast.’

Zoe Saldana shared it on Twitter and said: ‘If you please, read the statement written and signed by The Guardians of the Galaxy cast in support of James Gunn’s reinstatement as director of GOTG Volume 3.’ Other cast members did the same and shared the letter with their followers.

1. I hope it goes without saying that I love and support my brother James. And I’m quite proud of how kind, generous, and compassionate he is with the people in his life, whether they are friends, family, colleagues, fans, or strangers.

As reported on Fox News, actress Selma Blair has also deleted her Twitter account in solidarity with James Gunn and revealed to Deadline that fans can ‘find me on Instagram’.

‘@JamesGunn I thank you for your talent, your decency and your evolution as a man. You propped me up when I was in a scary place, and guided me towards the decent and right thing to do. You have shown strength of character more than most anyone I know.

‘Because if people are punished despite changing, then what does that teach people about owning mistakes and evolving? This man is one of the good ones,’ she continued and went on to urge her followers to sign the petition.

However, fans have also taken to Twitter to express how they feel about the cast supporting James Gunn. One user said: ‘To all the people asking “Would you trust him with YOUR CHILDREN?!?!” 1. Don’t have any. 2. In what universe is that possible? 3. I would trust him before I trusted any of you idiots, because: A. He’s not a pedophile B. You’d probably make my kid stupid.’

Another said: ‘Disney will never “re-hire.” He lost his job for a reason and he deserved. Disney won’t work with a potential pedophile. It’s Disney, for god’s sake. Let it go!’

Here’s a selection of tweets that present the divided opinion on James Gunn.

Disney is being extremely hypocritical with their desicion to fire James Gunn. If this is the world we live in where this blatant hypocrisy is displayed with nothing more than a bat of the eye, we are all royally screwed.

So who else thinks that @JamesGunn will be the one that breaks it all apart for hollywood? Hes the one who got taken down for “jokes”. Everyone is now defending him. When they find out hes actually a pedo, will that be enough to break it all open? #qanon #WhereAreTheChildren

I know @Disney wants to appeal to everyone, but if anybody honestly believes that:

Do they REALLY deserve to have an opinion here? #RehireJamesGunn

Huge fan of the GOTG cast defending James Gunn. Poor taste in humour a decade ago should not cost a man his job. Glad the actors have put aside public approval in favour of doing what they feel is right.

For weeks the MSM & Hollyweird mockingbirds were SCREAMING about illegal immigrant children being separated & in danger.
This week, the same people are screaming their defense & praise for pedolove jokester James Gunn.

False idols-do you care about defenseless children or not?