‘When you see your mates are out, but no-one gave you a call’: James Milner jokes after he is left out of modelling duties for Liverpool’s new home kit

James Milner joked on Twitter about his lack of involvement in the launch of Liverpool’s new kit.

The Reds had revealed their strip for next season with a promotional photo shoot involving his team-mates.

Alisson, Sadio Mane, Mo Salah, Roberto Firmino, Jordan Henderson and Trent Alexander-Arnold were all chosen to sample the kit for the 2019-20 campaign.

But Milner didn’t get the invite and quipped: ‘When you see your mates are out, but no-one gave you a call.’

The 33-year-old has been a stalwart at the club since joining as a free agent back in 2015.

But his contract is due to expire at the end of the season, perhaps explaining why he was not involved in any promotional activity. 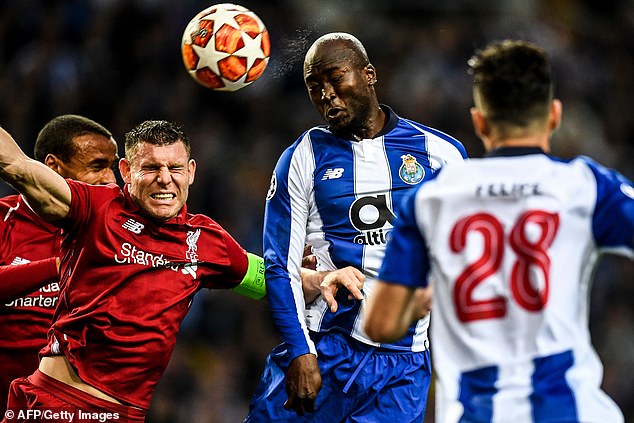 Milner has been a crucial member of Jurgen Klopp’s side again this term, making 39 appearances in all competitions.

He’s also chipped in with six goals and six assists to help Liverpool to the top of the Premier League and played the full 90 minutes in the 4-1 win over Porto on Wednesday night.

The Reds marched on to the semi-finals with a 6-1 aggregate victory and will face Barcelona for a place in the final against either Tottenham or Ajax.