There were more than a few eyebrows raised when James Rodriguez joined Bayern Munich from Real Madrid on a two-year loan deal in July, less than three months after the rival teams faced off in the 2017 Champions League quarter-finals.

The Colombian was the poster boy of the 2014 World Cup and scorer of the goal of the tournament against Uruguay. A £63million move from Monaco to Real Madrid followed that summer leaving Madrid fans salivating over their latest Galactico.

But just as Kaka had five years before him, Rodriguez struggled to shine as brightly amid a team of superstars and was soon reduced to a fringe role under Zinedine Zidane. The Bayern loan was as much about reviving his career as anything else.

Yet at the Allianz Arena in Wednesday’s Champions League semi-final first leg, Rodriguez reminded his parent club what he’s capable of when handed the keys to a midfield.

He started the game in the central attacking midfield position alongside Thomas Muller and behind lone striker Robert Lewandowski. But after Arjen Robben was forced off through injury to be replaced by Thiago Alcantara, Rodriguez’s role became less defined.

Rodriguez initially positioned himself on the left flank to fill in for Robben but as the half wore on he came further and further infield, dropping deep alongside defensive midfielder Javi Martinez to gain possession.

It was from deep that he teed up Joshua Kimmich for Bayern’s opener. Way inside his own half, Kimmich passed to Muller before continuing his run forward. 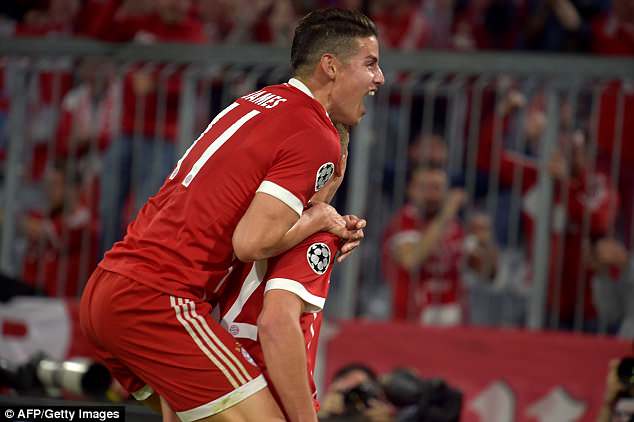 Rodriguez collected from Muller, took a touch and delivered a concise through-ball to release Kimmich into the acres of space in behind Madrid’s defence before the German finished with aplomb.

The 26-year-old’s assist was his 12th of an impressive season and he almost had a 13th just minutes later, only for his inswinging corner to be inexplicably put wide by Muller.

His heat map indicates how hard Rodriguez worked to evade Madrid’s midfield trio Luka Modric, Toni Kroos and Casemiro – the midfield he failed to break into during his spell at the Bernabeu.

Rodriguez’s influence lessened in the second half but he remained a creative outlet, popping up in pockets of space and setting up Muller and Lewandowski for further opportunities. Bayern’s attacks came increasingly through Ribery instead. 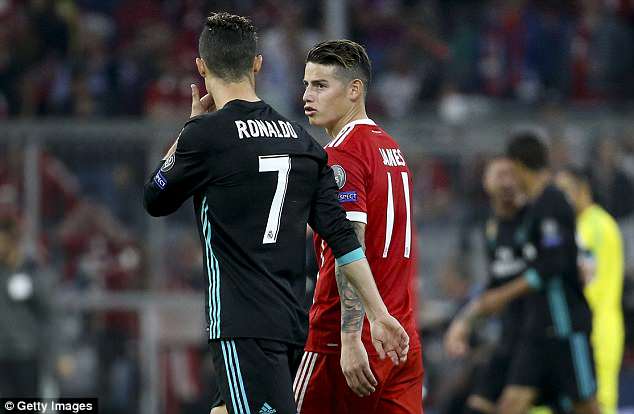 A return to Madrid looks unlikely, Bayern are set to trigger a clause in his loan deal this summer which allows them to make the move permanent for £36m, an additional fee to the £11m they paid in July. As early as last December, Rodriguez said he could imagine staying at Bayern ‘for many years to come’.

In fairness he might be better advised to remain in Germany. Madrid’s squad depth is such that Gareth Bale was an unused substitute while Marco Asensio, Karim Benzema and Mateo Kovacic were introduced from the bench.

And should Bale leave this summer then Chelsea’s Eden Hazard could be the next big name signing set to move to the Spanish capital. It’s always been a case of next Galactico up for the world’s most glamorous football club.

But while Rodriguez found himself the odd superstar out in Madrid, Bayern have given him the chance to rebuild his reputation at another European giant. 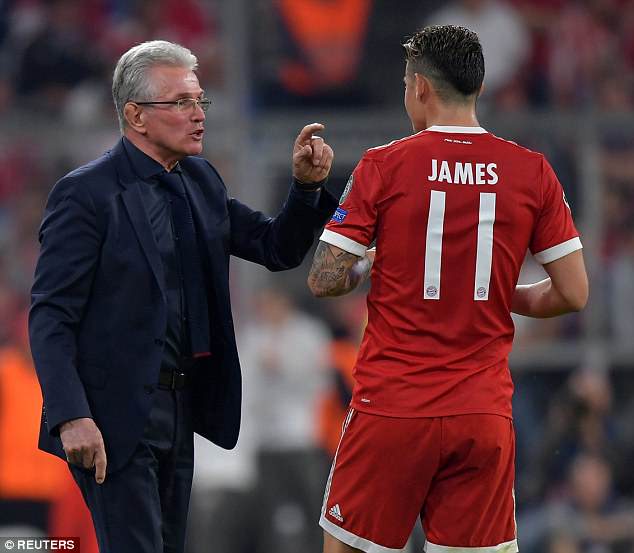 His manager Jupp Heynckes, who took over from Carlo Ancelotti in October, had admitted that Rodriguez was low on confidence following his failed spell at Madrid.

‘He was a little depressed,’ Heynckes recalled of Rodriguez ahead of Wednesday’s first leg. ‘I took care of him, I had lots of talks with him, and step by step he found confidence. He is more relaxed within the team.

‘Our fans here, when they see him play football, they enjoy it. Above all he is a player who has fantasy, has an overview. He is more open-minded and gives the impression he feels well and has settled in Munich. I think this is most fundamental.’

Since Heynckes took over, Rodriguez has been a revelation for the Bundesliga champions. The midfielder has provided six league goals and is back playing the best football of his career since his Porto and Monaco days, which first earned him that big-money move to Madrid.

His team may have lost on Wednesday but Rodriguez proved to Zidane and the travelling Spanish supporters that he’s much more than a Madrid reject.