James Tavernier has backed boss Pedro Caixinha’s claims that Rangers have a special talent on their hands with Ross McCrorie.

The 19-year-old was plunged into a baptism of fire as he made his first Light Blues start during Saturday’s Old Firm clash with Celtic.

And while there was disappointment for Gers as they slumped to a 2-0 defeat, McCrorie offered some hope for the future with an impressive derby bow.

His display was no surprise to Caixinha, who declared last week he would have no hesitation throwing the teenager in for injured Euro 2016 winner Bruno Alves.

He said following his second-half substitute run-out against Partick Thistle on Tuesday: ‘Ross McCrorie is going to be one of the best centre-halves in history, not just for this club but for this country.’

Now after watching his young colleague shackle Hoops frontman Leigh Griffiths for much of the match, Tavernier says he agrees.

‘I thought young Ross had a cracking game for his first Old Firm,’ said the Ibrox right-back. ‘He didn’t look out of place.

‘Ross works hard in training and did really well in the pre-season games and coming on against Partick.

‘Today he showed great signs of being a promising young player. As long as he keeps his head down and works hard, he’ll be a cracking centre back.’

Alves was ruled out of the opening derby clash of the campaign after suffering a calf tear during the Ibrox side’s Betfred Cup win over Thistle.

Caixinha’s men now trail Brendan Rodgers’ relentless league leaders by eight points and the Rangers boss will be desperate to have his veteran centre-back in time for Friday’s trip to Hamilton. 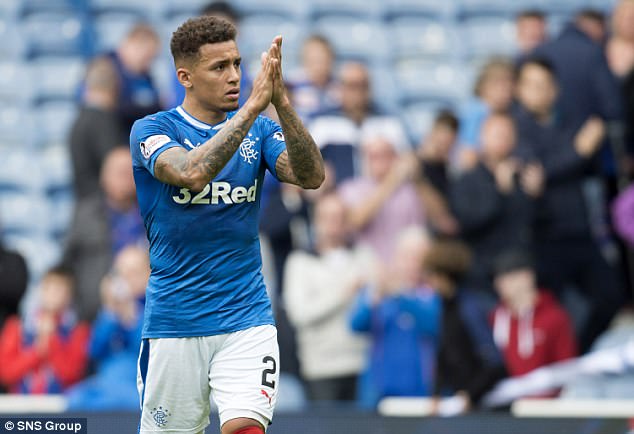 Alves has jetted out to Spain to have his injury assessed by the same medics who treat Real Madrid superstar Cristiano Ronaldo.

But if his Portugal team-mate Alves fails to recover, Caixinha insists he has a more-than-able deputy in Scotland Under-21 cap McCrorie.

He said: ‘Bruno has a Grade One on his calf so he’s doing an intensive programme with Cristiano Ronald’s physio in Madrid.

‘He started on Friday and we hope to have him back on Monday to do tests to see if he’s able to play next Friday.

‘But McCrorie is a player I don’t have doubts about. I like Ross a lot and did really well.

‘He didn’t shake and didn’t fail the test. That’s his mentality. He did his job okay on Saturday.’