Lying on a filthy mattress in a grim, windowless cell surrounded by murder suspects, Jamie Harron struggled to make sense of his cruel, Kafkaesque predicament.

Only a few hours earlier the 27-year-old electrician was sampling Dubai’s glitzy nightlife; his last burst of fun before flying, the next day, to Afghanistan to complete a lucrative contract.

Mr Harron had been to Dubai many times before. He’d always found its superficial glitter appealing, but now he was experiencing the desert city’s dark heart – facing an indeterminate prison sentence for an impossible crime. He’d brushed past a man in a crowded bar. Yet somehow this split-second encounter was threatening his very future – inexplicably, he was looking at a charge of a serious sexual assault.

Now free, Mr Harron told The Mail on Sunday in an exclusive interview: ‘The whole thing was a nightmare from start to finish’

Eventually, after an international outcry, reason prevailed and he was cleared by the ruler of the emirate, Sheikh Mohammed bin Rashid Al Maktoum.

Now free, Mr Harron told The Mail on Sunday in an exclusive interview: ‘The whole thing was a nightmare from start to finish.

And in a warning to Britain’s one million annual visitors to Dubai, he added: ‘People should be very wary. The legal system in Dubai is a shambles and if this can happen to me, it can happen to anyone.’

The case, Mr Harron acknowledges, raised some unexplained questions. Surely there was more to the story than was reported? Perhaps Mr Harron was gay and, in a country where homosexuality is common but remains illegal, had made a pass at the wrong man?

Determined to dispel such suggestions, he explains what really happened that night and reveals that the police allegation against him was even more bizarre – and ludicrous – than previously stated.

He was accused of thrusting his hand down the man’s shorts and penetratively assaulting him – an act, he emphasises, that was simply not possible. ‘Of course I never did that – and I am not homosexual,’ he says. Indeed he believes the incident may have been sparked after he got chatting to a waitress whom the other man had shown an interest in. 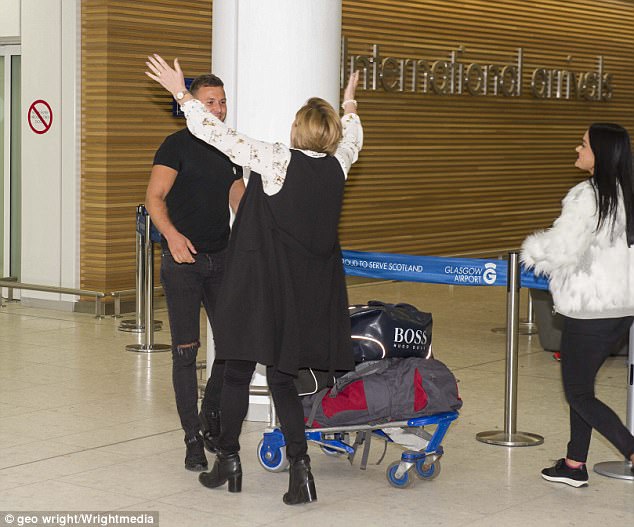 ‘This has ruined four months of my life – I lost all my savings, £60,000, and my job, and my reputation has been damaged.’ He is pictured arriving home and being greeted by his mother

‘He was in there before us, and I think he was maybe trying to talk to her before, and then us two young guys come and start chatting to her and having a laugh, and he had a problem with it.’

The whole drama unfolded in July after Mr Harron, from a suburb of Stirling, decided to stop off in Dubai after a stint working in Afghanistan, earning £7,000 a month as a contractor for an American construction firm at the Bagram military airbase. He had booked a two-day stopover en route home and was looking forward to catching up with a friend.

The young Scot – now single after a number of long-term relationships – had been to the emirate nine times and was well aware of the strict Islamic laws which criminalise being drunk in public.

After a meal at his friend’s villa on July 15, they headed out at around 10pm to the Rock Bottom, a busy American-themed bar with a live rock band.

It was there that he chatted to the attractive waitress and became aware that a middle-aged man – Mr Tabaza, the boss of an engineering firm – was repeatedly glancing over at them. He was with two others and all three were dressed in shorts.

Then, as Mr Harron and his friend moved through the busy bar toward a free table, they had to pass Mr Tabaza and his friends. Moving past him, he extended the open palm of his right hand to avoid bumping into Mr Tabaza, but brushed against his hip. Immediately, the man took objection and started speaking quickly in Arabic. ‘As I passed this guy, with a drink in my hand, I put my hand out like you would in a pub when you’re passing somebody, it’s just natural. 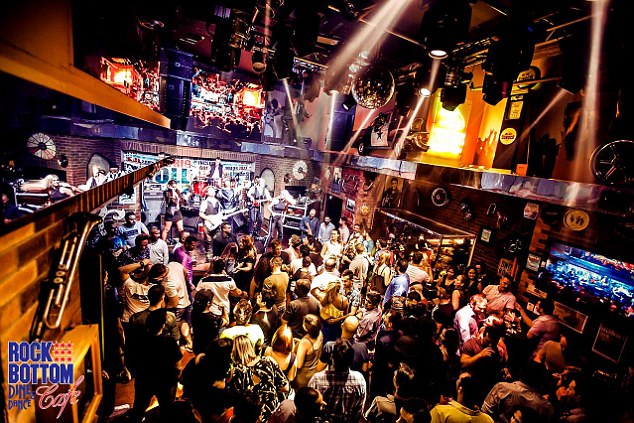 As Mr Harron and his friend moved through the busy bar toward a free table, they had to pass Mr Tabaza, the boss of an engineering firm, and his friends. Moving past him, he extended the open palm of his right hand to avoid bumping into Mr Tabaza, but brushed against his hip

‘And I said “sorry mate” as I did it. It was a tight gap with the table and I guided my way past him – I just scuffed him, like put my hand on him to move past and not spill my drink or lose balance. He then started saying something, but he was talking a foreign language. I apologised for pushing past him again.’ When Mr Harron and his friend sat down at a table further down the bar, they heard the man still shouting, and saw him gesticulating wildly towards them.

‘It just escalated from there. I said to my friend, “Is he shouting and pointing at me?” Next thing I knew he was on his phone. I heard him say, in English, “Do you know who I am? I will make sure you are deported.” At first I thought he was just having a laugh. I sat down with my mate and we started talking about work.’

Then around 25 minutes later Mr Harron saw police arrive outside and Mr Tabaza speaking to them. Mr Harron joined them all outside to find out what was going on.

Mr Harron adds: ‘He was saying to the police, “He’s been drinking… Do you know who I am?” Then they all started speaking Arabic, I didn’t know what was going on.’

When officers asked Mr Harron to go to the police station, he was happy to oblige.

Acutely aware his flight was leaving the next morning, he just wanted to defuse the situation but the next thing he knew, he found himself handcuffed and thrown into a holding cell at the Al Barsha jail. ‘I was then taken to get breathalysed. I thought I was getting out after that. But then I was taken downstairs and flung in with everybody in the big jail cell.’ 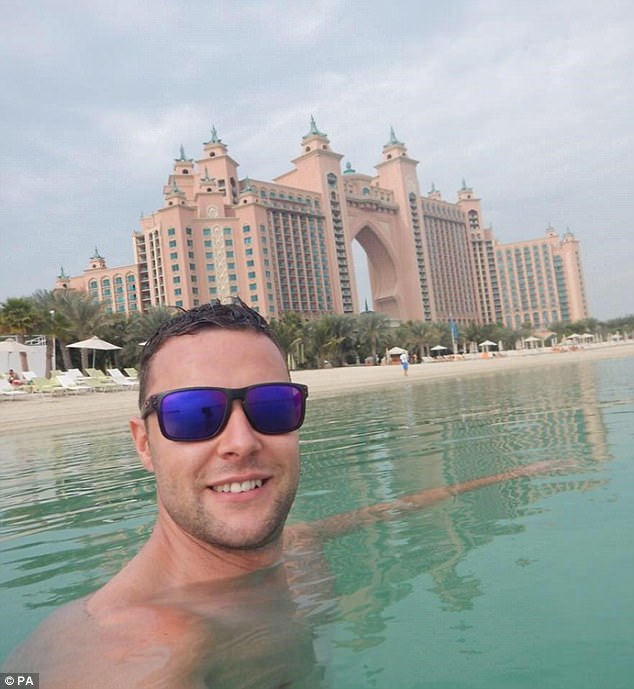 Then around 25 minutes later Mr Harron saw police arrive outside and Mr Tabaza speaking to them. When officers asked Mr Harron to go to the police station, he was happy to oblige, but was soon thrown in jail

He said: ‘I felt depressed and really hopeless, and I just felt like I was alone, on my own out there.’

Sleeping on a threadbare mattress on the stone floor, with only a thin blanket for comfort, he soon grew exhausted. ‘The cell was about the size of my living room at home; at one point there were ten guys in it.

‘I didn’t shower for four days, and I was just stinking. I would get a bit of time each day to walk on the prison roof, but it was 50C and I would become drenched in sweat almost immediately. I had no toothbrush for five days either, and no way to keep clean.’

After several days he was eventually brought before a prosecutor to hear the charges against him. Only then did he realise he was being accused of a serious sexual assault.

‘I was in shock. I said “Of course I never did that. That man was fully clothed, and we were in a public bar.” That is absolutely ridiculous.’ 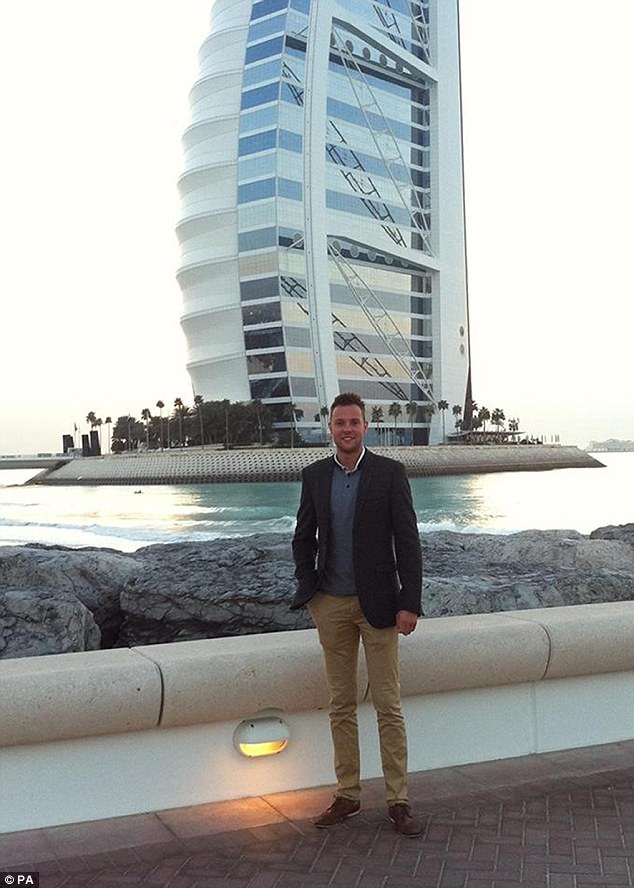 Having had his passport taken away from him, Mr Harron had to remain in Dubai while awaiting trial

Mr Harron spent eight days in prison before his friend managed to arrange bail. He says: ‘When I got out of jail, I went to the prosecutor and was given my case number and a bit of paper with the three charges on it: indecent behaviour, drinking, and sticking up my middle finger in a rude gesture. But when I went to him later, he told me I was being charged for poking this man in the back. I was so confused, and was being told different things.’

Missing his flight to Afghanistan the morning after he was detained also meant Mr Harron had automatically lost his job.

Having had his passport taken away from him, Mr Harron had to remain in Dubai while awaiting trial. The charges were dealt with in two separate hearings but he missed the first one on October 5 because he says there was a mix up with his lawyers. He was found guilty of making a rude gesture and drinking alcohol and sentenced in his absence to 30 days in prison.

However, he was allowed to lodge an appeal without being locked up. He said: ‘The lawyers were a weight off my shoulders at first, but they were of little help – they gave me no information.’

The next day, he contacted campaign group Detained In Dubai.

‘Things only moved after the public found out and Detained In Dubai was a godsend.’

On October 8, at a second hearing to deal with the indecency charge, he pled not guilty. However, by that time, all mention of the serious penetrative sex assault had vanished.

A spokesman for Mr Tabaza’s company Neuman & Esser put out a statement on October 12, saying: ‘During a private visit to a club in Dubai, one of our employees was touched by the suspect on the thigh several times.’

Last Sunday the court found Mr Harron guilty of indecency and sentenced him to three months in jail. A day later, amid a media campaign to bring him home, Mr Harron was cleared by Sheikh Mohammed. He made a special order for Mr Harron’s convictions to be dismissed with full exoneration and his passport was returned. 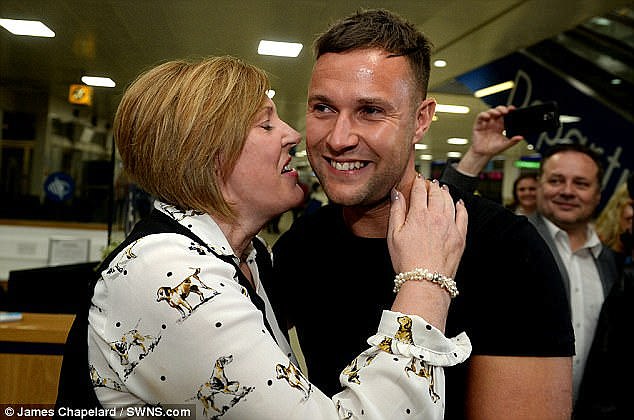 Mr Harron’s mother Patricia, 55, a sales executive, said: ‘I can’t tell you the pain I felt when I was told he was in prison. It was like someone was twisting my gut. It’s terrible. I am just so happy to have him home’

Mr Harron flew home to Scotland on Tuesday and was greeted by his family. They had been advised not to fly to Dubai to support him in case they were also arrested and charged with ‘cybercrime’ – for criticising the state on social media. He said: ‘I was so excited when I saw my family – I just wanted to go home. I just went back to my mum and dad’s, and was so tired. It was really good to be back home.

Mr Harron’s mother Patricia, 55, a sales executive, said: ‘I can’t tell you the pain I felt when I was told he was in prison. It was like someone was twisting my gut. It’s terrible. I am just so happy to have him home.’

Mr Harron has no plans to return to Dubai: ‘The laws there are not great, and people can take advantage. It was my word against his, and it has led to this – it’s crazy.’

Radha Stirling, of Detained In Dubai, said: ‘What happened to Jamie Harron, could happen to any tourist. The UAE markets and promotes itself as one thing, but has not changed the laws to reflect its desire to become more modern.’

The Foreign Office said it had been in contact with Mr Harron, but declined to comment further.

Neuman & Esser said Mr Tabaza did not wish to comment.