Jamie Oliver admits he fills his cookbooks with innuendo

AS the Naked Chef, Jamie Oliver was always serving up a bit of cheek.

Now the TV cook has revealed he has been secretly spicing up his recipe books with sauce for years.

The 42-year-old made the admission during a chat show appearance. He said: ‘To be honest, I have done pervy recipes.

‘I write a couple of naughty ones in each book. I always try.’

Oliver’s innuendo, however, is perhaps a little less subtle than the genteel ‘soggy bottom’ sprinklings beloved by the judges of the Great British Bake Off.

For instance, his latest book, 5 Ingredients, includes the instruction, ‘Rub all over, getting into all the cracks and crannies’, for his Thai-style crispy sea bass, while messy meatballs requires followers to ‘warm your buns’.

The star’s 30-Minute Meals, which has sold more than a million copies since its release in 2010, is similarly suggestive.

In the introduction, the father of five tells would-be chefs: ‘All you have to do is follow my instructions, move quickly and enjoy the ride!’.

He adds: ‘Like making beautiful love, you might not always get things right first time around, but the benefits when you finally crack it are incredible.’

His stewed fruit recipe suggests: ‘If your plums look soft and juicy, take them out.’ And his Tuscan salad demands you ‘squeeze everything with your hands…’ 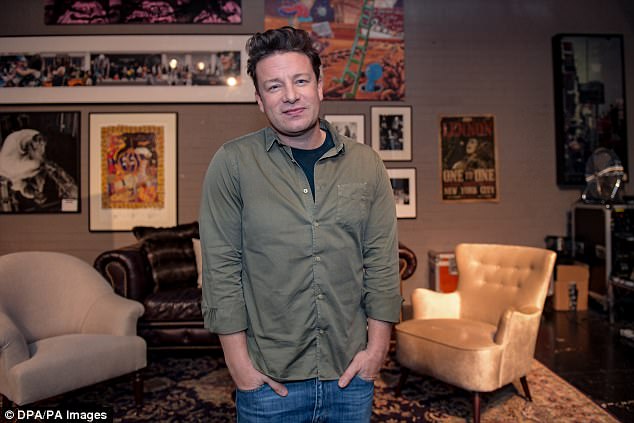 The 2012 15-Minute Meals contains even more cheeky comments. ‘I can’t tell you how hard it’s been,’ Oliver brags in the foreword. His recipe for British burgers instructs readers to ‘get the baps out’ while Swedish lamb meatballs require cooks to ‘take balls with your wet hands’.

Of course, no sausage recipe would be complete without a dash of double entendre and Oliver’s gnocchi requires a ‘squeeze of the sausage’.

His 2014 Jamie’s Dinners: The Essential Family Cookbook tells readers the slow-cooked lamb ‘will leave you with nice, firm tasty meat and juicy, gooey, dumplings’, while peppers are described as ‘right old tarts – they get about a bit’.

Essex-born Oliver, who was talking to Sky 1’s Russell Howard, said: ‘If you’re talking about food to arouse, I think anything made can be lovely.

‘What’s the best food? Keep it light, not spicy, you don’t want anything tough to chew on, something soft and easy.’