We now spend more than £4billion every year on thousands of greasy, fatty, salty tonnes of the stuff. It clogs our arteries, fuels the national obesity epidemic and has even led to the panicky imposition of ‘fried chicken exclusion zones’ around secondary schools to try to wean pupils off it.

Pretty much every high street has at least a couple of fried chicken outlets nestled between betting shops, coffee shops, charity shops and mini cab offices, pumping out the seductive smell into the street.

We now spend more than £4billion every year on thousands of greasy, fatty, salty tonnes of fried chicken

Usually, at least one of the outlets is the original purveyor of this particular fast food — Kentucky Fried Chicken — with its distinctive red and white livery, and beaming, bespectacled Colonel Sanders logo.

So far, so unappetising. Or so you would think. But when 646 of Britain’s 900 KFC outlets (most of which are franchises) started closing at the weekend after an unfortunate glitch over chicken supplies — a switch to a new delivery firm coincided with a motorway gridlock — there was an astonishing reaction.

Some customers reported the closures to the police. Others complained to their MPs. Several even sought advice from the Citizen’s Advice Bureau.

KFC staff resorted to desperate measures to keep loyal customers happy, secretly buying chicken from local butchers so their outlets could remain open and the cash pouring in.

Some branches which had managed to secure supplies were mobbed by frantic customers who’d driven miles to get their fix.

One wag purchased a full chicken dinner, complete with fries, corn on the cob and baked beans, then offered it for sale on eBay — for anyone who was ‘tired of being clucked around’.

You see it turns out that there’s far more to deep fried chicken than a cheap and tasty meal awash with heart-stopping trans fats and alarming levels of salt (usually accompanied by fries and a large sugary drink).

Over recent years, what used to be a staple dish of the hard up has developed a certain urban cachet. It has become cultish, cool, even — not least because it laughs in the face of the healthy, clean, eating brigade. 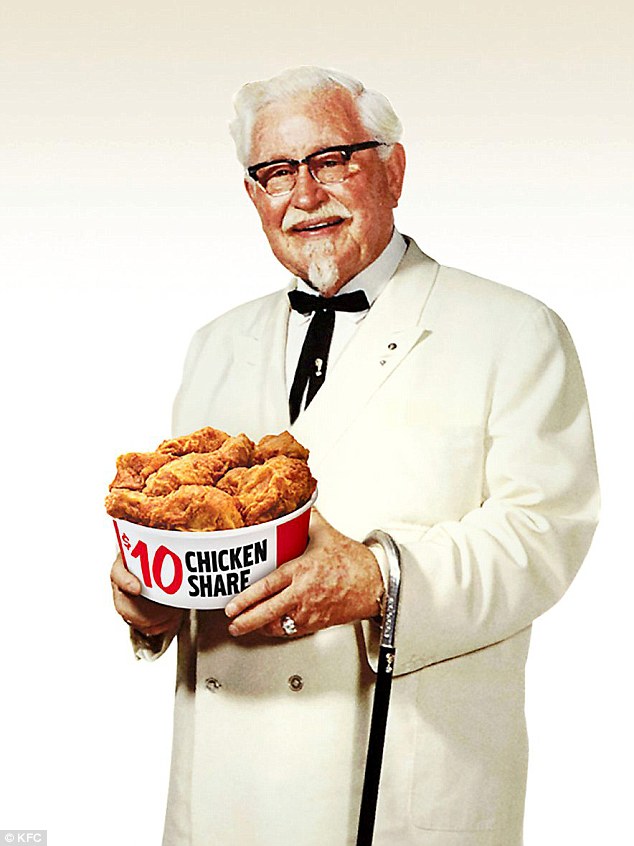 KFC started in in the Great Depression in North Corbin, Kentucky in 1930, with Harland Sanders – the ubiquitous KFC ‘Colonel’

There are YouTube raps declaring allegiance to various chains, blogs dedicated to the subtle differences in flavour and meal deals, artfully-lit Instagram photos showcasing the perfect golden glow of shimmering fat — and even a posh coffee table book for fans to enjoy at home: Chicken: Low Art High Calorie.

There are even fried chicken ‘festivals’ planned for later this year in London and Manchester, celebrating the wonders of chicken nuggets, both breaded and battered, in all their glory.

Which, given the health implications (there are a staggering 900 calories in a KFC Boneless Banquet for One) — let alone the dismal outcome for the hundreds of millions of chickens that end up in deep-fat fryers each year — is all pretty alarming.

Can it be that barely 50 years ago, we were all fried chicken virgins?

It all started in the Great Depression in North Corbin, Kentucky in 1930, with Harland Sanders — aka the ubiquitous KFC ‘Colonel’ — whose previous incarnations included school drop-out, farmer, steamboat pilot, engine stoker and insurance salesman.

Then, crucially, he became a service station manager selling petrol and serving fried chicken dinners to his own ‘finger lickin’ recipe to passing customers in his sitting room. When a new motorway was built diverting all the traffic and ruining his business, he had a brainwave — franchised ‘Kentucky Fried Chicken’ and opened the first branch in South Salt Lake, Utah, in 1952.

A decade later, there were more than 400 stores across America and Canada, and Sanders was made a ‘Kentucky Colonel’ in recognition of his promotion of the state.

In 1965, and thanks to his business partner and friend Raymond Allen, who owned a number of takeaway outlets, the Colonel’s’ recipe for ‘take home chicken’ — with a coating made up of a blend of 11 herbs and spices — made its way to Fishergate in Preston.

There, sandwiched between a Wimpy Bar and a branch of Timothy White’s chemists, the UK’s first KFC opened — and everything changed. 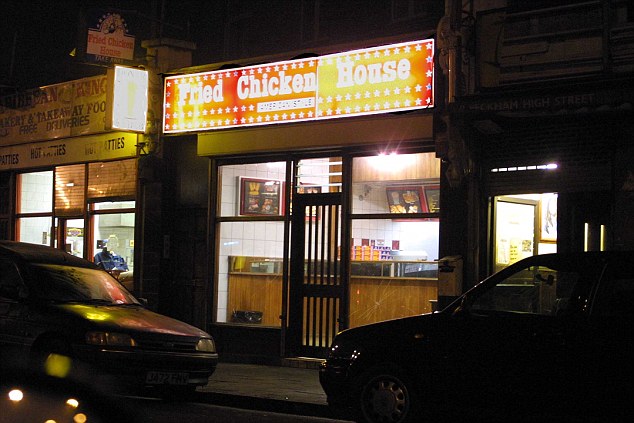 Success was both instant and spectacular, all thanks to Raymond who helped establish the brand across Britain before retiring to the Channel Islands to count his millions in 1973. (In 2015, he and his wife Shirley branded KFC food ‘dreadful’ and vowed never to eat it again.)

The British public don’t agree and over the past couple of decades fried chicken has really taken off, becoming the fastest growing of all fast foods.

Now it’s so popular that non-chicken outlets such as McDonald’s and Wimpy offer chicken options of their own.

A documentary in 2015, The Billion Dollar Chicken Shop, revealed the chickens lived for just 35 days, in vast numbers in smelly barns before being gassed, chopped into nine pieces and sent to warehouses in large trays ready for the basting, dipping and deep frying.

But they are doubtless kept in better conditions than the chickens used by many of the KFC imitators operating from low — cost premises, all anxious for a slice of the deep-fat fryer action but cutting corners to achieve it.

And competition is not always healthy. With so much choice, outlets actively compete to offer the biggest, fattiest, saltiest meals for the least money possible.

So a chicken sandwich meal including fizzy drink can cost under £1 and contain 1,400 or more calories, three-quarters of the recommended daily intake for a woman and two-thirds of that for a man.

Meal deals aimed at kids and teenagers (one in five-fast food outlets is within five minutes’ walk of a school) have contributed to childhood obesity which, according to the Royal College of Paediatrics and Child Health, has been rising sharply, with a third of children leaving primary school either obese or overweight.

After learning that the London Borough of Tower Hamlets, which has the sixth highest rate of childhood obesity in the country, had a reported 42 chicken shops for every secondary school, London Mayor, Sadiq Khan, took action. Last year he announced a plan to impose exclusion zones — banning new outlets from opening up within a 400-metre radius of a school.

Other boroughs are also fighting back — insisting fried chicken shops cannot occupy more than five per cent of shop fronts. But the reality is that it’s a losing battle.

Traditionally, there was always a strong demographic trend: fried chicken outlets thrived in lower middle class or working class areas, particularly in the years after the financial crash of 2008.

But today, it has crossed the class divide. We’re all eating it.

Ethnic communities embrace the thousands of Halal outlets, school children crave it and the middle class are embracing a whole roost of new ‘top end’ joints, with hipster names such as Ma Plucker, Mother Clucker, Paul and Cara’s Bird, and perhaps the most up-market of all, Chicken Shop, founded by Nick Jones, who also launched Soho House, the glitzy, private members club in London.

Surely it’s only a matter of time before fried chicken kicks out chicken tikka masala as our new national dish.