Jane Sanders had to stand in for her man, Sen. Bernie Sanders, at a Thursday night campaign event turned dance party in Des Moines, Iowa.

‘I just fell in love with his ideas. Later, the man,’ said Jane Sanders, talking about the first time she saw the Vermont senator speak, back in 1981, when he was running for mayor of Burlington. ‘And it felt incredible in the audience.’

With the 2020 hopeful stuck back in Washington sitting through the end of President Trump’s Senate impeachment trial, the Sanders campaign has come up with alternative programming – on Thursday it was an apperance by the potential future first lady and a performance by the Los Angeles-based band Las Cafeteras.

Jane Sanders made a personal pitch for her husband, Sen. Bernie Sanders, in Des Moines, Iowa Thursday night, as the Vermont senator is stuck in Washington for President Trump’s impeachment trial 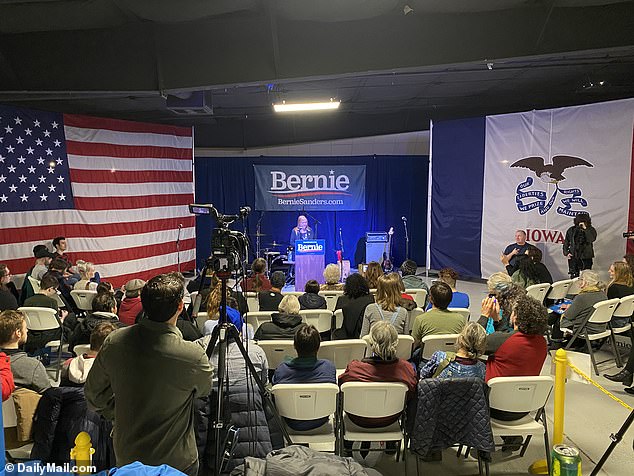 ‘The Bernie Sanders who, as a college student, was arrested for protesting segregated housing in the community and at the University of Chicago is the same Bernie Sanders now, and the President Bernie Sanders that will fight institutional racism, reform our criminal justice system and announce a humane immigration policy,’ she told the crowd.

She said her husband was ‘as honest as the day is long and as consistent as the sun rises.’

‘I can tell you he still embodies everything I believed in. And I’m really proud, not only to be at his side professionally, but to share my life with him as a husband and to see him be an incredible father and grandfather,’ she continued.

One of the couple’s sons, Dave, and two grandchildren, were in the audience.

She said he was an ‘example of how to lead a meaningful life and one with a sense of vision and purpose and care and compassion.’

‘So I recommend you support him,’ she said to laughs.

The possible FLOTUS’ warm-up act, Las Cafeteras, started the night with the song ‘This Land is Your Land,’ played at Sanders’ events during the 2016 cycle too.

In another song, the group referenced Emmett Till, Trayvon Martin, Standing Rock and Sandra Bland, in a tune about those who were killed and hurt unjustly.

They also played ‘If I was president’ and they had the audience do a call-and-response to say ‘tio Bernie.’

The group came back on after Jane Sanders made her pitch.

And as they played an encore, a Conga line broke out.

Thanks to Trump’s impeachment trial, the senators running have had to get creative in order to keep their message resonating through the Hawkeye State while stuck in Washington with just days before Iowa’s first-in-the-nation caucuses.

The duo continued on the trail Thursday once it became clear that Warren would have to nix several scheduled rallies.

Warren has deployed a number of surrogates to the state too, including former 2020 hopeful, ex-HUD Director Julian Castro, who tossed his support behind the Massachusetts Democrat when he dropped out. 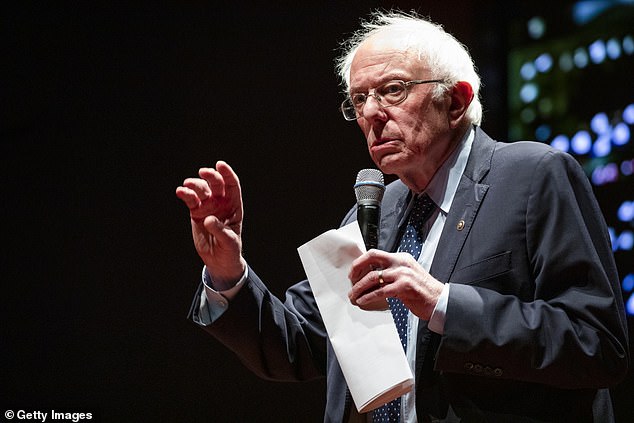 Sen. Bernie Sanders is stuck in Washington as a juror for President Trump’s Senate impeachment trial as the Iowa caucuses loom

A ‘Hotdish’ is a Minnesota casserole – that generally includes meats, cheeses and starches – creating a hot, bubbly caloric mass.

The Sanders campaign had Rep. Alexandria Ocasio-Cortez stump in Iowa for the Vermont senator last weekend.

Going into the final weekend before the caucuses, two other members of the so-called ‘squad’ – Reps. Ilhan Omar and Rashida Tlaib – are holding Iowa events in Sanders’ stead.

Sanders is supposed to hold a Des Moines rally Friday night with the band Bon Iver, but will likely miss that too if impeachment proceedings go late into the night, which is expected.

Jane Sanders told the crowd that her husband hoped to get to Iowa sometime during the weekend.