Janet Jackson’s bassist has accused Qantas of racism claiming the airline did not permit him to take his guitar on board, despite allowing ‘white passengers’ to do so.

Eric Smith said he was trying to board a flight from Brisbane to Sydney with his instrument on Saturday morning when he was told he had to check the item instead.

He was also asked to sign a waiver stating the airline wouldn’t be responsible for any damages.

The musician, who was travelling to Australia to perform at RNB Fridays Live with Jackson and rapper will.i.am, claimed white passengers with instruments boarded the plane with no issue.

Smith spoke out about the incident in an interview with Melbourne’s KIIS 101.1’s Jase & PJ on Monday morning, in the wake of will.i.am’s row with the airline.

Smith, who said the group has flown with Qantas ‘every single flight’, said he remained calm despite his frustration and tried to reason with the employee

‘I’m sitting at the gate area and the guy comes to me with a piece of paper said, “I need you to sign this and I need you to give me your guitar”,’ Smith said.

‘I was like, “for what reason?” and he said, “well it’s a waiver for damages because we need to stick your guitar under the plane and we’re not responsible for damages.”‘

Smith claimed at that moment he saw other passengers, who were white, boarding the plane with their instruments with no issue.

When he asked why he wasn’t allowed to take his guitar as well, the attendant  ‘basically told me that wasn’t my concern.’

Smith, who said the group has flown with Qantas ‘every single flight’, said he remained calm despite his frustration and tried to reason with the employee.

‘I wasn’t trying to be that guy. I wasn’t like, “let me speak to your supervisor, what’s your name?” I never went there with the guy. I was just like, “sir, I’m just trying to work.”‘

In a statement to Daily Mail Australia, Qantas said the crew’s response to Smith was standard procedure.

‘When musicians bring oversize instruments onboard like guitars, our crew are required to ensure that this has been pre-arranged. So there’s nothing out of the ordinary about our crew checking that this has been done. We have not received a formal complaint from Mr Smith about this flight,’ a spokesperson said.

Smith addressed the incident on Twitter at the time urging black musicians to boycott the airline. 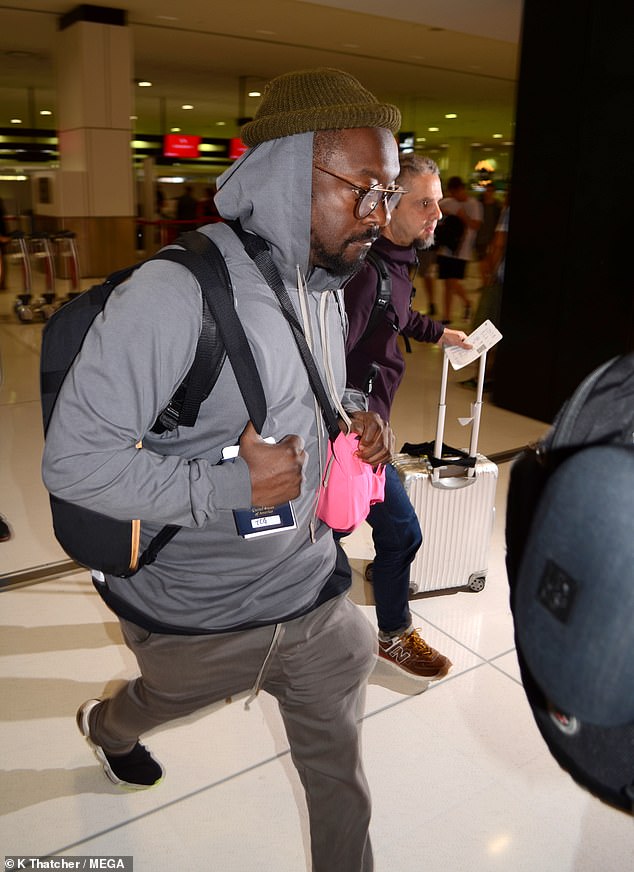 will.i.am (pictured leaving Sydney Airport on Sunday) took to Twitter on Saturday saying he had been a victim of racially-motivated abuse after the employee called AFP officers on board after asking him to stow away his laptop 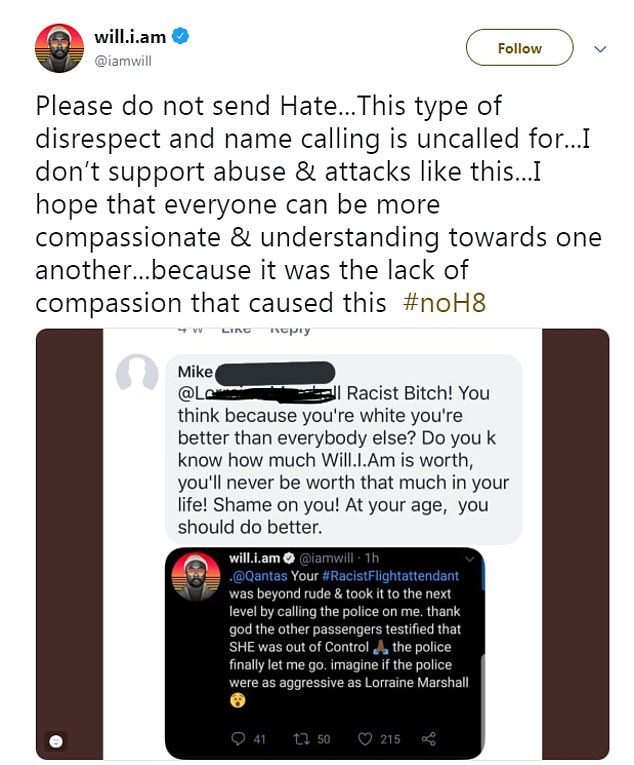 He later asked his followers not to send ‘hate’ saying ‘a lack of compassion’ was the root of the problem.

‘I’m really upset at the way I was treated by a gate agent. Black musicians , DON’T fly on @Qantas @QantasUSA. He tried to make me check my guitar, & sign a waiver while he’s letting WHITE musicians walk right past us taking there’s onboard. Lost my window seat too! I’m done!!!’ he tweeted.

Smith shared photos of the cabin showing another guitar stowed in the overheard compartments.

Smith’s allegations follow will.i.am’s claims that a ‘racist’ flight attendant ‘sent the police after him’ because he was wearing noise cancelling headphones during a PA announcement on flight to Sydney.

The woman received an onslaught of abuse on social media after the rapper released her full name to his 13 million Twitter followers.

He later asked his followers not to send ‘hate’ saying ‘a lack of compassion’ was the root of the problem.

When asked in the interview if it was fair for him to publicly identify the employee, Smith replied: ‘absolutely.’

On Monday, the Flight Attendants Association of Australia defended the employee saying the woman was following safety protocols and should not be ‘shamed’ for doing her job.

‘As employees, crew are bound to follow their employer’s direction. It seems that in doing this, crew are being vilified and ­attacked on ­social media,’ FAAA Secretary Teri O’ Toole told The Australian. 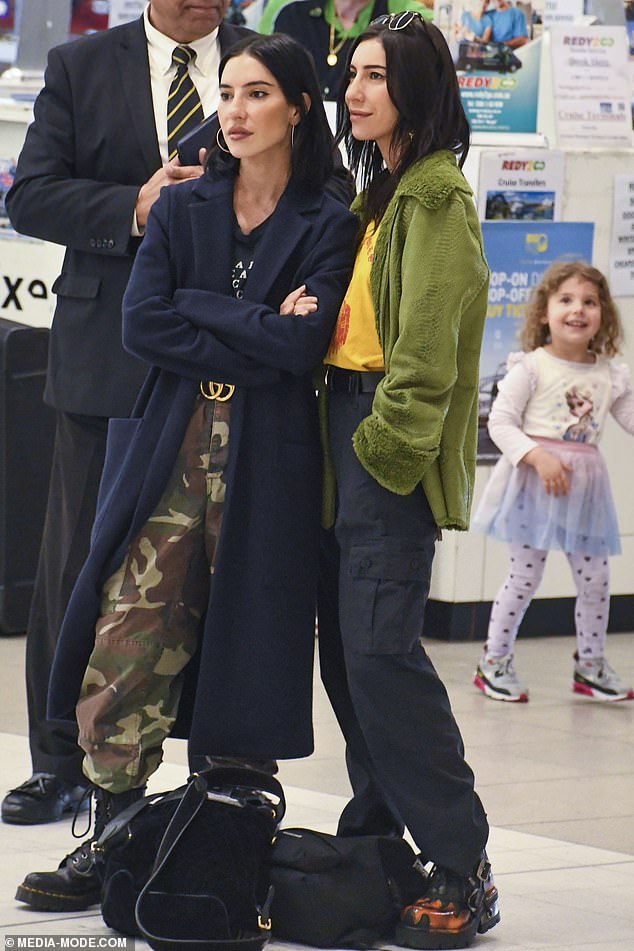 Ms O’Toole’s comments come after the flight attendant was accused of discrimination for a second time by The Veronicas’ Jess and Lisa Origliasso, who were booted off a flight from Sydney to Brisbane in September 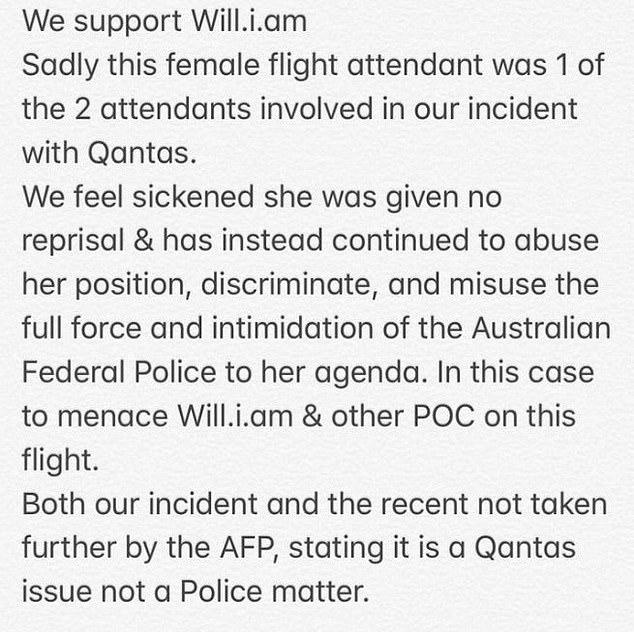 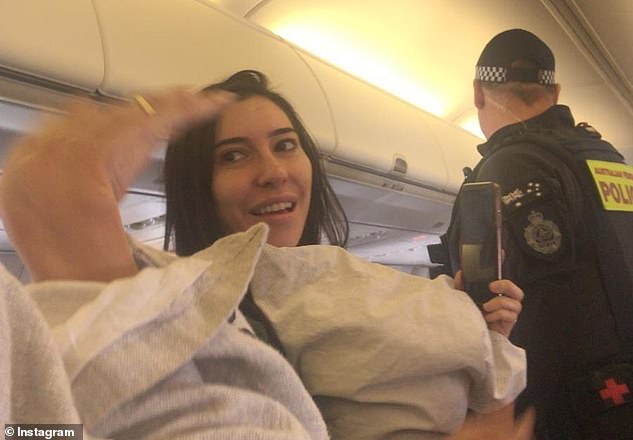 In September, Jess and Lisa Origliasso were removed from a Sydney to Brisbane flight after a disagreement with staff over luggage and claim the same flight attendant was involved

‘It seems like a pretty simple request and it’s there to protect passengers.

‘No one should be named and shamed for doing their job and it seems the welfare of the crew ­involved is not being considered by the celebrities involved.’

A staff memo obtained by The Daily Telegraph, revealed Qantas is now asking the rapper to retract his comments.

‘The tweets claimed poor treatment from crew and discrimination on the basis of race. We replied that there appeared to be a misunderstanding on board that was exacerbated by the fact will.i.am was wearing noise cancelling headphones. the memo states.

‘We rejected claims of racism and have since asked will.i.am for a retraction of that claim. We fully support our crew and the great work they do ensuring safety of all those on board.’

Ms O’Toole’s and Qantas comments come after the flight attendant was dragged into the fray a second time when The Veronicas released a statement in support of the rapper on Sunday.

‘Sadly this female flight attendant was 1 of the 2 attendants involved in our incident with Qantas.

‘We feel sickened she has given no reprisal & has instead continued to abuse her position, discriminate, and misuse the full force and intimidation of the Australian Federal Police to her agenda. In this case to menace will.i.am & other POC on this flight. 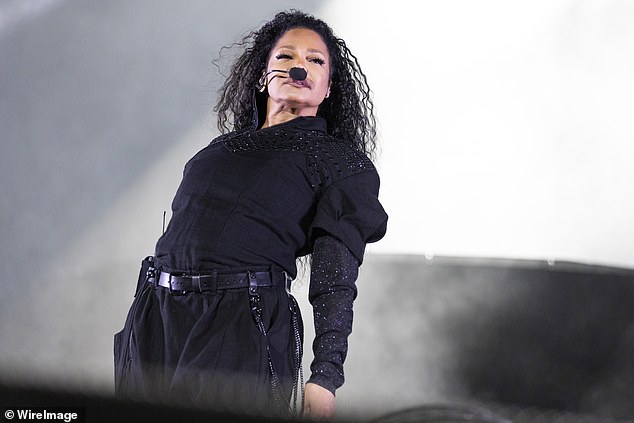 Both Janet Jackson and will.i.am travelled to Australia to perform at the RNB Fridays Live festival this weekend

‘Both our incident and the recent not taken further by the AFP, stating it is a QANTAS issue not a police matter. ‘

Jess and Lisa Origliasso were themselves removed from a Sydney to Brisbane flight in September after a disagreement with staff over luggage.

The sisters claimed they asked a flight attendant for help manoeuvring a bag in the overhead locker, but were refused because it was against company policy.

A fellow passenger helped instead but after they were seated, they claimed two flight attendants came over and lectured them, then ordered them off the plane.

The airline also rejected allegations the situation had ‘anything to do with race.’

will.i.am claimed his treatment on board resembled a ‘police state’ after Australian Federal Police officers were called to meet him on the plane. 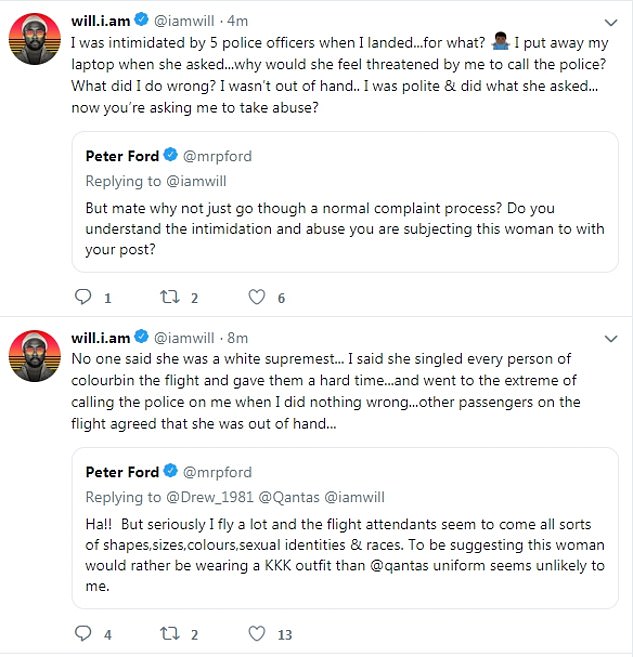 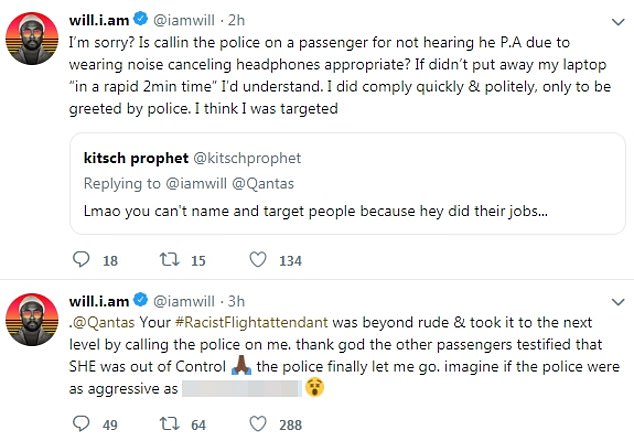 At the time, he said he was wearing noise-cancelling headphones while he mixed music on his computer as the plane was coming in to land.