The January 6 committee is referring Donald Trump to be criminally charged on four counts, the panel announced on Monday after a unanimous vote.

The recommended charges were obstruction of an official proceeding, conspiracy to defraud the United States, conspiracy to make a false statement and ‘inciting,’ ‘aiding’ or ‘assisting’ an insurrection.

Monday’s hearing also saw new damning testimony from ex-Trump aide Hope Hicks, who testified that he ‘refused’ to put out a statement warning against violence in the lead-up to January 6.

Rep. Jamie Raskin, who led a subcommittee looking into criminal recommendations for the panel, also said a criminal referral would be sent for pro-Trump lawyer John Eastman.

He pointed out that the final charge, if Trump is found guilty, triggers ‘automatic grounds for disqualification from ever holding public office again, at the federal or state level.’

‘The President has an affirmative and primary constitutional duty to act to take care that the laws be faithfully executed. Nothing could be a greater betrayal of this duty than to assist in insurrection against the constitutional order,’ Raskin said.

Lawmakers made the stunning decision during the panel’s final public hearing before the select committee is dissolved at the end of this year.

‘The dangerous assault on American constitutional democracy that took place on January 6 2021 consists of hundreds of individual criminal offenses. Most such crimes are already being prosecuted by the Department of Justice,’ Raskin said.

‘Ours is not a system of justice, where foot soldiers go to jail and the masterminds and ringleaders get a free pass.’

No US president has been the subject of a criminal referral by Congress until now.

‘At the heart of our republic is the guarantee of the peaceful transfer of power,’ said Vice Chair Liz Cheney at the outset of the hearing. ‘Every president in our history has accepted this orderly transfer of authority except one.’

‘In addition to being unlawful as described in our report, this was an utter moral failure and a clear dereliction of duty,’ she said at another point.

The meeting is a culmination of more than a year’s investigative work and nine public hearings. 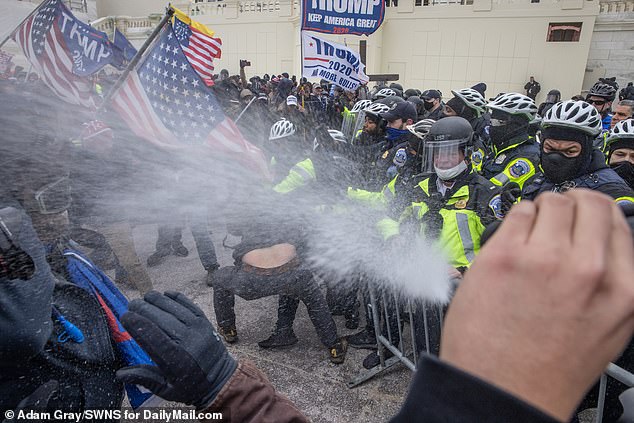 Lawmakers on the panel have heard from dozens of witnesses – mainly Republicans – and obtained thousands of pages’ worth of correspondences and other documents that paint a picture of Trump’s efforts to overturn his 2020 election loss.

Cheney said, ‘among the most shameful of this committee’s findings is that President Trump sat in the dining room by the Oval Office watching the Capitol riot on television.’

‘If this is a nation of laws and democracy, this can never happen again,’ Chairman Bennie Thompson said in his opening remarks.

Before presenting the committee’s findings, Thompson introduced ‘a video presentation of some of the key evidence investigation has uncovered.’

In one instance, Lofgren said a witness told the panel that she ‘was offered potential employment that would make her “financially very comfortable” as the date of her testimony approached by entities that were apparently linked to Donald Trump and his associates.’

The offer never materialized, the Democrat said, but added that the panel has received additional testimony ‘from new witnesses who have come forward to tell us about their conversations with ex-President Trump on this topic.’

For several members – including both Cheney and Adam Kinzinger of Illinois – it’s their final public event as House legislators.

Throughout the public phase of their probe, the committee has sought to prove that the former president was well aware that he lost to Joe Biden when he was publicly promoting his election fraud claims – and that members of his team reminded him of that fact multiple times.

Additionally, they accused Trump of using his fraud theories to fundraise from his supporters, therefore knowingly misleading them.

And lawmakers say the Capitol riot was not a spontaneous outbreak of violence but rather, as Vice Chair Cheney said at one early hearing, Trump and his allies’ ‘last stand’ to try and upend a democratically held election.

The Justice Department is already probing the former president’s alleged plan to overturn the 2020 election.

An ongoing federal investigation into Trump and his allies’ efforts to upend Georgia’s electoral count recently heated up with the appointment of Special Counsel Jack Smith, a former Hague prosecutor who the ex-president has repeatedly attacked since taking on the new role.